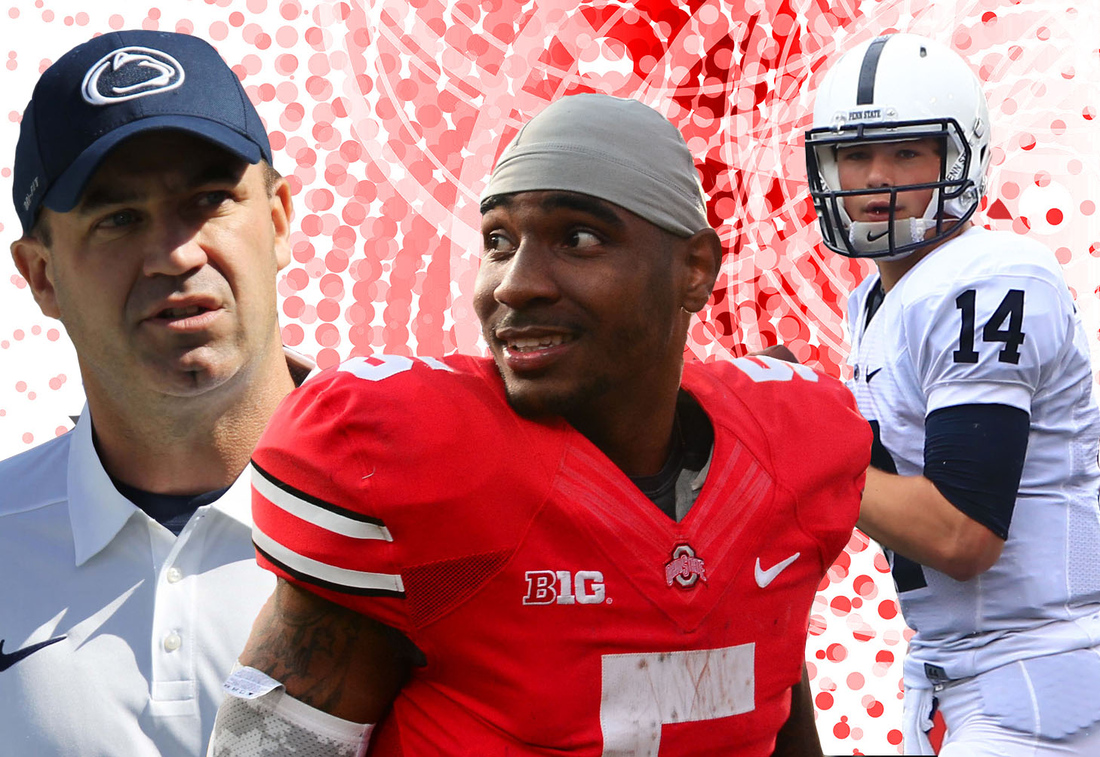 1. Hackenberg’s Poise - Christian Hackenberg has performed admirably during several "firsts" this season – first collegiate game, first road game, first night game, etc., etc. However, this will be the first time he’s played in one of the most hostile environments in all of college football – and with an 8 p.m. kickoff at that, he will need to play like a seasoned upperclassman rather than a true freshman for Penn State to have any chance of escaping Columbus with a victory. During times when he’s played like a true freshman, the offense has stalled since the run game just hasn’t performed well enough to carry the offense. If the offense can’t maintain drives, the defense will get worn down pretty easily by Carlos Hyde and will be too gassed to catch Braxton Miller once he gets loose.

2. Tight End Involvement - Many Nittany Lion fans prematurely anointed Penn State as "Tight End U" after an impressive season by the unit in 2012. Their overall production is down this season, but has picked up the past few games as Hackenberg becomes more comfortable throwing to the tight ends. Ohio State has struggled with its pass defense throughout the season, and it will be crucial for Penn State to identify and try to exploit any mismatches by getting the ball to Jesse James, Kyle Carter and Adam Breneman. Plus, you just have to believe Bill O’Brien has been saving a few new tight end-friendly packages for this game.

3. A Consistent Pass Rush - My biggest fear for Saturday is that Braxton Miller just goes off and has one of those games that places him back in the Heisman conversation. It could very well happen between his incredible abilities and the weaknesses of the Nittany Lions defense. Penn State’s defensive line played tremendous against Michigan after being non-existent during several stretches of the season. They will need to be after Miller early and often to slow down a very dangerous Buckeyes defense. This means finding a way to apply pressure from all angles to get Miller rattled. Otherwise he will be able to scramble around the pocket and find the open man or just tuck it and run for big gains all night.

After trailing at halftime the last two games, The Ohio State Buckeyes will look to start off a little faster against Penn State on Saturday night in The Horseshoe. While Ohio State has used second half comebacks to defeat Northwestern and Iowa, fans will be looking for a little more in the national ABC primetime telecast. The Buckeyes will be looking not to repeat the same fate as 2008 when Penn State came into Columbus for a night game and left with a 13-6 victory.

The biggest issue for the Buckeyes lately has been the secondary, or lack thereof. The void left by Christian Bryant after his injury late in the game to Wisconsin has been yet to filled, not only in terms of performance but leadership as well. The issues were compounded last week against Iowa when Bradley Roby was ejected in the first quarter for targeting. The bright spot so far for the much maligned secondary so far this season has been the play of Doran Grant. The junior from Akron is tied with Roby for the team lead with two interceptions and has had nine passes defensed so far this season.

For as many questions as the Ohio State pass defense has had so far this year, the run defense has picked up the slack. In the other game under the lights in Columbus this year, Ohio State held running machine Wisconsin to just 104 yards on the ground. For the season the Buckeyes are only allowing opponents 92.4 YPG on the ground, and will look to slow down the trio of running backs that Penn State has. In six games so far this year, Zack Zwinak has led the Nittany Lions three times in the rushing yards, Akeel Lynch has led them twice, and Bill Belton has topped the team once.

The Buckeyes have shown that when they do get a complete game from the defense there are very few teams in the country that could beat them, because the offense is so efficient. So far this season the Ohio State offense has scored 31 points or more in every game, and the only time they failed to crack 400 total yards was in the victory against Wisconsin.

The Penn State defense has had mixed results this year, dominating teams that they should have in non-conference play, but also showing noticeable holes against UCF, Indiana, and Michigan. It could be make for a long night for the Nittany Lions defense if the Buckeyes are able to establish the run early with Hyde and Miller which would open up some play-action for Miller to hit the plethora of targets he has at his disposal through the air.

by Brett Ludwiczak and Cari Greene 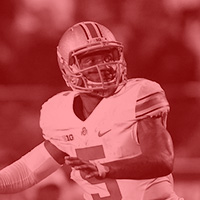 The player that looked to benefit most from the bye week before the Iowa game was Braxton Miller. In his best game so far this season, Braxton dissected the Hawkeyes, completing 22 of 27 passes for 222 yards and throwing two touchdown passes. XBRAX360 also didn't look as tentative against Iowa running the ball, notching his first 100-yard rushing game of the season. After seeing what Blake Bortles, Nate Sudfeld, and Devin Gardner did to the Penn State defense, Miller could be looking at a big night. 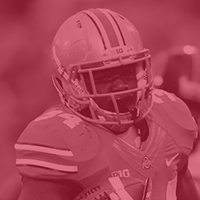 After missing the first three games of the season due to suspension, "El Guapo" has really burst back onto the scene the last two games for the Buckeyes. The Ohio State comebacks have been spurred on by Hyde, who has 50 carries for 317 yards and five touchdowns in the last two contests. After halftime last week Hyde had 106 yards rushing, including the 19-yard touchdown run that gave Ohio State the lead for good. This week provides another tough defensive test for Hyde, but with the way he is running lately it's hard to see teams keeping him under 100 yards and out of the endzone. 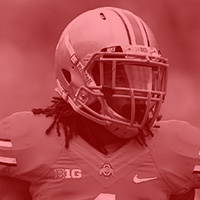 Saturday night could be a defining game in Bradley Roby's Ohio State career. After being named a All-American following last season, Roby hasn't quite lived up to the hype this year. After Wisconsin's Jared Abbrederis was able to haul in 10 passes for 207 yards, and the early ejection of Roby last week, Roby has a chance for redemption should he be able to lockdown Christian Hackenberg's favorite target. So far this season Allen Robinson has four 100-yard receiving games, and can make even the most ridiculous of catches. If you need anymore evidence about that, just ask Michigan about Robinson's ability to go up and get the football. 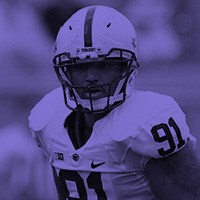 Rated preseason by some NFL scouts as one of if not the best 3-technique senior DT in the nation, Jones has been putting together a monster season for tne Nittany Lions—perhaps most impressively because he hasn’t had the amount of talent around him in the other front six that we Penn Staters are used to. Despite being the focus of most offensive line coaches when he’s in the game, Jones has racked up a monster 39 tackles (24! Solo) in Penn State’s six games, and has had 8.5 TFLs in all games. If he builds on his monster Michigan game (9 tackles), he may wreak some havoc on the Buckeye o-line and cause Miller to scramble some (not that that’s really a problem for Braxton). 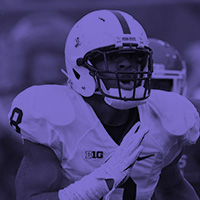 The most obvious possible choice on this list. Robinson was, of course, the Big Ten receiver of the year last year, and has picked up where he left off in 2012, leading the conference in receptions per game (7.2) and is second to Michigan’s Jeremy Gallon in yards per game (117.5—and of course, Gallon’s video-game-like performance against Indiana last week kinda skews things a bit). He’s only got five TDs on the year, but is a threat even when simply targeted—because oftentimes the only way to stop him coming down with the ball is via pass interference, and the zebras know it. His one issue is fumbling after the catch—he’s had two so far this year, which may not seem like a lot, but for an elite receiver is something for him to work on. I’d expect Roby to be on him like glue all night, with him getting a few targets but not as many as Christian Hackenberg might like—which should leave guys like Brandon Felder and Geno Lewis open themselves. 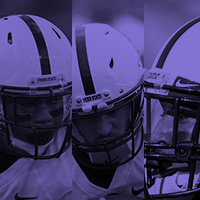 The obvious choice for number three would be QB Hackenberg. But I’m not going obvious here – because it’s a night game in the Shoe, and I’m expecting freshman mistakes. After all, when we play in Columbus, we’re Pick Six University, right? So in order for Penn State to keep it close, we need to get the ground game going, and that’s where our running backs come in. I can’t pick just one, because, quite frankly, I have no idea who’s going to start. Most of the season, there’s been big, fat "OR"s in between all three TBs, with Zwinak getting the ultimate nod but the others getting touches throughout the game; against Michigan, though, Zwinak had a potentially crucial fumble recovered for a TD by Michigan’s D, and was benched for Belton—and Belton turned in a stellar performance the rest of the night, culminating in both the critical fourth down conversion in the fourth OT, and the game-winning touchdown in that same overtime possession. I’d expect Belton to start, but I wouldn’t be surprised to see Zwinak and Lynch get serious touches in the game, even if the other backs are doing well.