Former Ohio State defensive tackle Johnathan Hankins sits down with Land-Grant Holy Land to discuss the feeling of going undefeated, the differences between college and the pros, as well as his expectations of the current Buckeyes.

After leaving school following his junior season, Jonathan Hankins became a second-round pick of the New York Football Giants. Despite the Giants' depth along the defensive line, the 49th overall pick in the 2013 NFL Draft is expected to become a part of the team's "NASCAR package" as they rotate lineman on and off the field. The former Buckeye took some time out of his day to discuss the feeling of going undefeated, the differences between college and the pros, as well as his expectations of the current Buckeyes.

I’d say that the game tempo is a big difference now that I’m in the NFL. Everyone is quicker, smarter, naturally-gifted, and freaks of nature. You have to get used to everyone being the best at their position.

Being at Ohio State made the adjustment easier. I wouldn’t have been ready for the NFL if it wasn’t for Ohio State. The time you put into it, the coaching, and the schemes are pretty much the same. There was a comfortability with everything. On top of that, the way Coach Meyer and Coach Tressel teach us makes the transition easier.

Since every game at Ohio State isn’t a big game, where you may be playing an easy game against a small school instead of the likes of Michigan and Wisconsin every week, what is the biggest difference between in your preparations in college and in the NFL?

Every game in the NFL is like national championship week. Everybody can beat you. They are getting paid to win games like we are. You just have to work hard every single day and try to be your best. The biggest difference is the competition, which we didn’t always have when we played a smaller school. Obviously, I don’t have class anymore, so football is all I do. I’ll work out, lift some weights, take my playbook home and study, and watch film on my iPad.

If you happen to get a minute of free time, do you have any business venture you’d like to pursue or charities you’d like to work with?

There are a couple charities I work with in the New Jersey area, but I’m not as involved as I’d like to be. I’m just staying focus on football for now, but there’ll be a time when I’m really active with charities. When the season is over, I want to finish school. I’m planning on going back to Columbus to schedule my classes during our bye week. I majored in Criminology and I’m only a few classes away from getting my degree.

Leading up to the draft, what kind of feedback were you getting from teams?

Most teams I talked to had me going 25th-30th, but I dropped to the second round. Truthfully, I was just happy to get drafted and get an opportunity to play football in the NFL. I really didn’t care where I got drafted. Leaving Ohio State was the hardest thing I’ve had to do, but after I talked to my family, the coaches, and I got good info from my agent, I knew it was the right time.

What was your first reaction, besides relief, when the Giants drafted you?

I just knew I was going to a great situation. Their defensive line has been on of the best in football for the past few years, so I knew it was going to be a great fit for me. I was just hoping I could wreck some havoc with Jason Pierre Paul and Justin Tuck. The scheme is the same as what I ran at Ohio State, because both run a 4-3 defense. The coaching is the same, the terminology is generally the same, and so on.

Were there any other teams that said they’d draft you if you were available?

I heard from the Steelers, the Patriots, the Ravens, and the 49ers. They all have the same style defense, so I would have been a good fit with whichever one I went to.

The NFL was always a top goal of mine. I came to Ohio State because they prepare you for the next level. I didn’t think I’d be good enough or be able to leave after my third year, but I always wanted to go to the NFL.

Now that you’re in the league, you probably run into former Buckeyes all the time. Do you keep in touch with any of your former teammates?

I make sure to talk to Will Smith, Cam Heyward, and John Simon, since they play on the defensive line. We’re just friends, so it’s not always a schematic thing. I try to talk to everyone that’s a Buckeye, especially the seniors this year, since we came to Columbus at the same time. We’re always going to be friends, but we’re like brothers, too. I don’t want to be one of those people who plays, leaves for the NFL, and then is never heard from again.

Do you keep up with your former coaches, as well?

I talk to Coach Vrabel and Coach Meyer, and I find out how I can help the team. I try to coach ‘em up. The team has some great leaders, though.

Since you played under both coaches, is there a different feeling under Meyer than there was under Tressel?

The mindset now is that the best players are going to start. Tressel was that way with a few players, but there was a bit of seniority if the players were pretty even. They are both great coaches, though.

Speaking of a position battle, if you were in Meyer’s position, would you start Braxton Miller or Kenny Guiton?

I’m just happy that it’s not my job to say who should start. I think they’re both great quarterbacks and could both lead the team, but I’d go with Braxton. Kenny put up great numbers when he got his chance, but Braxton brings something to the field that you always have to worry about. 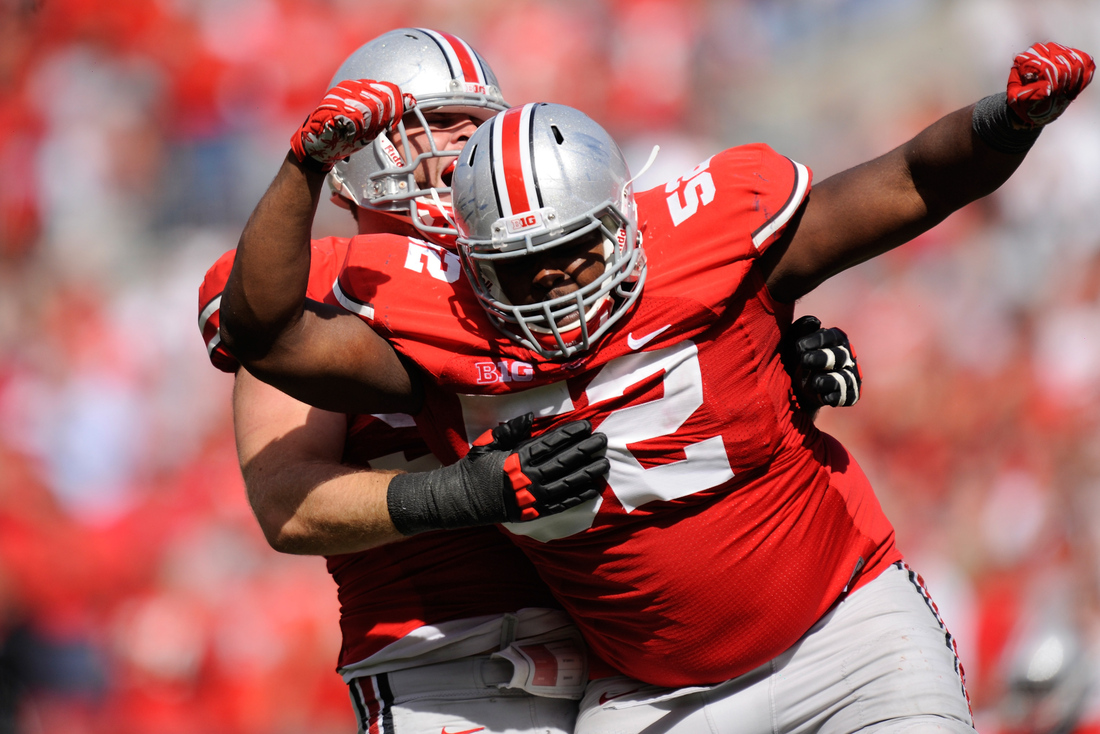 The whole journey of going undefeated my last year. The game at Wisconsin was huge, since it seems like we never win there. The overtime comeback against Purdue. The whole season was just something special. I’m just excited I got to leave a legacy at Ohio State.

Was it bittersweet to go undefeated, but not be able to prove yourselves in the national championship?

Watching the game was definitely tough, like we should have been there. I know we could have beaten Notre Dame. I kept hoping that if we went undefeated, the NCAA would change their mind and we’d be able to go. I wished we would have taken a bowl ban the year before, but I realized how much that bowl game meant to the seniors that year. It was all just really emotional.

Being only a few games into your career, have you had that ‘Welcome to the NFL’ moment yet?

Against the Eagles, it finally hit me. I had 4 tackles for a loss and a couple hits on the quarterback. Playing against Vick, Shady (LeSean McCoy) was awesome. I went through the preseason and didn't get to play that much, maybe only a series or two a game, but that game against Philly was my first game with a lot of playing time.

It’s a whole different atmosphere. College football fans are die-hard, and there’s nothing like 108,000 screaming fans in the Horseshoe. It’s incredible. It’s similar in the NFL, but it’s not as serious. The stadiums aren't as big, but they can be just as loud. You tend to get more of a mixed crowd in the NFL, as well, but you rarely get away fans in college. Well, Ohio State fans travel everywhere, but that’s an exception.

Who was the most intimidating player you’ve ever faced, whether it was in college or in the pros?

I wouldn’t say intimidating because I haven’t been scared to face anyone. When I was a freshman at Ohio State, I had to go up against Justin Boren every day in practice. He’s the toughest person I’ve ever been up against. Probably the best offensive lineman I’ve ever faced.