When you think of ESPN studio anchors and show hosts, you don't name too many people before Rece Davis. Thanks to his work with the Capital One Cup, I was able to talk shop about the Buckeyes and college football's latest stories.

You see the commercials all throughout the year while watching college athletics. While the teams are competing and the mascots are fighting, ESPN's Rece Davis is in the background informing us about the Capital One Cup.

Every year, Division I programs compete all year long to earn points in the race for the Capital One Cup. Based on their Top 10 finishes in the fall, winter and spring sports, the winning men's and women's programs earn the Capital One Cup trophy and a combined $400,000 in student-athlete scholarships at the end of the season.

I was able to talk with Davis, who's touring for and promoting the Capital One Cup, about the BCS National Championship contenders, Heisman hopefuls, and most importantly, "THE Ohio State Buckeyes".

So this is your fourth year on the Capital One Cup's Advisory Board. What made you want to be so involved with the Cup and what do you love most about working with Capital One?

It's something that's a great thing to be a part of and I'm honored and privileged that Capital One has included me now for the fourth year to be a part of the advisory board. The meaningful thing that Capital One does is it provides $400,000 in scholarship money for the winning schools. We talk about sports as being an avenue for people to be able to pursue goals and further their education. Capital is doing something about that and they're contributing in a very positive way.

Let's get down to football. Ohio State has Purdue, Illinois, Indiana and The Team Up North left on the schedule. With those 4 teams having a combined record of 13-15, what are your thoughts on the Buckeyes going 12-0 again this year?

It would be a surprise if they didn't. I think that, potentially, they could have a real challenge in the B1G Ten championship game. Not that Ohio State isn't better than anyone they would face, but for instance, if Michigan State ends up winning that division, I think that the level of defense they play typically keeps them in every game. If they can keep it close, anything can happen. Or, it could be back-to-back games against, I know you won't say it, but I will..."M*ch*g*n".

I remember having this conversation multiple times on the air back in 2002 when Ohio State won the National Championship and won a lot of close games along the way and people were saying "are they really this good?" -Rece Davis

All "bias" aside, the argument can be made that The Team Up North is the worst 6-1 team in the country. Can the Wolverines put up a real test against Ohio State in Ann Arbor this year like they did last season in Columbus?

In a rivalry game anything can happen, and Michigan has talented players. I remember having this conversation multiple times on the air back in 2002 when Ohio State won the National Championship and won a lot of close games along the way and people were saying "are they really this good?" and "how in the world are they going to stay on the field with mighty Miami?" Maybe that can't destroy everybody on their schedule, but with that one exception against Penn State, they found a way to win the game. I think at some point players start believing we will find a way, and that can be a very powerful thing in a game, particularly in a rivalry game.

Let's say Ohio State ends the season undefeated. Will it be enough to make a run at the National Championship? If not, what needs to happen?

I think that's a pretty easy answer: I think they need 2 of the 3 teams in front of them to lose. I don't think there's a giant gulf between the talent levels of those 3 teams and Ohio State. What is different is the perception of their schedule, though I think that perception might be a little exaggerated, and the fact that Ohio State didn't beat teams 50-nothing the way Oregon and Florida State have. Is that the measure of a great team? Not always, but if you want voters to accept the fact that your schedule might be a half-notch behind what these other 3 teams are playing, you have to be impressive and the outcome can't be a doubt. On the field, in a match-up, if Ohio State plays anybody, there is no question in my mind they can win the game. Ohio State is more of an equal, and that could be a tough game that could go either way. 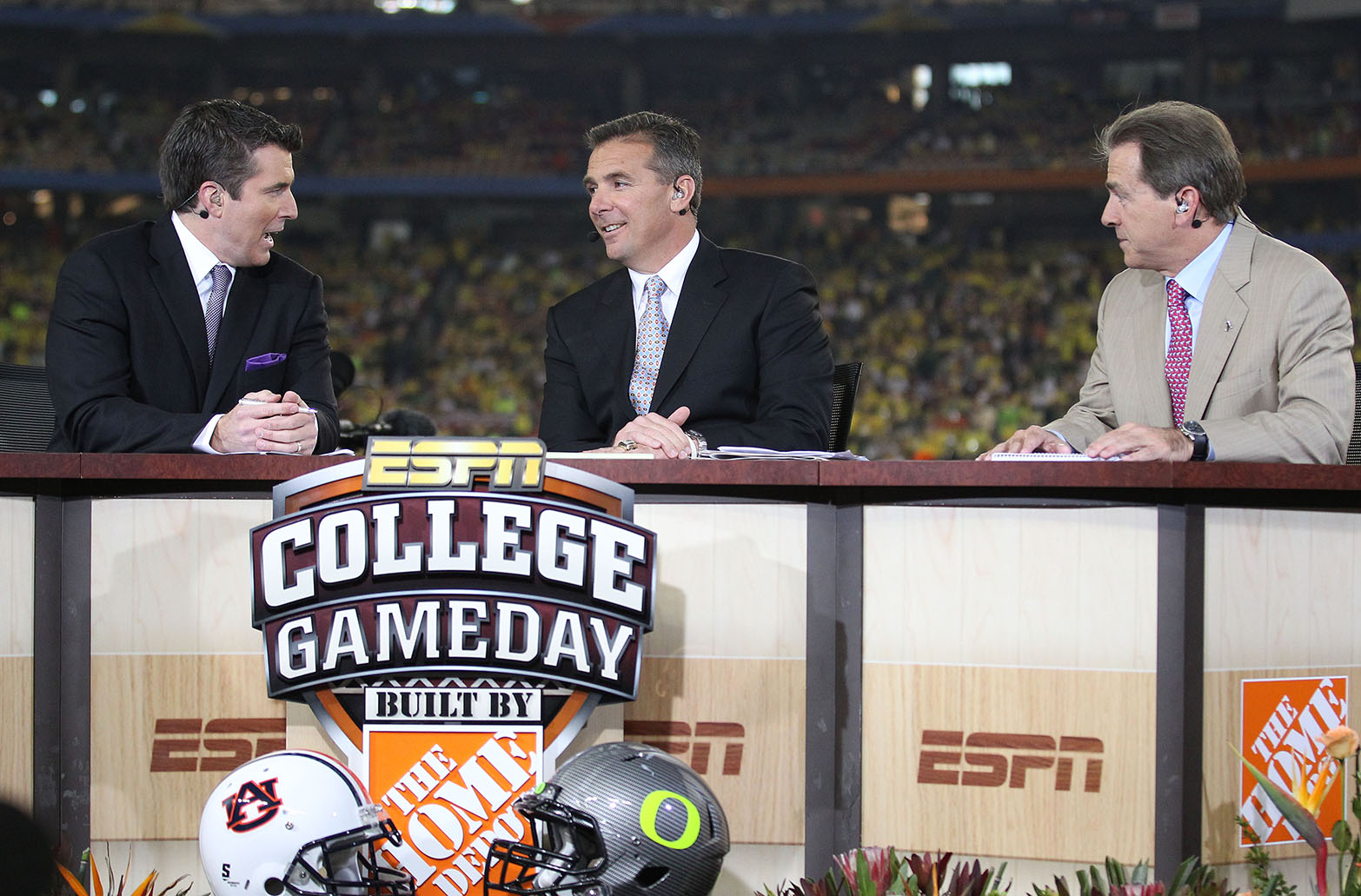 Your alma mater Alabama takes on LSU at home this weekend. What's been the Tide's key to success this year and do you think this will be a statement win for the Alabama?

LSU is a very talented team. They had a stumble against Ole Miss in which they did not play well. I don't mean to take anything away from Ole Miss, but they lost the game. I think they have one particular match-up that could give Alabama problems: they have a quarterback who can make every throw ever invented and they have receivers who can catch the ball in traffic in a very difficult one on one match-up. I wouldn't say Alabama has a weakness, but if they had something that is not as strong as other parts of their team, it would probably be the cornerback position. I think that's the match-up that LSU can potentially exploit. The degree at which they exploit it will be a major factor in the game. I think the other key is can LSU slow down their offense. They don't go at a break-neck pace like Oregon does, but I saw a stat the other day that the entire month of November they punted 5 times. They've been extraordinarily efficient and balanced on offense, and McCarron has been terrific. I think those are the two big keys in the game.

Because of Alabama's dominant offense across the board, do you think A.J. McCarron is getting overlooked because he isn't putting up the big games like other quarterbacks? Should he be in the Heisman conversation solely because he's effectively leading the nation's no. 1 team?

Jameis Winston has been one of the biggest stories of the year. The Johnny Manziel comparisons have been made, and does Famous Jameis really have a chance to take home the hardware?

There's no question he does, particularly if he's playing in the National Championship game and has some great moments on the big stage. He's got another big stage this Saturday against Miami. He also still has Florida and the ACC Championship game if everything goes according to plan. I think Jameis is one of the leading contenders but by the same token, Mariota also has similar types of stages. I think McCarron is also starting to generate some support late in the run largely because of his long-term success he's had. Manziel is still as good as any player in college football this year. The difference between this year and last is he won't have that grand statement win against Alabama, and I'm not sure he's going to have the same type of support with the Heisman voters, unless these others fall off. But if you look at the numbers, he's putting up a spectacular year.

Call it now: who wins the Heisman trophy this year?

If I'm predicting right now I'd say Marcus Mariota, but only by a hair. It'll be a very close race with Jameis Winston.

If the season ended today, we'd see Oregon and Alabama in the BCS National Championship game. Alabama leads the nation in points against per game (9.8). Let's say this game happens, is Oregon's offense strong and fast enough to run it up against the Tide, or would the Ducks and Marcus Mariota finally meet their match?

It's tough to simulate what Oregon does. History would tell you that Oregon doesn't put up 50 against the SEC teams they play, but the difference is Oregon has never had a quarterback who is as good as Marcus Mariota. He's as good as anyone in the country. He's a transcendent type of talent, and he's a much better passer than anyone Oregon has had. There's no question in my mind Oregon would move the ball. Would they score 50 on them? Probably not, but they would move the ball and it would be a more offensive-based game.

Straight up: who is in your National Championship game?

I would say Alabama and Oregon, but it wouldn't surprise me if any of the top four teams made it or if Baylor made it or Stanford made it.

SB Nation and LGHL especially would like to personally thank Rece Davis once again for taking the time and talking shop about college football and, most importantly, "THE Ohio State Buckeyes".