Ohio State Buckeyes in the NFL: Keeping Up, Week 5

There were two notable Buckeyes on a bye week last week, and another was injured. Could any of the former Buckeyes wrest the player of the week award away from Lil' Animal?

Share All sharing options for: Ohio State Buckeyes in the NFL: Keeping Up, Week 5

We're back with another edition of Keeping Up, where we profile all the performances from ex-Buckeyes in the-

(pours out a pint of water from shoes)

Excuse me. The NFL. We'll start with the early games and move through the late ones, and our first -

Sorry. I attended the Patriots-Bengals game in person, and got just a little wet. This is what the game looked like in the second quarter: 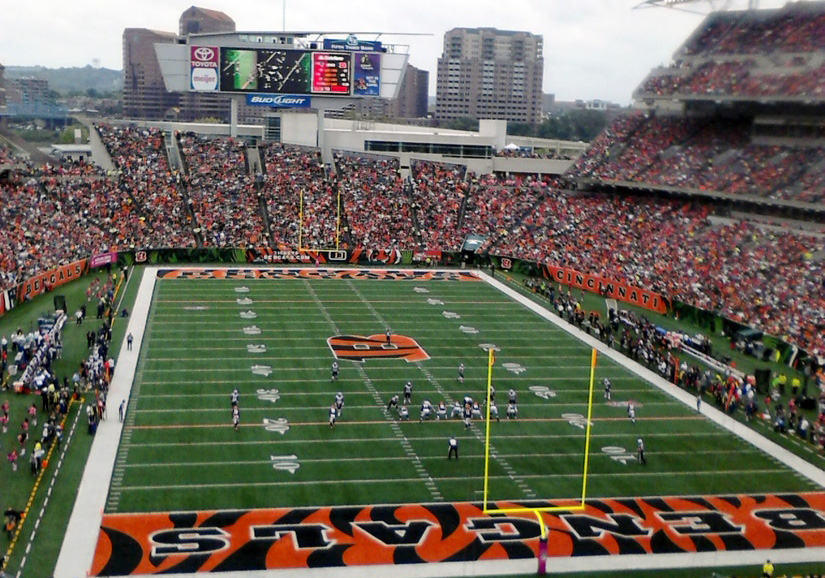 If you saw how things played out, you'll know that the sky cried tears of Patriots fans at the end of the game. You'll also know that the Bengals defense shut down Tom Brady, ex-Wolverine, and the Patriots offense, and broke Brady's streak of 52 games with a TD pass. The last two minutes of the game were played in a torrential downpour and looked awfully familiar to #B1G fans. For the Bengals, Dane Sanzenbacher ran a few routes and played on special teams, but was not targeted by Andy Dalton. Mike Nugent contributed two field goals, including a huge 50-yarder. For the Pats, Nate Ebner was active, playing entirely on special teams and recorded his first tackle of the year. It was a great game overall, and myself and fellow Bengal fans didn't mind getting a little wet. The crowd noise in the last two minutes was Seattle-esque. Not quite the 'Shoe, though.

Moving on to the rest of the league: The Baltimore Ravens and Miami Dolphins matched up. In Brian Hartline's return to this list, he amassed 4 catches for 60 yards, besting his total from last Monday night. John Simon was active, but did not record a statistic.

Jake McQuaide got to see his old buddy Michael Brewster when the Rams met the Jaguars. Brewster did not have any significant playing time or contributions, and McQuaide continues to snap the ball successfully. However, James Laurinaitis, last week's NFL Player of the Week award winner, helped his defense to bounce back from a pretty terrible performance. Laurinaitis contributed 6 solo tackles (8 total), a huge interception in the end zone that robbed the Jags of a score, one tackle for loss and a pass defensed.

Former teammates Rob Sims and A.J. Hawk did battle in the Lions-Packers game, and Hawk's Packers came out on top as the Lions were without Calvin Johnson. Sims and the rest of the Lions' offensive line struggled to keep QB Matthew Stafford upright for the first time this season, as they allowed five sacks. Hawk had a better game, making 7 solo tackles (9 total) and finishing with a pass defensed. Packers defensive tackle Ryan Pickett spent most of his time eating up blocks but didn't record any traditional statistics on the day.

After last week's start, Jim Cordle backed up former Wolverine David Baas at center for the Giants. Unfortunately, the Giants' comeback attempt was thwarted by Philadelphia, who ran away and hid in the 4th quarter behind the arm of backup QB Nick Foles. Kurt Coleman had a solo tackle for the Eagles.

The Saints' Malcolm Jenkins had himself a nice week, after making 2 solo tackles last week in the Monday night game. Jenkins came back with three solo tackles and a big sack of Jay Cutler on a safety blitz. The Saints won, 26-18.

Moving on to the late games, Ted Ginn, Jr. continues to be a reliable target for Cam Newton in Carolina. Ginn was targeted five times and made four catches for 78 yards, with a long 36-yarder. Unfortunately it went for naught, as the Panthers fell to Arizona 22-6.

The Broncos and Cowboys had an old-fashioned shootout in Dallas, when Peyton Manning and Tony Romo went toe-to-toe against two struggling pass defenses. Will Allen was part of the Dallas secondary rotation that got torched by Peyton Manning, but didn't have a whole lot to do with it. Allen only contributed one tackle.

Due to the playoff baseball game in Oakland, the Raiders game and the triumphant return of Terrelle Pryor was moved back to very late Sunday night. Pryor tossed a 44-yard touchdown to receiver Rod Streater and started the game off 8 for 8, and was 13-18 for 141 yards and 2 touchdowns in the first half. TP finished a surgical 18/23 for 221 yards and 2 TDs with no picks. He rushed 11 times for 31 yards. Chimdi Chekwa made his first appearance of the season, recovering a fumble on special teams.

The final game of Sunday involved two teams with former Buckeyes opposing one another. The Texans' DeVier Posey was targeted twice and had a reception in garbage time as the 49ers crushed Houston. Donte Whitner, who famously wanted to legally change his name to "Hitner, was unable to accomplish the task due to the government shutdown (/THANKS OBAMA jokes) but he made three solo tackles and forced a Ben Tate fumble which he also recovered. Alex Boone had a little trouble with J.J. Watt, as all mortal men tend to do, but was able to pave enough way for Frank Gore to have a nice game. The Niners were actually outgained, but the Texans had four turnovers, and the game ended up being a blowout to the point where there was a T.J. Yates sighting.

The final game of the week, Monday night's, will pit Santonio Holmes and Nick Mangold's New York Jets against the Atlanta Falcons. We're looking forward to that one, as it is a huge game for the Falcons to get back on track and a statement game for New York.

As always, don't forget to vote for who you think was our former Buckeye in the NFL player of the week. Will last week's winner, James Laurinaitis, defend his title? You be the judge.