With an excellent hire in Chris Collins, Northwestern is clearly a program on the upswing for the future. But does that mean anything in regards to this season?

One of the past five seasons was supposed to be the year. It was supposed to be the one that ended the long-standing suffering of all Northwestern fans across the country. Unfortunately though, coach Bill Carmody and the Wildcats couldn't get over the hump, and Carmody was fired. The university brought in first-time head coach Chris Collins of Duke fame, an excellent hire for a university not known for its athletics. What can we expect of the Wildcats moving forward? Let's dig in.

Outside of Carmody, the Wildcats also lost leading scorer Reggie Hearn, former Louisville forward Jared Swopshire, and Great Britain's Alex Marcotullio. Hearn was a gunning guard that stepped up during Drew Crawford's absence last season, and he'll be sorely missed from a production standpoint. Swopshire averaged 10 points and seven rebounds last season as a stretch 4 after two meaningless seasons with Louisville. Marcotullio was a backup guard who played about 20 minutes per game during all four of his seasons at Northwestern, making him one of the more valuable pieces of Northwestern's program during their program-best run of four consecutive NIT appearances from 2009-2012.

Nate Taphorn, a three-star recruit out of Pekin, Illinois, was their only signing this offseason. He's a skinny 6'7" spot-up shooter that probably isn't ready to play due to the fact that he weighs 180 pounds. Northwestern does have a history with these types of players, such as John Shurna and Kevin Coble, so Taphorn may fit right into that long illustrious history. Just probably not this season.

Not much is known about how Chris Collins is going to fair as a coach, but it's clear he's already hit the recruiting trail hard, having received commitments from two four-star recruits for next season - a first for the program. As of right now, they are 19th in the country for the 2014 recruiting season. As far as actual coaching goes, he plans to move away from Carmody's favored Princeton offense towards a motion offense and an uptempo scheme. At the very least, Collins should make the Northwestern program fun for the first time in its history, which is an accomplishment in and of itself. 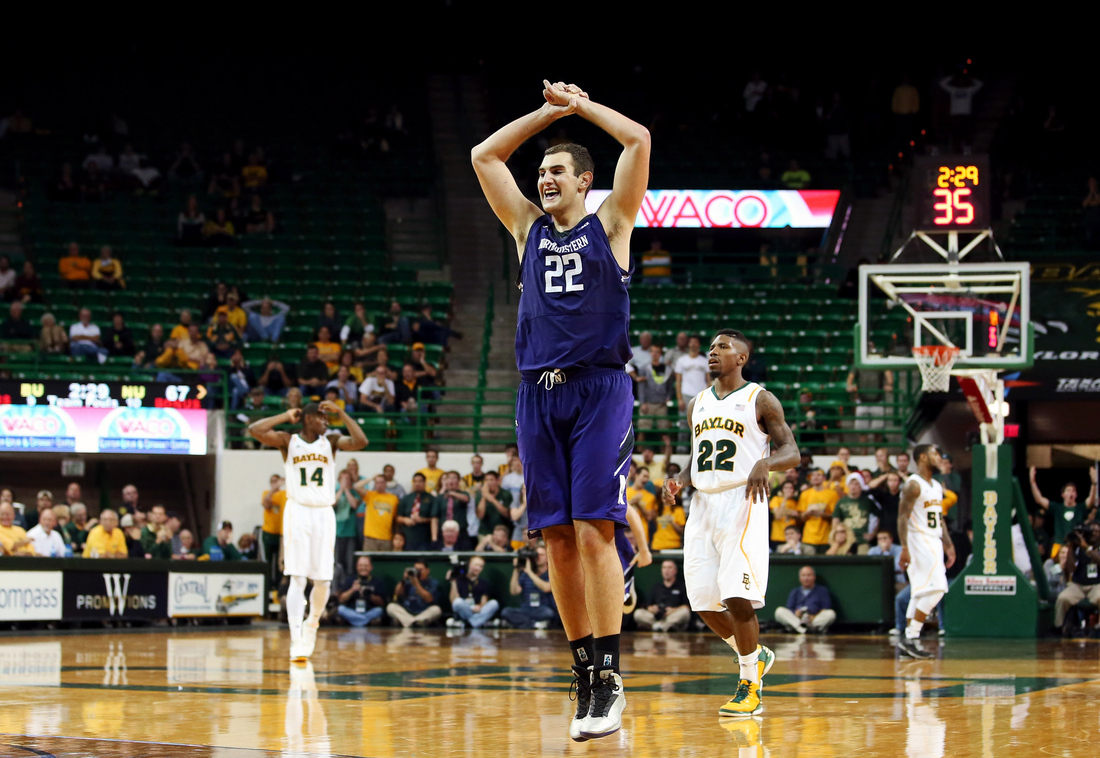 Drew Crawford returns from a torn labrum, and will be expected to lead an offense exceedingly short on other options. Crawford was All-Big Ten in 2012 and the media's Big Ten Freshman of the Year in 2010, so his return will should help breath life into the Wildcats. Next to him in the backcourt will be Dave Sobolewski at point guard, who averaged 10 points and four assists last season, and JerShon Cobb, a guard returning to the team after being suspended last season. In the frontcourt, 7'0 Alex Olah is expected to start and be the rock in the paint for Northwestern after a great summer with the Romanian National team. Next to him could potentially be one of Kale Abrahamson or Sanjay Lumpkin depending on who impresses the coaches most during the preseason and whether Collins wants the shooter in Abrahamson or the slasher in Lumpkin.

Tre Demps will probably be the first guard off of the bench in order to replace what Marcotullio brought. Whichever of Abrahamson or Lumpkin don't start will help Demps provide offense off the bench. Another interesting player on their bench is the tallest player in Northwestern's history, Chier Ajou. He had to redshirt last season but at 7'2" he will be the tallest player to get actual minutes in the conference season and among the tallest players in the country this side of Sim Bhullar.

Who brings the secondary scoring after Crawford?

Who brings the secondary scoring after Crawford? Sobolewski will probably be able to average around 10 points per game again, but isn't an efficient scorer. The jury is out on Cobb who is coming off of a suspension. My guess is that Olah provides offense in the middle. He played extremely well in the U20 European Championships this summer, and has lost a ton of weight this offseason. If he can bring even a little bit of skill on the interior, that would go a long way towards helping Northwestern this season.

Crawford returns to his All Big-Ten form and scores 19 points per game. Olah takes the next step in his development, and some of the young guys like Lumpkin and Cobb build towards next season and Northwestern's solid recruiting class. The team goes 7-11 in the Big Ten this year, but pulls off one massive upset.

Not even Crawford's return helps the severely deficient talent on this roster as no secondary scoring threat shows up and Collins' team gets in a lot of high-scoring games. This leads to a 3-15 record, even worse than last year's debacle.

Collins has his work cut out for his this season. I don't really see any way that this team can make a post-season run given that they have a fairly difficult non-conference schedule early on. I'll say that Crawford adds another third-team All-Big Ten credential to his trophy case this year as the Wildcats improve by one game in conference to 5-13. But there's really not much to look forward to in Evanston until next season.