We look at Braxton Miller's improvement in the pocket and as a decision maker during the last three games.

Quarterback Braxton Miller began the 2013 season as a Heisman Trophy favorite until he suffered an MCL injury during the first quarter of the San Diego State game. We all know the narrative: as backup quarterback Kenny Guiton played very well in Miller's three game absence, which led to some Buckeye fans wanting Guiton to play over Miller after he came back from injury. Miller played very well versus Wisconsin in his first game back, then stumbled a bit but got the victory over Northwestern the following week. Coach Urban Meyer actually had Guiton warming up on the sideline in Evanston while Miller was struggling, but Miller eventually marched his team down the field for the game winning touchdown.

Since the Northwestern game, Miller has been playing the way Buckeye fans envisioned him playing prior to the knee injury. The offense is borderline unstoppable, averaging 51 points per game, and Miller has only played in 8.5 out of the last 12 quarters due to the Buckeyes being up big by halftime versus Penn State and Purdue. As expected, the running game has been excellent, but surprisingly (based on last season), the passing game has been just as dominant.

In the past three games, Miller has completed 59-of-74 pass attempts (78.7%) for 707 yards and has thrown for 9 touchdowns to only 1 interception. His pocket presence has drastically improved, and his confidence in the pocket has never been greater.

I looked over the past three games and charted every drop back. Here are my findings:

Points to take away from the data:

Let's take a look at some of his throws:
1. Here the Buckeyes open up versus Penn State in 11 personnel (3 WR, 1 TE, 1 RB). The past few games, the Buckeyes have came out throwing the ball, looking to take advantage of the opposing defense that has been watching film on their running game all week. 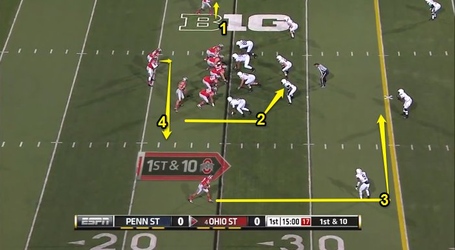 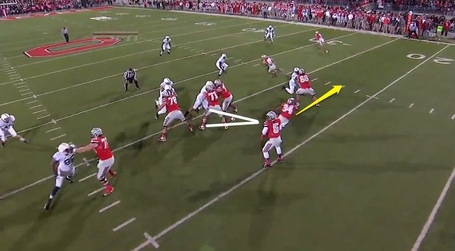 Corey Brown is in the slot (1) and he is Miller's first target after the play- action running a WR screen. Miller looks there first and sees him covered. 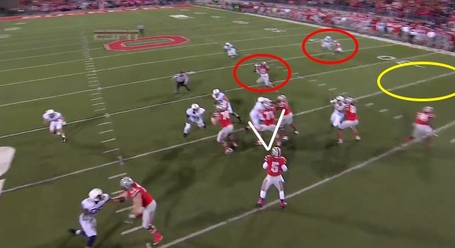 Miller then comes back to Jeff Heuerman running a backside slant which is covered and to Devin Smith who is running a 10-yard in which is also covered. 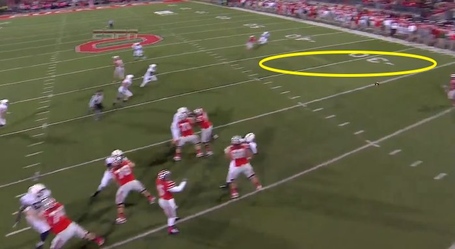 With great protection and Miller's composure in the pocket, he turns his hips and checks down to an uncovered Carlos Hyde for the easy first down. Miller stood in the pocket for about five seconds without looking to run after his first three options were covered. This is where Miller has improved the most, surveying the field and feeling comfortable in the pocket. 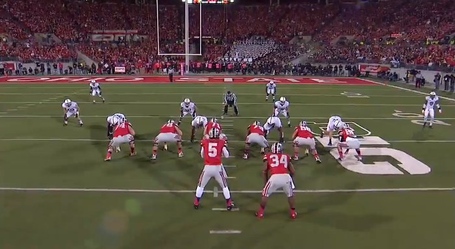 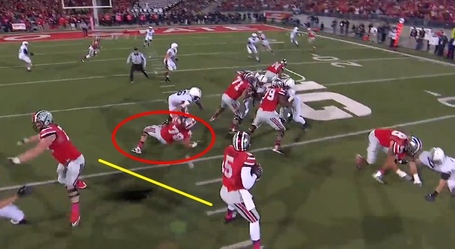 Left guard Andrew Norwell gets bull rushed by a Penn State defensive lineman, forcing Miller to step-up in the pocket. 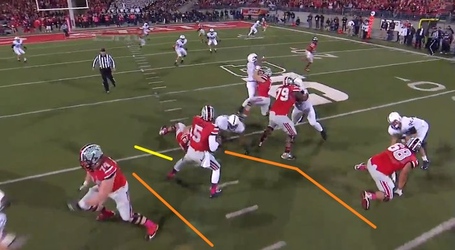 This is a huge change from last season where Miller would have ran and most likely gained 7-10 yards. Instead, he kept his eyes down field and stepped up in the pocket right near the line of scrimmage. 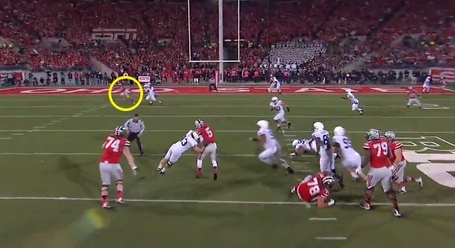 Miller stepped up and took a huge shot as he lets go of the ball. He hit Smith at the 6- yard line for another first down. I can't say it enough how impressive this is for a quarterback like Miller, as he would have scrambled in this situation 9/10 times last season.