Despite being a 7th round pick, former Buckeye defensive back Kurt Coleman has made a name for himself with the Philadelphia Eagles. Coleman took some time out of his busy schedule to talk with Land-Grant Holy Land about life in the NFL, his charity work, and more.

Selected in the seventh round of the 2010 NFL Draft by the Philadelphia Eagles, Kurt Coleman has had his share of peaks and valleys during his NFL career. With the team looking to replace future Hall of Famer Brian Dawkins, Coleman was faced with a tough task from day one. Hampered by injuries the past few seasons, Coleman was once named the NFC Defensive Player of the Week after a three interception performance. The former Ohio State defensive back took some time to talk to us about his career, his charity work, and how he thinks the current Ohio State football team finishes the season.

I would have to say the change in my daily routine was the toughest part. I don't really have a set schedule like I did in college. Before, I'd have to balance classes, homework, practices, lifting, and so on, so I didn't really have a lot of free time. Obviously I still have practices and all that, but there's a lot more I have to do on my own. You have to really coordinate what you do so that you can stay on top of your preparations.

Would you say that playing at a big-time program, like Ohio State, prepared you for rigors of the NFL?

Definitely. Coach Tressel and the rest of the staff made it easy. They taught us how to study, how to keep our bodies from breaking down, and they just made it a comfortable transition for me. They also taught me that my family should come first, so I've learned to just balance my life in and out of football.

Outside of football, is there anything you're passionate about?

My dad had breast cancer a few years ago, so it's very near to my heart

I'm always doing work with my foundation. I have Coleman for the Cure, which our main goal is to raise awareness for breast cancer, especially among men. My dad had breast cancer a few years ago, so it's very near to my heart. Even if I can make a small difference in people's lives, I'll have been successful. I'm always active spreading the message in Columbus or Philadelphia. Just recently, I met a little girl with cancer and we had her come out to a game, gave her tickets, some gear, and just showed her that she can still live a normal life. It's been a great learning experience and very humbling.

After you graduated, what feedback were you receiving from teams leading up to the draft?

To be honest, I wasn't really sure where I was going to go. Being optimistic, I was hoping I'd go somewhere on day 2, but I also knew I wouldn't go very high. I just tried to stay consistent in my workouts and hope that I'd impress someone enough. I kept my emotions consistent, as well, not getting to excited when I'd get good feedback or too low if I didn't perform well. When it got to the 7th round, teams were calling telling me they were interested in picking me up as an undrafted free agent, but that still wasn't my mindset. I wanted to see how it played out. Sure enough, the Eagles picked with with about ten picks left. 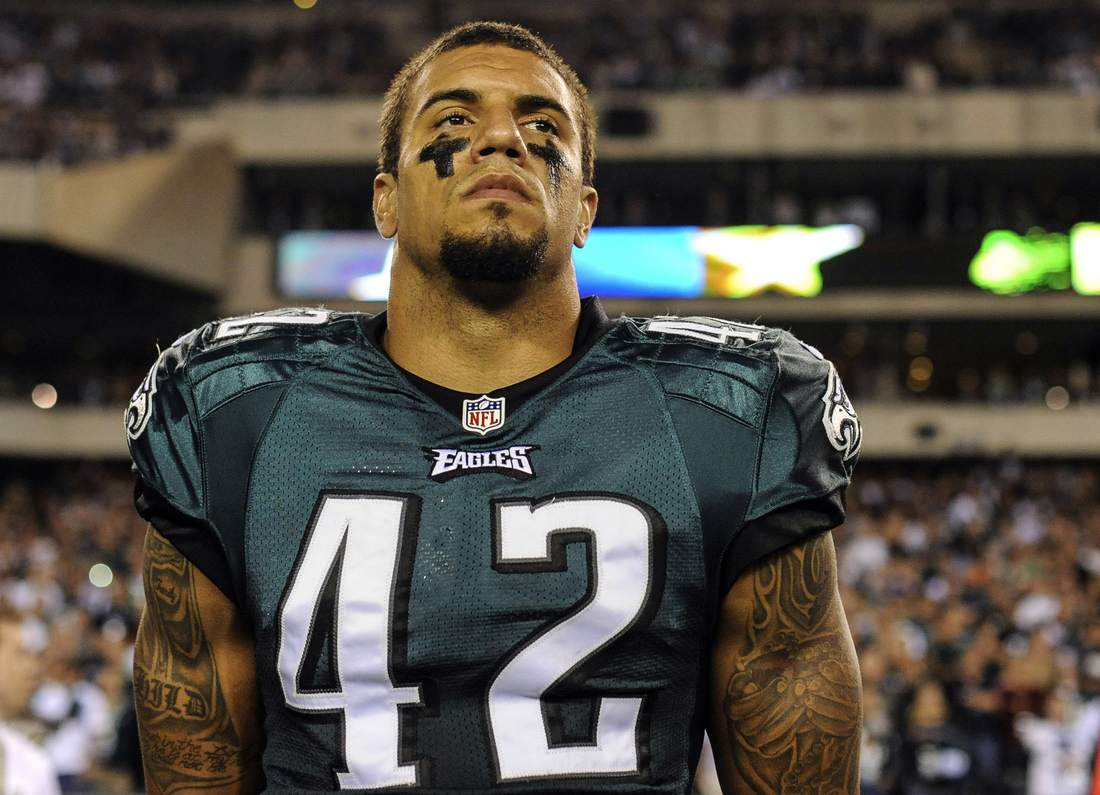 Growing up, I was always a big baseball fan. In fact, I thought that was going to be my avenue, but God had a different plan for me. I didn't expect to make it to the NFL, but after my junior year of college, I knew I had a chance to make it.

If Ohio State fans were to look back on your time in Columbus, what would they say about your tenure?

I was equally a student and an athlete

Hopefully, they would say I was not only a great person and a great leader, but a great Christian as well. I'd hope they'd talk about how I was equally a student and an athlete. How I was a part of the winningest class in Ohio State history. I'd leave it up to them, but hopefully I left a great legacy.

Fans of the Scarlet and Gray are quite passionate about their Buckeyes. Would you say that Eagles' fans are similar?

Man, there's nothing like Buckeye Nation. Eagles fans are pretty passionate, you know, throwing snowballs and booing Santa, but they really don't compare.

Do you keep in touch with your former teammates or any other Buckeyes?

For sure. I just talked to Donald Washington the other day. I talk to James Laurinaitis, Malcolm Jenkins, and really just anybody else who I played with. If we're playing against somebody that went here, I'll try to catch up with them after the game. It's always great to see others doing well in the league. I'll talk to some of the greats too, like Mike Doss, Chris Spielman, and Kirk Herbstreit when I go to different events.

Beating Michigan all four years I played will forever be the greatest memory of my career. Being an All-American and winning the Rose Bowl are great memories too. I had a lot of amazing things happen in my career, and capping it off with a Rose Bowl MVP would be another good one.

Have you had a career defining moment in the NFL?

The best is yet to come. I've had a few good games, like the three interception game against the Redskins, but I haven't done anything worthwhile or anything that defines me as a player.

Megatron is a monster. He's like LeBron James in pads

Who has been the most intimidating player you've ever played against?

I've played against a lot of great players, but none have been better than Adrian Peterson and Calvin Johnson. AP is just a beast. I think he's one of the best players in NFL history. Megatron is a monster. He's like LeBron James in pads.