Getting ready for the Illinois game, we took a closer look at their signal caller, one of the most improved players in the conference.

Illinois quarterback Nathan Scheelhaase may be the most improved quarterback in the Big Ten compared to last season. In 2012, Scheelhaase completed 60% of his passes and threw for just 4 touchdowns and 8 interceptions. This season, he is completing 65% of his passes and has thrown for 15 touchdowns and 8 interceptions. Illinois has lost their last five games, but the passing offense is not the issue in Champaign. They are 56th in the nation in yards per game with 425 yds/ game and 23rd in the nation in passing yardage per game with 288.9 yds/ game. It would be safe to say they have some similarities to the 2012 Indiana squad that gave the Buckeyes trouble last season.

Scheelhaase is much improved, but he is no where near perfect. He tends to sail the ball high way too much and still forces throws into double coverage. He has thrown for a lot of yardage and more touchdowns this season but he will likely have more interceptions this season compared to last. Steve Hull, who plays slot receiver, is excellent after the catch, averaging 20 yards per catch on his 28 receptions. Scheelhaase also checks down a lot to his running back Josh Ferguson who leads the team in rushing yards (485 yds) and receptions, with 37. They do not run an innovative offense that is hard to game plan for, they just run an efficient pass first offense that has made them competitive in most games.

Here is the breakdown: 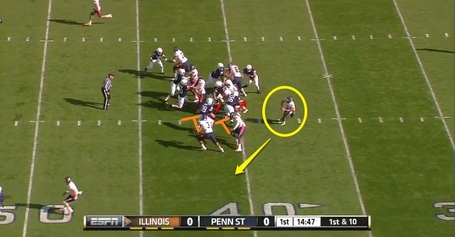 On the second play of the game following a first down, the Illini came out in a double tights formation with both tight ends flexed. Scheelhaase took the shotgun snap and executed the read option to perfection, fooling the entire Penn State defense into thinking the running back had the ball. He does not have Braxton Miller highlight ability (but hey, not many people do) but he has respectable speed. Scheelhaase gained 14 yards on the play for their second consecutive first down. 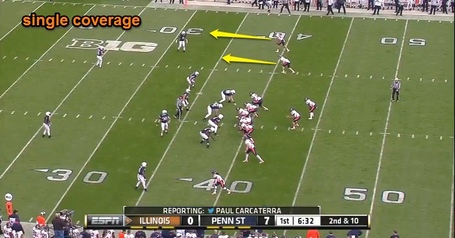 On 2nd and 10 from the Penn State 39 yard line, the Illini came out in 10 personnel (4 WR, 1 RB). Pre-snap, the top slot WR (Hull) flashed a signal to Scheelhaase, most likely telling him that Penn State was in single coverage with no safety over the top. Most teams have route options that they can use based on coverage and the two receivers at the top ran go routes. Scheelhaase has enough confidence in his receivers to throw the ball up and expect them to make a play and it paid off, resulting in 6 points... Until it was called back for a chop block at the line of scrimmage.

Late in the 4th quarter, down 14-10 on the road at Happy Valley, Scheelhaase kept his composure and led his offense to a 13 play, 77 yard touchdown drive to take the lead 17-13. After completing a couple of huge 3rd and longs to extend the drive, they came out in 11 personnel (3 WR, 1 TE, 1 RB) on 2nd and 10 from the Penn State 7 yardline. They called a screen pass to Ferguson and it worked out perfectly. Scheelhaase had a defender hanging off of him and three others right in his face as he dumped the ball to his running back with only the end-zone ahead of him.