Some teams honored those affected by cancer, while others were in the Halloween spirit. In preparation for this weekend's slate, Land-Grant Holy Land has you covered on the latest uniform changes around the country.

Traditionalists may dislike the widespread use of a non-school color in college football, but thereâs no doubt it has an effect on the players. The Cougars coaching staff introduced a black uniform for their Halloween matchup with South Florida. 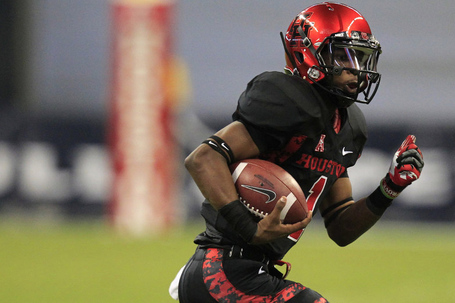 The staff had a little fun at the playersâ expense when unveiling the uniforms. (fast forward to 2:15)

The Tigersâ football team underwent a rebrand in the offseason, giving fans an opportunity to choose the teamâs new look. Against the Cincinnati Bearcats, the team debuted a chrome helmet featuring tiger stripes, similar to that of the Cincinnati Bengals. 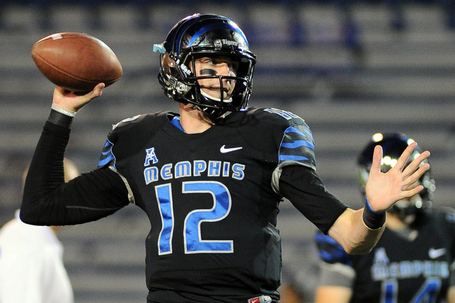 To mark the one year anniversary of Hurricane Sandy, the State University of New Jersey will wear their scuffed silver helmets with a decal featuring the state outline.

The Wolfpack have slightly tinkered with their look over the past few seasons, most notably by introducing a red helmet. Against Florida State, the team showed that not all uniform changes are drastic, simply switching facemasks and helmet stripes. 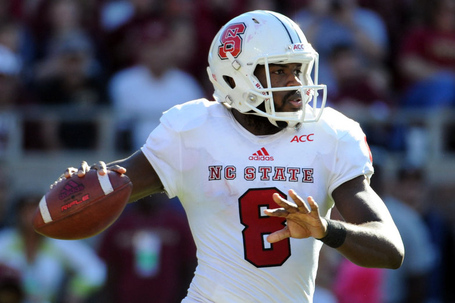 When North Carolina comes to Carter-Finley Stadium, theyâll be greeted by a midfield logo that claims the state is owned by the Wolfpack. I swear Iâve seen this done before.

When asked whether his team would wear an alternate uniform or helmet for the third straight season against in-state rival Michigan, Spartansâ head coach Mark Dantonio said he anticipated that the team would wear something special. In 2011, the Spartans wore a Nike Pro Combat uniforms against the Wolverines, while last yearâs team wore a chrome helmet. Late Friday night, this helmet was making it's rounds on the internet, but has not yet been confirmed to be legitimate.

The Buckeyes wore Nike Rivalry uniforms for the second time this season, this time against Penn State. The team also wore pink socks and wristbands in conjunction with the schoolâs "Pink Out Ohio State" initiative. 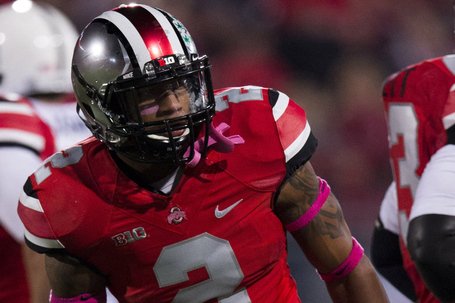 When the Buckeyes travel to West Lafayette, expect to see the Boilermakers donning a new helmet. As part of the "Boiler Black Out", the helmets will be matte black and feature a railroad track helmet stripe.

While the undefeated Bears have the week off, the team is already preparing for the biggest game in the programâs history. When Oklahoma comes to Waco, theyâll not only be greeted by the largest crowd in the history of Floyd Casey Stadium, but will the Bears in black from head to toe.

6 days till #EveryoneInBlack Here is the official uni combo for the game next Thursday #SicOU pic.twitter.com/VeBdoxrUrL

Pistol Pete doesnât make a great helmet logo, nor has it been well received by fans, so the Cowboys reverted back to wearing the interlocking OSU logo on their helmets against Iowa State. 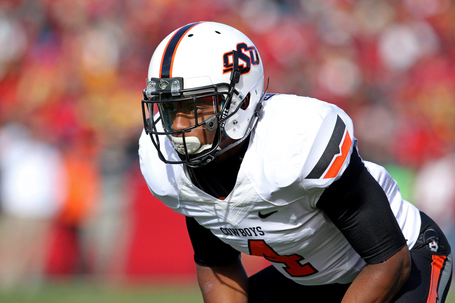 For their upcoming game against Kansas State, the Red Raiders will wear special uniforms to bring awareness to the Lone Survivor Foundation. Founded by a retired Navy Seal, Marcus Luttrell, the Lone Survivor Foundation honors those who died during Operation Red Wings, an intelligence mission in Afghanistan. After the game, the uniforms will be auctioned off, with the proceeds being donated to the foundation.

For their Halloween night matchup with Rice, the Mean Green broke out new black uniforms. With the win, North Texas became bowl eligible for the first time since 2004. 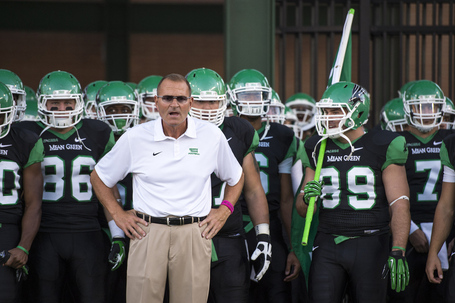 The Black Knights will go full camouflage at Air Force when the teams meet with positioning for the Commander-in-Chiefâs Trophy on the line.

Army football vs. Air Force Saturday. You know what that means for the Black Knights? Camo! #ArmyStrong #AirForce pic.twitter.com/nZEj3HIyIY

On November 13th, the Huskies will battle the Ball State Cardinals in some midweek #MACtion. When the Huskies take the field, the team will sport a patriotic motif for the schoolâs annual Military Appreciation Game.

If the Huskies can make it through the season unscathed, they'll be looking at their second consecutive BCS appearance. Against Western Michigan, the team will wear gunmetal gray uniforms, making the season finale even more special.

In the annual "Battle of the Bricks" game against Miami (OH), the Bobcats wore a white uniform with numbers that feature a brick motif, inspired by the bricks that adorn the campus in Athens. 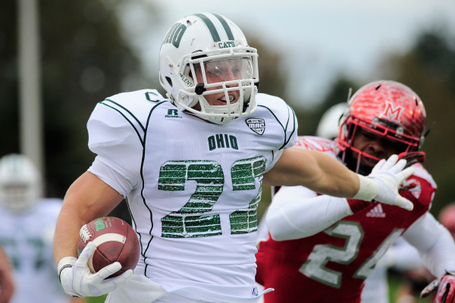 In position for a BCS berth, the Bulldogs hope to keep their dream alive with a win this weekend. Against Nevada, the team will wear an all-black uniform for the first time in school history.

Although the Wolf Pack didnât win the Battle for Nevada, their helmets certainly stole the show. A nod to the stateâs motto, the chrome "Battle Born" helmet featured the slogan on one side and a wolf decal on the other. 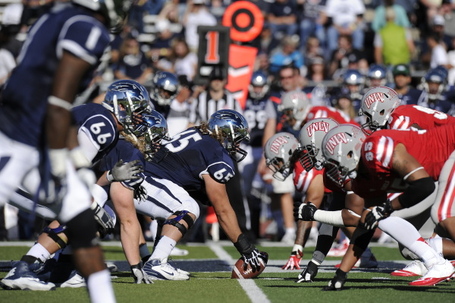 Since their rebrand in 2011, the Sun Devils rarely wear a uniform set that resembles the glory days of old. Against Washington State, however, Arizona State evoked memories of years past when they wore gold lids with maroon pants. 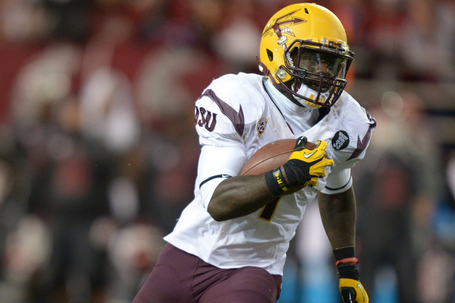 For the last time this year, schools wore pink uniforms or accessories to raise awareness for breast cancer. For "Blackout Breast Cancer", the Buffaloes wore black uniforms with a pink helmet decal. 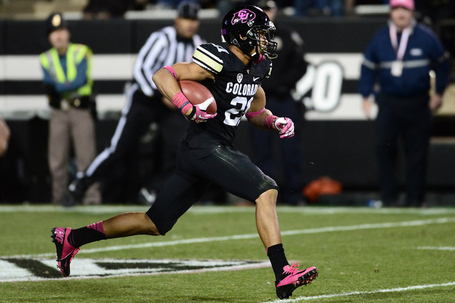 The Beavers wore orange-out uniforms for the first time this season in their loss to USC on Friday night. Even more unfortunate, they missed Halloween by one night. 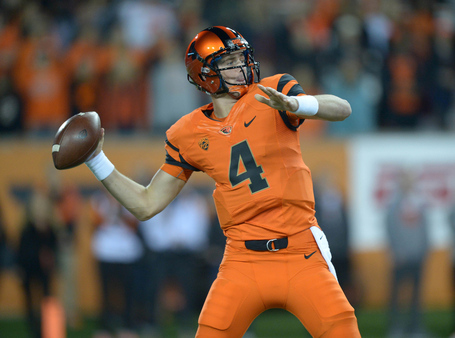 The Aggies are celebrating Military Appreciation Day by wearing a white helmet with a flag motif decal, as well as painting the endzones of Kyle Field red, white, and blue for their matchup with UTEP

Field is getting a nice makeover for Military Appreciation day #UTEPvsTAMU #12thMan pic.twitter.com/dCgDpch4he

Here it is! In honor of the men and women serving and have served our country #MilitaryAppreciationDay #BTHOutep pic.twitter.com/Oa3sTInMER

When the Trojans arrived at the stadium for their Halloween matchup with Louisiana-Monroe, the team was surprised by blackout uniforms.

The blackout didnât give the home team an advantage, though, as they fell to the Warhawks, 49-37.