Ohio State-Indiana: How OSU will run on the Hoosiers' defense

Taking a look at how the Buckeye run game will attack the porous Indiana defense.

Share All sharing options for: Ohio State-Indiana: How OSU will run on the Hoosiers' defense

Last week, Wisconsin ran for an astonishing 554 yards on 50 carries, an average of 11.1 yards per carry. James White piled up 205 yards, Melvin Gordon rushed for 146 yards, Corey Clement rushed for 108 yards and wide receiver Jared Abbrederis gained 86 yards on three carries. This is a serious problem for the Indiana defense. It shows that their defensive line is getting little to no push, their linebackers get washed out by blockers and their safeties are non- existent as they let up rushes of 93, 49, 44 and 33 yards. To put that in perspective, the Buckeyes have allowed one rush of over 20 yards the entire season and it happened last week versus Illinois.

Expect the Buckeye offense to establish the run early and often. In the first quarter this year, Ohio State has scored 192 points compared to Indiana's 73 first quarter points. That is a +119 scoring differential in favor of the Buckeyes. Their power run game will devastate the Hoosiers front seven, opening up their play-action that will suck up their defensive backs for easy completions. This defense is very flawed in all aspects of the game.

1. This is Wisconsin's first play of the game, they came out in a two- tight end set with Melvin Gordon running jet motion and James White in the backfield. 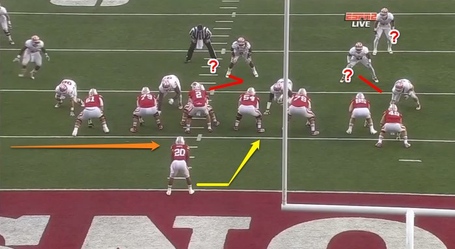 Pre-snap, the Indiana defense is in the 4-3 and they are actually in good position with the middle linebacker shaded over the A gap. 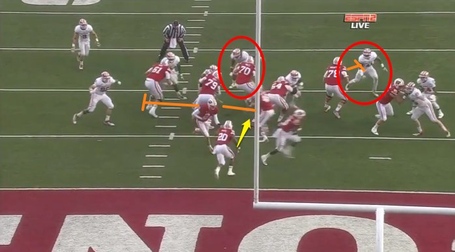 If the middle linebacker stuck with his initial movement, which was the A gap, (between the center and guard) this play would have probably been stopped at the line of scrimmage for no gain. Instead, he changes his mind mid-play (maybe because of the tight end coming back around) and gets sealed off by the center. The outside linebacker (right circle) gets kicked out by the right tackle and the defensive tackle gets manhandled inside by the right guard. The jet motion by Gordon strings out the safety completely out of the play and he is nowhere to be found. 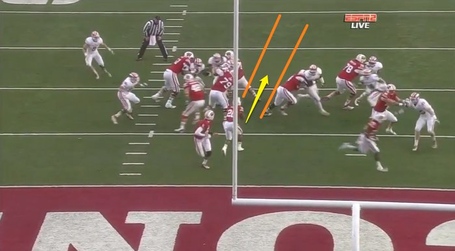 If the middle linebacker kept his outside shoulder free and crashed the A gap, then White would have had to cut back inside for a minimal gain or bounced it outside for little to no gain. Instead, he has no chance to make a play and the defensive tackle does not help either as he gets put on roller skates and gets pushed out of the play. The safety should be filling right now but as I said, he is nowhere to be found. 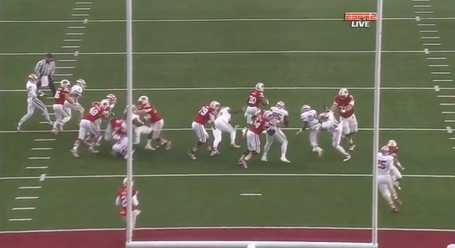 Where is the safety? This is not a good look. Overall, what could have been a minimal gain for the Badgers ended up being a 93 yard touchdown because of the lack of discipline from the entire front seven and the safety. The linebackers do not read their keys and have little instincts in the run game.

Although the Buckeyes may want to get their passing game on back on track after a poor performance versus Illinois, they may have no choice to pound the ball against this porous run defense. Carlos Hyde will have success between the tackles while Dontre Wilson and Braxton Miller will have their way on the outside (Abbrederis had two long touchdown runs on end-arounds). The defense has no discipline in the run game and I expect it to be a very long day for the Hoosier defense.