Land-Grant Holy Land keeps you up to date on the latest uniform news around the country.

A few weeks back, a member ofÂ the Cardinals staff tweeted a picture of a mannequin wearing a black uniform and a chrome-finished helmet. The university denied that it was anything more than a prototype to show recruits, and head coach Charlie Strong echoed that sentiment after a win over Houston on Saturday night. When asked if weâll ever see his team wear the black uniform, Strong said, "we donât need a black uniform to play better. We are who we are. We wear red at home and white on the road." (Fast forward to 7:30) 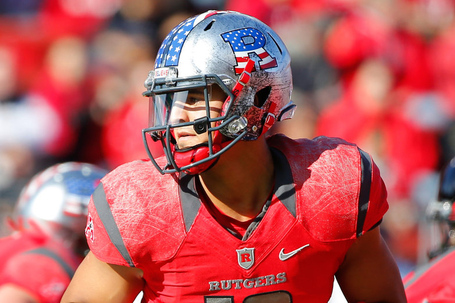 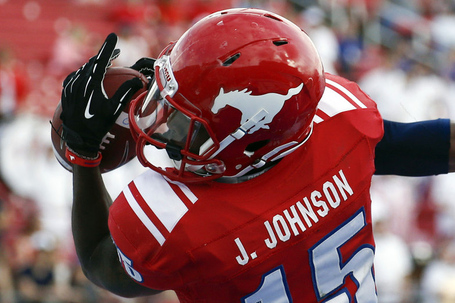 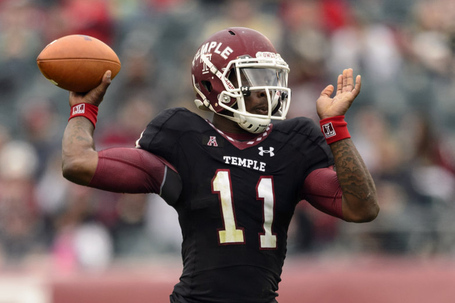 Back in August, the Tigers announced that they'd be wearing purple uniforms, for the first time since 2009, against Citadel. The "Purple Out" is in conjunction with the school's "Military Appreciation Day".

For the third time ever, the Terps wore their "White Ops" uniforms on the road at Virginia Tech. After previously being destroyed by West Virginia and Florida State wearing the all-white getup, the team was victorious in Blacksburg. 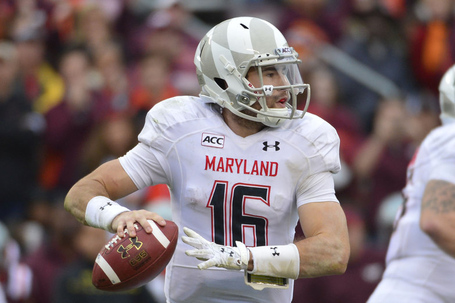 As noted in the past, the teamâs equipment staff will tweet a picture of the teamâs uniform combination for Tar Heelsâ upcoming game. Against Old Dominion, the team will be wearing their Carolina blue helmet and pants with their black jersey.

Despite the fact that the Hokies have one of theÂ best traditional looks in the country, the team hasÂ mixed and matched some of the moreÂ horrendous combinations since the uniform fad began. For the second time this season, Virginia Tech wore their "Hokie stone" helmet, this time with the "VT" logo.Â The school will be auctioning off these helmets at the conclusion of the season. 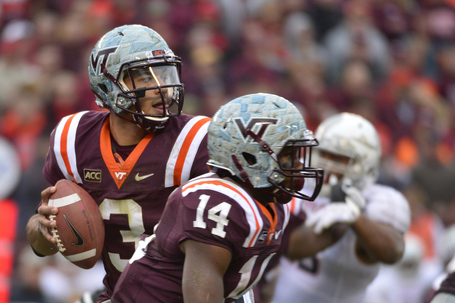 Against Ohio State, the Illini wore an alternate helmet that featured ten stars forming the shape of an "I" inside an outline of the state.Â The stars represent the ten former players who lost their lives defending our country. 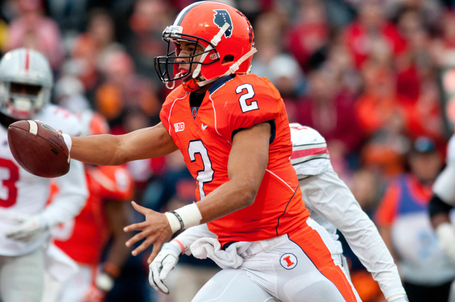 After wearing five alternate uniforms in the past two seasons, the Wolverines will not be wearing anything other than their standard home and away uniform this season. On the heels of Ohio State announcing a special uniform for "The Game", rumors of Michigan wearing an alternate surfaced. However, Michigan AD Dave Brandon told the media before the season that the football team "wouldnât be wearing any alternative uniforms this season."

In the game that clinched a trip to the Big Ten Championship, the Spartans wore a chrome helmet when they traveled to Nebraska. This was the second time the team wore the chrome dome, splitting the results. 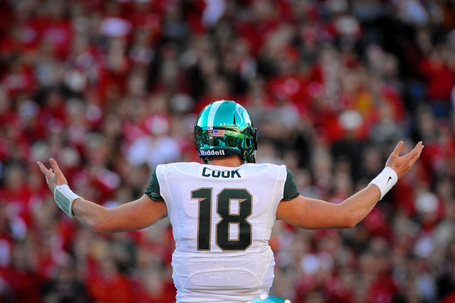 In the middle of a downpour, the Wildcats wore their "Wounded Warrior" uniforms against Michigan. The uniform, which received mixed reviews, will be forever overshadowed by theÂ complete collapse by the Wildcatsâ defense. 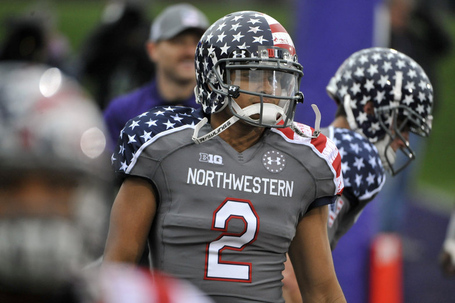 As reported earlier in the year, the Buckeyes will be wearing an alternate uniform against Michigan. The all-white uniform was originally stated to be a nod to the 1950 Snow Bowl, but Ohio Stateâs information director Jerry Emig recanted the statement, saying that the uniforms help the Buckeyes "stay cutting edge and take care of the players, who like wearing an alternate".

Per @LindLGHL the #Buckeyes will wear these all white Uni's vs Michigan. Thoughts? pic.twitter.com/iW9vfzEvr0

The Bears faced their toughest competition of the season, Texas Tech, wearing their chrome helmets and all-green uniforms. 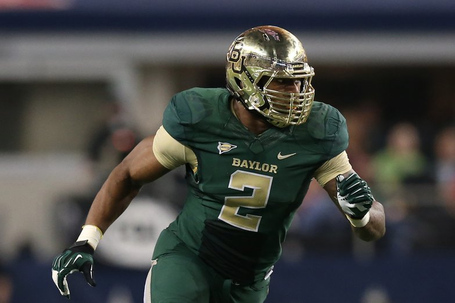 As is the weekly standard, the equipment staff tweets a picture of what the team will wear. In their top 10 matchup with Oklahoma State, the Bears will be wearing their away jerseys with black pants and a yet-to-be determined helmet.

Here is our uni combo for Saturday. Helmet will be revealed Sat afternoon #maynotbewhatyouthink #SicOSU pic.twitter.com/LxIO4Jt4VU

Having a perennial title contender on the hardwood, itâs easy to forget that the Jayhawks have a football program. The results on the field are less than desirable, and the uniforms the team wore in their rare win over West Virginia werenât any better. 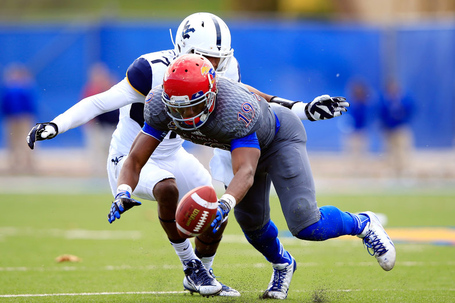 For their matchup with in-state rival Texas, the Red Raiders want to make it known that the "Lone Star State" is theirs with a special uniform. The team woreÂ red "State Pride" uniforms against the Longhorns last season, a 31-22 loss.

The Mountaineers,Â who updated their uniforms during the offseason, simply added a blue stripe to their white helmets. 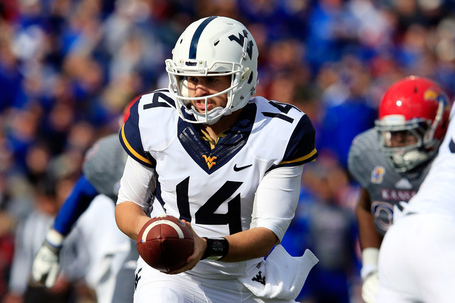 The Golden Eagles wore a yellow uniform with camouflage side panels in honor of Veteranâs Day. Unfortunately, the team'sÂ two-sided pants take the cake for the worst uniform faux pas in the country. 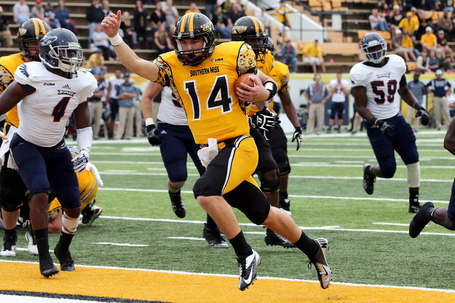 Originally scheduled for Toledoâs matchup with Navy in October, the Rockets wore uniforms that were accented in pink against Northern Illinois. The uniform featuredÂ subtle ribbons on the facemask and in the piping on the uniform. 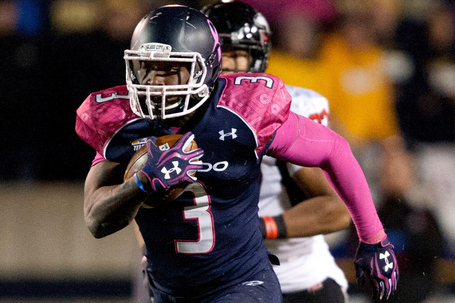 The Rainbow Warriors wore throwback uniforms on Retro Night against San Diego State. The team responded to how well they looked, as they came close to winning their first game of the season against the bowl-bound Aztecs. If only theyâd adopt these,Â or a similar look, full-time. 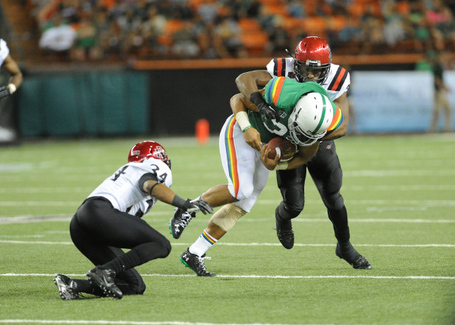 Before the Mountaineers move to the Sun Belt, the team will commemorate their last game at the FCS level by wearing their "Always Attack" uniforms. The gray uniforms, which will be auctioned off after the game, will be paired with a black helmet that features the universityâs vintage "Yosef" logo.

With a division title on the line, the Sun Devils will wear "Icy White" uniforms when they travel to Los Angeles to take on UCLA. The team vowed to wear a different uniform combination each week, and fans have been clamoring for this look all season.

To show military appreciation, the Ducks wore their "Support the Troops" uniforms against Utah. The team paired these uniforms, which were also seen during their spring game, with their "Sonic Boom" helmet. Along with the flag on one sleeve,Â the Ducks wore a patch that says "It Never Rains (at Autzen)", something the PA announcer and crowd say in unison before every home game. 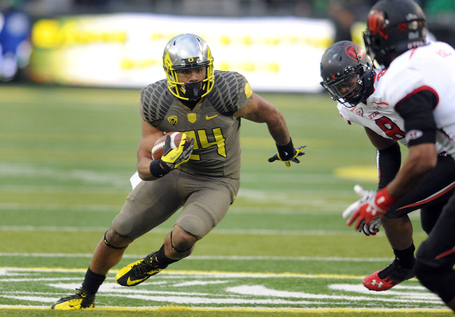 As the Razorbacks do annually, they'll be playing their final home game of the season at War Memorial Stadium in Little Rock (instead of Fayetteville). The team will be wearing their anthracite uniforms paired with a never-before-seen anthracite helmet. When the Hogs underwent a rebrand, a season ago, the team only unveiled their standard red helmet and a white lid.

While many would claim that gray is not an official school color and therefore it shouldnât be worn, donât tell that to the seniors who requested that the Volunteers wear their gray uniforms for their final game in Knoxville. The first time the team broke out the gray uniforms, they lost to Georgia in overtime. If the team falls to 0-2, donât expect to see them again.

Earlier this season, the Aggies were rumored to be wearingÂ gray uniforms, however, that never came to fruition. Pictures of anÂ alternate helmet have also arisen in recent weeks, but its legitimacy is unknown. However, a recent uniform update on NCAA Football â14 shows that the team has a "Dark Onix" uniform and a "Razorwire" helmet at its disposal. 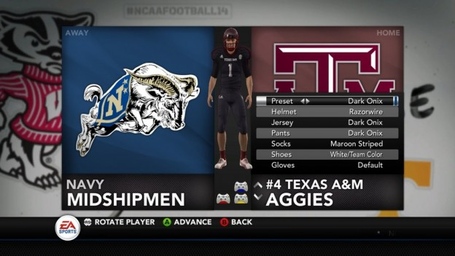