What Ohio State means to me

With Michigan week upon us, we take a few moments to reflect on what being a member of the OSU alumni and fan base really means.

Share All sharing options for: What Ohio State means to me

My journey towards becoming a Buckeye began in the same fashion as many, many others. It just started in a different place.

My parents were both raised in upstate New York (quick tip for Ohio folks talking to NY residents: there's a whole big state up there; very few of us are from the City), and thanks to a fateful convergence of circumstance, met for the first time as students on OSU's North campus. What this meant for my brothers and me was a childhood decked out in scarlet and gray, living for those fall Saturdays that ABC deigned to show us a game being played 400-some miles away. My earliest sports memory, in fact, is that of Joe Germaine leading the Buckeyes to a slim victory over Jake Plummer's Sun Devils in the 1997 Rose Bowl game.

Years later, as a student at Ohio State, I found that my story had also been true for countless others: family ties to the university, a deep and heartfelt connection to the football team, and an indelible single memory that made us mentally fast-forward to the day when we could wholly commit ourselves to OSU. For me, like so many, no other school was ever in the picture.

I spent four years in Columbus trying to figure out what Ohio State was, and have spent a year and a half in various parts of the world pondering the same thing

I spent four years in Columbus trying to figure out what Ohio State was, and have spent a year and a half in various parts of the world pondering the same thing. Thinking about what, exactly, your chosen institution means to you is something you have a lot of time for when you've got a long drive out to it from elsewhere: in my case, from Syracuse, New York. The destination was always the best part of the trip, which I suppose isn't difficult when the journey takes you through Rochester, Buffalo, Erie, and Cleveland along the way (speaking of Cleveland, I learned at OSU that you're allowed to say you're from there as long as your hometown falls within a 50-mile radius of the city).

About the only thing I've been able to conclude, for all my musings, is that The Ohio State University is an amalgamation of wonderful contradictions. It is the third-largest public university in the United States, a place where administratively you are no more than a number. Yet it also boasts a community of students, alumni, and fans that often feels more like a family than anything else. Ohio State is a place that, for all its tradition and history, is remarkably progressive. It is the single most diverse place I have ever set foot in, yet upwards of 85% of OSU students come from the state of Ohio. It is a place where you can sit through a class in which two-thirds of the students leave out the verb "to be", sentence after sentence, yet it is also a top research institution filled with brilliant minds. 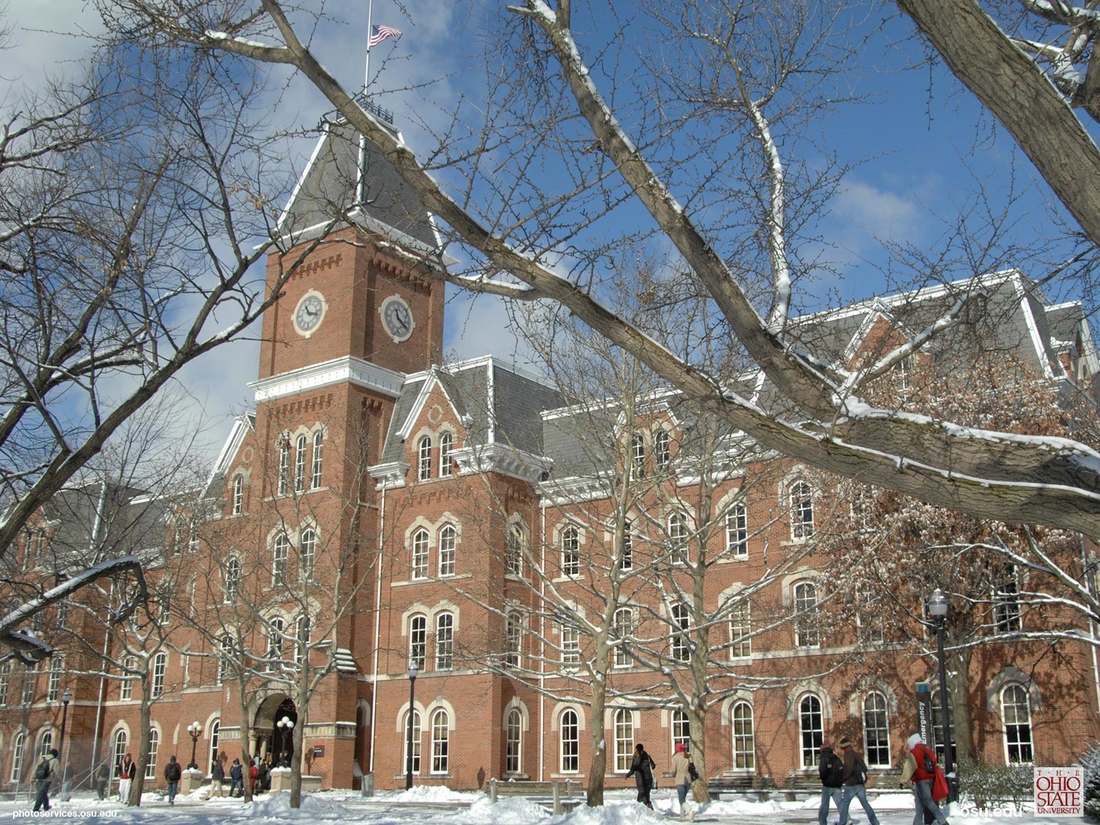 Do alumni from other schools get to feel the way that OSU grads feel? Do their memories of football Saturdays and bar crawls and class discussions still resonate years later, still inform who they are? Does fall feel as much like fall anywhere outside of Columbus? The bittersweet taste of experience, the whispers and shouts of memory that resurface daily, are Ohio State's indelible impression on me. Do students elsewhere get the joy of playing midnight football games under the lights on their very own miniature turf field, peppered by swirling snow and drunk with exhilaration? Or such gorgeous facilities in which to work and study? On my worst days, when work sucks and bills are nagging at me and the apartment is dirty, I can't help but feeling that my graduation from OSU was the worst surprise party anyone could have thrown for me and 10,000 friends. On my best days, I am nothing but grateful for getting to spend my undergraduate career at such a magical place.

I know that there are many, many good schools out there. Some of them even have football teams (though none have won their last 23 games and counting). But I can't help but feeling that it can't possibly be as special to proclaim yourself a Duck, or a Gator, or a Tiger, as it does to know that you're a Buckeye. Something about the culture of other universities feels forced, hollow, to someone as spoiled by experience as I have been. It is very, very difficult to be a casual Ohio State fan. Being a Buckeye runs deep with people. (So does inwardly scoffing at the fans and students of every other major university.)

This depth of feeling, this resounding love for our school and our teams, manifests itself in all sorts of ways. Home football Saturdays are the most obvious theater of Ohio State fanhood, everywhere from the Skull Sessions to the student section to the Victory Bell, where brothers of Alpha Phi Omega have pulled the cord for home victories since 1955. But Buckeye pride can be seen at any time, really: mid-week, mid-season, mid-life. Buckeyes give up their Spring Breaks to help others in need, all over the world. Buckeyes battle hunger in the spirit of outdoing That School Up North. Buckeyes dominate on the field, in the classroom, and even on the water. We pay it forward, like Woody taught us. You might have heard that our marching band is pretty good. Oh, and we throw the occasional party, too.

In a 2008 interview with Time magazine, the inimitable Neil deGrasse Tyson once discussed the most astounding fact he knew about the universe. What he said was as follows:

"When I look up at the night sky, and I know that, yes, we are part of this universe, we are in this universe, but perhaps more important than both of those facts is that the universe is in us. When I reflect on that fact, I look up--many people feel small, 'cause they're small and the universe is big, but I feel big, because my atoms came from those stars."

That's the way that I feel about Ohio State. For 4 years, I was in it, I was a part of it. But more importantly, it was and is a part of me

The way Mr. Tyson feels about the universe is the way that I feel about Ohio State. For four years, I was in it, I was a part of it. But more importantly, it was and is a part of me. I was one of 50,000 students on a single campus, but I have never felt bigger than I did in my four years in Columbus. I suspect that the same runs true for the hundreds of thousands that have come and gone on the same path. For those of you still there, or yet to go, know this: The Ohio State University, above all else, will make itself a part of you.