Taylor Lewan: The good, the bad and the ugly

Share All sharing options for: Taylor Lewan: The good, the bad and the ugly

Taylor Lewan was named an All-American in 2012 which was highlighted by his solid performance against South Carolina's Jadeveon Clowney in the 2013 Outback Bowl. He surprised the college football world by deciding to come back for his senior season, even though he was pegged as a top 10 pick in the 2013 NFL Draft.

Being named a 2013 preseason All-American, Lewan was expected to anchor an explosive Michigan offense that would contend for a Big Ten Championship. But the offense sputtered, and Lewan has since taken a brunt of the criticism for their failures. It has been a roller coaster ride this season for the potential first round pick with success early on, followed by accusations of dirty play to go along with an ineffective running game. We'll see which Taylor Lewan is going to show up for his final showdown against the Buckeyes.

Lewan matched up against 2012 consensus All-American Stephon Tuitt of Notre Dame and Lewan flat out dominated him. The offense had their best showing of the season against the Fighting Irish, scoring 41 points, totaling 460 yards of total offense and controlling the time of possession. The passing game was clicking, the running game was rolling on all cylinders and the offensive line was doing their job as a unit.

I rewatched this game and charted Lewan's individual performance versus various members of the Notre Dame front seven.

This is where Lewan had his way versus Notre Dame, in the run game. He abused Tuitt, holding him to an empty stat sheet in tackles, tackles for loss and sacks (he had an INT when lined up on the other side). Lewan showed off his strength and power in the run game, dominating any defensive lineman that lined up against him. The only issue with the Michigan running game versus Notre Dame was the lack of plays called to Lewan's side on numerous occasions. Yes, they ran to his side a decent amount, but it is clear that he is the best lineman on the team and they should be running behind him more often. 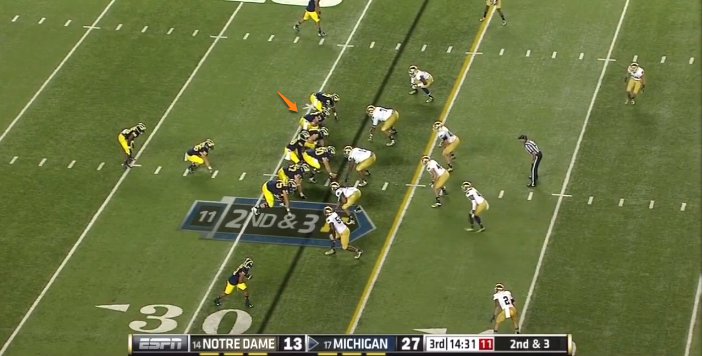 Michigan is looking to run the ball on 2nd and 3 from their own 32 yard line. 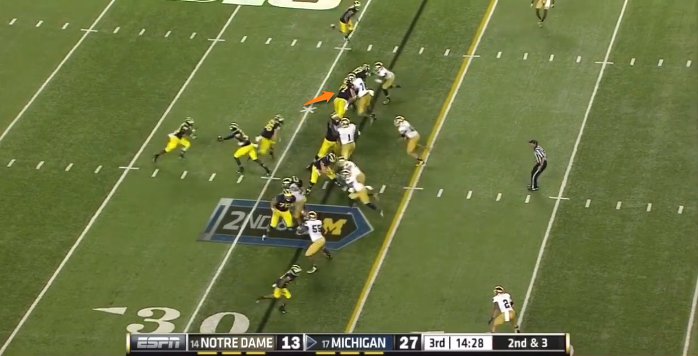 Lewan kicks out Tuitt while Gardner hands the ball off to Toussant to run power designed to go through the B-gap (between the guard and tackle). 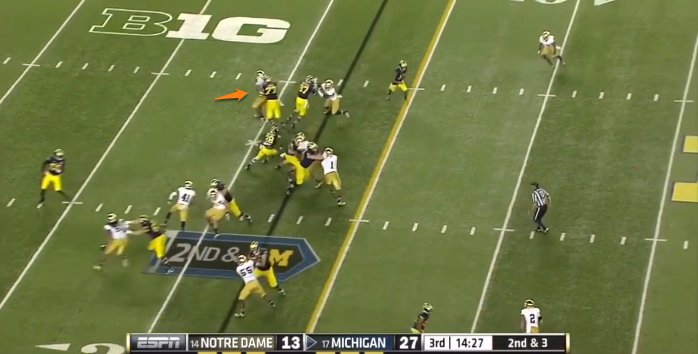 Lewan puts Tuitt on roller skates and kicks the 6-7, 312 lb defensive lineman completely out of the play as Toussaint easily gains the first down. This was not the only time this happened as it actually occurred on many occasions throughout the game.

Lewan was very solid in pass protection and only had one mishap which was both his fault for letting Gardner get hit but also Gardner's fault for not throwing the ball away on Tuitt's interception that was caught for a touchdown. Other than that, Lewan showed his very strong pass protecting mechanics and footwork, which standout when watching the film compared to the other linemen on the team. Lewan possessed a solid base and kept the defender away from his body, something that he struggled with during parts of last season. He protected Gardner's blindside for the entire game and that is the most important thing, especially when going up against a talented Notre Dame front. 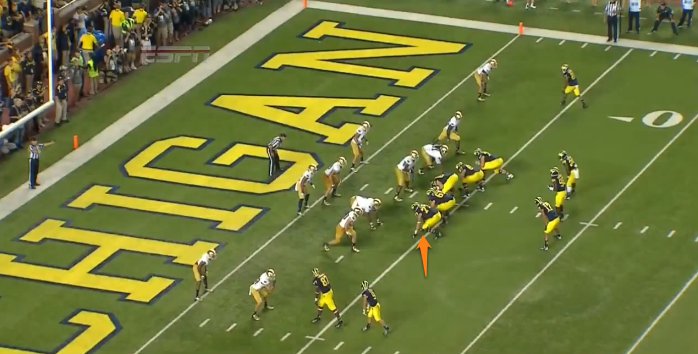 Here is the Wolverine offense up by four points and ready to finish off Notre Dame. This is an example of the offensive line working together as a group to give Gardner enough time in the pocket to make a play. 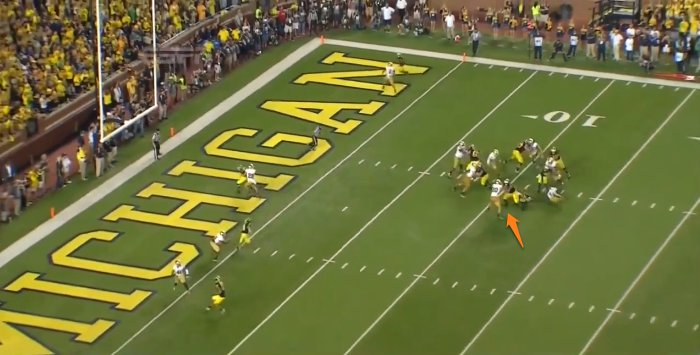 Notre Dame brings a blitz off Lewan's edge, freeing up Tuitt for the running back. It is actually blocked correctly and the left side of the line does a good job handling the pressure. Lewan picks up the outside rusher, the running back cuts Tuitt at the last second and the left guard picks up a blitzing linebacker coming through the B-gap. This gives Gardner just enough time to throw the game sealing touchdown.

Although the team struggled early against Akron and Connecticut, they went into the Michigan State game 6-1 and still in contention in the Legends Division if they left East Lansing with a victory. The offense laid an egg, rushing for -48 yards against a tough Michigan State defense and more importantly lost valuable ground in the division. Toussaint rushed for a measly 20 yards on eight carries and Gardner ran the ball 18 times for -46 yards.

The offensive line was under fire and they needed a bounce back game against a very poor Nebraska defense. Instead of rallying his offensive line against the 'Huskers, Lewan and the rest of the line struggled once again, as the team rushed for -21 yards. Freshman Derrick Green had eight carries for 11 yards, Toussaint gained six yards on nine carries and Gardner had -32 yards on 16 carries. In those two games, Gardner was sacked an astounding 14 times and it looked like the offensive line, which is led by Lewan and senior Michael Schofield, had given up. Nebraska blitzed the B-gap and the Michigan offensive line had no communication at all and looked clueless the entire day.

This is when people started to question Lewan as a leader and as a player. Has his draft stock slid after his team posted back to back negative rushing yards? I highly doubt Ohio State's senior left tackle Jack Mewhort would allow those types of performances to happen to his offensive line on back to back games. Will Lewan rally his line for his final game against the Buckeyes or is he more on autopilot until the combine?

Lewan has a reputation of being a somewhat dirty player and some have compared him to a Richie Incognito type (the college version, not like, the terrible locker room variety); a player that is very talented but has resorted to cheap tactics, drive killing penalties and dirty plays after the whistle. He plays with a mean streak, which is good for an offensive lineman if it is controlled, but it has also, at times, hurt the offense during his tenure. During the Michigan State game, Lewan was seen grabbing the face mask of several Michigan State defenders. He also has a tendency to get his hands up in the face of defensive linemen and gets away with a lot of holding calls. If the Buckeyes can get under his thin skin, he could retaliate with a 15-yard personal foul penalty, which would be a true drive killer.

"No one talks about offensive linemen because most sports fans cannot properly evaluate their play. Lewan plays my position. He's been embarrassing. The ridiculous and selfish unsportsmanlike conduct penalty he received in Saturday's game is indicative of his play all season. He's resorted to cheap shots and bullying because he failed to adequately prepare to have a dominant senior season.

He's coasting. He turned down NFL millions last April to return for his senior season. You can see the entitlement and arrogance every time he lines up. He's Michigan's captain. He's slumming in Ann Arbor for one more season, and he thinks everyone in maize and blue should be thankful to be in his presence"