Columbus may be far away, but for one glorious week, it's just down the road.

Share All sharing options for: Ohio State-Michigan: The expat's song

Seeing all these Mirror Lake posts earlier this week warms my heart, all the way here in rural North Carolina, where I'm typing. Writing about college football and Ohio State does allow for some trafficking in nostalgia, and reading about one of Ohio State's greatest traditions always make me think of my jumps, and how that has brought Michigan Week to life for me.

I jumped in Mirror Lake twice, in 2007 and 2008. The first time was especially memorable, as I only recently transferred to the main Columbus campus, by way of American University and a brief sojourn at the Newark Campus.  I hadn't done a great job at acclimating to my new school, and often spent my weekends back in Licking County, either to cover a football game for one of the newspapers I was contributing to, or just to hang out with my old, familiar high school crowd. I hadn't done much to take advantage of "The Ohio State Experience", as it were, and even though my apartment on Chittenden Ave wasn't far from Mirror Lake, my plan for the night was to rehearse with a band, and call it a bit of an early night.

A high school friend of mine called me, begging to at least *go* to the Mirror Lake jump, and as soon as she sensed some cracks in my wall of hesitation, switched to insisting I actually jump in the lake. For whatever reason, I eventually relented, and joined her and some of her sorority friends, but only after I bundled up. I brought a t-shirt, a hoodie, some old jeans and a hat, and put everything on over my swim trunks. The plan, like with thousands of other students, was to strip down once I got to the lake, wade around for a minute, get the Facebook profile picture, and get out. Right before I stepped into lake, I handed a bag with my clothes to the friend, who promised to look after them while I did Mirror Lake things. 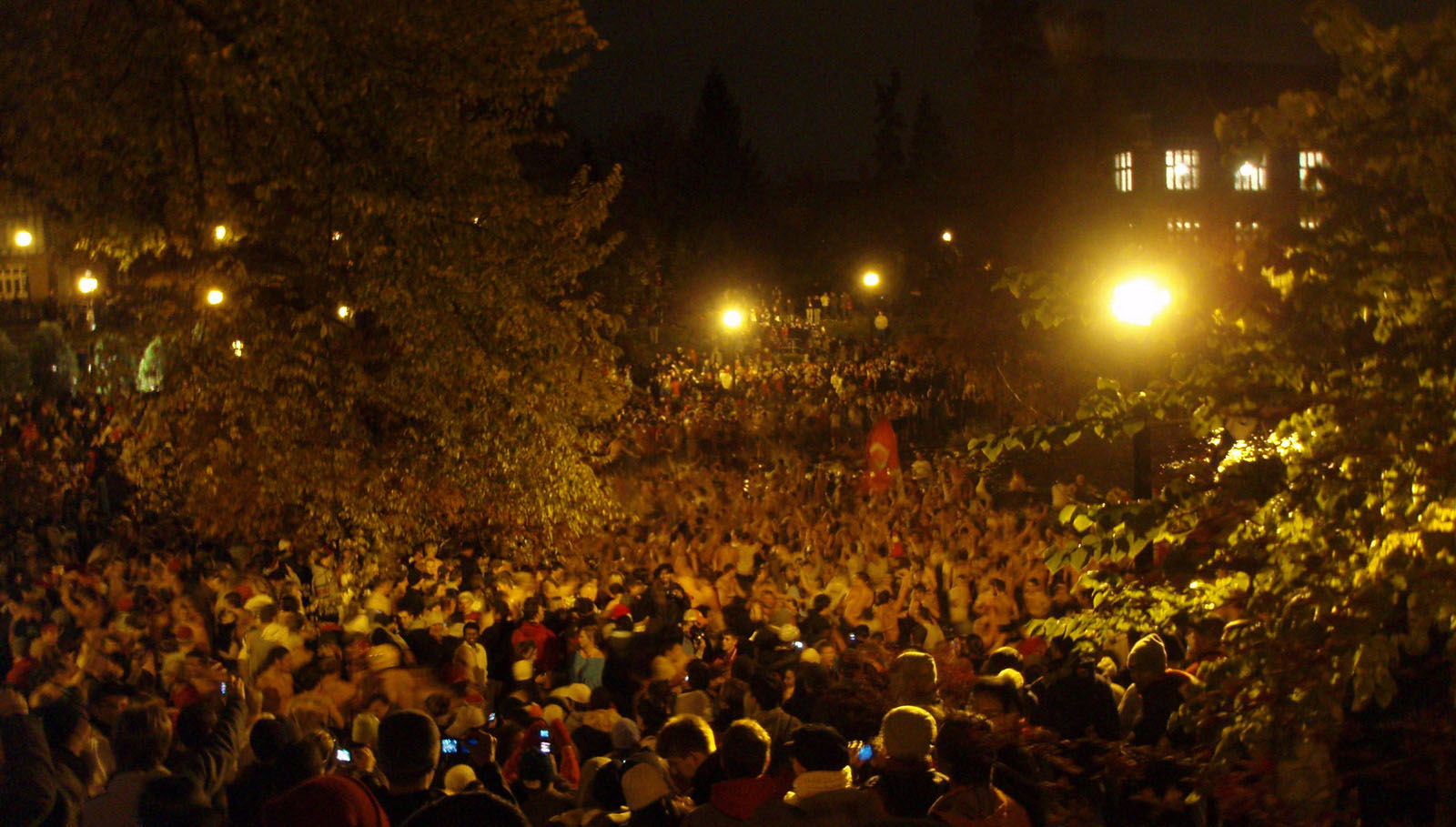 You guys have seen the pictures: the sight of a throng of thousands yelling, laughing, singing (WE DON'T GIVE A DAMN, etc) and doing something completely illogical (jumping in a damn lake while it is SNOWING) was totally foreign to me.  American University had no tradition that came even close to something like this. In fact, other than getting drunk at Presidential Debate Parties, I'm not sure I could think of an American U tradition at all. This was my first real exposure that I was now a part of something huge, with a real vitality, a real energy, and I LOVED it. I got my picture, added my full throated exhortation for Michigan to fornicate with themselves, and then climbed out of the lake, thoroughly freezing.

It was dark, and it took my a while to wade through the crowd, although it probably wasn't hard to find me, since my teeth were chattering hard enough to be heard from Zanesville. I eventually found my friend and her sorority companions and asked for my clothes back. They claimed they never got them. Maybe they were a little buzzed and wasn't paying attention. Maybe somebody stole my clothes. Maybe they were taken by mistake. Maybe this entire operation was some sort of elaborate hazing hustle. The distinction, at this point, is academic. The point was, it was snowing, and I was only clad in flip flops and wet swim trunks, and needed to sprint back to Chittenden Ave, before my blood turned into a Slurpee.

"Sorry officer, I'm just a Mormon kid who has made a terrible life decision"

Running in flip flops is hard. You have to pinch your toes together a little, and it comes out like some sort of ridiculous semi-waddle. While I was stopped at a stoplight, one of the police officers sitting atop a horse couldn't help but take notice, and maybe pity, on my predicament. "Son, I really hope you're drunk right now."

I laughed. "Sorry officer, I'm just a Mormon kid who has made a terrible life decision."

I sprinted back, just as my chest hairs froze, and promptly threw myself into the bathroom of my hovel of a studio apartment, where I lived above a convict who watched over my car and apartment in exchange for occasional beer bribes, and blasted my body in hot water. I itched like crazy as I finally started to thaw, and I LOVED IT. It was dangerous, stupid, uncomfortable, and impulsive, but now that I'm a boring, married adult with actual responsibilities, I'm glad I have that memory. I jumped the next year with some fraternity brothers, and had an even better experience (and without tragic wardrobe malfunctions).

It's easy to hate Michigan for football reasons, and we've gone into all of those reasons in great detail here. What makes this rivalry so special isn't just the characters and the Xs and Os, but how it's become an institution of its own, bringing people together. People don't come together to sing and yell and jump in an ice cube over Penn State, or Chemistry, or an English Lit paper. We come to college to get educated, to learn a few skills and come away with that accredited fancy piece of paper, but we come back because of those connections and traditions.

I haven't lived in Ohio since the day after my graduation, when I got on a flight for my teacher training in Arizona. I probably won't move back to Ohio in the near future (attention hiring managers of Greater Columbus, if you'd like to change this, I'm on LinkedIn), but I did live there for over 20 years. Being an Ohioan is part of my identity, and there isn't an easier way to express that identity during this time of year than by hating Michigan.