Share All sharing options for: Ohio State vs. Michigan 2013: The Game Preview 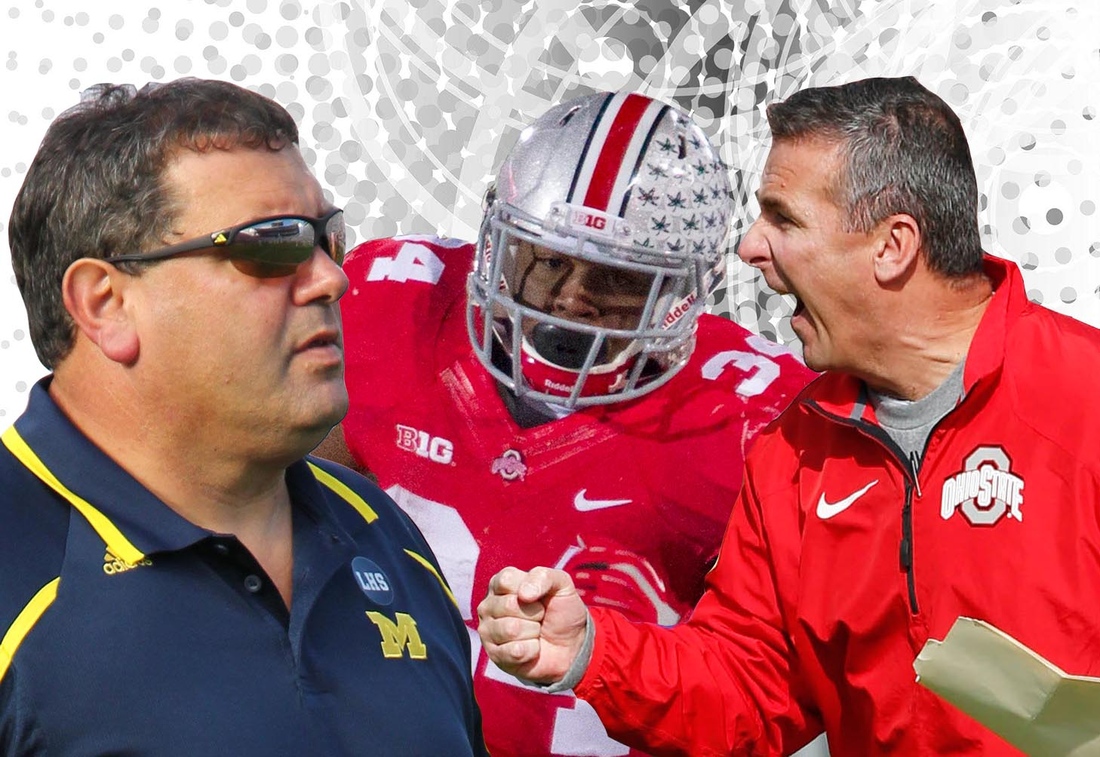 1) Shutting down the pass: If there was a fault to be found this year with Ohio State, it would fall with the pass defense. While it didn't help when starting safety Christian Bryant went down late in the Wisconsin game, that was after Jared Abbrederis was having his way with Bradley Roby. Having already announced his intentions to declare for the 2014 NFL Draft, Roby could help his stock by shutting down Jeremy Gallon. On the season Gallon has eclipsed the 1,000 yard receiving mark, becoming the 10th Wolverine to do so.

2) Pressure, pressure, pressure: In the victory over That State Up North, one of the more iconic plays was Adolphus Washington's destruction of Taylor Lewan to get a sack. This year could feature more of the same with the issues Michigan's offensive line is having. Not only has Michigan had problems running the football lately, totaling negative yardage in consecutive games against Michigan State and Nebraska, but Ohio State has been excellent at stopping the run. The Buckeyes join Wisconsin and Syracuse as the only FBS teams that haven't allowed a running back to gain 100 yards in a game this season.

This should allow the Buckeyes to pin their ears back and let the defense harass Gardner. While the Buckeyes might not always get to Gardner, they might make him make some costly mistakes. On the season Gardner has 11 interceptions, but only one in the last five games. Some heat from Bosa, Spence, and company could knock Gardner back to early season form.

3) Another brick in the wall: Ohio State has won nine of the last eleven in this series and really the only recent Wolverine win was in 2011 when Luke Fickell was at the helm for the Buckeyes. Given the struggles of Michigan down the stretch, not many are giving the Wolverines a chance (the Buckeyes are 16-point favorites) . The Buckeyes can't get complacent and take anything for granted in this one.

With the respect Urban Meyer has for this rivalry, it's hard to see the Buckeyes taking anything lightly. Still, less than stellar starts against Northwestern and Iowa linger in the minds of Buckeye fans. The best thing for Ohio State is a hot start, much like the Buckeyes have had in the latter half of the season, putting the foot on Michigan's throat and putting them in a hole they can't dig out of as soon as possible.

This game is always the biggest of the season for Michigan (7-4, 3-4), but this year The Game takes on added importance, as it is the last potential chance for redemption that the struggling Wolverines can still reach for before a long dark offseason full of questions and discontent (and a crappy bowl game). Michigan's season has fallen apart after a solid start that pushed the Wolverines on the edge of the top-ten. The offensive line has been completely unmasked as incapable, and as opposing teams have figured this out, they have brought more and more pressure, which has ground the UM offense to an almost complete halt. A win in Columbus is the last chance Brady Hoke has to extend the honeymoon phase he's coached in since his arrival in Ann Arbor — although it may not be able to save the jobs of a few offensive coaches.

If Michigan is going to steal a win, it is going to take a superhuman effort from the defense to keep Ohio State's offense in check. Michigan's strength this season has been its run defense, and the Wolverines are one of the best teams in the nation on a rush yards per play basis (15th, 3.23). A big part of this is that Michigan hasn't let many teams break off long runs. The Wolverines have only given up five runs of 20+ yards all season, and this has helped Michigan force opponents to grind out long drives to score touchdowns. Michigan's run defense will need to be especially ready in this one, as Ohio State presents a very dangerous spread running attack that can pound up the middle or get the edge. If Michigan is going to win, it will have to hold Ohio State's run offense to somewhere around three yards/carry.

The benefit of this is that it puts teams in more obvious passing situations. Michigan's secondary hasn't been elite in pass defense, but it has played above average in both per play defense (6.7 yards/attempt allowed) and pass efficiency defense (118.17, 32nd nationally). Perhaps the most important aspect of Michigan's pass defense has been its ability to force turnovers. The Wolverines have 16 interceptions on the season, and that comes from all over the back seven.

Corners Raymon Taylor and Blake Countess have shown the ability to make plays in man coverage and bait quarterbacks into poor decisions against zone defense, while Michigan's opportunistic safeties have helped out with interceptions on inaccurate passes over the top. Both Braxton Miller and Kenny Guiton have been excellent at avoiding turnovers in the passing game. If Michigan is going to win, it will need to force mistakes and set its offense up with good field position on turnovers.

Finally, the most important key to Michigan doing the improbable is whether or not Michigan's offense can find a way to put points on the board. Over the month of November, it has put together just one drive of over 60 yards that ended in a touchdown, and four drives of 50+ yards that ended in field goals. Against Iowa last week, Michigan scored its two offensive touchdowns on drives of 47 and 28 yards. There is no single key or question this offense has to answer: everything is broken or on fire.

The Wolverines have spent the last month being completely ineffectual and throwing away chance after chance to put up points. The offense has converted just 12 of 60 third downs and twice was held to negative rushing totals. Against a tough Ohio State defense and high scoring offense, everything will have to go right and Michigan will have to find a way to play an offensive game similar to what it did two months ago against Notre Dame. Given the depths to which this offense has fallen since that game, it has felt more like two decades since that night in Ann Arbor. It would be a minor miracle for Michigan's offense to put up enough points to keep this game close.

by Zach Travis and Brett Ludwiczak 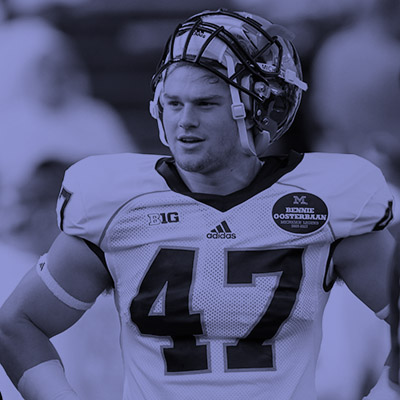 Michigan has played most of the year without Jake Ryan due to an ACL injury suffered in spring camp, and even as he has worked back into the lineup over the last month there have only been flashes of the Jake Ryan fans saw last year, the one that was equally able to make plays in space while taking on blocks and rush the quarterback. However, his improvement has been steady since returning to the field against Penn State and he had a big part in Michigan's defensive touchdown against Iowa, forcing the errant pass that was picked off and returned for a touchdown. Against an offense like Ohio State, a player like Jake Ryan is very important, as he gives the defense the size and strength it needs to make plays against the run, while adding the athleticism to make plays from sideline to sideline. 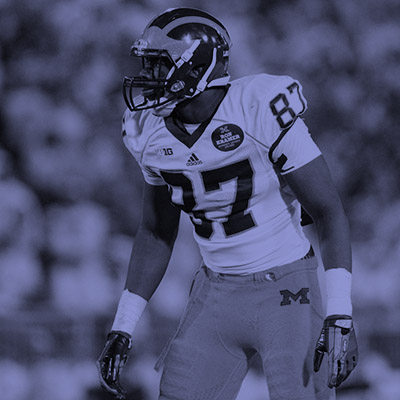 While the depth chart may list him as a tight end, Devin Funchess is now that in name only. He will occasionally line up with his hand in the dirt, but that almost always tips pass. What he is is an enormous and talented wide receiver that Michigan will use on the outside and in the slot. At 6'5 230 lbs, Funchess has the size to be a matchup nightmare for opposing secondaries. He is also faster than one would expect, which makes him a capable deep threat on the outside even against corners. Despite playing as a tight end during the early stages of his career, Funchess has shown an uncanny ability to get separation with crisp routes. The biggest issue lately has been a case of the drops. If Funchess is on, he is an incredible weapon that takes pressure off Jeremy Gallon and the rest of the receiving corp. Michigan will need him to be in top form Saturday. 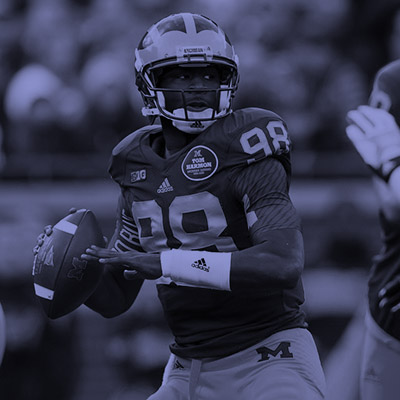 This season has shown that while Michigan might not always win because of Devin Gardner, it certainly can't win without him. The accelerated struggles of the offensive line over the last month have battered and bruised Gardner and caused him to be more tentative and less likely to try and force throws. However, he remains Michigan's best run threat, its most creative playmaker, and a capable down field passer – if somewhat inconsistent in that regard. If Michigan wins on Saturday, it will be thanks to a superhuman effort from Gardner. Although given the deep-seated offensive issues present on this team, there are no guarantees that a superhuman effort from Gardner is even enough to keep this game close. 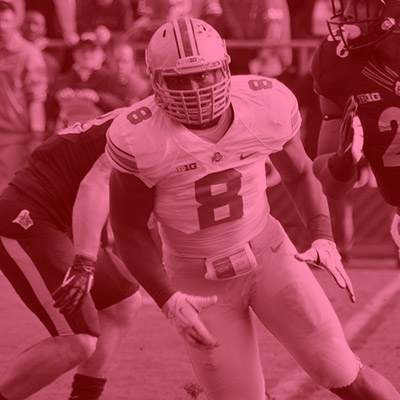 In his sophomore season, the Harrisburg, PA native sits second in the Big Ten with 7 sacks. Spence should be able to get in Gardner's face throughout the day. Gardner has been turnover prone not only passing the football, but also with fumbles this year. It wouldn't be surprising to see Spence get a sack/fumble and/or fumble recovery in the game. 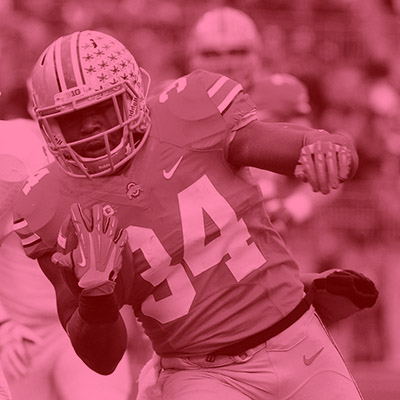 While Hyde is an obvious weekly pick in our previews, it's because he really means that much to the offense. Last week saw Hyde become Urban Meyer's first 1,000 yard running back. The Buckeyes can play it a couple different ways on Saturday. Either they run Hyde early and open things up for some play-action, or they use the pass early to set up Hyde to punish the Wolverines later in the game. Either way, expect the senior to have a strong game. 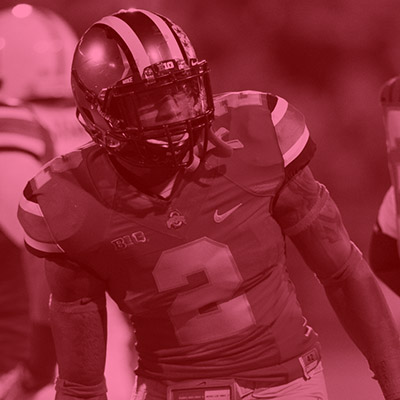 After recording 20 tackles against Indiana last week, Shazier's attention will turn to stuffing freshman Michigan running back Derrick Green on Saturday in Ann Arbor. The highly touted former 5-star running back has only just now begun to see number one back responsibilities, but a day going toe-to-toe with Shazier could prove a rude awakening. A big performance from Shazier, who leads the Big Ten in tackles, tackles for loss, and forced fumbles,could go a long way in earning him 2013 Big Ten Defensive Player of the Year honors.