Former Ohio State offensive tackle Mike Adams spoke with Land-Grant Holy Land about his role in the tattoo scandal, his former teammates, as well as the rigors of the NFL.

Share All sharing options for: Ohio State, Pittsburgh Steelers' Mike Adams talks about rebuilding his image in the NFL

Despite being suspended for the majority of his senior season for his role in Ohio State's memorabilia-for-tattoos scandal, as well as failing a drug test at the NFL Combine, Mike Adams impressed his hometown Steelers enough to be picked in the second round of the 2012 NFL Draft. Adams, who worked his was into a starting role with the Steelers as a rookie, sat down with Land-Grant Holy Land to discuss his role in the tattoo scandal, his successes and struggles since entering the league, as well as a host of other questions.

It’s just way different. You have to put a lot more time into it. In college, you can just go out there and play and you’ll be better than the person you’re lined up against. In the NFL, though, there’s a lot more mental stuff. You have to study more, watch film, and so on. It just takes time to get used to.

It’s just easy to enjoy the situation I’m in. I haven’t had the easiest road here, but I’m just glad I’ve made it as far as I have.

What is your weekly schedule like, both on and off the field?

I got into MMA in the offseason, so I do that all the time. When I’m not at practice, I spend a lot of time by myself. I’ll go home and watch film on my iPad. On Thursdays, the offensive line goes to Maurkice Pouncey’s house and we’ll watch a couple hours of film together. 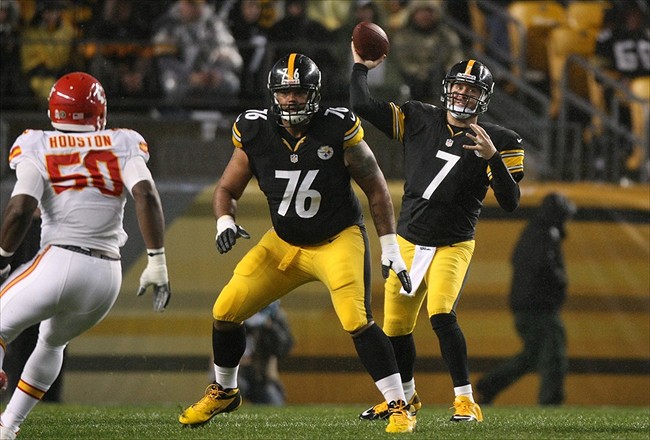 Where were you projected to go in the draft and what was it like to be picked by your favorite team?

I was projected to go somewhere late 1st round or the 2nd round. I got in trouble, which basically threw all of that in the air. I really had no clue where I was going to go. I was afraid that I wouldn’t even get picked. In the end, though, Coach Tomlin really liked me and I couldn’t be happier to be in Pittsburgh.

I've made some mistakes, but I've learned from them

When you were a junior at Ohio State, you were one of the five players named in the memorabilia-for-tattoos scandal. What did you learn from that situation?

It really built my character. I’m not a bad guy and I’ve made some mistakes, but I’ve learned from them.

Despite that, do you feel like Ohio State fans can look past that when they look back on your time in Columbus? What do you think they’d say about your career?

I just hope they’d talk about all the games we won. We won a Rose Bowl, Sugar Bowl, and went to a Fiesta Bowl when I played. Same with Tressel and TP. We had a lot of great players and won a lot of games during my career.

Would you compare the diehard Ohio State fans to the yinzer Steelers fans?

Buckeye Nation is in a league of their own

You can’t compare them. Steelers’ fans are faithful, but Buckeye Nation is in a league of their own. College football is better than the NFL, in that aspect. It’s just an awesome atmosphere that you can’t compare.

Growing up, was making it to the NFL always a dream of yours?

Absolutely! I started playing football when I was six and I’d watch the games on TV. Making it to the NFL and winning a Super Bowl have always been a dream of mine.

If football didn’t work out, what would you be doing right now?

I’d probably be in school still. I went to school for criminology, so I’d try to be like a US Marshall or something else in law enforcement.

Do you keep in touch with any of your former teammates or any other former Buckeyes?

I talk to TP all the time. All the guys in my class keep in touch with each other. I talk to JB Shugarts and Michael Brewster almost daily; Jake Stoneburner, too. We’re all extremely tight.

What is your favorite memory in the Scarlet and Gray?

I’d say the Sugar Bowl against Arkansas. The whole country was against us. Maybe the win over Iowa that sent us to the Rose Bowl. Any win over Michigan is up there too.

Would you say that you have had a career-defining moment with the Steelers?

Not yet. I’ve played in some games, but nothing really sticks out. I’m just waiting for it to happen. I guess that you don’t really know until your career is over.

Whether it was high school, college, or the pros, who has been the most intimidating player you’ve ever faced?

Nobody is really intimidating. There are a lot of really good players, but I can’t say that one is more intimidating than another. It’s just fun going up against these guys.

Finally, how do you think the Buckeyes finish the season?

Ohio State is always going to be one of the best programs in the country. There’s a reason we’re THE Ohio State University

I think they go undefeated, but it’ll be terrible if they don’t get to play for a national championship. I know they’re working hard everyday. I hope they get a shot to beat a SEC team or Oregon. Even if they don’t get to go to the national championship, and have to settle for a Rose Bowl, it just shows that Ohio State is always going to be one of the best programs in the country. There’s a reason we’re THE Ohio State University.