Ohio State-Michigan: The root of all hate

Tucked away in Northwest Ohio, two of the greatest players in Ohio high school football history battled as rivals at the prep level and then in “The Game”.

Share All sharing options for: Ohio State-Michigan: The root of all hate

Separated by only 25 miles, the hate between Fostoria and Fremont Ross during the 1990s was only rivaled by that of Ohio State and Michigan.

Fostoria and Fremont are quite alike. Built by factories earlier in the century, the blue-collar cities would pause on Friday nights in the fall to watch their respective teams. While each team has their share of wins (each are among the winningest programs in Ohio prep history), none were more memorable than the legendary encounters between Damon Moore's Fostoria Redmen and Charles Woodson's Fremont Ross Little Giants.

The height of this bitter rivalry culminated during the 1993 season, Moore's senior season and Woodson's junior year. Enter Friday night at Fremont's Harmon Stadium. Coming off of back-to-back state championship game appearances, the Redmen came into the game with an unblemished record. Likewise, the Little Giants were also undefeated and ranked among the top ten teams in the state.

Moore, who played quarterback and safety during his senior season, battled Woodson, playing running back and cornerback, all night as Fostoria pulled out a 7-6 win. The teams played evenly throughout the contest, with the difference being a blocked field goal at the end of regulation. The Redman finished the regular season undefeated, before succumbing to Columbus Eastmoor in the playoffs, but handed the Little Giants their lone loss of the year on this night.

In their three high school matchups, Moore never lost to Woodson and the Little Giants.

While these two rival schools no longer battle on the gridiron, with conference realignment as the culprit, the rivalry between Moore and Woodson was taken to the next level when the two chose to attended Ohio State and Michigan, respectively.

Had both chosen to play their college football in Columbus, the Buckeyes defense could have been among the best in history. However, Woodson had his mind made up at a very young age.

"I'm going to be ‘Mr. Football'. I'm going to Michigan and I'll win the Heisman Trophy," Woodson told the editor of the local newspaper.

Before he even stepped foot in Ann Arbor, Woodson had already checked "Mr. Football" off his list. As a senior, Woodson amassed over 2,000 yards on the ground, paired we 32 touchdowns, as he led Fremont Ross to the state playoffs. 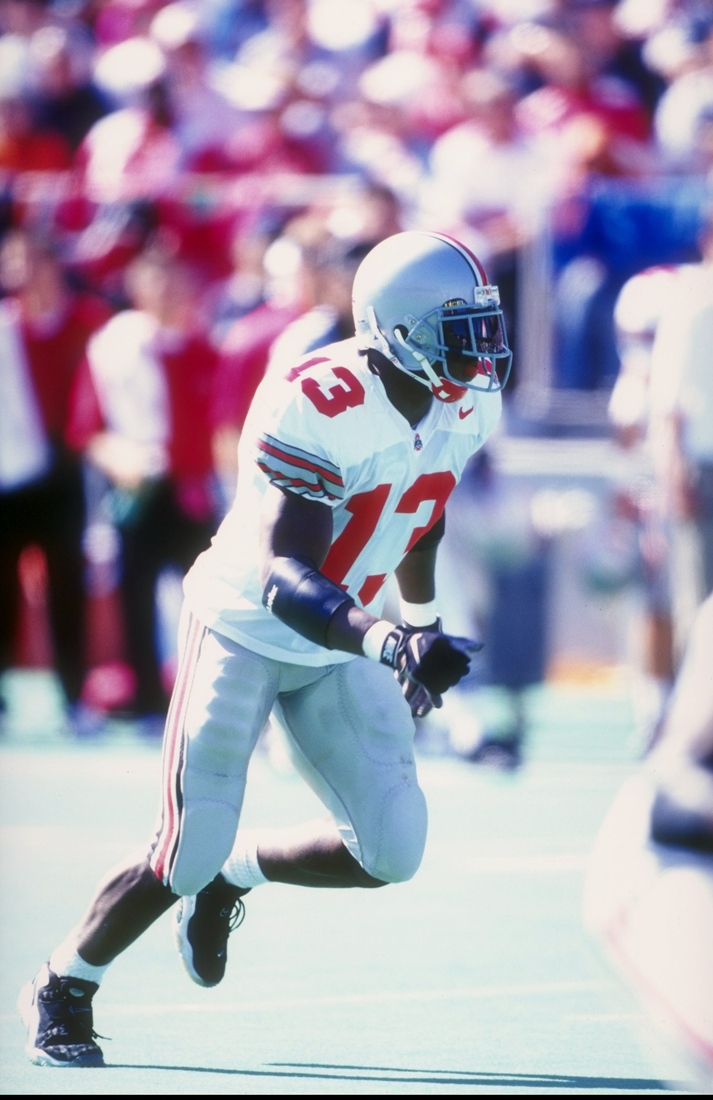 Moore, meanwhile, was being redshirted at Ohio State.

The two met for the first time in college, with the Buckeyes dreaming of a Rose Bowl berth and the Wolverines relishing the role of spoiler. In fact, the 1995 Buckeyes were so confident in themselves that wide receiver Terry Glenn called the Wolverines "nobody".

As a true freshman, Woodson blanketed Glenn and picked off two passes as the #18th-ranked Wolverines shocked the Buckeyes and sent them to the Citrus Bowl.

While Woodson was named the Big Ten Freshman of the Year, Moore only made appearances in 12 games that season. Recognizable names were few and far between as the Buckeyes' defense was overshadowed by their record-setting offense, led Heisman winner Eddie George.

During their sophomore seasons, the two met under similar circumstances with similar results. Undefeated and 2nd-ranked Ohio State hosted #21st-ranked Michigan with a trip to the national championship on the line. Not only did the Wolverines once again hand the Buckeyes their first loss of the season, but Woodson began to be featured in an offensive role. Catching 13 passes and rushing 12 times for 316 yards of total offense, Woodson's Heisman campaign was off and running.

That same season, Moore had worked his way into the starting lineup on a defense that included names such as Andy Katzenmoyer, Mike Vrabel, and Shawn Springs. Despite being underappreciated, Moore led the team in tackles in 1996. Moore became the first non-linebacker to lead Ohio State in that category in almost 30 years.

That same season, Moore tied a school-record by intercepting three passes in a game, returning two for a touchdown. Despite the loss to Michigan, the Buckeyes represented the Big Ten in the Rose Bowl against Arizona State. In the win over the Sun Devils, Moore led the team with 12 tackles. 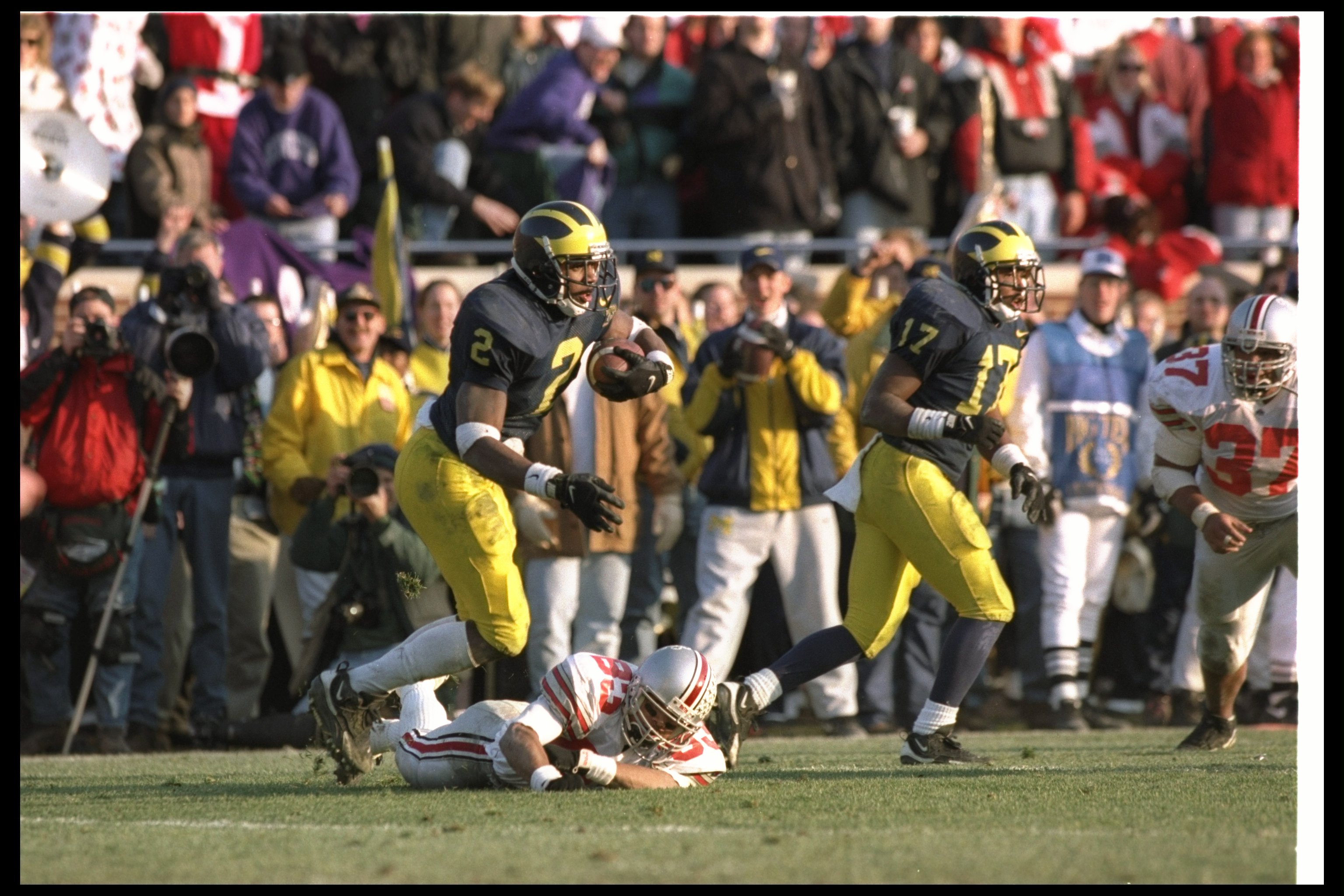 As the 1997 season began, many pundits wrote off Michigan, as the Columbus Dispatch noted that the Wolverines had "lost much of its aura." In a turn of events, however, Woodson led the Wolverines to their first Rose Bowl since 1992 and the chance to play for the national championship.

In a 20-14 win over Ohio State, Woodson had a punt return touchdown, a touchdown reception, and pulled in an interception in the endzone. The game wrapped up the Heisman Trophy for Woodson, who became the first primarily defensive player to win the award.

On the other sideline, Moore was having quite a season for himself. The redshirt junior was recognized as All-Big Ten at safety after intercepting three passes and tallying five tackles for a loss. Whether it was defending a pass or in run support, Moore was one of the most complete players in the country.

Woodson's college career came to a picturesque ending as he led the Wolverines to their first national championship since 1948. In the Rose Bowl win over Washington State, Woodson intercepted another pass in the endzone to end the Cougars chance at an upset.

That night, Moore and the Buckeyes had trouble defending the potent offense of Florida State, as Ohio State fell 31-24. This bitter taste caused Moore to return to Ohio State for his senior season.

Woodson made himself draft eligible after his junior season, and was drafted in the 1st round of the 1998 NFL Draft by the Oakland Raiders, where he was named the NFL Defensive Rookie of the Year.

Moore completed his career at Ohio State in 1998, garnering All-American honors as a senior. His 81 tackles led the team for the second time in his career, but yet again, a team from Michigan kept him out of the national championship. This time, however, it was Nick Saban's Michigan State squad that upset the Buckeyes.

After graduating from Ohio State, Moore was drafted by the Philadelphia Eagles in the 4th round of the 1999 NFL Draft.

The players' careers continued to take different paths, as Woodson was named to the Pro Bowl in 1999, while Moore fought to start with the Eagles. The pair met one last time, as Oakland traveled to Philadelphia, but neither recorded any statistic of note in the Raiders 20-10 win.

Both had tastes of team success early in their career, as Woodson's Raiders reached the Super Bowl and Moore's Eagles reached the NFC Championship. Unfortunately, that game marks the end of Moore's career.

In the loss to the St. Louis Rams, Moore tore his anterior cruciate ligament (ACL) and was placed on the physically unable to perform list. He attempted a comeback with the Chicago Bears the following season, but was suspended for violating the league's drug policy, ending his career.

His retirement meant that the two would never have the opportunity to play one another again, ending their rivalry with four wins for Woodson and three wins for Moore. Since that day, Woodson has won a Super Bowl with the Packers and been named NFL Defensive Player of the Year, while Moore has been considered for a coaching position in his hometown.

Perspective on this rivalry is unique due to many factors. With Fostoria and Fremont equal distance to Columbus and Ann Arbor, it's not uncommon to see the cities littered with both Ohio State and Michigan fans.

As an Ohio State fan, we hate Woodson for what he did to the Buckeyes, but one wonders how history may have been different had Woodson grown up an Ohio State fan and said "I'm going to Ohio State and I'll win the Heisman Trophy."