The second stage of my adventures in Ann Arbor, where I braved a puddle jumper and eat a *delicious* sandwich.

My journey to Ann Arbor stared, weirdly enough, in tiny Greenville, North Carolina, where I was visiting family. Greenville does, in fact, have an airport (and as my mother likes to remind me, paved roads and everything else), although it's really only an airport in the literal sense of the word. Yes, you can catch a flight there, but no, it does not share much in common with what we generally associate with airports. It has one gate, one airline, and one destination (Charlotte), and we couldn't pass through security when we first arrived because the one guy in charge of that business wasn't at work yet. All we could do was stare at the empty conveyor belt.

The flight from Greenville to Charlotte is not long, but that means you don't get the pick of the aircraft litter. Short trips mean sojourns on veritable puddle-jumpers, where every tiny movement of the plane is amplified throughout the craft. On a jumbo jet, your place in the heaven feels unassailable and secure, but on some tiny propeller plane, you become acutely aware how precariously you sit in the sky. It's easy to think that one clumsy flail of the arm would shatter your dime store window, and cause you to be sucked out of the craft like the snakes at the end of Snakes On A Plane. I considered adding a spoiler alert there, but don't act like you haven't seen that movie six times already.

I am not normally somebody who considers himself afraid of flying. But recently, I've found myself gripping those armrests more and more, especially during takeoff, and double especially on these tiny aircraft. I suspect the transition happened gradually, as I grew out of my teenage invincibility and into that boring adult mortality, where, you know, bad things happen occasionally, and not just in articles that you read in The Atlantic or something, but in real life.

I've read all the statistics. I know the flying in an airplane is safer than driving a car, and these pilots are only the most serious of professionals, and that I'm probably more likely to die via hobo assault on the Chicago Blue Line than I am in a takeoff mishap somewhere in rural North Carolina, but that can't assuage my brief feeling on unassailable dread. I am fully appraised of the situation, and in my heart of hearts, know that I'm (probably) not going to plunge to my doom in some fiery inferno, but I am also aware that such a statistical possibly exists, and irrationally or otherwise, I find myself worrying about it for those few moments.

That's really the best way to explain how I feel about this football game.

I am quite familiar with the statistics. I know that Ohio State's offense is dynamic, explosive, multifaceted, and hasn't come close to being shut down all season. I know their defense has not surrendered a one hundred yard rusher this season, and their #3 ranking is not due to some historical accident. This is a really damn good football team, and one that deserves every bit of respect that comes from being favored by 14.5 points over what could be most charitably described as an average football team. One that struggles to run the ball under the best of circumstances, one lead by a dinosaur of an offensive coordinator, and whose team seems to be filled by a pervasive aura of negativity, if not outright impending doom. It is difficult to construct a strong argument, on paper, for why Ohio State could lose this game, as the Michigan graduate I sat next to on the flight from Charlotte to Detroit explained. "I don't know what you're worried about".

But that isn't the way football works. After the mid to late 1990s, where my formative football memories were forged, any sort of Michigan related PTSD could be forgiven. I remember years where Ohio State's teams were so dominating, if Twitter had been around back then, we'd make the BUT COULD THE BUCKEYES BEAT THE TEXANS type jokes....only to lose to freakin' Michigan. I write hundreds of articles a year based (at least somewhat) on logic and statistics and facts, but when it comes to this particular game, I can never let myself take full comfort in those numbers. Ohio State should beat Michigan fairly strongly. I expect Ohio State to beat Michigan. And yet, I can't shake a feeling that hey, something weird could happen.

That feeling continued once we landed in Detroit, an airport that was eerily empty at 6:30 PM on a Friday night, for what purported to be a major American city. That vague unease continued once I picked up my rental car, some fancy pants Prius thing that didn't resemble any automobile that I know in any appreciable way. There was no key, no radio dial, barely any room to change gears, and a giant iPad-looking display console took up half my dashboard. I had no idea how fast I was going (being able to read your speed is so 5 years ago), and drove into Ann Arbor powered mostly by faith and hope, than say, knowing what the hell I was doing.

I needed to resolve this ambiguous existential panic the best way I knew how. By eating a big ass sandwich. And I was told the best place to get one in town was Zingerman's Deli.

Zingerman's actually looked like a small neighborhood, a collection of buildings that housed the seating area, some shopping, and a fully functional deli, hanging dried meats and all. With us getting in after 7:30, the line was manageable (and with several scarlet-clad fans, a promising sight), but I imagine a lunchtime rush would have been formidable. The menu was giant, over 70 options, but I eventually settled on some sort of giant spicy chicken sandwich, and my wife Taylor grabbing a massive BLT. 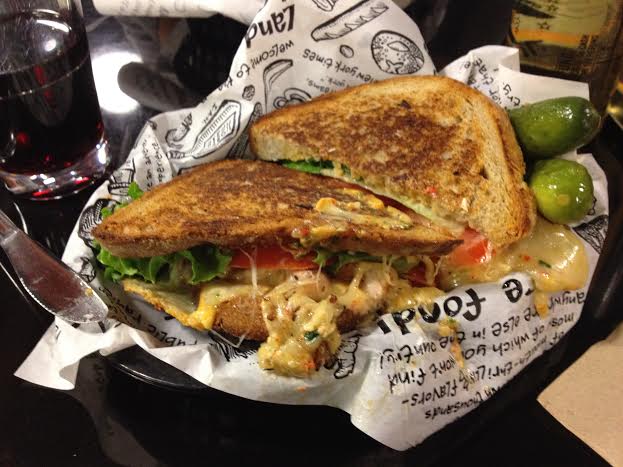 Neither Taylor or I drink, and sometimes we feel a little left out of internet "Beer Snob-ism", so we relish a chance to drink fancy or eclectic sodas (I had a chocolate soda over Thanksgiving. AMAZING). I grabbed a dark cherry pop, while Taylor pointed to a bottle in the fridge. "Matt, this says Dirt Ginger Ale. I gotta try it."

Normally, the word "dirt" in front of a beverage would be strong encouragement to AVOID said drink, but not to my wife. Once we got to our seat, she took a drag, followed by a highly disappointed face.

"I'm not sure what you were expecting? It said dirt."

"No, I misread it. It says DIET Ginger Ale. This is awful."

Luckily, the sandwiches weren't (although they were probably a little expensive). Both compared very favorably to the beloved Katzinger's in Columbus, and soon sent us both to sandwich coma heaven. I can't speak for the rest of Ann Arbor, but dinner? Delicious. 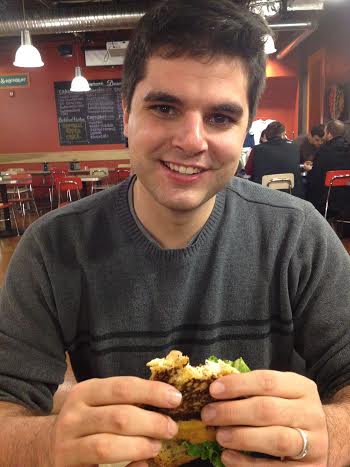 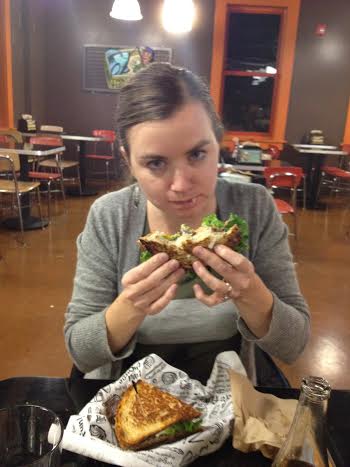 (Me eating my delicious chicken sandwich, while my wife gives me the "THAT BOTTLE TOTALLY SAID DIRT" face)

I have a big day tomorrow, and I hope to get to the stadium bright and early, and will give Ann Arbor a more thorough exploration after the game. I'm hoping that the rest of the weekend will follow the trend of my delicious sandwich, and not my ambiguous feeling of dread.

I didn't crash, after all. Sometimes worries are just worries.