Following a fist fight on a kick return at the beginning of the second quarter, Ohio State true freshman Dontre Wilson and offensive lineman Marcus Hall have been ejected from The Game and will not return.

Ohio State true freshman running back/wide receiver Dontre Wilson and offensive lineman Marcus Hall have been ejected from the Ohio State-Michigan game, following a fight that broke out after a kick return by Ohio State at the beginning of the second quarter. Michigan's Royce Jenkins-Stone was ejected as well, as punches on both sides flew from all directions.

Both coaching staffs had to rush on the field to stop the fighting, which ended up in multiple flags being thrown and the ejections, as mentioned above. Both Dontre Wilson and Marcus Hall headed to the sideline, and then to the locker room, where Marcus Hall said his goodbyes by taking both hands and flipping the bird to the crowd watching him go. This was after Hall was seen throwing his helmet off his head and slamming it on the sideline to the turf. 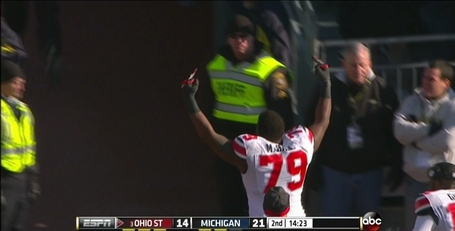 No. 3 Ohio State trails Michigan 21-14 in the second quarter of The Game.