After a season that ended with a national title game appearance, Michigan will need to reload after losing National Player of the Year Trey Burke. Can they do it?

I have a confession to make: I really enjoyed watching this team play last year. I hated them for obvious reasons, but this team played with an infectious energy on offense that was hard to replicate. They led the NCAA in Offensive Rating at 122.5 points per 100 possessions, featured the National Player of the Year in Trey Burke, and they actually played fun basketball because of their spacing. But oh, what a difference a year makes. Without Burke this team is not nearly going to be as fun to watch, and I expect them to slow things down this year.

What can you say about Burke? The guy was simply the best player in college basketball last season, and he stepped up during just about every big moment (except the Final Four game against Syracuse). Need a big game in the Sweet 16? Burke dropped a 23 and 10 line. What about a win against rival Michigan State? 21 and 8. Need someone to play well against the best defense in the country in Louisville on the biggest stage? How about 24 points on 11 shots in 26 minutes after getting in foul trouble at the start of the game. Burke stepped up way too many times to count last season, and he'll be sorely missed while he's braving the Mormon utopia of Utah.

Tim Hardaway Jr. is also gone this season after averaging 14 points-per-game. He may have been a slightly overrated piece of Michigan's attack last season, as he was asked to step out of his comfort zone as a shot creator more than he should have been. Still, he was able to provide rebounds and a few assists per game, so he'll be missed. The Knicks will most likely employ him in a role with fewer responsibilities where he can simply worry about spotting up and defending, which is what he should have been doing last season.

Luckily, these were Michigan's only two major losses last season, and they bring back a large majority of last season's NCAA Runner-up.

Michigan brought in the 12th-rated recruiting class in the country, including three four-star prospects. Expected to make the biggest impact of these three is Derrick Walton, a point guard out of Detroit. Walton is a traditional 6'0" point guard that tries to get everyone involved. He's more Yogi Ferrell than Trey Burke in playing style though, as his jump shot still needs work. It wouldn't be a surprise if he ended up as Michigan's starting point guard.

Their other major recruit is Zak Irvin, a 6'6" wing out of Indiana. Outside of Indiana's Noah Vonleh, Irvin is the best pure scorer to enter the Big Ten this season as a freshman, and should provide plenty of scoring punch off of the bench to start the season before transitioning into the starting lineup next to Nik Stauskas. It's also worth mentioning that their third best recruit this season is Mark Donnal, a face-up 4 out of Anthony Wayne High School near Toledo. I wouldn't expect him to make a massive impact this season due to the presence of Stauskas and Glenn Robinson III, but it's possible that he sees minutes to spell those two.

No coach in the Big Ten better understands the importance of spacing than John Beilein.

I used to actively dislike John Beilein as a head coach before stepping back and looking at things rationally. While I'm not particularly a fan of the 1-3-1 Zone that he employs pretty regularly on the defensive end (although he's been moving more towards man-to-man over the past few seasons), I can't help but marvel at his offensive principles on the college level. There is no coach in the Big Ten that better understands the importance of spacing, both in the players that he recruits and the system that he runs. It looks similar to the Princeton offense at times due to the backdoor cuts (Robinson was the recipient of many of these easy buckets last season), and the triangle at other times.

The results have been undeniable during his tenure at Michigan. Over the past three seasons, Michigan has finished 1st, 20th, and 32nd in the country in offensive rating, meaning they have had an offense in the top 10th percentile every season, even before last season's first place finish.

The team returns starters in Robinson, Stauskas, and Mitch McGary, all three of whom profile to be potential first-round picks upon their declaration for the draft. Robinson is the one I'm highest on, and I expect him to put up a massive season. He wasn't asked to do much ball-handling last season, but he will be asked to carry a bigger load of the shot-creation process this season. As with LaQuinton Ross, Robinson is excellent when taking one or two dribbles in a straight line towards the bucket due to his athleticism and leaping ability; however, this season he'll probably need to be a bit stronger taking midrange jumpers off the dribble as the defense will most likely sell out to stop him from getting to the bucket (if they can). He's also a good defensive player and will be counted on to guard the other team's best forward. My guess is that he ends up averaging something around 16 points and 7 rebounds per game, and may be my front-runner for Big Ten Player of the Year.

Stauskas should continue to flourish as a spot-up shooter, and there is always a place for someone whose mechanics seemingly never falter. McGary should be one of the best big men in the Big Ten this year, but we'll get to him in a minute.

Next to those three forwards in the starting lineup will be whoever wins the point guard battle between Walton and NCAA Finals darling Spike Albrecht. At shooting guard, Caris LeVert out of Pickerington, Ohio seems to have taken over the starting spot for now, but I think he's going to be hard-pressed to keep Irvin out of the lineup as the season continues.

Whoever loses the battle between Albrecht and Walton - my money is on Albrecht - will be the catalyst for the bench unit, along with Irvin to start the season. In the frontcourt, Jon Horford and Max Bielfeldt will join 10th year senior Jordan Morgan. How Morgan still has eligibility is beyond me, considering he is at least 36 years old by now. But he'll act as something of a veteran presence on a largely young squad. 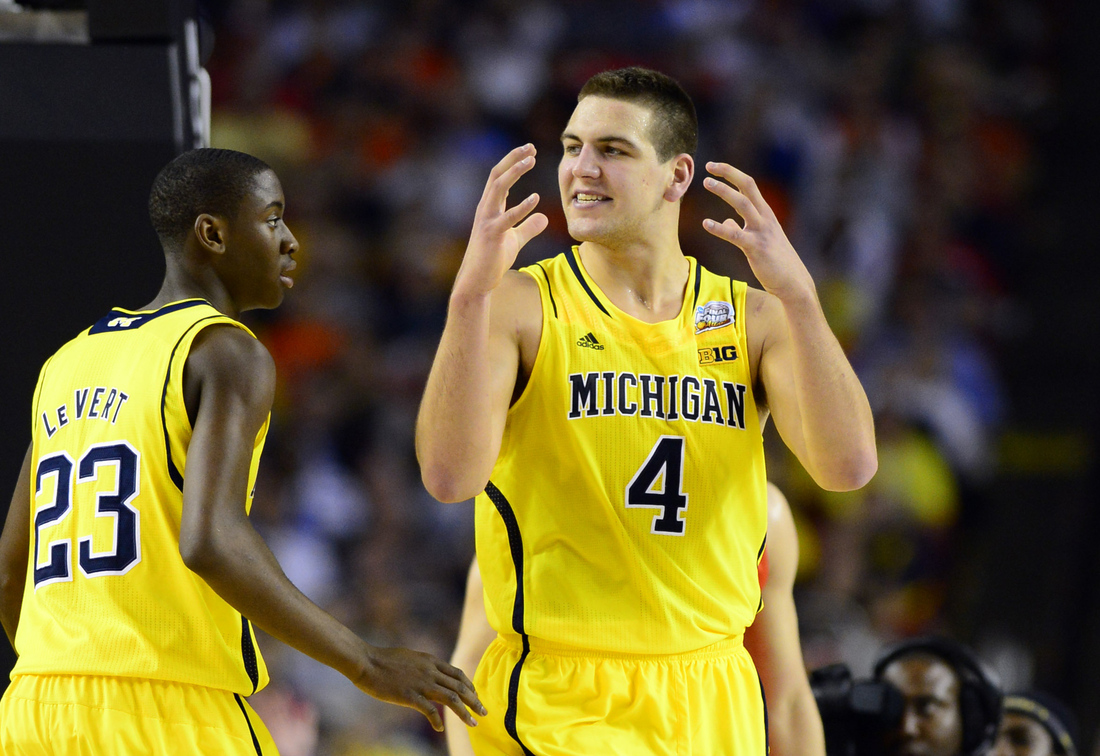 Which McGary does Michigan get this year? If the McGary from the NCAA Tournament is the one that Michigan gets all season, he has potential to win Big Ten Player of the Year. If it's the one who couldn't stay out of foul trouble during the regular season, then he'll probably put up similar numbers to Amir Williams. Given his pedigree as a recruit - and that he's about 32 years old - I'd assume that the Tournament version of McGary is the one to expect.

Michigan rides its three sophomores to the Big Ten title and a number one seed in the NCAA Tournament as Robinson turns into an All-American. They reach the Final Four due to some timely upsets, and once they get to that point anything can happen.

McGary struggles to stay on the floor, their frontcourt gets abused his absence by the forward-heavy Big Ten, and they suffer upsets en route to an 11-7 record in conference. They only end up with a six seed, and are upset by an upstart mid-major.

Unfortunately for Ohio State fans, Michigan is a real contender this season and start on an equal playing field with the Buckeyes. It's going to be a battle all year between the two for both conference and national supremacy. Michigan is a top-10 team in the country this year, and I expect them to end up in the NCAA tournament with around a #3 seed.