Richard Pitino, the 31-year-old son of last season's NCAA Champion coach Rick Pitino, takes over as the youngest coach in the conference. Can he replicate his father's style at Minnesota?

After a third round NCAA Tournament appearance - the furthest the Golden Gophers have gone since 1997's Final Four appearance - Tubby Smith was relieved of his coaching duties. While this seemed shortsighted to me at the time, Minnesota was able to woo Richard Pitino from Florida International. While Pitino is only 31 and has an 18-14 record as a head coach, he will breathe new life into a program desperate to make a splash.

Minnesota lost two of its big four from last season in Trevor Mbakwe and Rodney Williams. Mbakwe's injuries eventually caught up to him in his final season on campus, as his numbers went down across the board. Williams never lived up to the immense hype that he brought about in 2011, but he was ultimately an athletic wing that played solid defense and got to the rim. The Gophers also lose Joe Coleman, a guard that averaged 27 minutes per game as a glue guy. And of course, Smith leaves behind a slower system and a level of success that hadn't replicated in nearly two decades of Minnesota basketball.

Pitino brings with him an up-tempo system and Florida International's best player from last season in guard Malik Smith. He'll most likely be the first guard off the bench after averaging 14 points per game last year. Also, guard DeAndre Mathieu becomes eligible after sitting out a season after transferring in from Morehead State. However, given this team's losses on the interior, there may be no more important transfer than Joey King, a 6'9 power forward coming from Drake. King himself isn't much to write home about as a face-up 4 that averaged seven points in about 20 minutes per game last season. However, he'll most likely join the rotation immediately due to the dearth of frontcourt options. The team features no freshmen of repute that are expected to make an impact. 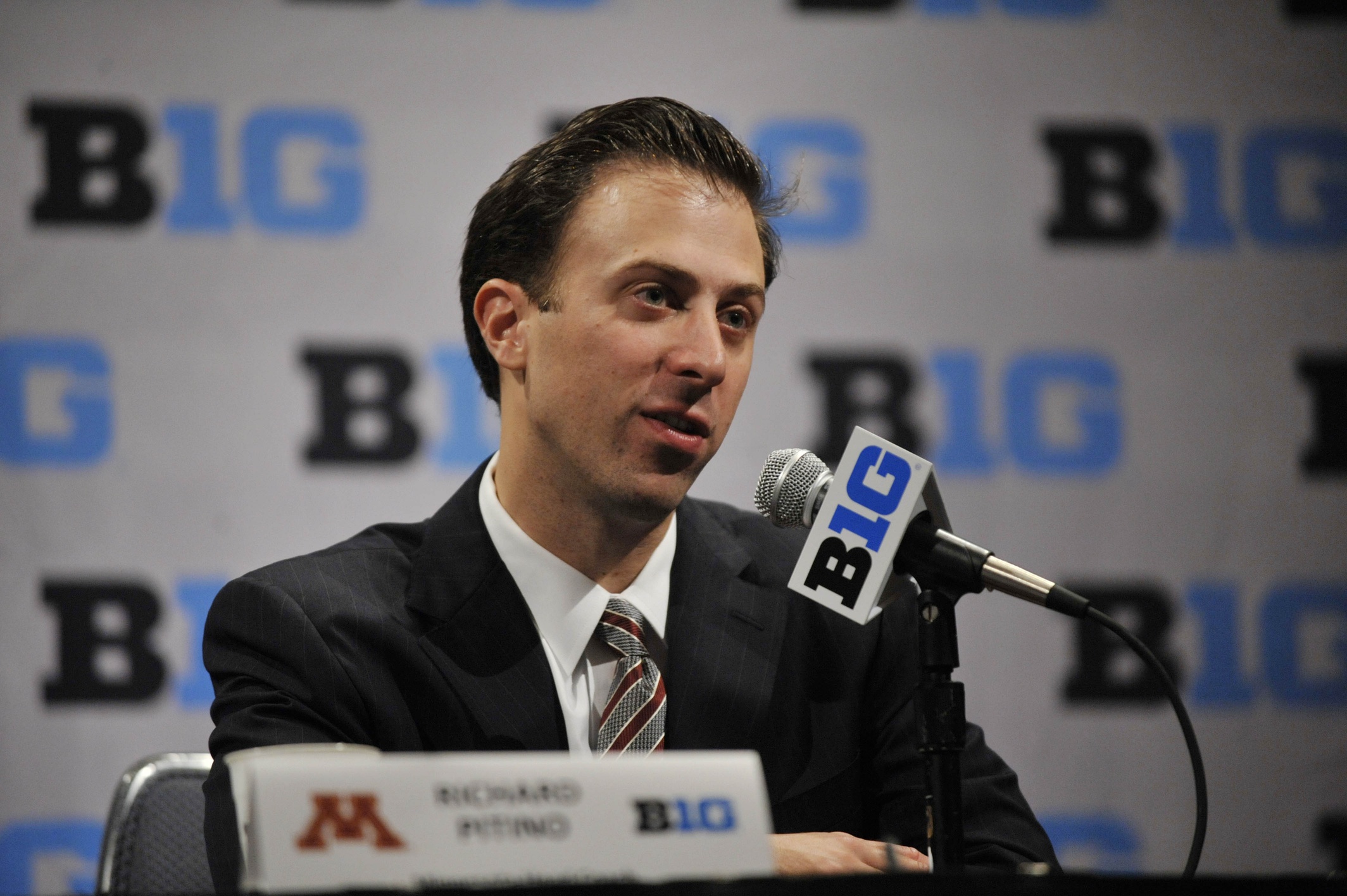 Richard Pitino comes from the same school of thought as his father Rick, where he'll employ a system based upon an up-tempo offense and high-pressure defense. Their goal is going to be to force turnovers and get easy transition buckets. One adjustment that both Minnesota and Ohio State will have to deal with this season is the implementation of the hand check rule that limits the amount of physical contact a defender can use to impede a ball-handler. This means Pitino is going to need to be a bit more vigilant in teaching his defenders to press without fouling.

Andre and Austin Hollins - unrelated -- return to provide scoring punch in the backcourt this season, and they'll be expected to carry much of the offensive load overall. Andre, a junior, is the catalyst of the offense and averaged nearly 15 points, four rebounds, and three assists last season while shooting 42% from behind the three-point line. Austin, a senior, averaged 11 points, three rebounds and three assists next to him in the backcourt.

While the Hollinses have two positions on lockdown, the rest of the starting lineup is unsettled. Mathieu has stepped up in the preseason and is now favored to start in the backcourt in a three-guard set due to his defensive intensity. However, the frontcourt is much less settled. King could step in immediately and start. The two options with the most experience returning for the Gophers are Elliott Eliason, Oto Osenieks and Maurice Walker, but the Gophers shouldn't count on much production from any of them. Expect two of these four guys to start in the frontcourt, and also expect Pitino to potentially go with four guard sets from time-to-time. I'd give the inside track to Eliason and King.

Smith will be the lead guard off the bench in those rare instances where the Hollinses leave the floor. Senior guard Maverick Ahanmisi also returns and will get minutes in the backcourt. There really isn't much to discuss as far as the frontcourt is concerned. Whichever of Walker, Eliason, Osenieks, and King lose the battle for frontcourt minutes should still get minutes off the bench. Ultimately though, this is a roster short on legitimate frontcourt options. Speaking of which...

Who rebounds for this team? The Gophers last season, behind Mbakwe, had the best rebounding margin in the conference at +7.6. Eliason will most likely be counted on to pick up the slack after averaging 3.5 rebounds in 14 minutes per game last season, but he still doesn't have a large enough track record for this to be considered a strength. Given that Pitino plays high intensity defense and wants to get out and run on offense, defensive rebounding is an essential part of his system. If Eliason or any of the other big men can't anchor the paint, Minnesota is going to struggle in Pitino's first season. I expect that this ends up being unresolved as the season progresses.

Andre Hollins takes the next step, becomes a more efficient version of Russ Smith at Louisville, and leads Minnesota to a 9-9 record as their high-intensity defense takes the Big Ten by storm and leads them to a surprise season replete with upsets.

The lack of interior skill comes back to haunt Minnesota, and Pitino's defense becomes less useful because of the hand check rules. The Hollins boys can only do so much, as Minnesota struggles to a Penn State-like 5-13 season where the guards simply can't make up for a lack of interior depth.

The guards play well, and Minnesota knocks off a surprise Big Ten opponent or two. However, with the size of the Big Ten this season they ultimately can't muster more than six wins as teams find ways to slow down their attack.