Purdue 2013-14 Basketball Preview: Can the Boilermakers make a tourney run?

Can Purdue bounce back from a losing season and make the NCAA Tournament? They have an easy schedule, but they aren't replete with a ton of talent coming into the year.

Share All sharing options for: Purdue 2013-14 Basketball Preview: Can the Boilermakers make a tourney run?

Purdue comes off of a losing season in 2012-13, but one that showed promise with an 8-10 Big Ten record and two freshmen playing starring roles. Can the Boilermakers capitalize on an easy Big Ten schedule this season that features Indiana and Michigan State only once at home, along with Illinois and Iowa once on the road?

Purdue welcomes a borderline top-25 recruiting class to West Lafayette this season, headlined by Kendall Stephens. Stephens is a four-star shooter whose father played for Purdue. If he's healthy (he sat out much of his senior season due to a shoulder injury), then I imagine he'll receive immediate time as Painter attempts to replace Byrd's shooting from distance. They also add Bryson Scott and Basil Smotherbone, two athletic, albeit undersized, energy players who are tough defenders.

The Boilermakers did also score two graduate transfers in Errick Peck and Sterling Carter. Peck is an undersized forward coming from Cornell, where he averaged slightly over ten points per game the past two seasons. Carter arrives from Seattle University, where his usage and minutes had declined over the course of the past three seasons. My guess is that Peck sees a bit more time than Carter given the Boilermakers' need in the frontcourt.

If Purdue suffers through another losing season, Painter could be on the hot seat.

Matt Painter is a very large proponent limiting turnovers and playing high-pressure defense; however, last season the Boilermakers struggled to do that. The team finished last in the Big Ten in turnover margin at -1.26 per game, and gave up nearly a 41% field-goal percentage defensively. Painter has a track record of excellent teams, but I fear that he largely lives off of the track record of his 2007 recruiting class. If Purdue suffers through another disappointing season, then it wouldn't be a surprise to see his seat get a little bit hot. 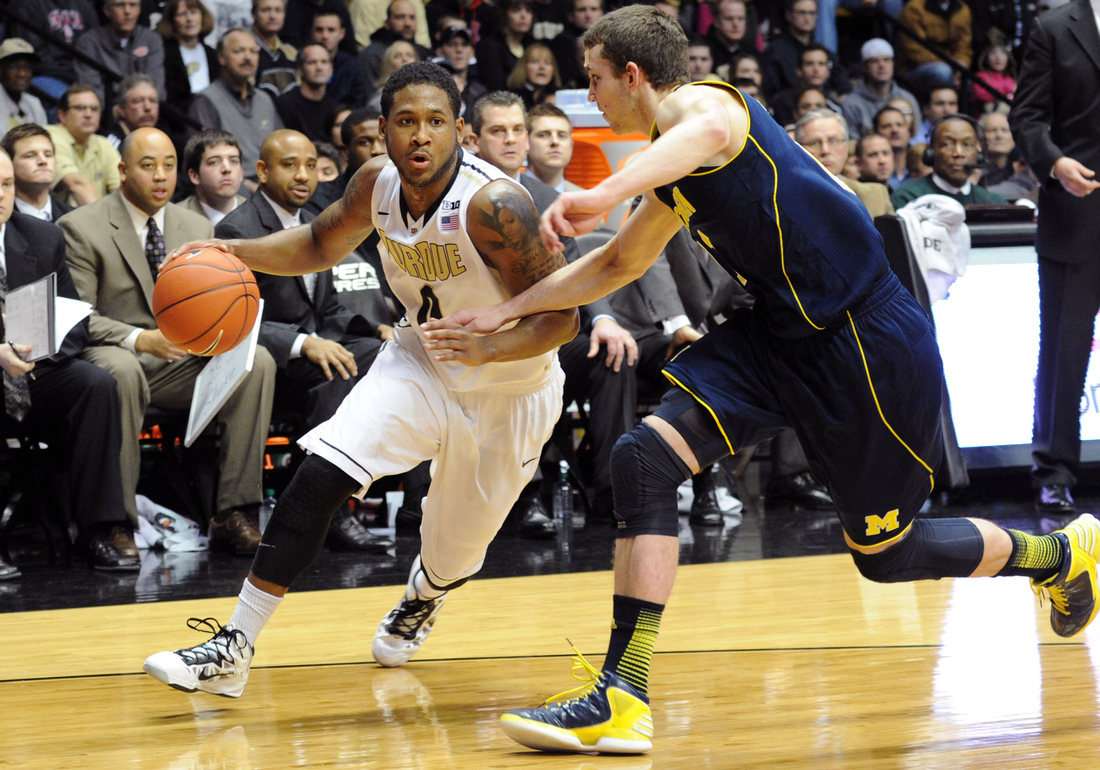 A.J. Hammons returns to anchor the paint both offensively and defensively, after averaging 10.6 points and two blocks per game. Hammons possesses a skillset that most seven footers would dream of, with extremely agile feet and an Andrew Bynum-like frame. However, it's fair to question his maturity and desire to be great after he was suspended for the opening three games of this season following a violation of team rules. Quite obviously, Hammons is the key to Purdue's season. If he shows up with an added tenacity, Purdue could be better than a middling Big Ten team again.

Outside of Hammons, leading scorer Terone Johnson returns for his senior season after a third-team All-Big Ten season where he averaged 13.5 points, 4.7 rebounds, and 2.9 assists last year. Next to him in the backcourt will assuredly be rising sophomore Ronnie Johnson, who played solid, albeit turnover-prone basketball last season as a freshman. My assumption is that Raphael Davis returns to the lineup after starting half of Purdue's games last season, but Simmons could force Painter's hand if his ability to shoot the ball proves invaluable. Travis Carroll and Peck should duke it out for the final starting spot, although once Hammons returns Peck would seem to be a better fit in order to space the floor.

Carter and Carroll will be the veteran leaders this season off the bench who should provide tenacity and toughness. Scott and Smotherbone could force Painter's hand if their defensive intensity is what it's expected to be. Stephens will see time early on as a floor spacer (an extremely important aspect that we'll get to in a minute). Finally, 6'10" center Jay Simpson is a past top-150 recruit who should be able to spell Hammons when he needs a rest.

Which Hammons do the Boilermakers get this season?

Outside of which Hammons the Boilermakers get this season, the next most important question simply becomes how does this offense become efficient? Four of Purdue's top six scorers last season shot 40% or worse, and they lost their best floor spacer in Byrd. Unless Stephens is able to step up in a big way to replace what Byrd got, we're going to see a lot of possessions involving one of the two Johnson's dribbling aimlessly while trying to create offense for themselves. This lack of spacing could also hurt Hammons' upside in the post, as the defense should be able to condense and close down on him quickly once he receives the ball on the block.

Because of their somewhat easy schedule this season, it wouldn't surprise me if Purdue ended up with both a winning record in conference and a 20-win season. Seriously, getting to play Nebraska, Penn State, Minnesota and Northwestern twice this season is an easy way to inflate a record. They'd have to run the table in those games, but it's possible they can they go 10-8 in conference.

The offense continues to be a clogged toilet replete with turnovers and poor shooting as Hammons gets frustrated midway through the season and tunes out. They go 6-12, and Painter's seat gets red hot.

I'm not at all a fan of this squad. Their talent is on par with Minnesota, except it's a bit more balanced due to the inside-out combination of Terone Johnson and Hammons. However, their easy schedule will most likely lead to another 8-win season. I don't see them as a potential NCAA Tournament squad unless Hammons reaches his lottery potential.