Bo Ryan puts his 12 season steak of top-four finishes in the Big Ten on the line this season, as the Badgers feature question marks on the interior.

Share All sharing options for: Wisconsin 2013-2014 Preview: Who plays inside?

Death, taxes, and a top-four finish in the Big Ten. Those are the only certainties in the life of Wisconsin basketball. Bo Ryan has been Wisconsin's coach since 2002, has never finished outside of that spot in the conference, and has made the NCAA Tournament every season. Given what Wisconsin has returning in 2013-14, the NCAA Tournament berth shouldn't be in question; however, the top four may be in jeopardy.

A lot of frontcourt depth will be missing from last season's Badgers. Center Jared Berggren was the Badgers' second leading scorer and rebounder last year at 11 points and 6.9 rebounds per game, and the Big Ten's leading shot blocker with 2.1 per game. His interior defense was always extremely solid, and his all-around game will be missed. The same goes for Ryan Evans, the undersized bruiser who led the Badgers in rebounding and jump shot free throws the past two seasons. I will mention that Mike Brusewitz is also gone, but nothing else because he is a scourge on the face of basketball over the last four NCAA seasons. And honestly, I think he'd really enjoy the fact that I wrote that.

The biggest arrival on campus for Wisconsin this season is that of Nigel Hayes, a 6'7 forward out of Toledo that Ohio State offered. He is a prototypical Ryan combo-forward that offers both toughness inside and touch from outside. He'll be their new Ryan Evans, be there for four years, and be an awesome addition to their team. The Badgers also bring in Bronson Koenig, a four-star point guard that reminds of Ben Brust a little bit, and he'll play immediately behind Brust and Josh Gasser.

Ryan essentially brings in the same prototypes of players every year, and it works. 6'0-6'2 semi-athletic point guards with great vision and automatic three-point jumpers? Check. Physical, undersized post players with range? Check. A big man in the middle to defend the post? Check. It's like clockwork. I don't like Bo Ryan, but god dammit, I respect him for sticking to a system and making it work consistently.

The reason he gets these prototypes of players is so that he can implement them into his swing offense, a type of 4-out set where there is constant moving, cutting, and passing. Athleticism is inconsequential compared to court vision and shooting skill in this system. It essentially begins as a triangle offense, then morphs into a monster of different UCLA cuts, flare screens and ball-reversals. These continual motion sets help the Badgers control the ball, which along with Ryan's tough defensive principles allows the Badgers to play low-scoring contests that he feels his team will always get the best of. 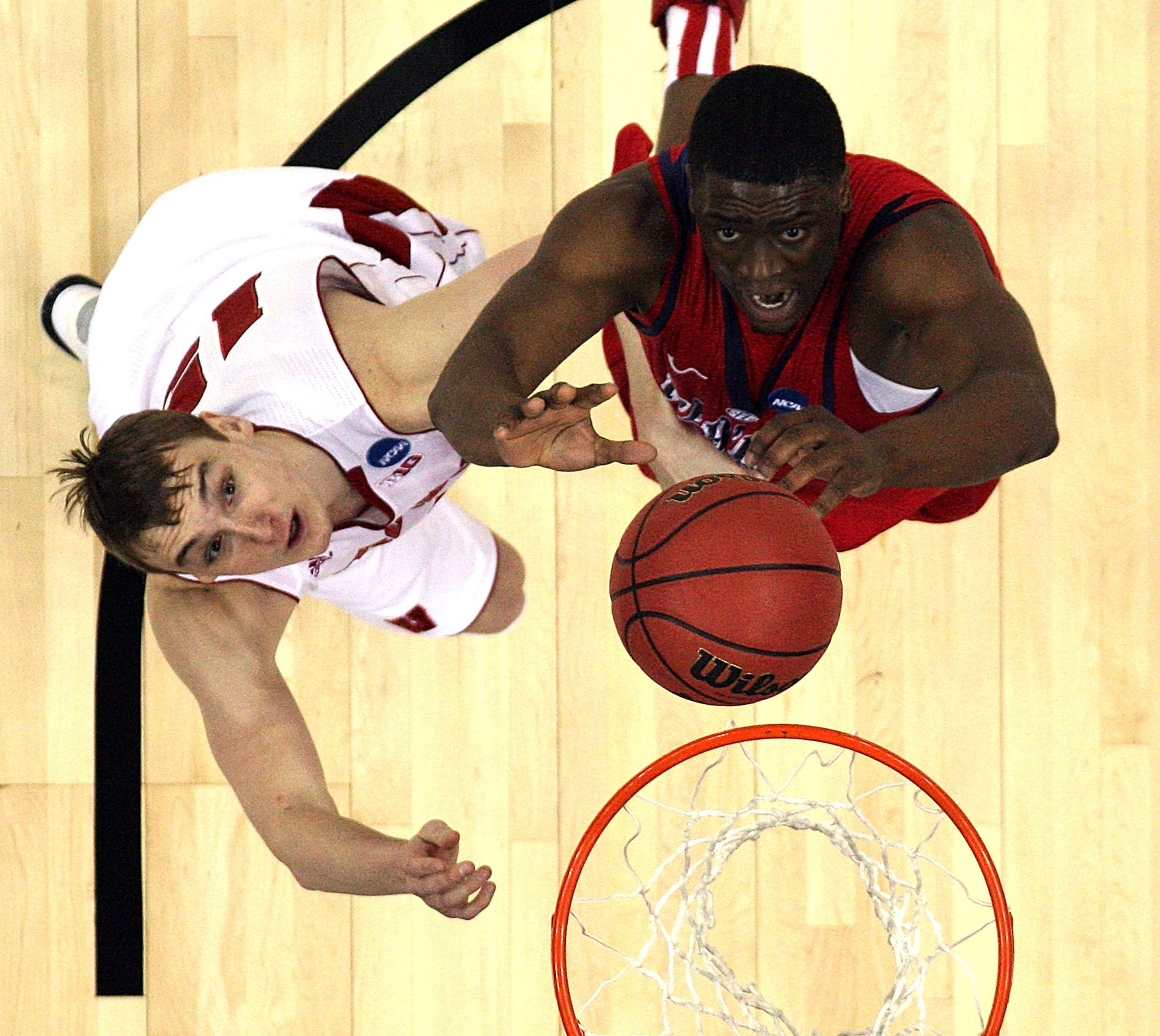 In the backcourt, leading scorer Ben Brust returns with his 39% three-point percentage and penchant for coming up with big rebounds among the trees. Traevon Jackson out of Westerville, OH will start next to him in the backcourt. Meanwhile, Gasser returns from a torn ACL after missing all of last season. Gasser was supposed to start at point guard last season, but will most likely slide over and let Jackson take the reins.

However, none of these three players are nearly as important as the emergence of Sam Dekker, a 6'7 do-it-all combo forward with a silky smooth jumper and solid athleticism. Dekker is essentially a Gordon Hayward clone. He needs to spend a bit of time working on his ball-handling, but ultimately Dekker should take a step forward this season and be in the running for Big Ten Player of the Year. I expect him to put up massive numbers. Next to him, Frank Kaminsky most likely starts.

Hayes and Koenig should play key roles off the bench this season in the manner that Dekker did last season. Others such as Evan Anderson, Duje Dukan and Zach Bohannon will likely see minutes, but this is probably a short bench.

Can Kaminsky adequately replace Berggren in the middle? Kaminsky didn't play much last season. He is a seven-footer that has touch from range and could be a great fit in the swing offense, but tended to foul quite a bit defensively in the limited minutes he received - although that could simply be a function of him having fouls to give. Dukan and Anderson barely received minutes last season, and Hayes isn't quite big enough yet to man the middle. Freshman Vitto Brown is known as a solid defender, but probably isn't even close to ready for Big Ten play. This is their biggest weakness coming into the season. If Kaminsky takes the step forward, then this is absolutely a top-four team in the conference. If he doesn't, that streak could end.

Dekker wins Big Ten Player of the Year and leads the Badgers to a 13-5 record in conference. They end up with a 3-seed in the NCAA Tournament and the Ryan makes his first Elite Eight appearance since 2005.

Their big man-laden out-of-conference schedule, featuring Florida and Marquette, proves to be too much for the interior-lacking Badgers and they start out a bit slow before ultimately picking up their play around mid-season. However, it's just not enough and the Badgers finally finish outside of the top-4 of the conference with an 11-7 record.

We kind of know what we're getting at this point with Wisconsin. It's a good squad that features a potential star in Dekker. I'll say they finish in a tie for 4th place in the conference with Iowa, barely securing it in their final games of the season as they finish with wins over Penn State, Purdue, and Nebraska.