Tom Izzo leads the Spartans into a season with sky-high expectations. Will the Spartans be able to cut down the nets in Arlington, or will Big Ten play beat them up before reaching their goal?

What a difference a year makes for the Spartans. After bowing out unceremoniously to Duke in the Sweet 16 of the NCAA tournament, the Spartans are universally considered a top 5 team after only losing one key player from their roster. This veteran squad has legitimate Final Four and Title dreams, should they escape the Big Ten unscathed.

Derrick Nix is gone, and I can't say that Michigan State should be too disappointed in that. Nix was a consistently immature, overweight center that struggled academically and finally got in shape only in order to potentially get drafted. After that plan failed miserably, he has done nothing to show that he's matured, both in his post-draft Instagramming, and his European career. He's already opted out of one three-year contract in the Slovenian League, and is now forced to work out in Latvia in order to make a living. This should be addition by subtraction, despite the fact that he eventually won coach Izzo over by the end of his tenure.

Gavin Schilling is their most impressive recruit this season, a three-star forward/center that could potentially challenge for a starting spot this season next to Adreian Payne with Nix gone. He's been doing the little things defensively in offseason practices this season that Izzo notices, so I would expect him to get some burn in their short frontcourt. The team also picked up Alvin Ellis, a small forward out of Chicago that most likely will have to wait his turn to get playing time behind the deep wing Michigan State will employ this season.

Can you say a bad word about Tom Izzo? I'll wait while you try to think of something

Can you say a bad word about Tom Izzo? I'll wait while you try to think of something.

You should have given up by now because I don't believe it to be possible. The guy has as great a track record as it gets in the NCAA, and goes about his business the right way. He's an excellent in-game tactician that makes phenomenal adjustments to keep the opposing team off-balance. He stresses defensive excellence in a system that relies on staying with your man and making the proper rotations instead of recklessly forcing steals or turnovers. His teams are always among the best rebounding squads in the nation because he stresses crashing the boards and forcing single shot possessions. More than that though, he demands effort, and will never be afraid to pull even his best player if he feels that man is not exerting the proper amount of energy on the defensive side of the ball.

Izzo is undoubtedly a top-5 coach in the NCAA, and I wouldn't argue with you if you called him the best.

Michigan State returns their four best players from last season in Keith Appling, Branden Dawson, Payne, and Gary Harris. Harris is the real gem here, and he'll contend for Big Ten Player of the Year after a freshman season where he averaged 13 points-per-game on 41% shooting from three. Opponents will obviously be keying on him after last season's breakout, but I'm not sure it's going to matter with his skill level. His efficiency was sky-high last season and I don't expect that to change. 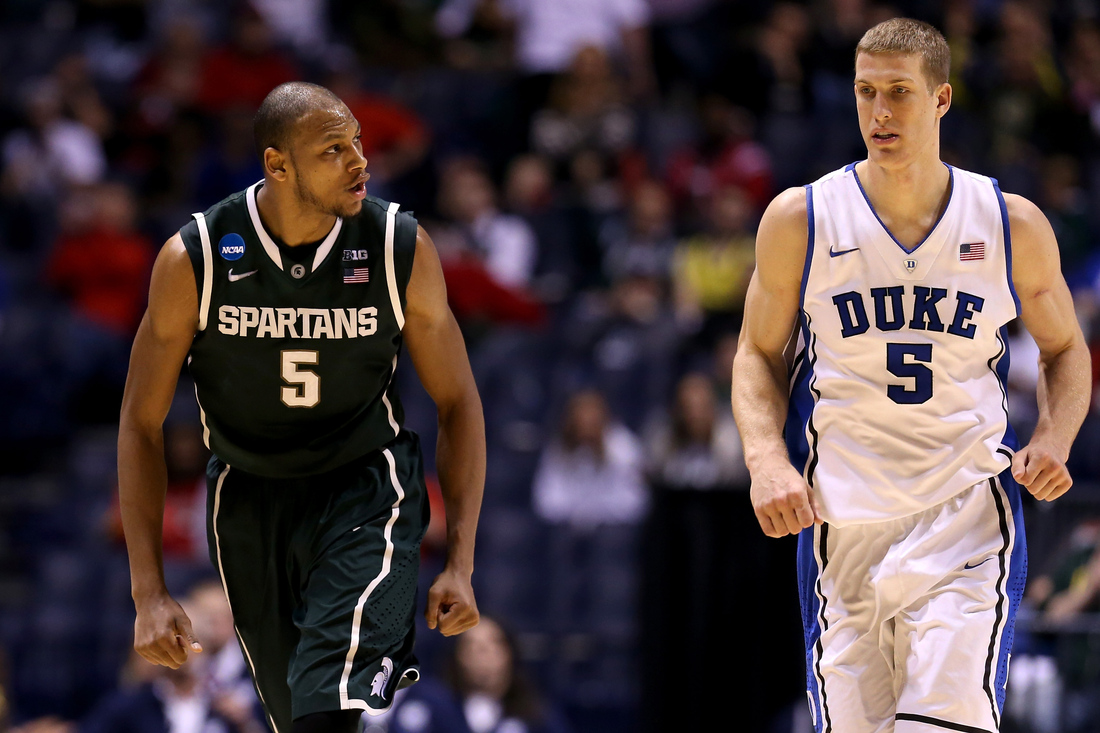 The next most important player on this roster is another potential first-round selection in Payne. I've annihilated Payne before, as I believe him to be a boneheaded player that makes silly mistakes consistently. However, one cannot deny his ability to rebound the basketball (his 17.4% TRR% last season was second in the conference) and play solid interior defense. If his jump shot from last season stays true to form (he shot 38% from three and 85% from the line), he has a chance to be first-team All-Big Ten as the best big in the conference.

Appling and Dawson round out the Spartans' quadrumvirate on the perimeter. Dawson is the athletic defensive stopper, and Appling the point guard. Appling actually led the team in scoring and assists last season, but will hopefully be further relegated to traditional point guard duties with the talent around him. With a long run in the NCAA tournament, Appling could pass Draymond Green as MSU's all-time games leader. Sophomore Matt Costello is expected to round out the starting lineup next to Payne.

Not only does Michigan State have the best starting backcourt in the conference, but they have a strong bench one too. Travis Trice and Denzel Valentine will spell in the backcourt. Russell Byrd is a sharp shooter who should see time on the wing. Alex Gauna and Schilling will most likely back up Costello unless one of them beats him out for the starting job. It's a deep squad that should be able to withstand injuries if they happen.

The Spartans are the one Big Ten team without a glaring question mark.

Umm...well...this is the one team that doesn't have one in the conference. Yeah, who replaces Nix in the middle is a question, but ultimately I expect Payne to pick up the slack, and the center by committee to work out. Essentially, all they need out of that spot is solid interior defense and 5-10 fouls due to the talent around it. There is a reason this team received votes as the best team in the country when the polls came out. It's as safe a bet as there is to be a top-10 team this season.

They cut down the nets in Arlington (that's such a weird phrase to say). This team has the talent.

Seven losses? Six of which occur in-conference, maybe? This is a top-four team in the Big Ten unless both Harris and Payne go out due to injury.

The Spartans are the real deal this season. They're probably going to win the regular season conference title. If you made me put a number on it, I'll say a 14-4 record in conference only because they have to travel to each of the other top-seven Big Ten preseason teams' home court.