With Veteran’s Day on Monday, many teams will be honoring those who have defended our country by adding red, white, and blue to their uniforms. Land-Grant Holy Land tells you who, and keeps you up to date with the latest uniform news around the country.

The Terrapins will break out the black version of their state pride uniforms on Saturday. The university also asked fans to wear black, which makes sense for a day game… 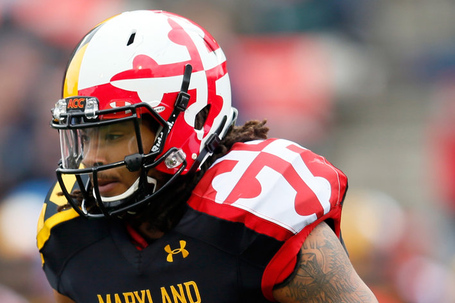 The Wolfpack wore a white helmet featuring the "Strutting Wolf", instead of the standard lettered logo, against rival North Carolina. 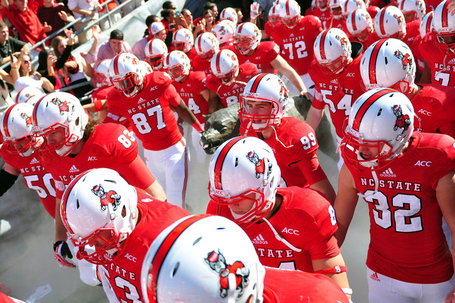 The Orange will honor Wilmeth Sidat-Singh, an African-American who was banned from playing in a game at Maryland in 1937, with a "19" decal on their helmets. After graduating from Syracuse, Sidat-Singh became one of the first members of the Tuskegee Airmen, but died shortly after when his plane went down in a training exercise. Sidat-Singh will be honored during an on-field tribute when Syracuse travels to Maryland today.

For the first time in school history, the Illini wore blue helmets and blue pants on the road. The look was well received by fans because of the similar road look of the Chicago Bears. 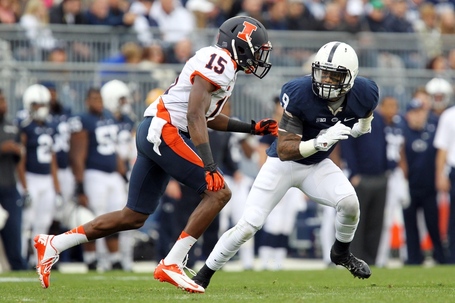 The Hoosiers claimed to be going "old-school" by wearing their new white helmets for homecoming. While unique, the lids are a disaster when they’re not worn on a Riddell Revolution Speed helmet. 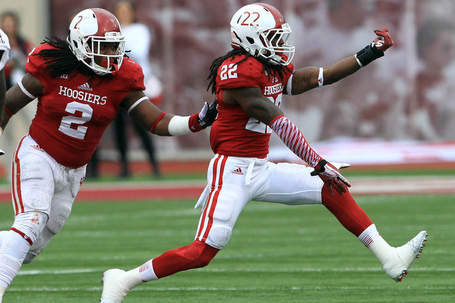 This week against Illinois, the Hoosiers are wearing their chrome, candy-striped helmets.

Chrome domes today against the Illini with the American Flag for @HoosierFootball's Salute to Service. pic.twitter.com/zKffSzYtUR

One of many teams to do so, the Hawkeyes will be wearing a red, white, and blue decal on their helmets.

The Hawks are rocking the American flag Tigerhawk logo today in appreciation of those who serve(d) our great country pic.twitter.com/7VB1K62UDr

Leading up to their matchup with in-state rival Michigan, the Spartans were rumored to have something special up their sleeves uniform-wise. While it wasn’t as flashy as the Pro Combat uniform or chrome helmet the team has worn in the past, Sparty wore green pants, something that hasn’t been seen with the current uniform set. 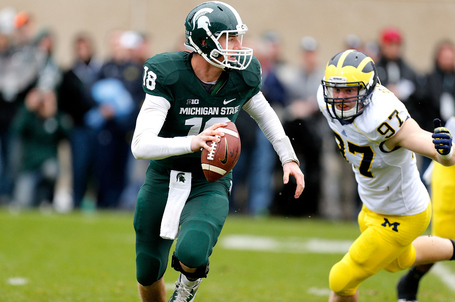 Like their Floyd of Rosedale rivals, the Golden Gophers will be wearing a red, white, and blue decal on their helmets.

We will be wearing these M's this weekend in support of past and present military personnel. #SupportOurTroops pic.twitter.com/BV3z8liSOH

The Wildcats unveiled a special uniform during their bye week, causing quite a stir among the media. The school teamed up with the Wounded Warrior project, something Under Armour clients do yearly, creating a red, white, and blue uniform for their upcoming tilt with Michigan. However, the flag motif seems to have blood spatter on the "stripes" of the uniform. Taking a closer look at the "stars", you’ll see it has the distressed look that UA intended. The university has since apologized for the "misinterpretation".

For the first time since 1990, the Boilermakers wore a black helmet for their matchup with undefeated Ohio State. However, if you’re going to wear a special helmet to mark the occasion, you should probably put up a better fight. 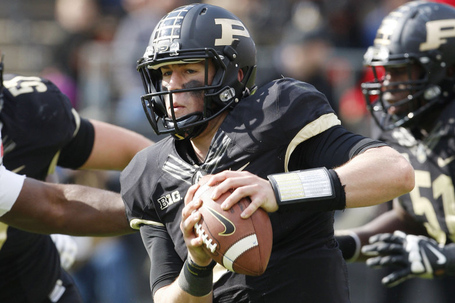 In the Bears’ win over Oklahoma, quite possibly the biggest game in school history, the team wore all-black uniforms. The most underrated aspect of the Bears’ look is the giant paw prints on the shoulder, which saved them from looking exactly like the aforementioned Boilermakers. 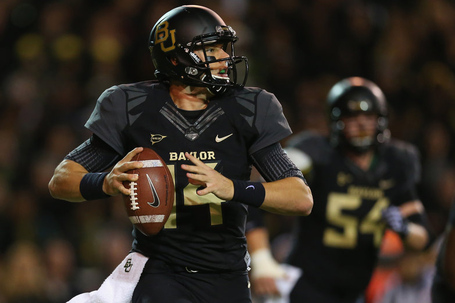 The Wildcats wore a special version of the "Powercat" decal on their helmets against Iowa State, marking the first modification to the helmet since head coach Bill Synder created the current design in 1989. The camouflage decal, known as "Battlecat", was a tribute to nearby soldiers from Fort Riley. 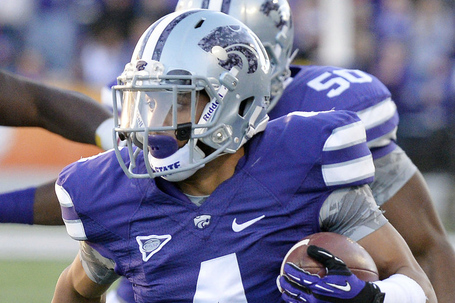 When the Red Raiders take on Kansas State, the team will wear special uniforms to bring awareness to the Lone Survivor Foundation. Founded by a retired Navy Seal, Marcus Luttrell, the Lone Survivor Foundation honors those who died during Operation Red Wings, an intelligence mission in Afghanistan. After the game, the uniforms will be auctioned off, with the proceeds being donated to the foundation. 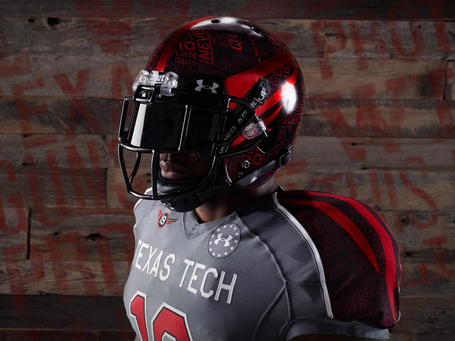 Amid allegations of illegal drug use by members of the Owls’ coaching staff, the team removed players’ names from their uniforms and replaced them with the school’s initials. 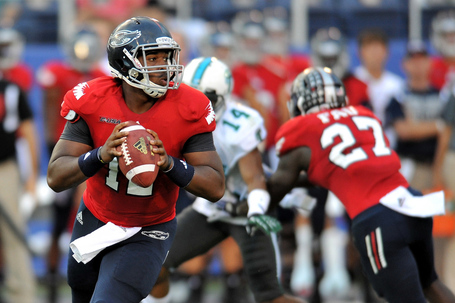 After a couple weeks without Rowdy, the school’s mascot returns to the Roadrunners’ helmet. Rowdy will have a stars and stripes motif when the team welcomes Tulane to the Alamodome.

When former head coach June Jones took over the football program, he requested that the team be strictly known as the Warriors. However, Hawai’i Athletic Director Ben Jay (formerly Ohio State’s Associate Athletic Director for Finance and Operations) recently reversed the decision. Fans longing to see a return to the rainbow colored motif will have their chance when the Rainbow Warriors wear throwback uniforms for Retro Night against San Diego State.

When undefeated Fresno State comes to Laramie, the Cowboys will be wearing all-white uniforms. Here’s to hoping it snows tonight, as it did earlier in the week in the Rocky Mountains.

Although the Eagles have not yet joined the Sun Belt (will be a transitional member in 2014; full time member in 2015), the uniforms the team will wear this weekend are worth noting. Harkening back to the days when the school was called Georgia Teacher’s College, the winged design represent the leather helmets used in the early 1900’s. 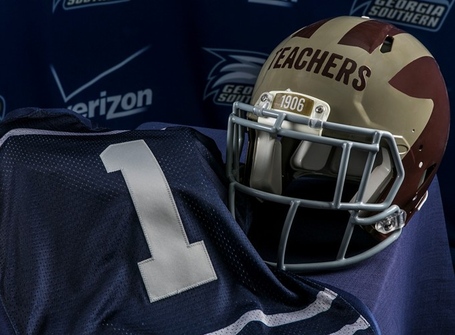 The Wildcats need a win against UCLA to, likely, set up a winner-take-all matchup with rival Arizona State for the PAC 12 South title. Against the Bruins, the Wildcats will be outfitted in blue helmets, red jerseys, and blue pants.

In what looks to be the game that took them out of the national championship race, the Ducks wore yellow helmets and pants with their standard road jersey. The uniforms, paired with Stanford’s red uniform, made for quite the aesthetically pleasing visual. 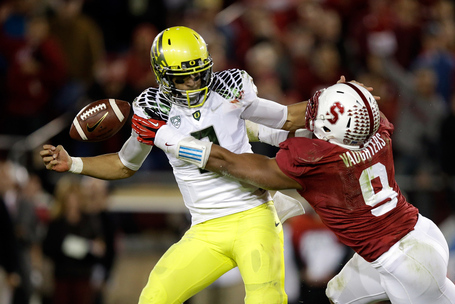 When the Utes look to knock off another Top 25 team, the team will be wearing a "Salute to America" by donning a red, white, and blue decal on their red helmets.

As the Huskies look to become bowl eligible, the team will also be wearing a red, white, and blue decal on their white helmets.

UW Huskies will be wearing the S&S helmet decals vs. Colorado tomorrow. pic.twitter.com/Yq0EEUkomR