The blues are still blue

Ohio State-Michigan is as good as ever; 2013 was no exception

Hated "Ohio" from the free tattoo diploma mill down south penetrated the barriers, weathered a resistance for the ages and lived to tell about it with an unshakeable 42-41 win.

The drive across Michigan isn't exactly unlike the drive across any other Midwest or flyover state. You see more roads labeled with "# Mile" than probably anywhere else (I blame Eminem, personally), but the general motif comes from the same place.

Ann Arbor is a different beast, however, as the college town emanates from Michigan Stadium and the school's adjacent primary campus and almost feels like the university sprawled outward from The Big House to form the town around it. Never less has a college town felt more like a direct byproduct of the academic institution therein, as opposed to one plopped in the middle of an already budding metro area.

"These are Michigan buses. These are our public resources. You should be thankful we're letting you use them." 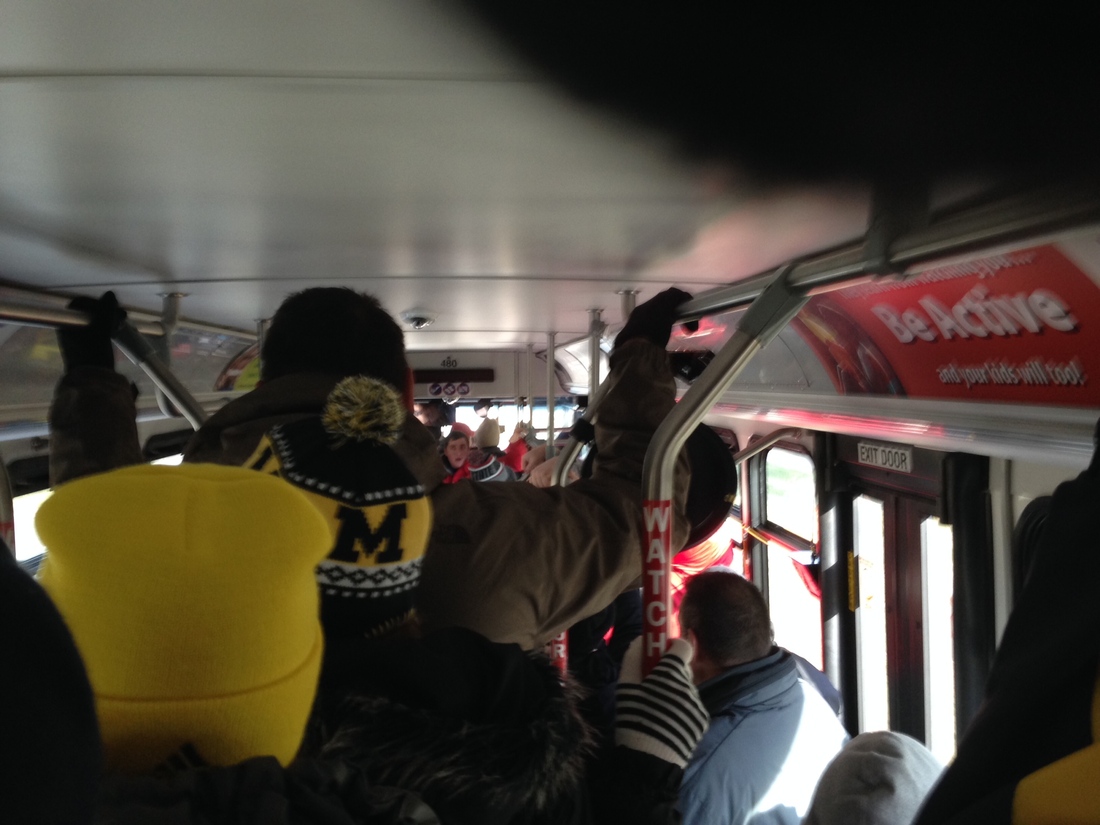 The university's fingerprints extend beyond surrounding neighborhood dynamics and permeate the culture of the fans themselves. On a nightmare, packed to the brim shuttle ride across the campus "suburbs", a Michigan fan announces to no one in particular, "These are Michigan buses. These are our public resources. You should be thankful we're letting you use them." Like clockwork, it comes out minutes later that said fan is a Wisconsin native and never attended the school. Every fan base has its fair share of sidewalk alumni (Ohio State has arguably the largest such base in the country); only at Michigan do they receive honorary doctorates in the nuance of being a 'Michigan Man' (this is a unisex honor; it's 2013).

Michigan's tailgating scene immediately surrounding the stadium and the neighboring Crisler Center, home of the defending national runner-up Wolverine basketball team, is nothing if not emblematic of those around the country. Portable barbecues being used as hand warmers, actual barbecues used to grill, and a giant novelty bus that honks "Hail to the Victors" leave little doubt that despite entering Saturday afternoon as 16-point underdogs, there's no lack of confidence amongst the most diehard, even as the Internet-going Wolverine understandably pre-second-guesses the pending outcome.

Though many openly speculated that the stadium makeup could resemble as much as 50-50 Ohio State-Michigan due to the large blocks of tickets available on online resellers, in perhaps the greatest testament to the Michigan way, the actual stadium split was nowhere near as disproportionate. There may have been a few extra scattered red shirts throughout those shivering on a day when a "high of 39" was greeted as welcome news, but the home team was well represented, and until the point in the contest when Brady Hoke conceded taking his last remaining timeout would be an exercise in futility, they too rightly believed it was their game to lose. 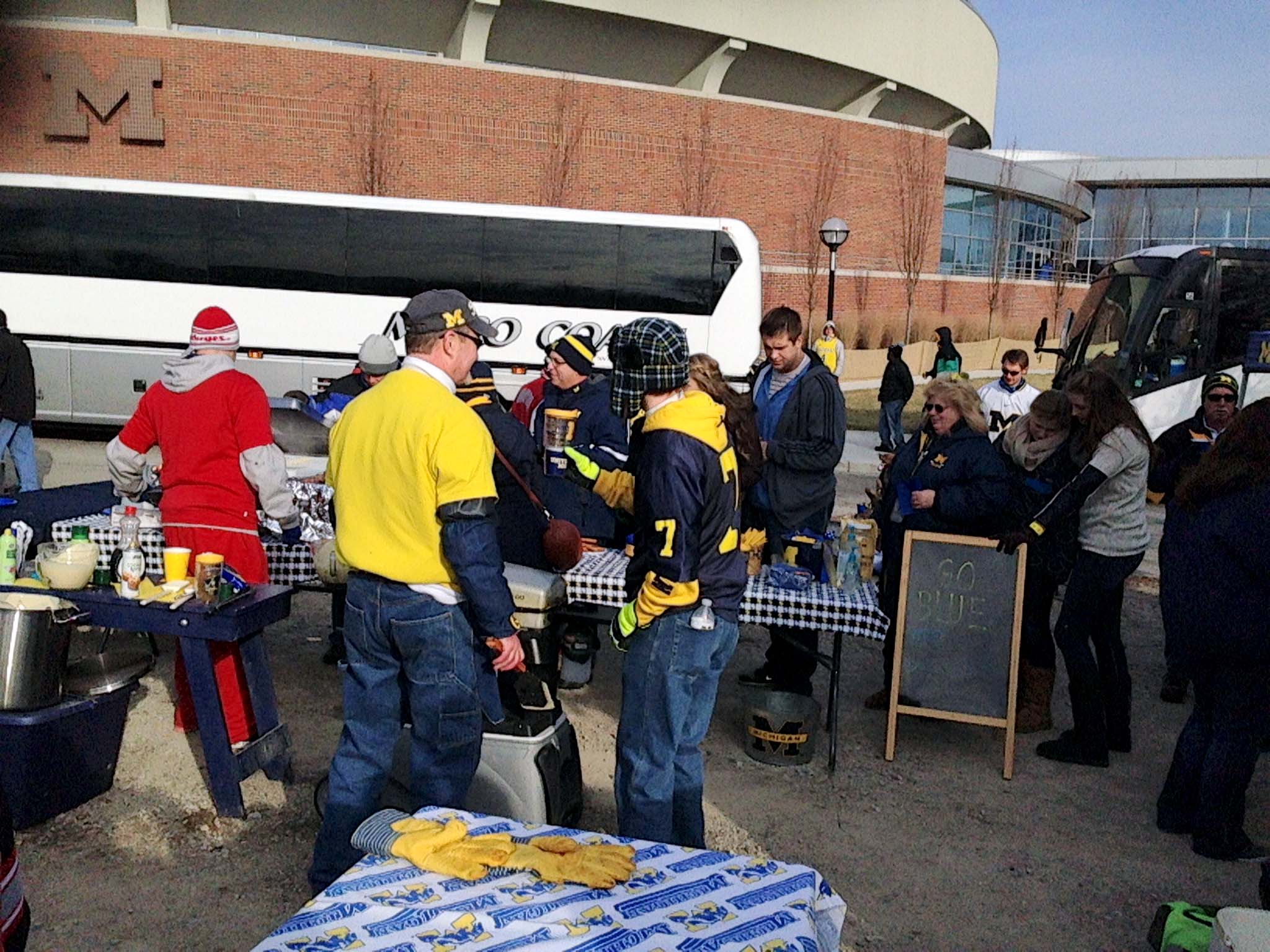 Even with the conditions not being particularly comfortable in which to watch a 3.5-hour and change football game, for the Midwest and on the precipice of December, things could've been much, much worse. A couple from Florida in maize and blue admitted to being "miserable" but the majority of locals, pilgrims, and ex-pats seemed in their element. More so than the cold was the whisking wind. Though the temperature was above freezing for the majority of the day, you could've fooled the uninitiated. Even on a few overthrown Devin Smith targets, you could feel the conditions almost reacting to the play in kind.

The modern Big House is in many ways the Michigan Man's temple; a sort of monument to excess, but an excess of reason. The way you have to angle your knees when sitting during reviews echoes that of Fenway Park, built over a decade prior, and the added onion layers to accommodate more not-so-warm bodies – a fact the PA announcer and fans in your section alike won't let you soon forget – lose a lot of the acoustical advantages you see in similarly closed end zone-to-end zone stadiums. Legend has it Fielding Yost himself dreamed of a day when 150,000 would try to drown out in vain attempts at starting an O-H-I-O stadium chant with those of "GO" & "BLUE", and while it's hard to envision how they'd find a place for any more than the 113,000+ in attendance Saturday, you'd be ever unwise to second-guess Michigan's collective ambition. 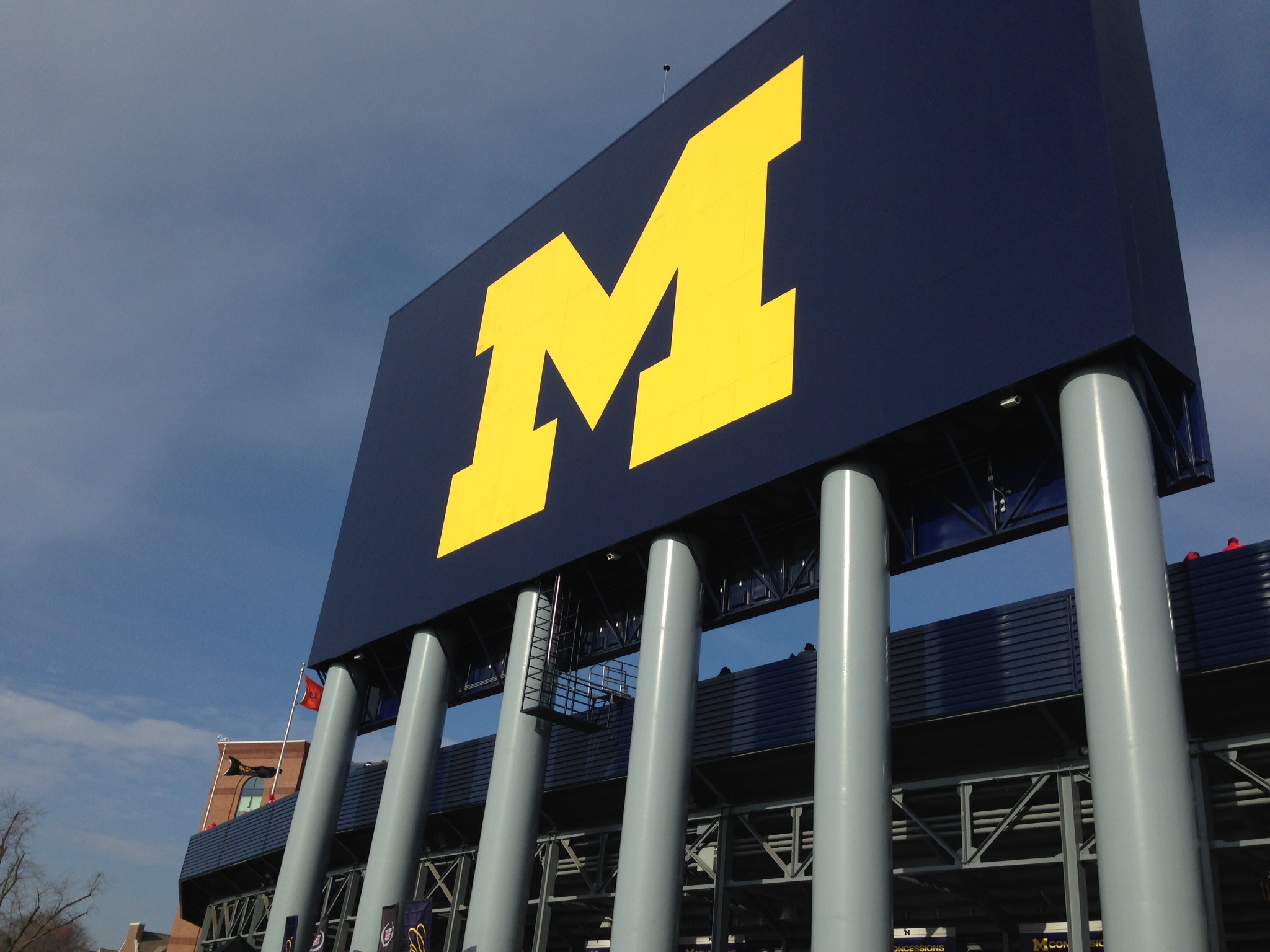 One might have expected the opening minutes of the second-quarter near melee to have escalated tensions around the stadium, yet Midwest hospitality was largely still the currency du jour. A senior Michigan Man wished intoxicated, young Buckeyes an earnest best second half. Ohio State fans politely helped a confused Michigan coed find the right lines for the restrooms. And though some portions of the Wolverines faithful crassly cheered when Buckeyes tailback Carlos Hyde was down with an injury, others echoed back "not like this."

So how does a three-score underdog battle their arch rivals to within a psychic-read interception from ending their later that day realized national title aspirations?

Despite the way the end product of the Ohio State defense looked, overconfidence didn't, on the surface, appear to factor in. Devin Gardner's 32-for-45, 451-yard, four-touchdown passing performance wasn't exactly smoke and mirrors, per se, but a combination of self-scouting married with adjustments and, on the season, unparalleled execution. The 152 rushing yards Ohio State surrendered was a season worst, against an offensive line that struggled to do much of anything in the same department during the weeks prior. Call it extra motivation, call it putting your entire emotional income into a single contest, but the Wolverines executed; they punched up, and the jabs landed. The Buckeyes were in many ways fortunate this one couldn't go to the judges.

Reviewing the outcome in earnest is a difficult proposition. B12 hate booster aside, Michigan wasn't a very good football team coming into this weekend. Did Ohio State merely pick the most inopportune time to play one of their two or three worst defensive games of the season, or is it more indicative of something more problematic? The soft zones and missed tackles are correctable, perhaps even the execution against the teams they face as opposed to the ones they scout.

What the Buckeyes don't need to fret is an offense that is amongst the best ever to wear the scarlet and gray. Carlos Hyde had a quiet 226 yards rushing. Just think about that for a second. Braxton Miller's 6/15 passing performance left much to be desired, but the 153 on the ground (including critical momentum generating runs when his team needed them the most) are the kind of things you tell your descendants about. 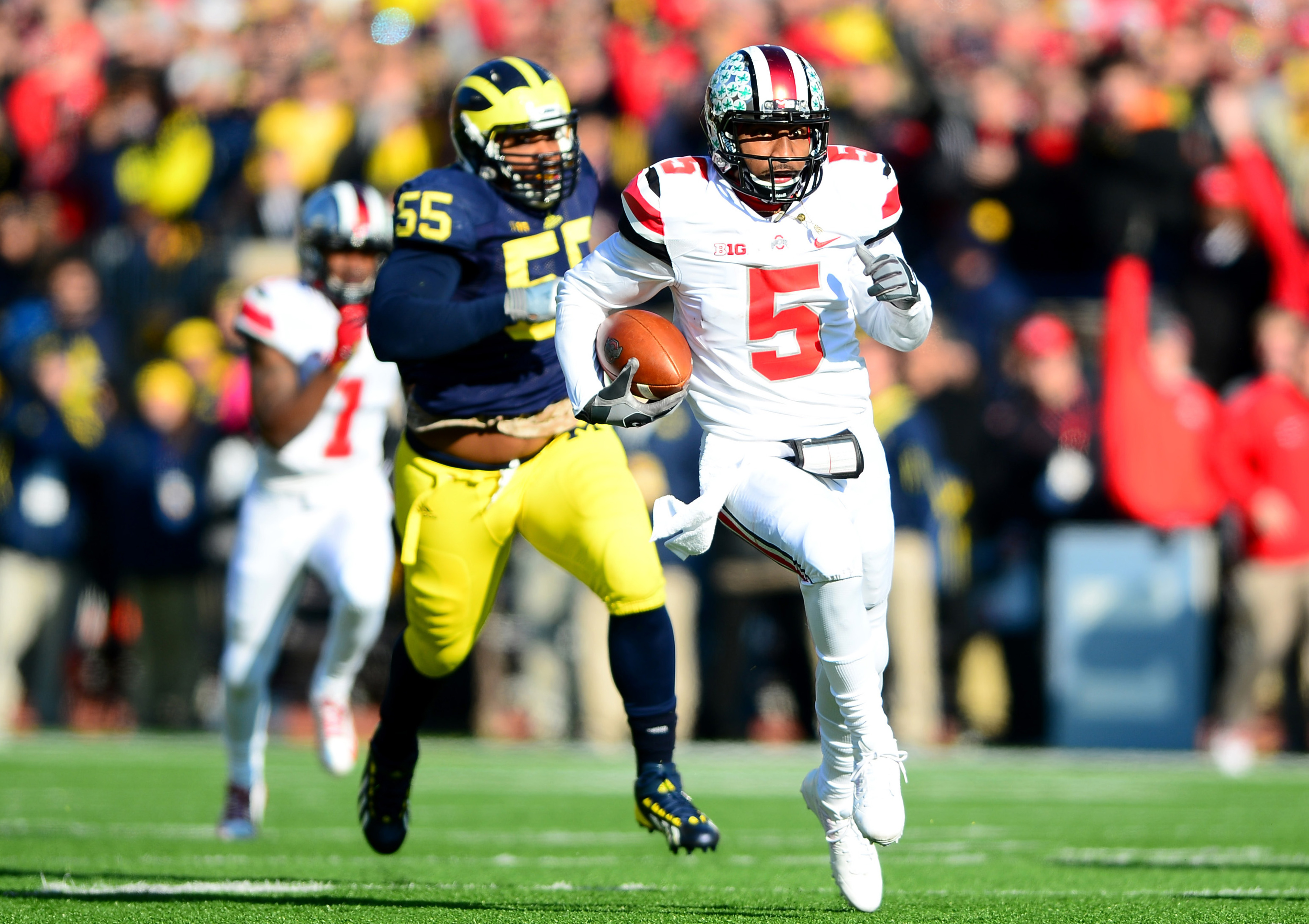 For all the blog comment/sports talk radio lack of unrealistic expectation fulfillment this one generated, from a 30,000-foot level, it's the kind of game Ohio State has to win to make a chase like the one they speak to often possible. And like every game in succession, in the grand scheme, it's only worth what you learn from it. Whether the Buckeyes come apart at the seams in a week or a month, or the season ends in some fashion on par with your wildest dreams, Ohio State-Michigan, the Big House, and everything about college football's most storied rivalry still rings true. And meeting #110 was no exception.