We're less than two months away from National Signing Day 2014 and Ohio State's recruiting class currently has 17 commitments. While there are likely only six or seven spots left in the class, there are still a lot of questions that have yet to be answered.

The spotlight might be on the class of 2014 right now, but the class of 2015 is starting to get into full swing as the Buckeyes just picked up their second commitment for the class when Cocoa (FL) corner Jamel Dean gave his verbal pledge to Urban Meyer and his staff.

Join Adam Buckler, Austin Kemp, Charles Doss, Ian Cuevas, and myself as we discuss a couple of major things in the 2014 class, in addition to some big questions in the 2015 recruiting class, which figures to be a big one as scholarship sanctions are set to expire after this (the forthcoming 2014) class.

Ohio State's recruiting class currently has 17 commitments. What are the strengths and weaknesses of the class to this point?

Adam: I really think this class is full of playmakers. Guys like Curtis Samuel, Paris Campbell, and Noah Brown have the ability to go for six on any given play. Also, the 2014 class addresses the need for offensive linemen with several 4 star recruits. Although the Buckeyes have great potential with players such as Dante Booker and Kyler Berger, I believe they still need to bring in another talented linebacker to help solidify our linebacking core.

Austin: This class is definitely full of playmakers on the offensive and defensive side of the ball. Parris Campbell, Curtis Samuel, and Terry McLaurin all have the ability to stretch defenses and make plays. Defensively, Sam Hubbard, Dante Booker, and Damon Webb can stack up with anyone in the country. The quarterback position in this year's class isn't a weakness by any means, but I'm sure Urban Meyer and company would have liked to add another one.

Charles: I really like this class as a whole. I don't believe there are any weaknesses. I really like how the staff didn't just go out and find great football players but also great people to add to the program. The staff needed to focus on adding offensive line and linebacker depth and I believe they have done that and aren't done working to add even more depth before signing day rolls around.

Ian: The strengths in this recruiting class, in my eyes, has to be the athletes who can play multiple positions. Looking through all of the commitments, you find four athletes that all have great talent at a variety of spots, making them extremely valuable and versatile for coach Meyer's team. The only weakness I see for this class would be linebacker. While securing Dante Booker was great, and a solid signing in Kyle Berger, the linebacker spot needs some help. With Shazier most likely heading to the NFL (always a chance he stays) the linebacking core he's leaving behind isn't up to par from other units the Buckeyes have had. That could all change with a commitment from McMillan, however.

Miles: The strength of this recruiting class is definitely the play-makers that Urban and his staff have been able to pull in. Curtis Samuel, Parris Campbell, Terry McLaurin, and company all have big play ability and could all be big elements in the offense during their careers at OSU. Another strength is offensive line. There are four very good offensive linemen in this class so far in the likes of Jamarco Jones, Marcelys Jones, Demetrius Knox, and Kyle Trout. I think there will be a fifth offensive linemen in this class too. 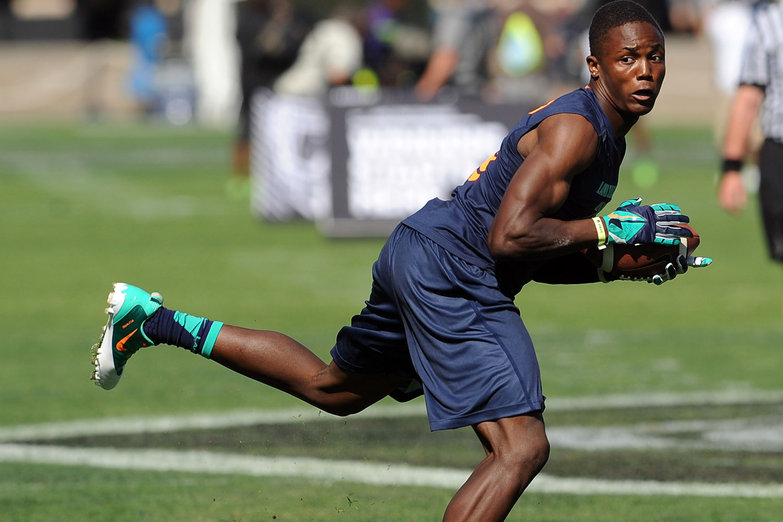 There aren't too many glaring weaknesses, but I definitely think it's important that the Buckeyes add another linebacker to this class with the top target obviously being Raekwon McMillan. Dante Booker and Kyle Berger have the ability to be very good players, but with the Buckeye's current depth at linebacker, you can't have enough of them.

Let's talk Raekwon McMillan. How do you see this race playing out?

Adam: Lately teams such as Auburn and Alabama have made a push to land McMillian, but I'm still sticking with Urban Meyer coming away with the 5-star linebacker after an in-home visit the day before McMillan makes his final announcement.

Austin: The Rakewon McMillan recruiting process has felt like a roller coaster throughout the process, but in the end I think he's a Buckeye. Ohio State jumped out early and I believe they close.

Charles: Even with the recent push from Clemson,Alabama and others, I still believe McMillan will be a Buckeye. Urban Meyer will be in Georgia to meet with Raekwon before he decides on which school he is attending and in my opinion, that in-home visit could be the most important one of Meyer's time in Columbus so far. McMillan is a can't miss prospect, who has the potential to play key minutes as soon as he touches campus no matter where he ends up.

While Alabama, Clemson, and even Auburn have made a strong push to land the standout linebacker, I'm very confident the Buckeyes will be the choice

Ian: With coach Meyer landing an in-home visit before McMillan's decision, I think that can only help Ohio State's cause. Not to mention, Fickell or another staff member will most likely be making a visit to McMillan's school during the week, or at least be in contact with him. With his decision on Monday, I'm still confident that Ohio State will be the school he chooses.

Miles: This has definitely been a fun race to follow, but it's winding down as McMillan is going to announce his decision Monday at noon. While Alabama, Clemson, and even Auburn have made a strong push to land the standout linebacker, I'm very confident the Buckeyes will be the choice. I've felt McMillan would be a Buckeye ever since I talked to him in March 2012 when he was on the way home from his first trip to Columbus and I think he'll be giving Buckeye Nation some good news Monday.

How Many players do you see in this class? Who are your picks to complete the class? Do you see anyone dropping from the class?

Adam: I see this class topping out around 21-22 recruits. I think the Buckeyes will land Raekwon McMillan and both 5-star ATH Marshon Lattimore and 4-star S Erick Smith from the OSU pipeline Cleveland Glenville. Ohio State is still on the hunt for guys like WR Johnnie Dixon, DE Solomon Thomas, and S Mike Rogers.

Which schools are getting getting the most bang for their buck, who is stealing money, and another reason why Purdue is terrible.

Austin: Marshon Lattimore, Erick Smith, and Raekwon McMillan are no-doubters in my mind. From there it can get a bit tricky. The Mike Rogers news seems to be at an all-time low currently, but I don't want to count him out yet. Alex Bookser should get the red carpet treatment this weekend and there's reason to be optimistic about Solomon Thomas. Ohio State will grab one of Johnnie Dixon or Trevion Thompson.

Charles: I still see the 2014 class ending with 24 or 25 prospects when its all said and done. If I would have to place a bet on who would finish out the class, I would currently put my money on Raekwon McMillan, Marshon Lattimore and Erick Smith committing to OSU. I also see this class finishing out with another wide out, defensive and offensive lineman and possibly another defensive back. A few names that could finish out the class are defensive end Solomon Thomas, offensive tackles Alex Bookser, Brady Taylor and current UCF commit, safety Mike Rogers.

Miles: I see this class ending with 24 commitments. While nothing is set in stone until National Signing Day, I think Glenville's Marshon Lattimore and Erick Smith are essentially locks to be in this class. Then I'm pretty confident Raekwon McMillan will be in this class too. After that, things aren't as clear. I've heard the Buckeyes are in a good position for Johnnie Dixon and I continue to think they'll be the pick as soon as Sunday. For the last three, I'll go with Solomon Thomas, Brady Taylor, and UCF commit Mike Rogers.

I think we can all agree Raekwon McMillan is the most important target left on Ohio State's board. Who comes after that?

Adam: I'd have to say the Cleveland Glenville duo. I always feel that it is important to land the in-state guys. I expect Lattimore to play cornerback at the next level, so both of these guys can come right in and help add depth to our defense which loses three starting defensive backs.

Austin: After McMillan, Marshon Lattimore is essential to this class. His elite athleticism will do wonders and make him a special defensive back at this level. The state's best player must be landed.

Charles: Two words. Marshon Lattimore. This guy can flat out play. Looking to add depth to the defensive backfield, Lattimore, is a guy who is talented enough to play either side of the ball and like McMillan, could step right in and battle for playing time at OSU, if he does decide to call Columbus his future home.

Ian: As far as importance, I think it has to be Marshon Lattimore. Lattimore is in the top 50 players in the country, with plenty of schools vying for his talent. Lattimore is also from the Glenville pipeline, so I think it's important to land him above everyone else left on the Buckeyes' board.

Miles: Lattimore is a pretty popular pick among LGHL staff members and deservedly so- he's a special talent. I'm going to go in a different direction though with Palm Beach Garden (FL) Dwyer wide receiver Johnnie Dixon. While the Buckeyes had a solid receiving core this year, there weren't many that could make the special play as was evident in the Big Ten Championship game. Dixon is the kind of guy that can go up and make the big catch in important situations, kind of like we've seen Florida State's receivers do time and time again for Jameis Winston this year. I feel it's extremely important that the Bucks land Dixon.