The finale in our 4 part series of dispatches from Ann Arbor.

Before I'm able to properly describe any other sights and sounds (and tastes) from the weekend, the elephant in the room must be addressed...the Auburn/Alabama game. That, after all, was just as important part of the weekend's experience as a trip to any burrito joint.

I didn't see most of the Iron Bowl. Traffic was a mess on State Street, even over 90 minutes after The Game had concluded, so Taylor and I ended up walking most of the way back to our hotel before we finally caught a cab. We stumbled back to the room right around the time the 4th quarter had started. Our plan was for us to both rest our achy feet, get my phone recharged and let myself get caught up to what I had missed, football wise (my phone had died around halftime), watch the rest of the game if it was interesting, and then head back out on the town for dinner later in the night.

I was only halfway watching the game, as I was expecting the emotional letdown of Alabama breaking the game wide open any second. Taylor was taking the opportunity to ask a bunch of football questions (so, which one is the Left Guard? What does he do? Which one is the Safety? Why does everybody think the red team is so much better than the blue team? They look about equal to me, etc), so I was answering those while pecking away at the laptop. Occasionally, Taylor refers to this (perhaps a teensy bit pejoratively) as "working at the internet factory." Oh, how was your day mining at the ol' Internet Factory? Mine any Retweets? Any Favorites? Dig up some comments? Those will fetch a good price, for sure. This is fine.

But a funny thing happened. Alabama DIDN'T blow the game open. I decided that however this ended up, I needed to experience this in the company of other invested parties, so I stepped away from the ol' Internet Factory and headed down to the hotel lobby, where a group of other Buckeye fans were watching on a TV. You know how the rest of this story goes.

I'd like to say that I handled the outcome with the dignity and grace of a principled Serious Professional, without bias or preference. That would be a lie. Thankfully, this was a hotel lobby, and not a press box, so nobody threw me out for hugging random strangers, or for yelling at the top of my lungs, or blasting The Buckeye Battle Cry, with little to no regard for the fact that this hotel was in fact in Ann Arbor, the veritable belly of the beast, and that not every guest would applaud my musical choices. Spoiler alert, they didn't!

How does one follow up that kind of emotional high? Between that finish and the ending of the Ohio State game, I was ready to be retrofitted with every mechanical device this side of Dick Cheney to keep me from having a heart attack. After a bump that dramatic, any food, any city experience could pale in comparison. It would be impossible to evaluate fairly.

But that doesn't mean that we didn't try.

Per the recommendation of Zach Travis, we stopped by BTB (Big Ten Burrito) on our way out of Michigan Stadium, in part because we knew we had no way in hell of getting back to the hotel any time soon, and in part because what better way to follow up a heart-stopping win than by burying said heart in a fluffy tortilla and smother it in beans and cheese? 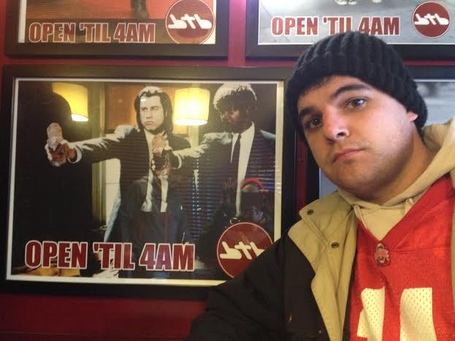 BTB wasn't a literal hole in the wall, but it was close, a tiny shack with juuuust enough room for a single table, already packed with students by the time we arrived. The walls were decorated with famous movie posters photoshopped with burritos, along with a single TV, showing Georgia Tech battling Georgia. Taylor and I both bought deluxe burritos (steak and chicken), and I think it's fair to say they compare favorably to Chipotle, or a similar burrito. The burrito was a teensy bit sweet, and Taylor kept raving about the "impeccable structural integrity" of the burrito.  A strong tortilla IS a critical factor in a good burrito, after all. Michigan is an engineering school of some renown. I would expect nothing less than superior burrito structure. 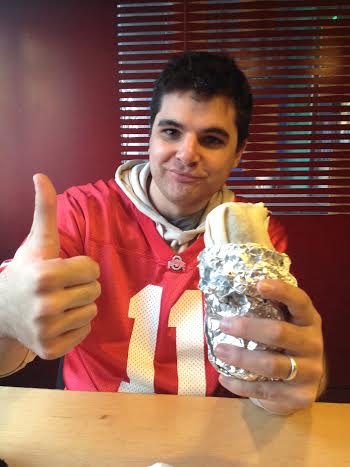 Completing our delicious-but-terrible-for-you college town food tour, we also swung by RJ's Coney Island, since people have told me that Michigan is apparently known for Coneys. For my money, I could have sworn they sell the exact same thing in Cincinnati, but as a Serious Professional, I had to try it out.  At noon, RJ's was also packed with students and other fans, trying to chase away hangovers with big, greasy breakfasts.

Taylor ordered a Southwestern Chicken Sandwich that didn't look like much, but tasted great. My chili dogs (look, let's just call a spade a spade here) were also good (probably a little better than anything at Skyline), but the real winner were the fries. The loser? My health, especially considering that this weekend happened right after Thanksgiving. If you need me between now and the B1G Championship Game, I'll be on the treadmill. 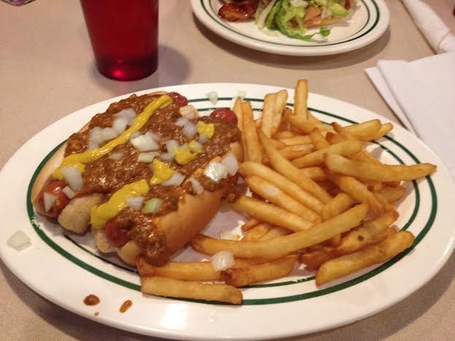 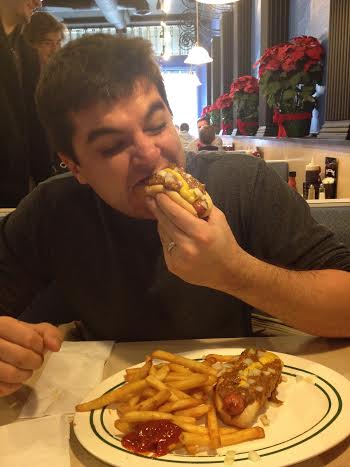 We also had a chance to take in downtown Ann Arbor's non-culinary attractions. There was a little shopping arcade, full of antique stores and clothing shops that were waaaaay above my paygrade just across the street, one cute enough that it could have come directly out of a children's Christmas book, or perhaps a Norman Rockwell painting. Downtown features two movie theaters, accompanied by equally massive marquees, a permanent farmers market at Kerrytown (one that was in full-fledged craft-mode on Sunday morning, which Taylor thought was an excellent counterbalance to a weekend of non-stop football), and equal parts unique college-themed stores and not-quite-kitschy Americana. It's really a good fit. 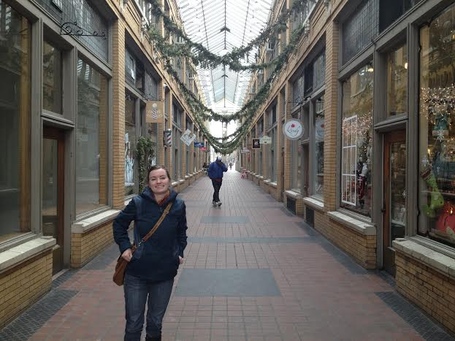 I realize I may lose my Ohio State Blogger License for saying this, but Ann Arbor really is a great college town, and for many definitions, maybe a better one than Columbus. The campus is located in a clean and newer area, and the city is in the perfect sweet spot for College Town size (around 113,000). It's big enough to boast a few attractions and institutions at least somewhat independent of the university (unlike say, a tiny college town in the middle of nowhere), but it isn't so large that the university risks getting swallowed up. It retains a somewhat "crunchy" vibe commonly associated with some of the best college towns, and is near a major US city. It would probably be a great place to go to school or live. You know, if Michigan wasn't there.

Overall, the weekend went better than could have been expected. My accommodations at Hampton were great, we were a part of two superior and emotional college football games (which might, just MIGHT, have been enough to make a reluctant college football fan out of Taylor), we witnessed Ohio State turn in another undefeated regular season, and I got to eat a bunch of food that is terrible for me.

AND there was a bald eagle.

Really, it doesn't get much better than that.