Here is our weekly look at the snaps played by Buckeye skill position players while analyzing the ways in which they were utilized.

In the final regular season game of the season, the Buckeye offense ran 60 plays. The team finished around the middle of the FBS (67th), averaging 73 plays per game during the regular season. When people think of Urban Meyer's high-octane spread offense, they think of the pace of play and getting snaps off at an Oregon-like pace. They do not huddle, but that doesn't mean they need to run plays every few seconds. Running a no-huddle offense and getting to the line of scrimmage does not allow the defense to make substitutions which is important when running a power run game because it wears the defense down and keeps them on their heels.

The offense took a huge step forward this season in both the passing and running game and it will be interesting to see how they play against Michigan State's stout defense and then another top defense in a BCS bowl.

Now, let's take a look at how the offense looked versus Michigan:

On Miller's touchdown pass to Jeff Heuerman, play-action opened up the middle of the field.

Michigan came on a cornerback blitz, which pushed the safety over to Devin Smith. Then the linebacker on Heuerman's side froze on the play-action which left Heuerman wide open in the seam. 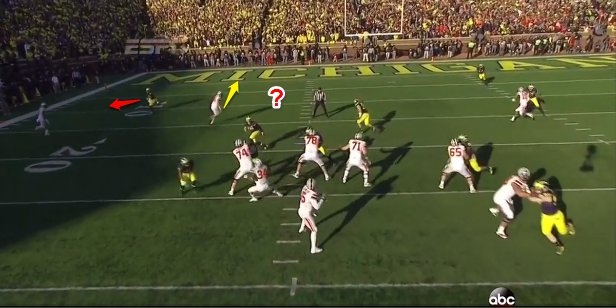 The safety on the other hashmark should have been closer to Heuerman, but this is what an effective run game does for an offense, it opens up play-action which leads to easy throws for Miller.

Miller ran the outside zone read with Brown and the read defender sat, expecting Miller to hand the ball off to Brown.

Corey Linsley and Pat Elflein doubled the defensive tackle and the defensive end extended out of the play with Brown. This left a gaping hole for Miller to exploit for a huge gain.

Here is the double tight end look that the Buckeyes used again on Saturday. This is their 12 grouping (2 WR, 2 TE, 1 RB) with their best WR blocker lined up in the flex (Fields).

Tom Herman has to love his chances with his excellent offensive line, the two tight ends, Fields and Hyde. They basically make a pocket for Hyde as he waltzes into the end zone.