Ohio State recruiting: Looking back at the 2013 class

Land-Grant Holy Land takes a look at the impact the nine offensive players in the freshmen class had on the 2013 season and what kind of impact these players could have in the future.

Share All sharing options for: Ohio State recruiting: Looking back at the 2013 class

The 2013 recruiting class was Urban Meyer's first full class as the head coach at Ohio State. He continued his success with recruiting as he signed the second ranked recruiting class according to the 247Composite rankings. This feat was especially impressive because he didn't have as much time to build relationships with recruits that other coaches had.

We begin by taking a look at the nine players the Buckeyes signed on the offensive side of the football. Next, we'll look at the defensive players that were signed by the Bucks in 2013.

Note: There were originally 10 offensive players in the class, but offensive lineman Timothy Gardner was sent home, wound up going to prep school, and is now an Indiana pledge.

2013 season: Unfortunately Barrett tore his ACL in October of 2012 during his senior season of high school. He enrolled at Ohio State in January and did a lot of his rehab in Columbus. Barrett redshirted this year, which was probably inevitable with or without his injury. Fortunately, he was able to participate in fall practice and was in full uniform for all of the games.

Future outlook: Of the three quarterbacks not named Braxton Miller who will be on the roster next year, I think Barrett is the most talented and the best fit for the offense. I'm projecting Barrett to start anywhere from three to four years depending on if Braxton stays in school or goes to the NFL.

2013 season: Elliott was very impressive in his freshmen season, ascending all the way to the number two spot on the depth chart at one point. Carlos Hyde got almost every carry in the last nine games of course. He did make the most of his time on the field, however, as he carried the ball 32 times for 262 yards (8.7 YPC) and two scores, while catching 3 balls for 23 yards and a score.

Future outlook: Following an impressive freshmen season, Elliott will be the favorite to replace Carlos Hyde going into the 2014 season. While he isn't a proven commodity just yet, you have to be excited for his future at Ohio State. He has a chance to be the next great Buckeye running back. 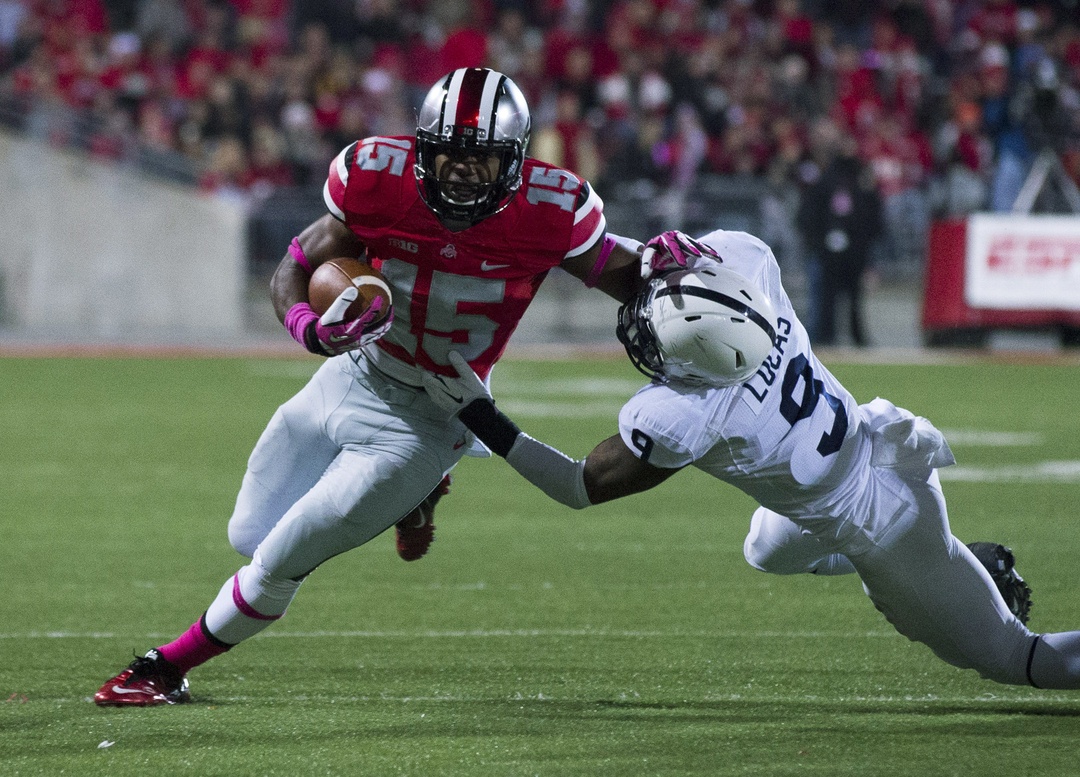 Future outlook: Wilson had a solid freshman year, but he should be a much bigger weapon once he refines his ability to block and bulks up a little bit to take on the physical toll of more regular contact. He could very well develop into a guy that's a threat to take it to the house on every play he's on the field.

2013 season: Ohio State had two already established tight ends on the roster at the start of the season in the likes of Jeff Heuerman and Nick Vannett, so Baugh was redshirted because he was unlikely to see much playing time, if any at all this year. His preseason off the field issues didn't help.

As long as Baugh develops more as a blocker, he could start for at least two years and have a very good career in Columbus.

Future outlook: Urban Meyer has had some good tight ends over the course of his football career. Baugh has the athleticism, size, and speed to excel in this offense. As long as he develops more as a blocker, I think he will start for at least two years and have a very good career in Columbus.

2013 season: Clark appeared poised to get some playing time his freshman year, but he went down with a broken fibula and dislocated ankle in Ohio State's 76-0 rout of Florida A&M back in September. Fortunately he's expected to receive a medical redshirt and would still have four years of eligibility remaining.

Future outlook: The speedy receiver has the speed and pass catching ability to excel in the spread offense. As long as his rehab goes according to plan (he is no longer in a walking boot), he should be ready in-time for fall camp, if not sooner. I think he has the ability to be a solid contributor to the offense as soon as next year.

2013 season: Due to an injury suffered during the summer to go along with his lack of experience at the wide receiver position, he redshirted this year. Marshall played quarterback during his high school days in Middletown so his learning curve was longer than some first year wide outs.

Future outlook: There are a lot of Buckeye fans excited to see Marshall play and it's pretty easy to see why. He has the ability to play the much talked about "Percy Harvin" role. As long as he develops as a receiver, he should have a very good career at OSU. I think he's going to have a breakout redshirt freshmen season.

2013 season: The sole junior college player in Ohio State's 2013 recruiting class sat out and redshirted in his first year as a part of the football program. Smith will have two years of eligibility remaining when the 2014 football season rolls around.

Future outlook: After watching Smith's highlights, I came away very impressed. He's not huge, but at 6-foot-1-inch, 190 pounds, his size is solid, to go along with very good speed. There is going to be a lot of playing time available at the wide receiver position next year and I think Smith takes advantage of this opportunity and has a big impact on the team next year.

2013 season: Ohio State had an established starting five on the offensive line, to go along with a couple of very solid backups heading into the 2013 season, so Lisle, who needed to develop, redshirted this year. He had the luxury of taking a learning year by watching four very good senior offensive linemen.

Future outlook: Lisle could be in the starting lineup as early as next year. As I mentioned before, there are four starters returning next year. I envision Taylor Decker moving from right tackle to left tackle and Pat Elfein claiming one of the guard spots. After that, there are three spots for five or six linemen to compete for this spring and in the fall.

Future outlook: He could be a guard or a center, but it's unclear which he'll end up playing. I would guess he'll be a center and backup Jacoby Boren, who will be a junior next year. This would give Price the opportunity to start for two years.