Ohio State recruiting: Looking back at the 2013 class, Part 2

Land-Grant Holy Land takes a look at the impact half of Ohio State's freshmen defensive players had in 2013 and what their future impact will be.

Share All sharing options for: Ohio State recruiting: Looking back at the 2013 class, Part 2

The 2013 recruiting class was Urban Meyer's first full class as the head coach at Ohio State. He continued his success with recruiting as he signed the second ranked recruiting class according the the 247Composite rankings. This feat was especially impressive because he didn't have as much time to build relationships with recruits that other coaches had to do so.

Previously, we talked about the offensive players that were in this class. Today we're going to take a look at 7 of the 15 defensive/special teams players that were a part of this second ranked recruiting class.

2013 season: You can't agree on everything, but I think most people can agree that Bosa was Ohio State's most dominant freshmen. The 6-foot-5-inch, 270 pound defensive end appeared in all 13 games, posting 39 tackles, 12.5 of which were for loss, and 6.5 sacks. He also recovered a fumble for a touchdown against Northwestern.

Future outlook: Bosa was one of Ohio State's top three or four players on the defensive side of the football as a freshmen. If he continues to develop the sky is the limit. We're still pretty far away from the 2016 NFL draft, but I wouldn't be the least bit surprised if Bosa was only on the team for two more seasons. It's going to be fun to see how good he is by the end of his time in Columbus. 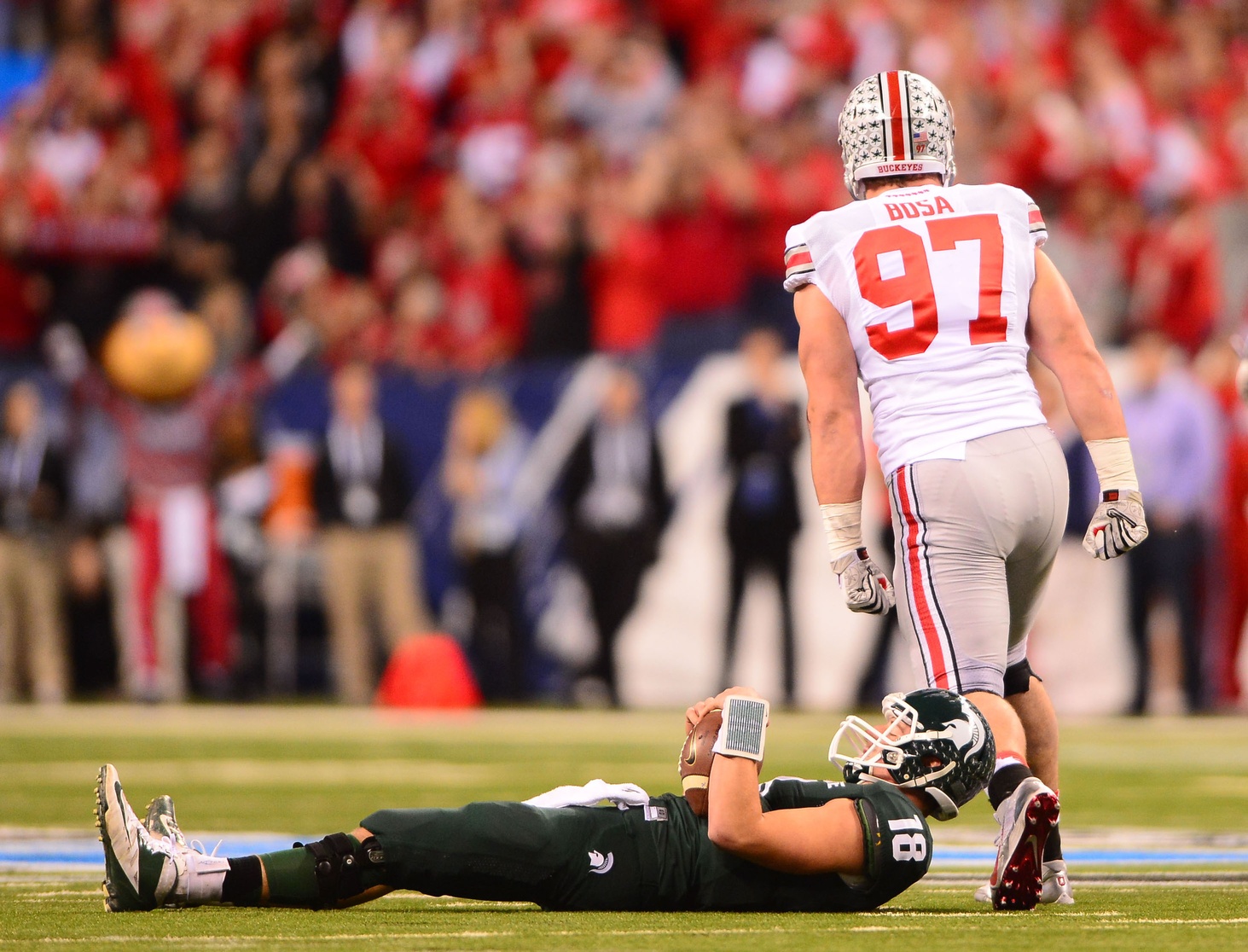 2013 season: Many people considered Sprinkle to be a project when he committed to the Buckeyes in the spring of 2012. He ended up redshirting for the 2013 football season in order to develop and learn from defensive line coach Mike Vrabel.

Future outlook: It's really hard to say how good Sprinkle is going to be by the end of his time in Columbus. While there's definitely a chance he could be a productive player, there's also a chance that he doesn't produce. Time will tell with Sprinkle.

2013 season: The massive defensive tackle from South Carolina made a couple of very brief appearances early in the football season. Depending on how many snaps he participated in this year he may or may not be eligible to be redshirted, though it's unclear as things currently stand.

Future outlook: I'm very excited to see Hill get extended playing time because I think he has the tools to be a very good defensive tackle/nose guard at the college level. While there isn't going to be a lot of playing time on the defensive line next year due to the returns of Noah Spence, Joey Bosa, Adolphus Washington, Tommy Schutt, Joel Hale, Michael Bennett (probably), Jamal Marcus, and company, he should see a lot of playing time starting in 2015. I think he's going wreck havoc in the backfield during his career at OSU.

2013 season: Just like Sprinkle, I think the Ohio State staff knew Munger was going to be a bit of a project. He redshirted this year because he wouldn't have seen any time on the field due to the great depth on the OSU defensive line.

Future outlook: I wasn't too high on Munger during the recruiting process and my opinion hasn't changed. I think he would be better on the offensive line than the defensive line. I've been wrong before, but I don't think Munger is going to amount to much playing on one of the best defensive lines in the country. If he switches to offense, I think he could start at guard for a year or two.

2013 season: The trend of redshirts on the defensive side of the football continues with the versatile defensive end/linebacker hybrid player (viper). Lewis, who is a very raw football player is fortunate to be leaning from Mike Vrabel and Luke Fickell.

Future outlook: I think Lewis could be a productive situational player at Ohio State. I don't think he's an every down player, but you don't need to be on the field every play in order to be productive. He's a guy the Buckeyes will bring in to rush the passer and will occasionally drop back into coverage like we saw Noah Spence do a couple of times this year.

2013 season: Johnson played pretty well in the limited time he saw on the field this year. He appeared in six games this year and recording 12 tackles. While most of his playing time came in blowouts, it was nice to see him out on the field.

If Ryan Shazier declares for the draft, Trey Johnson could slide into a starting spot next year.

Future outlook: Trey is one of my two or three favorites from the 2013 recruiting class. If Ryan Shazier declares for the draft, I think Johnson will slide into a starting spot next year. I think there's a chance Johnson emerges as Ohio State's best linebacker next year. His athleticism reminds me a lot of Shazier's.

2013 season: Mitchell, who posted high school numbers that were off the charts- took a redshirt this year, which I think was the best possible decision. He's a freak athlete and holds the national SPARQ record, but needed the year to develop as a football player.

Future outlook: Whether it's this year or next year, when Mitchell develops into a polished football player- and I think he'll eventually do so, I think he's going to be dominant. With his size and  speed he has what it takes to be a star in Columbus and could move on to do great things at the next level. It will be interesting to see the role his play on next year's team. If he doesn't work out in the middle, he could definitely move to the outside.