Ohio State recruiting: Looking back at the 2013 class, Part 3

Our final segment of our look at the 2013 OSU recruiting class, focusing on the defensive and special teams players we didn't hit in Part 2.

Share All sharing options for: Ohio State recruiting: Looking back at the 2013 class, Part 3

The 2013 recruiting class was Urban Meyer's first full class as the head coach at Ohio State. He continued his success with recruiting as he signed the second ranked recruiting class according the the 247Composite rankings. This feat was especially impressive because he didn't have as much time to build relationships with recruits that other coaches had to do so.

2013 season: While Worley was a pretty good player in high school, he came into college not knowing which position he would be playing at the college level. Fortunately the Buckeyes didn't need him to play this year, so he was able to take a redshirt season in order to get a better idea of which position he'll be playing at the college level, which could be linebacker, safety, or "Star".

Future outlook: I think Worley will end up playing either linebacker or "Star" – which is where we saw a bigger guy like Tyvis Powell play this year. I'm not sure how successful he's going to be in college right now. I'd like to see where the coaching staff decides to play him when he gets on the field in a year or two.

2013 season: Expectations are high for Apple, who was one of Ohio State's top signees in the 2013 recruiting class. There wasn't going to be much playing time available for him as a freshmen, so he wound up being redshirted. I like the idea of giving cornerbacks a year to grow because it might be the toughest position to come in and play from day one as they see very few passes thrown their way at the high school level.

Future outlook: I think the Buckeyes have a good one in Apple. He could definitely compete for a starting role or significant playing time as early as next year as Bradley Roby is leaving for the NFL draft after Friday's Orange Bowl. Armani Reeves has been less than impressive this season leaving the corner spot opposite Doran Grant up for grabs when fall camp arrives. 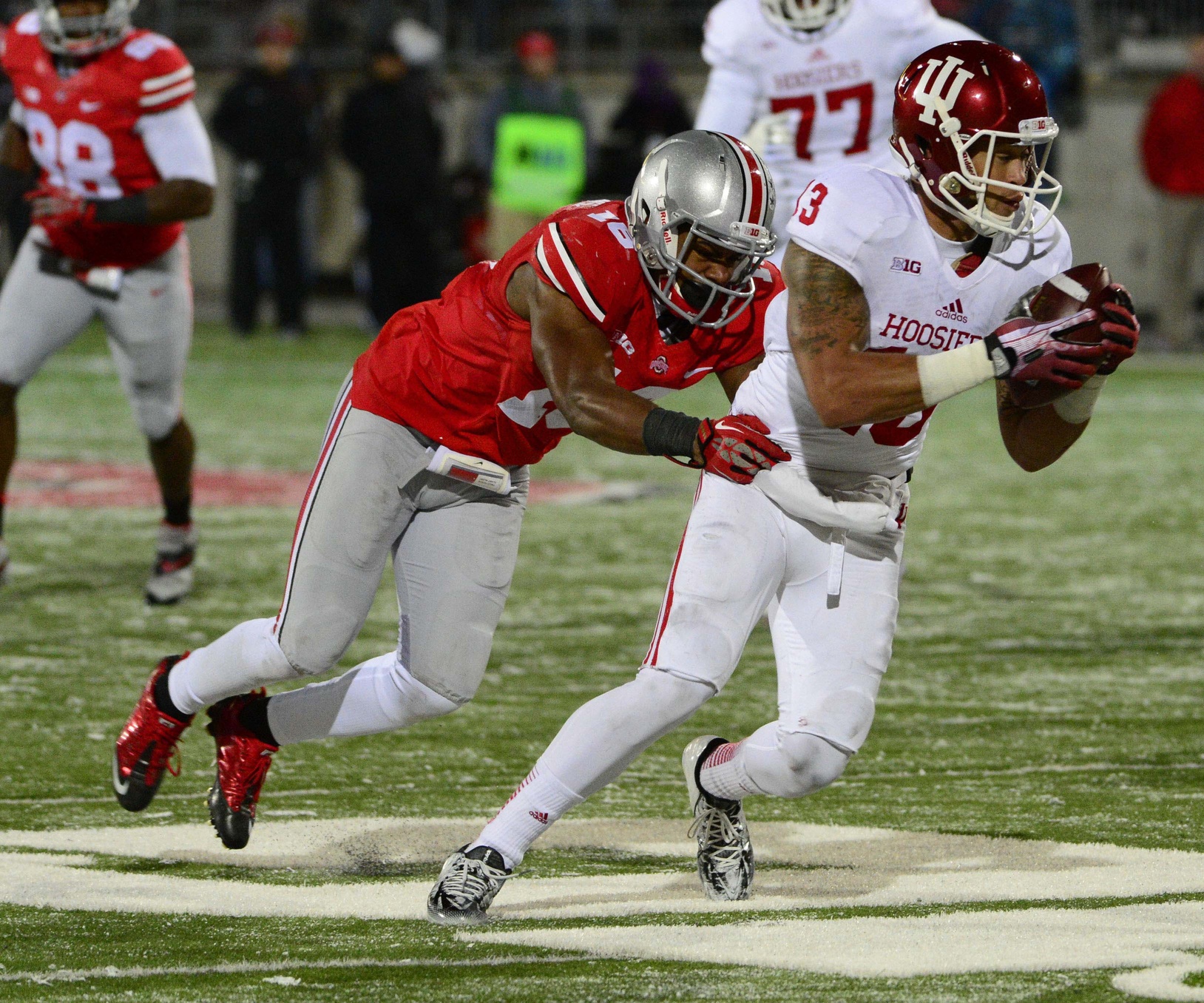 2013 season: I thought Burrows was the most college ready of the three corners OSU signed in 2013 and it appears that has been accurate. He saw a lot of time on special teams and saw a good bit of time at cornerback when the Bucks had injuries in the defensive backfield all year long. He totaled 11 tackles in limited time and could see an expand role in Friday's Orange Bowl if Bradley Roby is unable to go.

Future outlook: It's still up in there if he stays at cornerback in college or shifts to safety. I think he could be good at both positions and will have a chance to see extended playing time as soon as next year at either safety or cornerback. Burrows has the ability to do big things for the Buckeyes over the next couple of years.

2013 season: Conley is one of my favorite prospects Urban Meyer and his staff were able to reel in. The one time Michigan commitment posses very good speed to go along with above average coverage skills. He didn't even play football before high school, so he's still learning the game and improving every day. He redshirted for the 2013 football season.

Future outlook: I think Conley has the highest upside of the three cornerbacks Ohio State took in the 2013 class, but on the flip-side, he's probably the most likely to bust. I tend to lean more towards the side that he'll be a very good college player and could see the field as early as next season.

2013 season: Ohio State's highest rated signee saw some time on special teams and it blowout games this year totaling 12 tackles. He's going to be starting as Ohio State's nickleback in Friday's Orange Bowl as Tyvis Powell slides back to free safety replacing Corey "Pittsburgh" Brown. It will be interesting to see how the highly touted freshmen performs in his first career start.

Future outlook: I think Bell is going to be a very good college player and if he maximizes his talent, he could be a very good NFL player too. It will be interesting to see if he'll start next year as there's a chance Christian Bryant will get a medical redshirt and a 5th year of eligibility. In any event the 5-foot-11-inch, 195 pound safety should see a big chunk of playing time in 2014.

2013 season: Most people didn't expect Lee to get an offer from OSU, but he went into two of the Buckeye's summer camps in 2012 and earned an offer. He wasn't going to see the field this year, so he redshirted, which I think is great because he has some developing to do.

Future outlook: It's tough to predict what Lee will do at the college level. In high school he played defense, but his focus was quarterback, so he has quite a bit of learning to do. If he develops, there's a chance he'll have a bright future in Columbus, but if he fails to translate his talent to defense, he might be a potential special teams standout.

2013 season: Thompson is another prospect I really like. Unfortunately he suffered a broken ankle before the season started, so he had to take a redshirt this year to rehab his injury. The good news is rehab is going pretty well and he should be ready for spring ball.

Future outlook: I think Thompson is very underrated and will be a very productive player in his career at Ohio State. While there isn't going to be a ton of playing time available next year, I think he could see significant playing time as early as the 2015 season.

Johnston should continue to be one of the nation's best punters for the next three years, with the potential to win the Ray Guy award every year

2013 season: In retrospect, it's probably a good thing that Johnny Townsend decommitted from Ohio State on National Signing Day 2013. Johnston came to Columbus by way of Australia and has already established himself as one of the top punters in college football after averaging 43.5 yards per punt, with a lot of them pinning the opponent inside the 20 yard line.

Future outlook: There's not too much that needs explaining here. Johnston should continue to be one of the nation's best punters for the next three years, with the potential to win the Ray Guy award every year. Urban Meyer and his staff were able to find a gem in Johnston.