Michigan State has one of the best defenses in the country. How will the Ohio State offense attack the Spartan defense?

Share All sharing options for: Big Ten Championship 2013: How Ohio State will run on Michigan State

This is where this matchup is so intriguing: the Buckeye run game versus the Michigan State rush defense. Ohio State has rushed for 3,855 yards, the best in the nation, and they are tied for 4th in the nation with 40 touchdown carries.

I chose the Nebraska game because they were one of the only teams to have success versus this Michigan State run defense. The Huskers run similar formations to the Buckeyes, so I thought it would be a good measuring stick to see how the Spartans line up and play against the different formations. Nebraska found rushing lanes the entire afternoon, rushing for 182 yards on 32 carries. With Taylor Martinez out, the Cornhuskers were relying on their two back up quarterbacks and had a 50/50 run/pass split.

Everyone knows what Carlos Hyde, Braxton Miller and the best offensive line in the country do; let's take a look at how they should attack the vaunted Michigan State rush defense.

1. Getting linemen to the second level 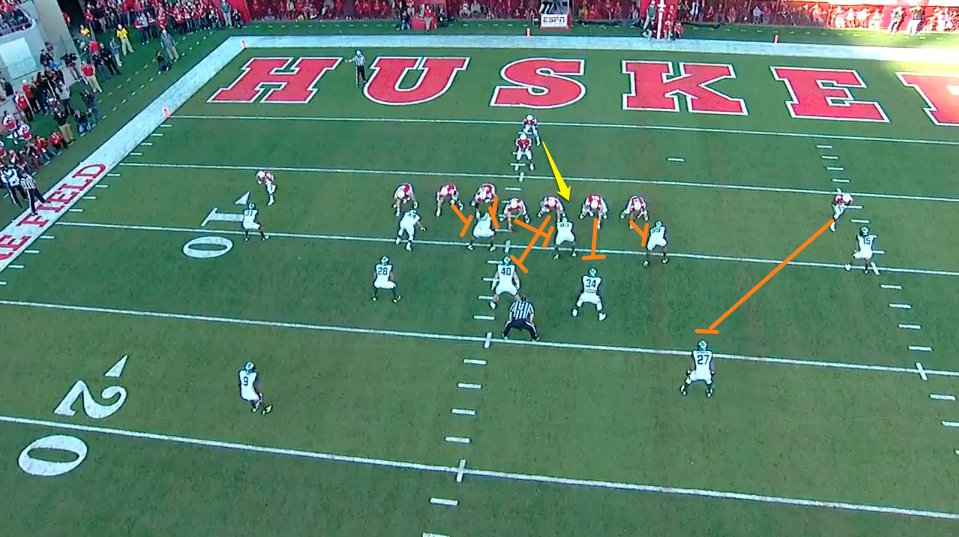 Nebraska came into this game wanting to attack the A and B gaps of the Spartan's defense. They wanted to be physical with the MSU linebackers and get the linemen to the second level, taking them out of the play immediately. For the most part, Nebraska did a great job at getting a helmet on their MIKE linebacker Max Bullough (#40), their STAR Taiwan Jones (#34) and their SAM linebacker Denicos Allen (#28). The offensive line took care of MSU's defensive line for the majority of the day and did not have to double team much upfront. 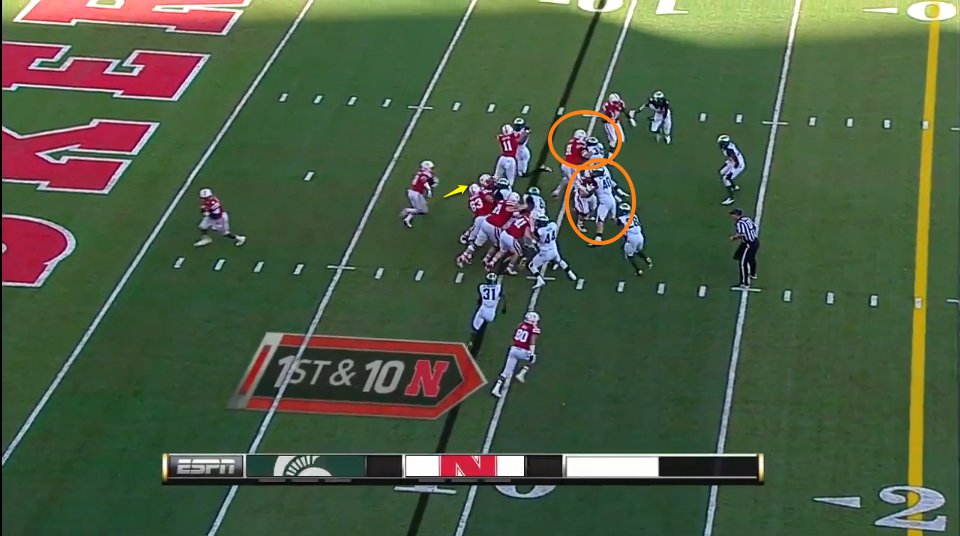 This is one of the good examples of the offensive line winning the battle in the trenches which allowed the left guard and the left tackle to get upfield on Bullough and Jones, making a hole for Abdullah to run through for good yardage.

2. Not getting to the second level 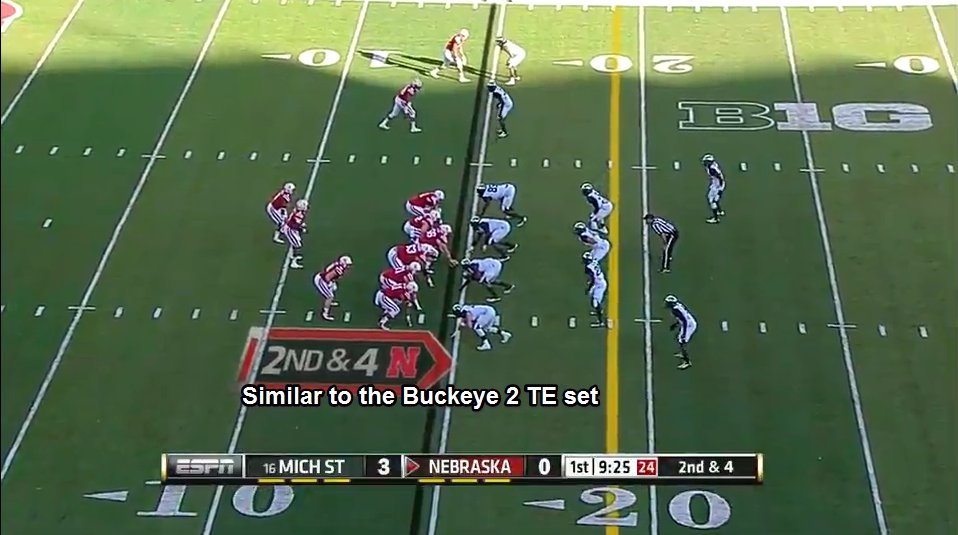 Nebraska came out in 12 personnel (2 TE, 2 WR, 1 RB). The Buckeyes ran this formation five times versus Michigan and it has been used much more recently towards the end of hte season by Ohio State. This is an example of Bullough making a great play and the 'Huskers missing their block on him. 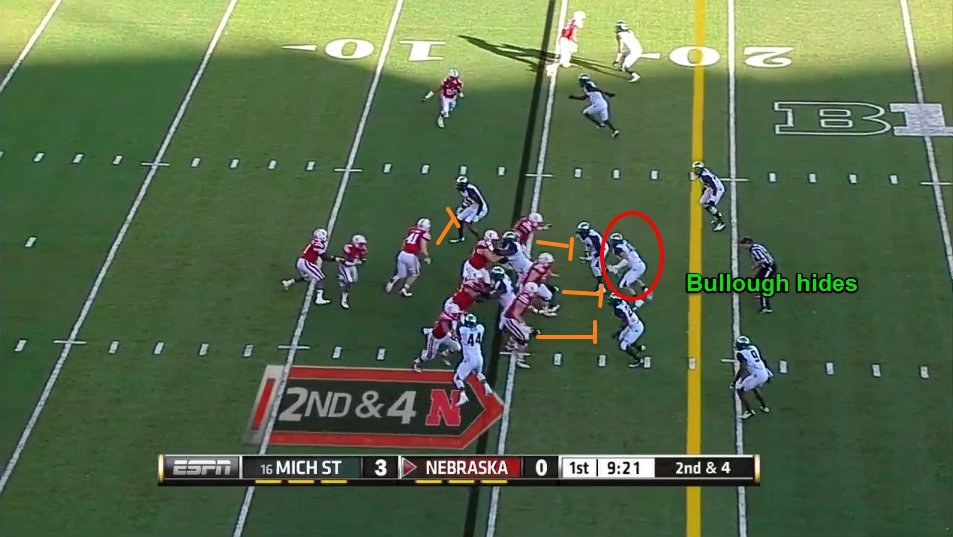 For the most part, the play is executed properly by Nebraska. The line wins their 1-1 battles and the other three linemen get upfield to get on the three MSU linebackers. 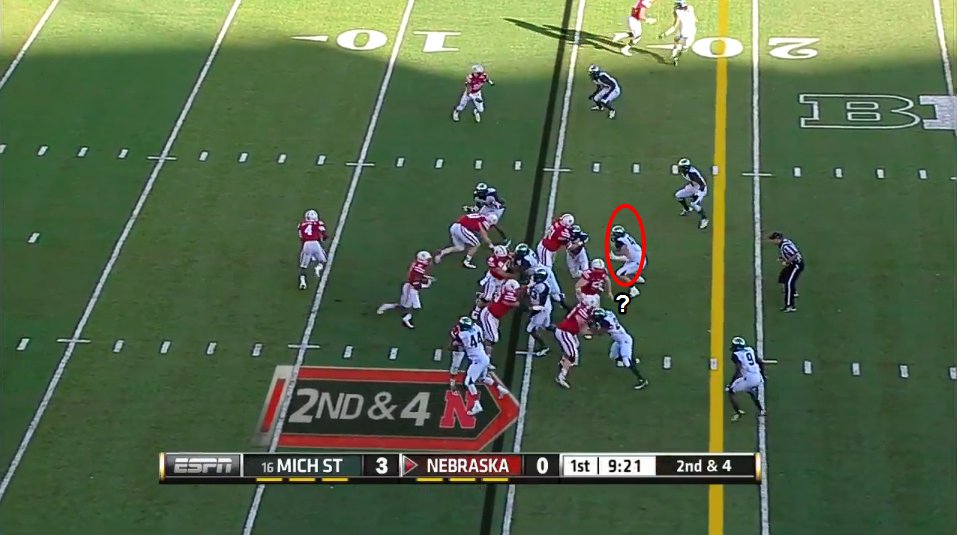 Bullough does an excellent job hiding behind Jones, which confuses the center, thinking that Bullough got caught up in the wash. 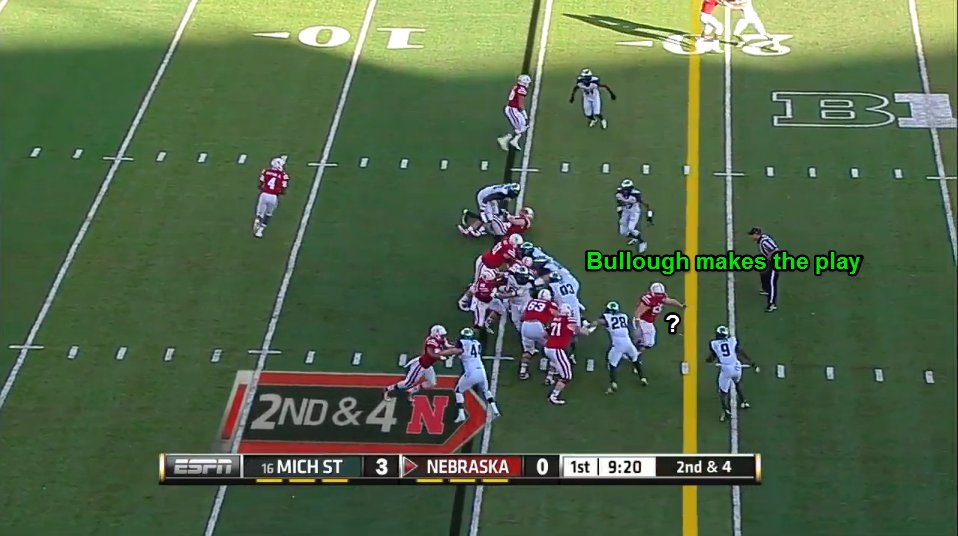 As a result, Bullough goes unblocked, fills the hole and makes the tackle at the line of scrimmage. Bullough did an excellent job on the play, seeing the center, hiding behind Jones and stuffing the run.

3. Spread out the defense 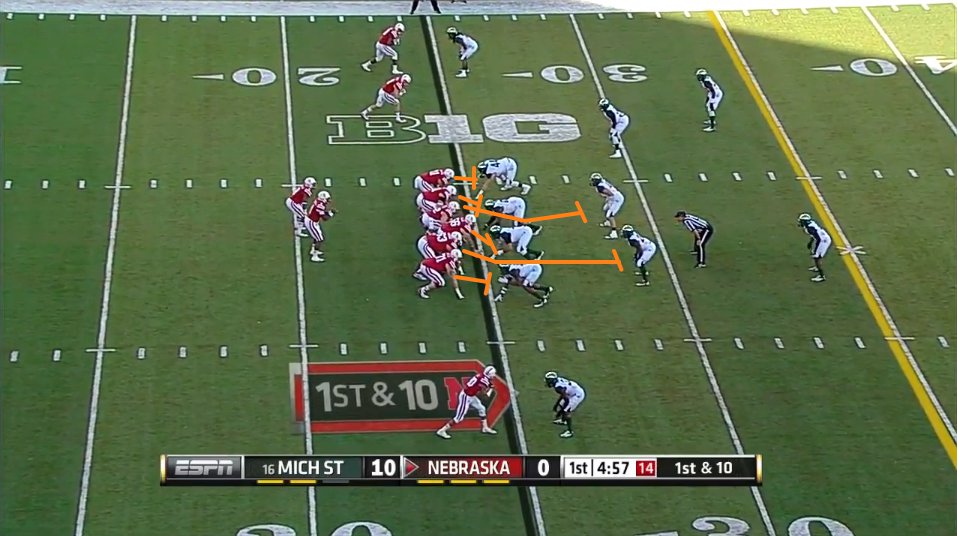 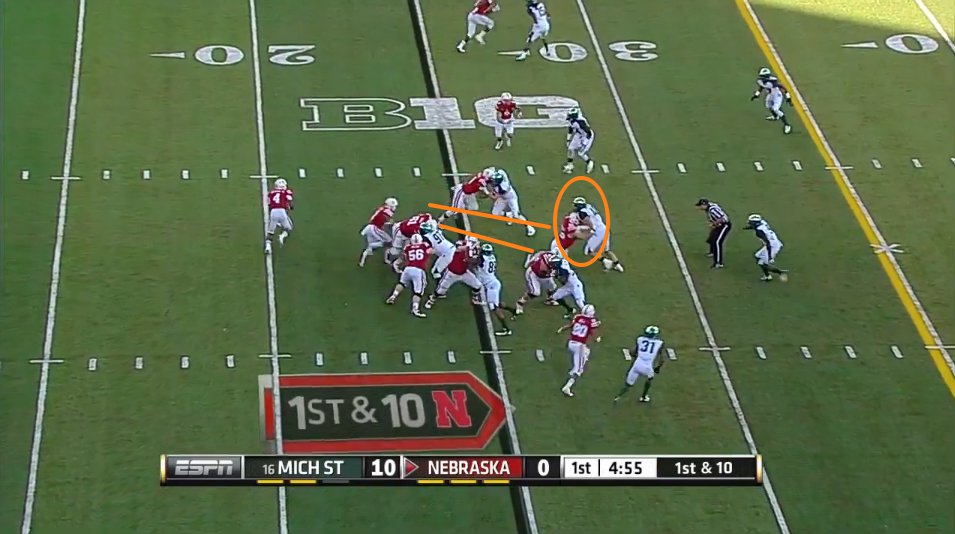 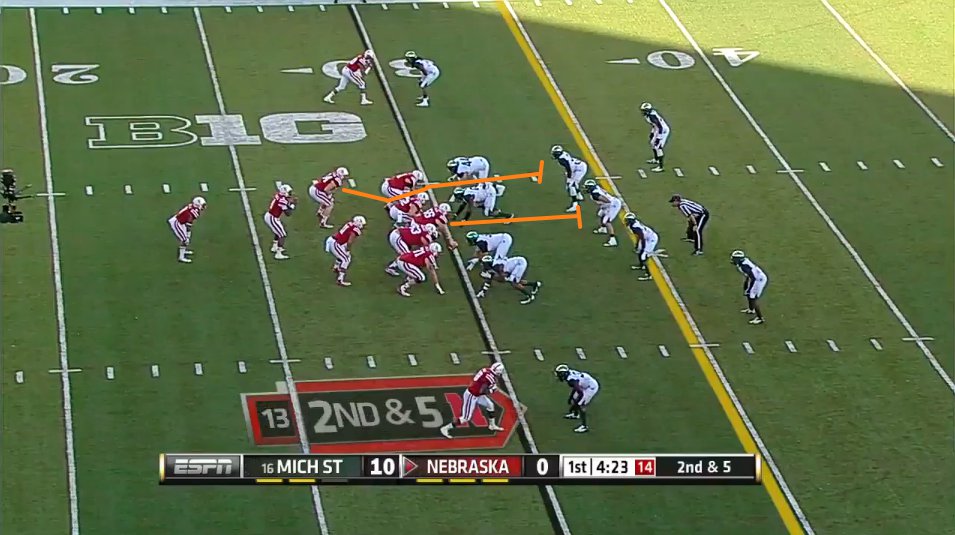 The Buckeyes run a similar short yardage formation but with Jeff Heuerman and Chris Fields flexed and Nick Vannett on the line of scrimmage. When Nebraska lined up in this formation, they were basically telling the Spartans that they are going to attack the A Gap. 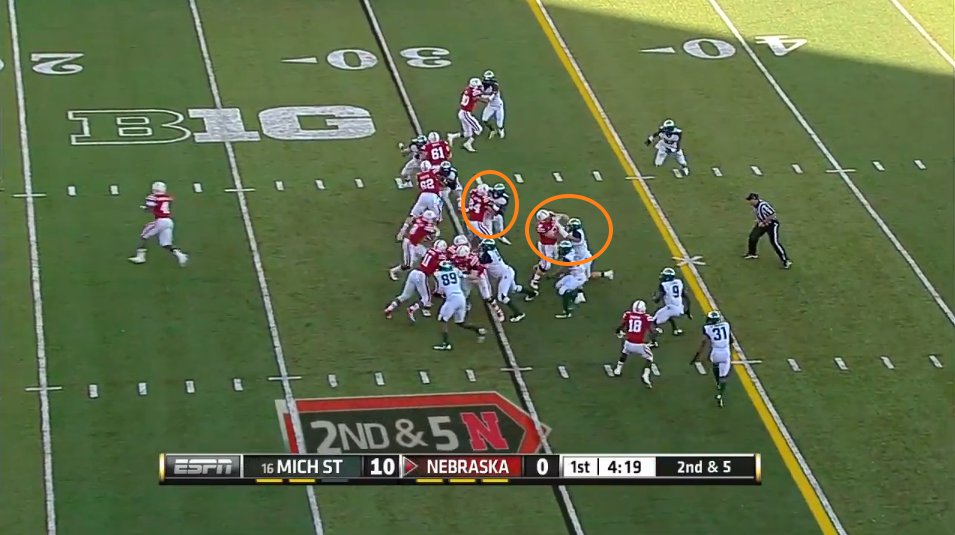 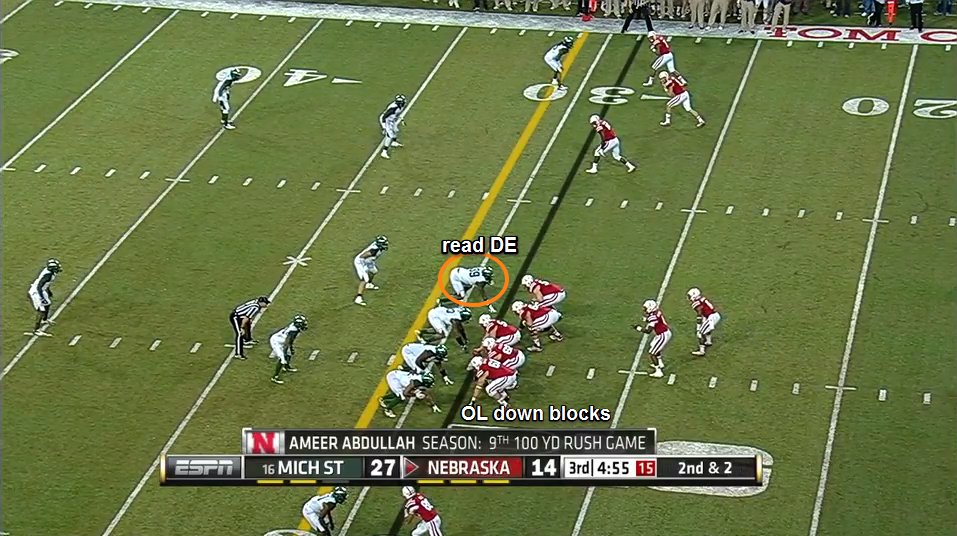 With Taylor Martinez out, the Cornhuskers were on their third string quarterback Tommy Armstrong Jr. The 'Huskers had success running the ball between the tackles with Abdullah but they did not run a lot of read option with both back-up quarterbacks sharing time. 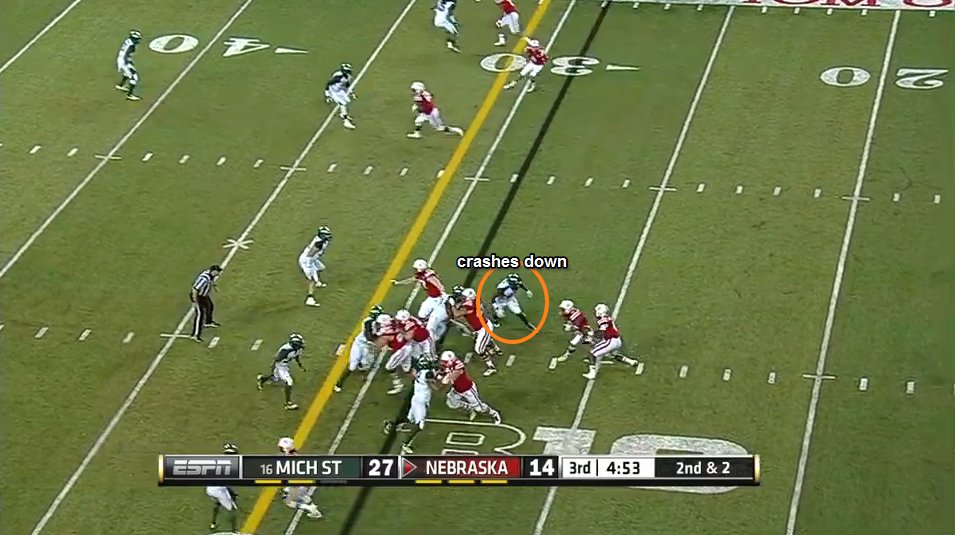 Armstrong Jr. reads the read defender correctly (Shilique Calhoun) and pulled the ball as he crashed down on Abdullah. 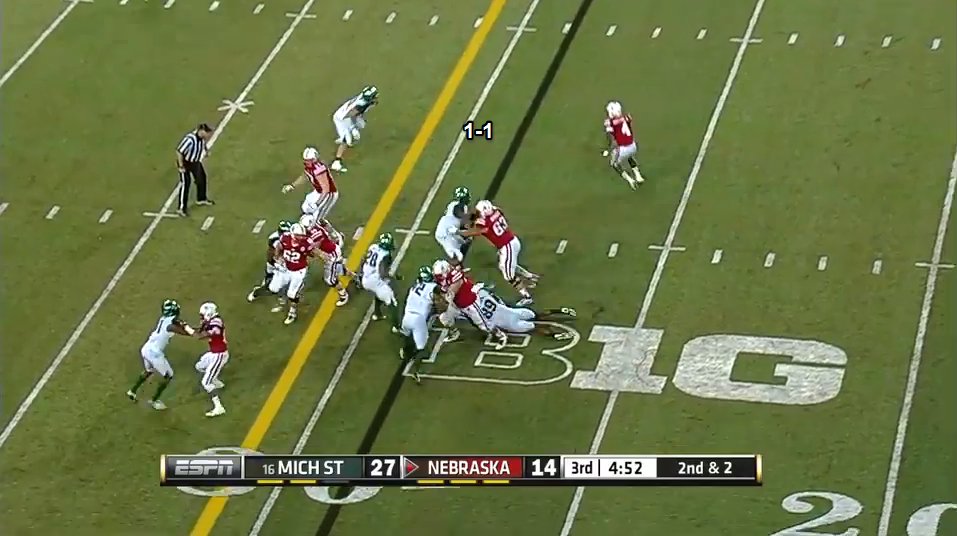 This leaves Armstrong Jr. one on one in the open field with Bullough. Although Bullough is one of the best linebackers in the conference, the Buckeyes would like their chances with Miller 1-1 against any linebacker in the country.

After rewatching this game, I believe the Buckeyes will be able to run against the Spartan's defense. The MSU defensive line looked vulnerable, as they were blocked 1-1, with success for most of the day. I think the big and athletic Buckeye offensive line will win their fair share of battles against the Michigan State front seven which will then open up playaction. I would open up the game by making Miller comfortable, throwing screens and getting him in rhythm, making the linebackers and secondary respect the pass. I would then attack  their front seven with Hyde and the offensive line, wearing them down the rest of the game. Once the linebackers are cheating towards the run, that is when Coach Herman likes to use play action and hit Heuerman in the seam or Devin Smith deep.

After reading this breakdown, how would you attack the Michigan State defense?