Land-Grant Holy Land keeps you up to date on the latest uniforms news in college football's final weekend.

In the final game for the Keg of Nails trophy, the Bearcats wore their regular helmet with a chrome facemask and reflective decals. 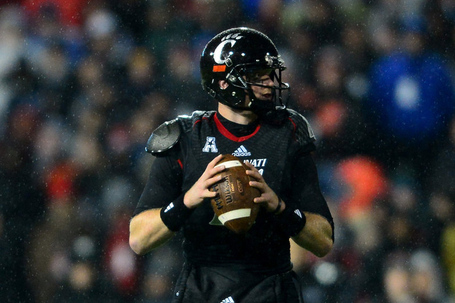 Head coach Charlie Strong previously said his team would not wear an alternate this season. However, he didn’t say anything about the team’s helmet. Like their opponent, the Cardinals wore reflective helmet decals in the battle for the Keg of Nails. 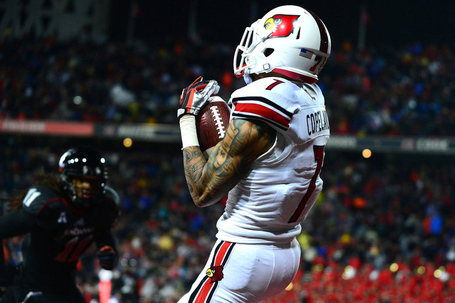 Earlier in the season, the Tigers wore a chrome helmet similar to what the Cincinnati Bengals wear. While the lid worn against the Cincinnati Bearcats were gray, the team wore an inverted helmet against Temple. 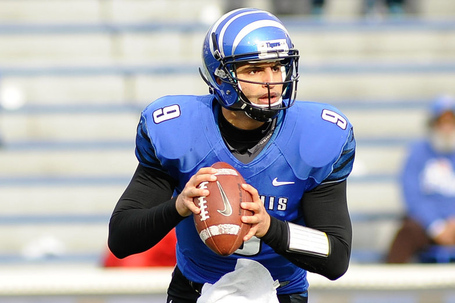 As the home team in the ACC Championship, the Seminoles will be wearing their traditional home uniforms. At this time, it is unclear what helmet their opponents, Duke, will be wearing, but both teams will have this patch on their uniform:

Against Ohio State, the Illini unveiled a helmet decal which honored the ten former players who lost their lives in combat. After deciding to wear the decal for the remainder of the season, the team added a Red Cross logo to the design in honor of those affected by the tornado that devastated the state.

In support of the relief efforts we will be honoring Gifford and Washington by wearing a Red Cross on our helmets! pic.twitter.com/x58DtRp2qi

Designated the visiting team for the Big Ten Championship Game, the Buckeyes will wear their standard away uniform. The team was only contractually obligated to wear their white Rivalry uniform against Michigan.

Though they'll be going back to basics, with the 42-41 victory over That Team Up North, the Buckeyes moved to 5-0 in the one-off Nike uniforms (sporting the following in the win): 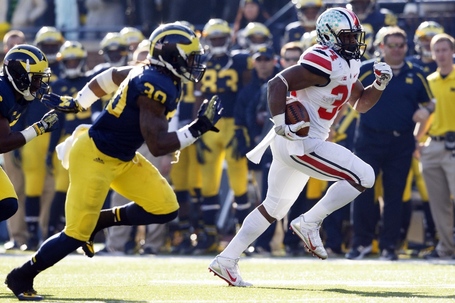 In their final game at Floyd Casey Stadium, the Bears will be wearing a throwback uniform, similar to what the team wore in the 1950s.

After the game, the team will be putting the uniforms up for auction after the game. Bidding for the helmet, jersey, and pants will begin at $750.

In the annual Army-Navy Game, the Black Knights will be wearing the away version of their 2012 Rivalry uniform. These uniforms are unique, as they feature a map in the numbers of the uniform.

The front of Army's uniform for the Army-Navy Game presented by @USAA! To see Navy's, go to http://t.co/WGsRAgR790 pic.twitter.com/4WL9supbAM

For the aforementioned matchup with Army, the Midshipmen will be wearing the home version of their 2012 Rivalry uniforms. Featuring one of the best helmets in college football, it’s sad this set won’t be their regular uniforms in 2014. as Navy is moving from Nike to Under Armour.

In the final two games of the season, the Huskies wore their "Dark Dog" uniforms. Similar to Cincinnati’s helmet, this included a chrome logo and facemask on the helmet, as well as reflective numbers on the jersey. With the loss to Bowling Green in the MAC Championship, it’s unlikely the team receives another special uniform for their non-BCS bowl game. 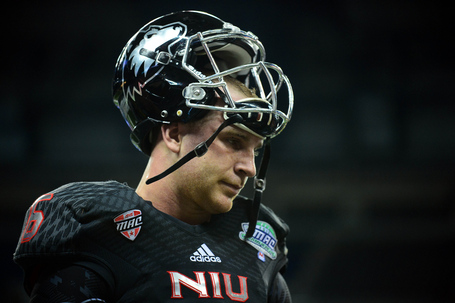 When the Bulldogs host Utah State with the Mountain West title on the line, the team will break out its all-black uniform for only the second time in school history.

Our #FresnoState FB captains have chosen to wear the black uniforms for the MW Championship game Dec. 7. #GoDogs pic.twitter.com/J2I73LXtsC

When the Arizona State equipment staff tweeted a picture of the unlimited combinations the team could wear, many worried the PAC 12 Championship would be devoid of the team’s school colors. However, Sun Devils will be wearing their traditional gold-maroon-gold look against Stanford.

Outside of the alternate black uniform the Cardinal wear once a year, they rarely stray from their traditional look. When they travel south to Tempe, the team will be wearing their white uniform with this patch:

Although they wore a throwback uniform during the 2007 season to honor a past national champion, the Tigers haven’t had an alternate uniform since the 1980’s. When Missouri took to twitter to unveil their look for the SEC Championship, Auburn decided to take a shot at their opponent.

#‎Auburn will wear its home uniforms in Atlanta. This is tradition. This is Auburn. pic.twitter.com/DtLpTHG2Js

As he’s done each week, Tigers’ head coach Gary Pinkel released the team’s uniform choice via Twitter. For their first SEC Championship game, Mizzou will be wearing their gold pants with their away uniform for the first time since their rebrand.

For the #SEC Championship game in #ATL, #Mizzou will wear a different helmet and a new #Nike uniform combination: http://t.co/4MecpHXktv. GP

Fans will have the opportunity to vote, via the coach’s website, on what combination they’d like to see the team where in their bowl game.

Breaking news: Fans will be able to vote on Pinkel's web site which uniform to wear for bowl. Pinkel:"Because I'm such a fun-loving guy"

When Adidas, the university's athletic apparel supplier, tweeted promotional pictures of a strange, zig-zag pattern, the general consensus was that the Aggies would be wearing a Zubaz-like uniform against Missouri. Luckily, the pattern was restricted to the player's cleats and sleeves.