Why you should hate Michigan State

As if the stakes weren't high enough already, Michigan State is, (last time I checked) IN MICHIGAN. Come, let us HATE.

Share All sharing options for: Why you should hate Michigan State

Our last chance to forcefully and unequivocally hate on a Big Ten team this football season is upon us – and the stakes couldn't be higher. Thanks to some miracles down south, Ohio State needs only a single victory on Saturday night to propel them to the BCS Championship Game (Auburn fans, I can hear you screaming all the way over here. Quiet down, it's unseemly). Their obstacle? The Michigan State Spartans, who boast a formidable defense, a quality coach, and a mascot who overdosed on HGH. The Buckeyes are favored by less than a touchdown, and the game on Saturday will undoubtedly be a war.

If you have any leftover hate from last week, now is the time to use it. You'll have plenty of time to replenish your stock after the holiday season. For now, let us prepare to HATE on Michigan State.

Michigan State IS IN Michigan

When one joins the Church of the Buckeyes, or receives a diploma from the university, one takes a particular solemn oath, to not give a damn for the whole state of Michigan. Historically, that oath has been associated with Our Most Hated Rival, Michigan.

HOWEVER, there have been unconfirmed reports that Michigan State University ALSO resides in Michigan, thus falling under the "No Damns Given" pledge. I consulted with Land Grant Holy Land's crack research team, along with geographical consultant Carmen Sandiego, to get to the bottom of this question. My findings are annotated below. 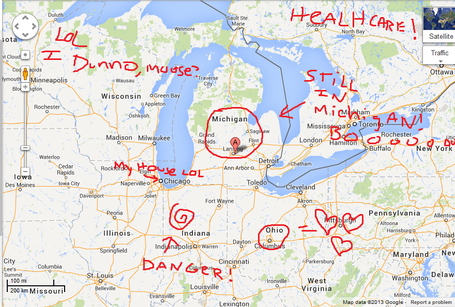 As the map clearly states, Michigan State University is clearly located in Michigan, nay, in THE VERY HEART OF MICHIGAN. It doesn't matter if the school was merely some two year automotive technician academy, it's zip code should be enough to merit the derision and scorn of every Buckeye fan.

Also, ACME is reporting that somehow, Carmen just stole Grand Rapids, reporting that "The crook fled in a plane with a red, green and white flag. She also wanted to photograph Mt. Popocatepetl, and was into Toltec art". Welp, good luck with that one guys.

Michigan State once gave an honorary degree to Robert Mugabe

If I was interested in journalistic Integrity or whatever, I'd probably mention that Michigan State revoked their degree from Mr. Mugabe back in 2008, but for these pieces, I'm not, so I won't. The world needs a reminder that the powers that be at Michigan State thought that giving this guy an honorary law degree back in 1990 was a good idea.

Just who is Robert Mugabe? Mugabe is the President of Zimbabwe, and has served in that capacity since 1987. That's a long time to get elected! He must be a very good politician to get elected that many times, right Forbes?

Oh, he's on the 10 Worst Dictator List. Whoops. Well, they're probably biased right? Washington Post, what do you think of Robert Mugabe?

The annual inflation is close to a hundred and fifteen per cent. The national treasury is bankrupt. The Army is engaged in a futile intervention in Congo’s civil war, at a cost of dozens of lives and an estimated million dollars a day. The health-care system is essentially defunct, and, with a quarter of the population infected with AIDS, the funeral business is among the country’s last remaining growth industries. When Mugabe said of Zimbabwe last year, "This is my territory and that which is mine I cling [to] unto death,"

Oh. WHOOPS. Excellent judgement there, Michigan State. Way to be a Leader, AND a Legend.

Let's step away from football for second, and look at who else this university has given us.

*Gary Starkweather, inventor of the laser printer, and subsequently, the inventor of the printer jam and the cryptic printer error message. WHERE THE HELL IS TRAY 4 DON'T WE HAVE INTERNS FOR THIS?

*Chris Hansen, noted catcher of predators. Sure, the goal is noble, but is it possible to make a more swampy television program? Also, he once got caught cheating on his wife thanks to hidden cameras. TURNABOUT FAIR PLAY, HMM?

* Shannon Brown, who steadfastly refused to be a productive professional basketball player while under the employ of Cleveland.

*Eric Snow, professional basketball player, long long soul brother to Aaron Craft. Perhaps the only NBA player under 6-9 that you, yes you, could conceivably defeat in H-O-R-S-E.

Because of that stupid 1998 game

There have been a lot of references to this game as of late. We touched on a few months ago, as did the official Michigan State website. The story is well known to anybody who was a Buckeye fan in the 1990s. The 1998 Buckeye squad was completely stacked, dismantling ranked West Virginia, Missouri and Penn State squads in the first four weeks of the season. The team featured the impossible to guard David Boston, hard hitting Antonie Winfield, and a terrifying linebacker in Andy Katzenmoyer. This was a squad destined for greatness, after years and years of near misses.

What happens? After taking a 24-9 lead in the 3rd quarter over a decidedly meh Michigan State team, the Buckeyes imploded, turning the ball over, getting a punt blocked, and eventually choked away the chance at a title, losing 28-24. The coach of that Michigan State team would then leave for greener pastures down south. You probably remember him now: ol' Nick Saban. PAWWWWL THEM BUCKEYES CREATED A MONSTER.

This game probably sticks in the craw of Buckeye fans more than any loss to a non-Michigan team over the last 20 years. Revenge must be swift and forceful.

And it must be on Saturday night.