Last night was the final undoing of a flawed team, and even that doesn't infuriate you so much as leave you disappointed, which might be worse.

Share All sharing options for: Ohio State-Michigan State: The warehouse of disappointment

It's 12:37 in the morning, way past the typical bedtime of my 26-going-on-70 self. Instead, I'm sitting in a nearly empty press box in Indianapolis, munching on pizza that somehow grew stale in the time it took me to head down to Urban's press conference, staring out over the empty airplane hangar of a football field below. That field is covered in confetti, and at least one green-clad person, maybe a Michigan State staffer, is lying on his back near the mess, soaking up the energy.  Mark Dantonio's press conference is echoing around the room, but nobody really seems to be listening. I'm not convinced Dantonio is actually listening to himself.

This wasn't how I imagined this evening ending, but this was bound to happen at some point in the near future. After 24 games, somebody was going to have to try and cobble together what happened after the time expired with another team scoring more points than Ohio State. Figuring how to do that was no longer a someone-else's-problem though; now it was my job.

I actually missed most of the ending, where things really began to Fall apart. Midway through the 4th quarter, the PA announced that it was time for the press to head down to the field, and to line up near the single elevator. There is no time to ask questions at this point, or finish crafting a tweet, or anything, but to grab a notebook and head down with the rest of the herd, or risk being left behind.

I'm admittedly not used to long sojourns to the field. My press box experience has typically been with high school fields, or small colleges, where field access is just a few big steps down the aluminum bleachers, and around the chain link fence. This was a multistory elevator ride, followed by a long march through a concrete bunker. From that level, the surroundings more resembled some Chicago Transit Authority storage warehouse than a football field. We were eventually herded into a waiting area, huddled around one TV, and a slight opening into the field.

The crowd exploded, but the scarlet-hued fans sat on their hands

Ohio State was lined up for a critical fourth down conversion. The crowd around the TV was too deep for me to get a good look, and my view of the actual field of play was obscured by a giant concrete slab, and at least two other men in suits. My only clue for the results of the play was to watch the crowd. The crowd exploded, but the scarlet-hued fans sat on their hands. That was all you needed to know, but before anybody could think about the implications, we're herded off to the field.

If you've never been on the ground level of a football game with more than 66,000 people in attendance, let me try to explain what's happening. Actually watching the football is nearly impossible. There is a mass of people everywhere on the sidelines, and you become acutely aware of how small you are. You do not have shoulder pads. You are not wearing cleats. You are 5'10, in a suit, and wearing shoes that seem completely out of place on a field of play. You can try to preen and catch a glimpse of the action through the window between people, but before you know it, a handler is pushing you along, to another spot on the sidelines, lest you get blindsided by a cart, a cameraman, or a wayward running back careening out of bounds. You have a general idea of what's going on, but you have to really rely on the sounds. 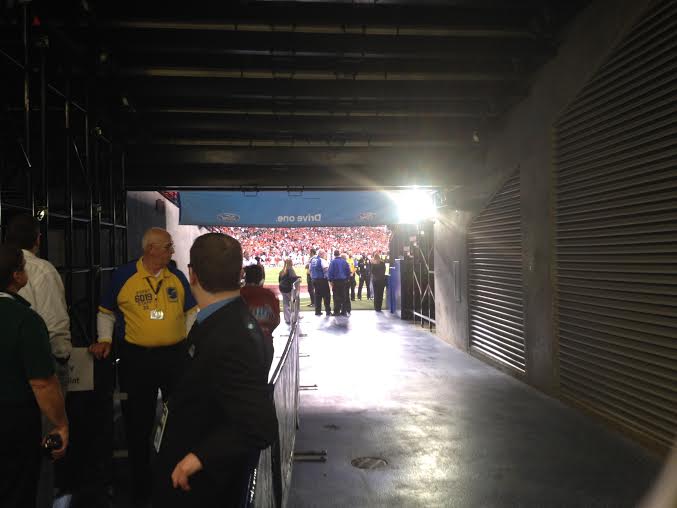 Fortunately, there are plenty of those. It's loud. You can tell that it's loud all the way in the press box, which felt so far away from the action at times it was almost as if I was watching on TV, albeit in an air-conditioned box where I'd be interrupted every few minutes with somebody handing me a new sheet of statistics. I walked in right under where most of the Michigan State fans were sitting, and their screaming and foot stomping and cheering and clapping was so loud that I could barely talk to the reporters next to me. I was hard for me to even think. I couldn't process any narrative at the time, or really adequately break down what I was seeing; I felt more like I was just reacting. I have a newfound sympathy  for athletes performing under these conditions, athletes who must quickly process and make lighting quick decisions under this duress. Nobody was actually trying to tackle me. All I had to do was stand somewhere and watch.

Shortly after I finally found an unencumbered vantage point, I caught Jeremy Langford break a tackle or two and bounce into the endzone, which then swallowed me up in a sea of noise whose intensity was not unlike standing right next to somebody who was starting a large lawnmower. I couldn't see where the breakdown on the play was, or how it unfolded, but I could see the clock, and I could see the scoreboard, and I knew the streak was over. There was nothing left but to survey the damage.

Ohio State fans dominated the crowd at Lucas Oil Stadium. During most of the game, the Buckeyes probably enjoyed at least a 65-35 advantage, but after that final score, it quickly drifted into 50-50 range as the scarlet and gray clad partisans headed towards the exits. The body language of those who stayed behind about as dour as you could expect, seeing as a chance at a national title berth was slipping away before their very eyes. The woman standing directly behind me was crying. I won't lie, it sort of made me sad, too. 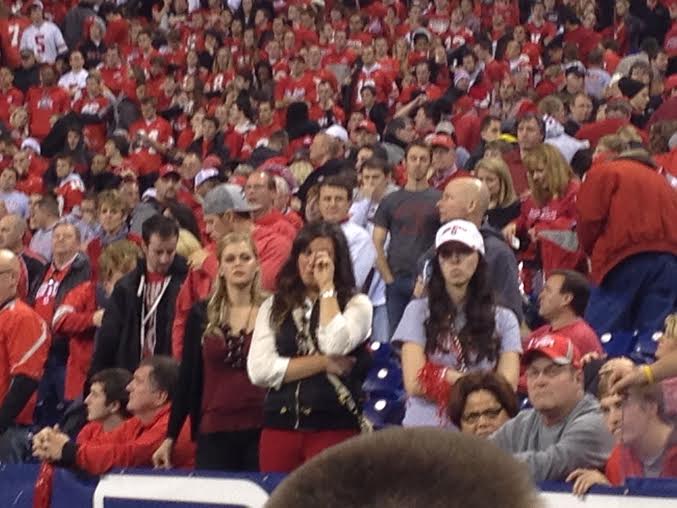 But weirdly, I wasn't sad that the Buckeyes lost. I admit to being a fan; but my brain wasn't processing the events in how they might pertain to my own enjoyment of this season, this team, and all surrounding narratives. I was sad because so many people around me were so visibly upset, my people, as it were. I didn't see many who were angry. This didn't appear to be a loss of the particularly gut wrenching variety. There was no fraud behind it, it didn't sneak up on anybody, and it couldn't be blamed on one single calamity. The collective mood was really one more of disappointment, not despair, but on the outside looking in, that just made me feel sadder for them. 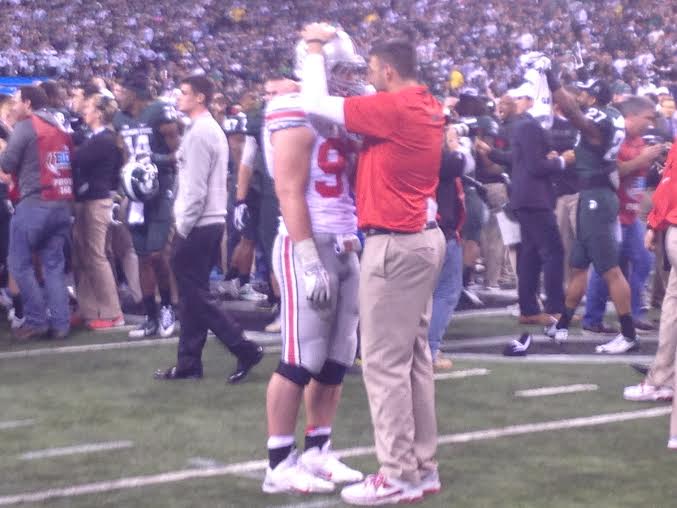 Urban's press conference did little to dispel that notion. I asked Urban about the team's woeful performance on third down (an uncharacteristic 1-for-10, which isn't nearly efficient enough to beat a good team), wanting to know what Michigan State did that befuddled the team so much. Urban looked primarily at the podium, and couldn't point to one specific instance, saying he'd need to go back and look at it. Many other football specific questions were answered similarly.  Yes, "we would have liked to get Carlos Hyde the ball more". Yes, "our defense needs to improve". No, "I can't recall the specific place where so and so screwed up, or how". Yes, "this loss hurts, but I love our kids", etc.

I had been warned by a few other writers that Meyer might snap at somebody, but the man I saw was not an angry man, at least not outwardly. He was disappointed, for himself, and for his players, players that he loved because they made an "uncommon commitment towards a common goal". Meyer said that "in terms of measuring the levels of hurt, I'm not sure I can do that", but it was clear to an observer that whatever level that was cut pretty deep.

"In terms of measuring the levels of hurt, I'm not sure I can do that" -Urban Meyer

Watching the conference, I couldn't help but feel bad for everybody answering the questions, for Meyer, for Braxton Miller, and for Ryan Shazier. Few of the rest of us would ever be called into a public accounting of how we messed up our jobs immediately after an emotionally draining failure. Few of us would be expected to answer those questions without the benefit of introspection and preparation.

To keep one's composure during that loss may be a part of the job description, but that doesn't make it easy. To walk by past Joey Bosa crying, or Urban holding his crestfallen family in this dark tunnel or sitting alone eating cold, stadium pizza, it's hard not to feel sad by association, fanhood or not. As one who is primarily "new media", you don't tend to get that close to those with that level of disappointment. We file our post, tweet a few GIFs, and change the channel. I'd like to think that if the results were flipped, and I was in that empty tunnel with the Spartans, I'd feel a similar reaction. That's a lonely, empty slab of concrete, and it's no place for anybody to crash.

But that crash had to happen sometime, and perhaps it's better now, although the indignity of being Tresselball'd will sting for a while. Despite Ohio State's impressive streak, it would be impossible to ignore the flaws from this team. The occasional over reliance on two skill players for offensive production. The sieve-like pass defense. The inability to step on the throat of a team and finish them off when you have the chance. If not against Michigan State, those flaws would fatally exert themselves sooner or later, likely against Florida State, in a game where the lights, and the scrutiny, would shine even brighter.

That game does not undo the accomplishments of this team, and there will still be one more shot at a high profile opponent this year to show that the team has taken steps to amend those flaws. But those accomplishments, at the moment, pale in comparison to that disappointment, that knowledge that somebody else has come out of that fire smelling like Roses.

In that huge, empty, concrete box, all that's left isn't anger. It's disappointment. For some, that might hurt even more. 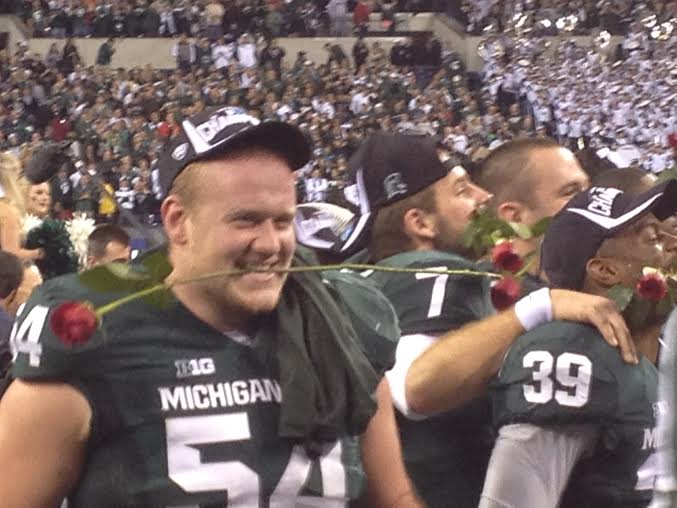