New here, eh? (And by here, we may or may not mean watching the sport of basketball). In order to crown a league champion, all of the conferences in the country other than the Ivy League hold post season basketball tournaments incorporating some (or most) of their teams in a single elimination format. The winner of this tournament clinches the Big Ten's automatic bid to the 2013 NCAA Tournament. The tournament takes place at the United Center in Chicago from March 14th-March 17th.

Which Big Ten teams are in the 2013 Big Ten Tournament?

All of them. From outright regular season league conference champions (THANKS, BELEINBAMA) Indiana right down to 12th seeded Penn State, all 12 members of the Big Ten's basketball, which most pundits hail as the best in all of the sport, will be present. Even second year relative newcomers Nebraska.

Well, television is ostensibly the premiere way to consume the games. All 11 of the tournament games will be aired on platforms ranging from ESPN to ESPN 2 to the Big Ten Network culminating on CBS Sports. The first three are obviously cable offerings (with the BTN being a premium cable offering in some regions), while the later is free to all television owners with an antennae. For those with a cable subscription but stuck in an office Thursday and Friday, BTN2Go will be available for the Big Ten contests subscribers of Bright House, Charter, Cox, DirecTV, Dish, Mediacom, Time Warner, Verizon, WOW!, and a few other regional cable entities. If you've got Comcast, it's not too late to order a Slingbox. ESPN and ESPN2 games will be available on WatchESPN, which is supported by a similar list or providers (though also includes Comcast). The CBS games might be multicast on CBSSports.com and in their app.

The Big Ten will also offer a an app called 'Big Ten Connect' for iOS and Android devices. It doesn't sound like it'll let you watch much of the action, but you'll be able to listen to radio broadcasts of all 11 games for just .99. Not too bad, considering most folks at work can't "watch" a ton anyways (and certainly a decent work around for Comcast subscribers).

So who's in this thing, when do they play, and where can I watch them? 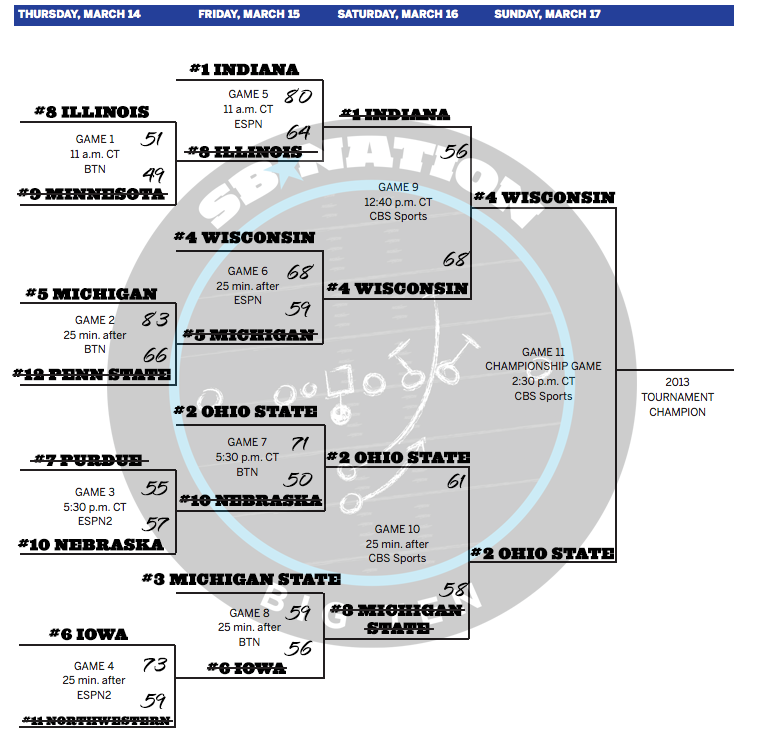