Action in Chicago at the Big Ten Tournament really heats up today with five teams in the Top 25 taking the floor in the Quarterfinals at the United Center.

The first day of play at the Big Ten Tournament had a little bit of everything in what was just a taste of the action that we'll get the rest of the weekend. The biggest surprise of day one was Nebraska beating Purdue 57-55, but other than that the seeding held true to form. The buzzer beater by Brandon Paul hopefully set the tone for the drama that will play out in Chicago the next three days. Here is the updated Big Ten Tournament bracket if you missed any of yesterday's action and info on how to watch/listen to today's games.

1) Indiana v. 8) Illinois - 12:00 PM EST - ESPN: Brandon Paul's buzzer beater on Thursday afternoon against Minnesota gave Illinois chance to try and defeat Indiana for the second time in just over a month. Tyler Griffey's game-winning layup with 0.9 seconds to go gave Indiana the upset win over then-No.1 Indiana in Champaign on February 7th. Illinois trailed Indiana 69-59 late in the 2nd half but D.J Richardson led the comeback to put Illinois in position to win. Richardson led the Fighting Illini with 23 points and Brandon Paul added 21 points.

In the opener of the 2013 Big Ten Tournament on Thursday, Illinois jumped out in front of Minnesota early, holding a 25-16 edge as the teams went into halftime. Minnesota overcame 19 turnovers to mount a comeback in the 2nd half and was ahead by three with under a minute to go in the game before a D.J. Richardson 3-pointer tied the score at 49. The final of Minnesota's 19 turnovers happened when Austin Hollins stepped on the sideline, giving the ball to Illinois with a chance to take the last shot. Brandon Paul was the only Illinois player to score in double figures, as he put in 25 points, none bigger than his jumper as time expired.

Indiana will come into today's game after having a few days to celebrate clinching their first outright Big Ten regular season championship in 20 years, after defeated Michigan 72-71 in Ann Arbor on Sunday. The Hoosiers will come into Friday's game having alternated losses and wins over their last four games. Cody Zeller and Victor Oladipo recovered against Michigan, both notching double-doubles in the victory, after poor performances led to a loss against Ohio State in Bloomington last Tuesday.

In their first matchup in Champaign last month, Indiana had Illinois where they wanted them for most of the game, controlling it for about 36 minutes. After watching yesterday's win against Minnesota, it is clear that Illinois is going to need more players to contribute than just Brandon Paul to be able to keep pace with the Hoosiers. D.J. Richardson and Tyler Griffey have shown they have the ability to score, and the Fighting Illini will need big games from them if they want to move on to play Saturday and play the winner of Michigan and Wisconsin. If Zeller, Oladipo, and the rest of the Hoosiers get out to a lead like they did in Champaign, it is hard to imagine that Illinois will have a second comeback up their sleeves.

4) Wisconsin v. 5) Michigan - 2:30 EST - ESPN: The second game of the Friday afternoon doubleheader will feature another rematch of teams that played in early February, and featured some late game drama. Wisconsin's Ben Brust sent the February 9th matchup in Madison into overtime with his half-court heave as regulation expired. Brust's 14 points was the high total for Wisconsin, who had a balanced attack with four players scoring at least 10 points. The Badgers played strong smart defense against the Wolverines, only letting Michigan attempt two free throws as they committed just eight fouls.

Michigan looked like they might have had a little bit of a hangover from the Indiana loss early, with Penn State jumping out to a early 14-3 lead on the Wolverines. Michigan immediately went on a 21-4 run to take the lead and held a 35-33 advantage at halftime. The Wolverines used a 18-3 run in the second half to pull away from Penn State and leave no doubt in the result for the last 10 minutes of the game. Jon Horford gave Michigan a surprise contribution with a season-high 11 points while Trey Burke led the Wolverines with 21 points. After committing 15 turnovers in the last meeting with Penn State, Michigan was a lot more careful with the basketball, giving it up to Penn State only five times.

Had Michigan not lost to Indiana in their regular season finale on Sunday, it would have been the Wolverines who would have earned a first round bye and Wisconsin who would have had to play Penn State. Wisconsin is coming into the Big Ten Tournament a little cold, having lost two of their last three. The Badgers lost to Purdue at home and Michigan State in East Lansing before ending the regular season with a win on a Traevon Jackson buzzer beater at Penn State. The Badgers have used a group effort on offense to earn 21 wins on the season. Jared Berggren, Ben Brust, and Ryan Evans all average at least 10 points a game for Wisconsin, while Sam Dekker usually comes off the bench is averaging 9.7 points per game. Wisconsin has held the majority of their opponents to less than 60 points in a game this year. The slow tempo and stingy defense that the Badgers employ makes tough to game-plan and execute against.

It will be interesting to see how Michigan responds to losing out on a first round bye while how Wisconsin responds to getting an extra day of rest. Sometimes it can be an advantage for the team without the bye to have a game under their belt, while the other team comes out cold and could fall into an early hole. Should Michigan come out firing early and get up by double-digits, it could be hard for Wisconsin to come back as they don't have really have much of a quick-strike offense. After last month's thrilling matchup in Madison most are expecting a close game that should come down to the last few minutes. 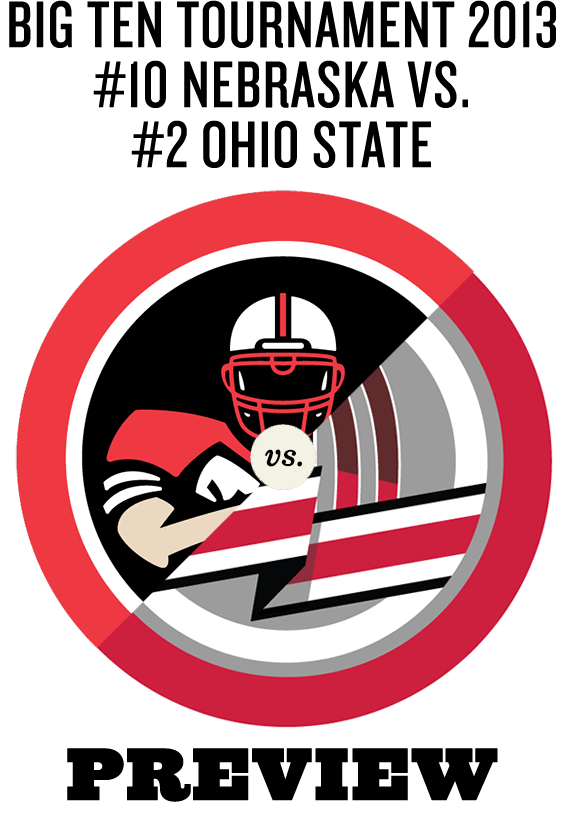 2) Ohio State v. 10) Nebraska - 6:30 PM EST - Big Ten Network: Our own Matt Brown has got you covered for your preview of tonight's Cornhuskers/Buckeyes game.

3) Michigan State v. 6) Iowa - 9:00 PM EST - Big Ten Network: Iowa started off their run to the Big Ten Tournament title and what is their last possible shot at a NCAA tourney bid with a 73-59 win over Northwestern in the nightcap in Chicago. Iowa pounded the glass, gaining a 48-31 advantage against Northwestern to lift themselves to a Friday night matchup against Michigan State. The Hawkeyes raced out to a 29-11 lead in the first half, and the Wildcats weren't able to close the gap within seven points the rest of the game. Devyn Marble's 19 points led the Hawkeyes and Melsahn Basabe had 10 points, 12 rebounds, and 5 blocks. Thursday night's win gave Iowa their seventh win in the last nine games.

These two teams met early in the Big Ten campaign, as Michigan State inched by Iowa 62-59 in Iowa City behind four free throws in the last 20 seconds by Keith Appling. Branden Dawson scored a then career-high 17 points, and his steal/dunk was what broke the tie to give Michigan State the lead for good. The Hawkeyes really missed Devyn Marble in the first matchup, and had he not been out due to a sprained ankle the result might have been different in January.

The Spartans closed the season with two straight wins after going through a stretch where they lost three in a row, with all those losses being to Top 20 teams. Even in their losses this season Michigan State keeps things close for the most part, with six of their seven losses being by less than 10 points. A key for Iowa if they have any designs on beating the Spartans will be to keep Adreian Payne in check, which is easier said than done. Over his last six games, Payne has been dominating for the Spartans, registering four double-doubles in those six games.

If Iowa has any designs on getting to the NCAA Tournament they are going to have earn it, with a big step being against Tom Izzo's squad on Friday night. The winner of this matchup will go on to face the winner of Nebraska/Ohio State. The Spartans should have a little bit of an edge on the glass with Payne, Dawson, and Derrick Nix all averaging over six rebounds per game. This game has the makings of playing out like the first one, with basketball that isn't particularly pretty to watch but is hard-fought up until the end. Iowa pulling the upset and moving on wouldn't be surprising but Michigan State's depth might be just a little too much for the Hawkeyes.