Ohio State opens the home baseball season with three games against Bryant this weekend. In a year with championships aspirations and expectations, the Buckeyes hope wins lead to more fans in the stands.

Fifth-year seniors Joe Ciamacco, Ryan Cypret and David Fathalikhani were high school freshmen in the spring of 2005, four years away from being members of the Ohio State program. In a season in which each would redshirt, Ohio State went 42-19, capturing its first Big Ten championship since 2001 and ending the season as runners up of the Tallahassee Regional. During a banner year for the Buckeyes, Ohio State played in front of 1768 fans on average.

The 37,133 total fans that combined to enter Bill Davis Stadium over 21 contests ranked 35th in the nation in average attendance, ahead of such powers as Louisville, Oklahoma, Stanford and Virginia. A statistic to crow about, but the 35rdranking was well below the program's high water mark when the Buckeye averaged the nation's 23rd best crowd with 2570 during the 2005 season.

Ever since that 2005 season though, Ohio State has seen a decrease in its national ranking of home attendance with fewer and few fans entering the gates to see the Buckeyes play in person each year:

The 2012 season saw the bottom drop out when the program averaged a home attendance of 1177. A 55% decrease from the 2005 season, even that number is inflated by a season-ending game against Toledo where an attendance of 3764 was recorded, thanks in large part to Columbus Public Schools day, where thousands upon thousands of elementary students got to take in the baseball game in order to promote physical fitness. Ohio State averaged 1069 fans in the 24 other contests, failing to eclipse 2000 in any one game, a once staple of every Ohio State home contest.

There is not a positive relationship between attendance and performance. While Ohio State did play in the NCAA Tournament in 2007, they did so by claiming the Big Ten Tournament championship after finishing sixth in the Big Ten at 15-15, 38-24 overall. Compared to 2009 season, a year when Ohio State was ranked from the third weekend on, there was not an increase in the fans that came out to support the program.

But there are two factors that Ohio State head coach Greg Beals feels comes in play when wanting to turn the course of Ohio State's support:

"Part of it is that athletic department had just built the stadium," said Beals on Bill Davis Stadium, which is now in its 17th season of being the home of the Buckeyes. "There was a mentality of ‘ok, we built this place, now we need to do something to promote it'."

"The other thing, in the process of raising money for the stadium, Coach Bob Todd grinded and generated a lot of interest around the program. Now that I'm in year three, that my wings have spread out further, I can help with that process, know who to talk to, what buttons to push." 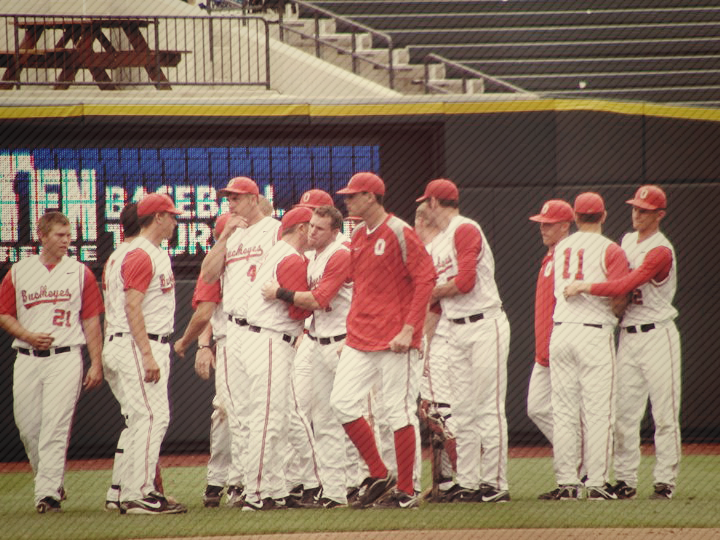 During the offseason, Beals took steps to facilitate the growth of the program and increase promotion of the team. One of targeted areas was student participation. The baseball program and the Ohio State student organization, Block O, formed a closer relationship, one that hopes to see a rejuvenated student section, the Buckeye Sluggers, as they now sit closer to the action.

"We have the students moved in the stadium to where they can have a little more impact on the game," said Beals as Ohio State opens the season 263-130, a .670 winning percentage all-time at Bill Davis Stadium.

"It wasn't too long ago we did that at the Schott and we've been awfully darn good playing at home since that happened. You want to create an environment, an air, where teams play in your place and you have a home field advantage."

Senior captain Brett McKinney echoed the sentiments of his coach that student support can impact the game, loving the energy the students bring.

"In baseball where we play 56 games, every once and a while you have the game where you're down, the energy may not be there. But when you have students there, fans there going crazy it amps us up, gets us going."

"After meeting with Block O, I think they're going to do great things for us." -RHP Brett McKinney

"After meeting with Block O, I think they're going to do great things for us."

Ohio State entered the season with not only expectations of competing for a Big Ten championship, but to reach the NCAA Tournament and to host a regional in the process. Taking care of business at home will go a long way towards Ohio State reaching those goals.

While Bryant may not be a household program, Beals said he told his team they're a good club that will pitch, make the series competitive and win their conference. With conference play beginning next week, the Big Ten is off to a rousing start with Indiana nationally ranked and Illinois coming off a weekend road sweep of Baylor. Both of those clubs, as well as Michigan State, a participant in the 2012 NCAA Tournament, travel to Columbus in Big Ten play.Penn State visits as well.

Before Ohio State ends the regular season against the No. 24 Hoosiers, May 16-18, the Buckeyes will battle No. 9 Georgia Tech at Nick Swisher Field May 7-8, host No. 16 Oregon May 10-12 and take on No. 4 Louisville May 14. The nine-game run is as daunting as any in the country this season.

"That stretch at the end of the season, if we want out program to be where we want it to be, we need to be able to play those people," said Beals. "How could you not like those opportunities to play at home?"

The Buckeyes will have the opportunities to show the program that played in two Super Regionals, 1999 and 2003, is back to being a contender on the national stage, 10 years after falling a game short of reaching the College World Series.

And when they do so, Beals hopes his program has the support that follows the basketball and football programs.