Before Ohio State takes on Wisconsin for the 2013 Big Ten Tournament title, let's look one last time at where some of the most reliable bracketologists see the Buckeyes going.

Though it'll all be rendered fairly moot in just over four and a half hours from now, inquiring minds are still curious where Ohio State might be headed in the 2013 NCAA Tournament. The Buckeyes have won seven straight and enter this afternoon's rubber match against the Wisconsin Badgers as slight favorites to win their third conference tournament title in four years.

More: See where Ohio State's headed in the 2013 NCAA Tournament

And while there's no questioning the caliber of the job Thad Matta's done (which even going back to February was a much under appreciated effort), the question, win or lose, for Ohio State basketball fans becomes, "what comes next?" While we'll all undoubtedly be spending the better part of Sunday evening (and in some cases Monday at our desks) trying to forecast who'll beat whom in an effort to overcome what could be arguably the most favorite-mascot-bracket conducive draw in years, we're all still morbidly curious right now what Ohio State's road to another Sweet 16 (or in a dream scenario, Final Four) could look like.

In order from historical accuracy/precision, here are how some of the top experts at forecasting NCAA brackets see Ohio State's path, pretty much win or lose this afternoon, shaking out:

Eric Prisbell The long time Washington Post writer is no longer doing a bracket of his own (he was consistently the most accurate around the Internet), but has been insinuating (both in his own writing and to other outlets) that the Gonzaga Bulldog's strength of schedule (which would be the worst for a one seed in 15 years) could very well keep them out of the one line. He likes the Indiana Hoosiers, Louisville Cardinals, Kansas Jayhawks, and Duke Blue Devils ostensibly. He has Ohio State as the second highest seeded team in the Big Ten, but hasn't disclosed in any of his most recent work whether that has them on the two or three line.

Patrick Stevens The once and former Washington Times scribe (and the second most accurate bracketologist in our exercise) is now contributing his wisdom for USA Today. Fortunately for us, he's still making bracket projections. Here's how he sees Ohio State's region shaping up:

The third most historically reliable, Busting the Bracket, won't unveil their final projection until 5 p.m. EDT today. Before the conference tournaments, they had Ohio State as a four. A safe bet would be them having OSU moving up to the three line, win or loss, as well. 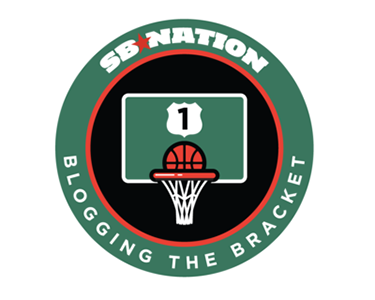 SBN's entry into the mix, Blogging the Bracket, is our fourth best year over year. Their latest is as follows: 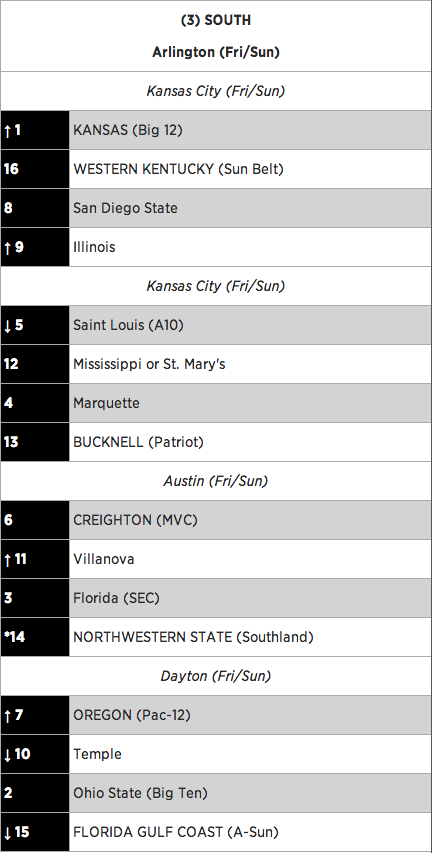 Chris Dobbertean is the first of our experts to have Ohio State officially moved up to the two line, which Thad Matta said in his post game press conference yesterday he'd hoped Ohio State had earned. Finding the team in the same general vicinity as the Florida Gators is a bit more on the discomforting side, however.

The drop off from slots four to five in accuracy is tangible, but Jerry Palm's long been highly regard for his expert work on forecasting the BCS standings. His NCAA bracket projections aren't too shabby either. Here's how he projects Ohio State's draw: 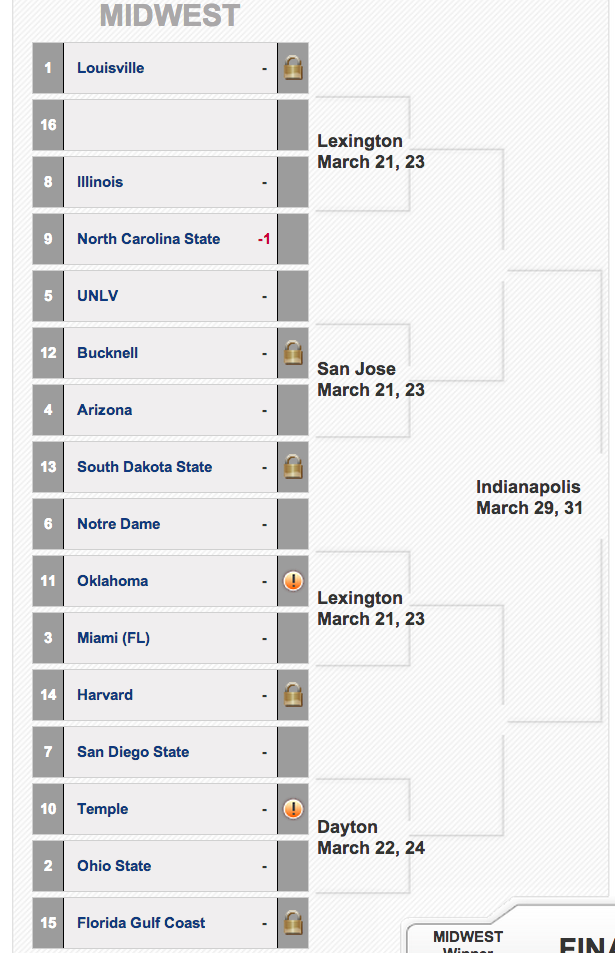 Add Palm to the list that see Ohio State as two worthy. The potential rematch with Kansas isn't a good matchup for the Buckeyes, but the Miami Hurricanes don't solicit a ton of fear (though are still certainly dangerous).

UPDATE (2:36 p.m. EDT): Palm now has Ohio State in the Midwest bracket with Louisville the #1 (and the #1 overall for the entire tournament). The 3 would still be the dangerous Miami Hurricanes.

TWWL's Joe Lunardi is generally treated as the foremost authoritative expert on the subject, but he places as our least reliable of the five experts we're sampling today. Still, missing just a handful of teams in in as long as he's done these projections isn't without merit. Getting those teams in the right seeds, on the other hand, is a bit more of a chore.

Take the following projections with the according grain of salt. We're guessing ESPN is saving their most up to date projections for just before the unveiling for maximum #humblebrag'age as Sportscenter last night/this morning said Lunardi had Kansas on the one line but these current projections do not. Here's where Lunardi (at least of yesterday before last night's Big XII Championship Game) saw the Buckeyes going:

UPDATE (2:00 p.m. EDT): As mentioned, what we were seeing even a half ago didn't match what SportsCenter had been reporting for the better part of 14 hours. Lunardi has now updated his bracketology and has Ohio State moved up into the Midwest region. This would mean an easy travel path for Ohio State basketball fans as the Bucks would start in Dayton and potentially move on to Indianapolis prior to heading to Atlanta: 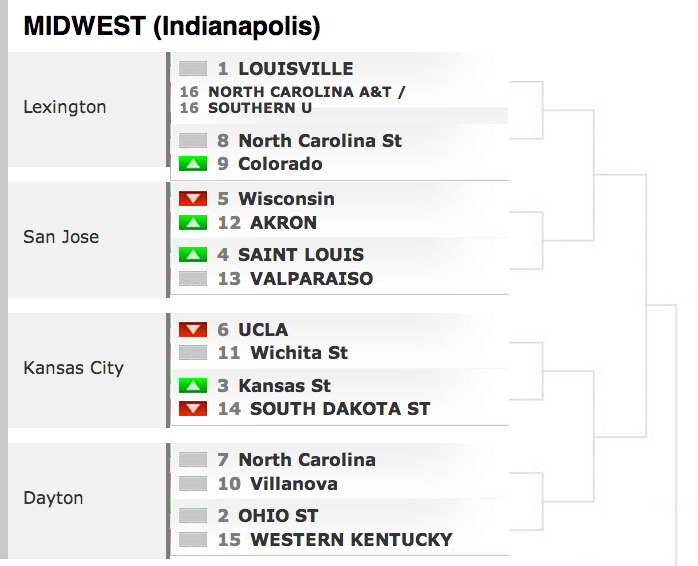 Some have called this a favorable draw for the Buckeyes, but Colorado, Syracuse, UNLV, Saint Louis, and Gonzaga are all potentially problematic for Ohio State. I know the superficial gut instinct is to think getting Gonzaga as a one is a good thing, but we saw how close the Zags played Ohio State last March without Kelly Olynyk (and with the Buckeyes having Jared Sullinger). Given how the Bucks fared against Jeff Withey and Ryan Kelly, it's hard to see the positives with the likes of Amir Williams and Evan Ravenel potentially having to try and slow down the potential Naismith finalist.

UPDATE (2:00 p.m. EDT): This new draw actually might be as favorable as those who haven't watched as much college basketball in 2012-2013 seem to think the previous projection was. North Carolina is peaking at just the right time, but is still rather green and uneven overall. Villanova is super streaky, and Kansas State is a super mortal three seed. UCLA sans Jordan Adams could be a second or third round out. Saint Louis remains dangerous and we know all we need to know about Wisconsin. Louisville could be a brutal hypothetical Elite Eight matchup, but is probably a better draw for the Bucks than a Duke or Kansas rematch.

While small sample size, etc., our pool of experts have the Buckeyes on the two line. A win over Wisconsin certainly wouldn't hurt that cause, but it'll be interesting to see how things unfold tonight at 6 p.m. EDT on CBS (channel 1010 HD/10 SD on Time Warner Columbus/Delaware).

UPDATE (6:33 p.m. EDT) The brackets have been finalized. See where Ohio State's going in the 2013 NCAA Tournament.