NCAA Tournament 2013: How to follow Ohio State through March Madness

With the 2013 NCAA Tournament bracket set, the question now shifts to, "how you can follow the Buckeyes as they go for a second consecutive Final Four appearance (or maybe more)" The Buckeyes will have to go through two other cities before setting their sights on Atlanta. Here's how to get to where you need to go.

After over six months of great wins, crushing losses, and a championship run through the Big Ten Tournament, we now look forward to the field of 68, and what path the Big Ten Tournament Champion Buckeyes will have to take in order to get to their second consecutive Final Four, the third under Head Coach Thad Matta.

More: A complete guide to Ohio State's region, The West

The NCAA Tournament is always a fun experience for every team invited, but seeing the games live is a whole other animal itself. With teams from all over the country all gathered in one building, Buckeye fans will join up with fans of multiple other teams to watch the most fun, intense sets of games of the year. Put bluntly, this is the reason you save up on your vacation time, you guys. And now is the time to cash it all in and follow the Buckeyes on what we all hope is another fun ride through the NCAA tournament.

It all starts close to home, as the Buckeyes will play their First Round Second Round games in Dayton, Ohio. Dayton has been the host site for the "First Four" games since the field expanded, and is, luckily, a very easy commute for Buckeyes fans. Just jump on Interstate-70 East and in a little over an hour, you're there. Here are your directions to Dayton.

Dayton is close enough to Columbus such that you don't have to stay there and can commute to and fro Columbus, but it's a college town, so there's plenty of places to stay if you're so inclined. And if you're between games and looking for something to do, there's plenty in the area, including the National Museum of the Air Force, which is basically the Smithsonian Air and Space Museum Light. A good way to blow some time between tip offs.

The Opening Rounds are fun, and the Final Four is an experience, but for my money, the Regional Final games are the best the three weeks of games have to offer. Usually all the first and second round Cinderellas have had their coaches turned to pumpkins, and the games are almost always competitive and between powerhouse schools. And if you win two games in the second weekend, you get to cut down nets and get ready to hang a banner when you get home.

For the Buckeyes, if they can get through their opening round games, they will play out West for a regional championship. The good thing about the region is that they will start out in Dayton, an easy commute for fans from Columbus. The bad thing? Getting to the left coast ain't easy. Or cheap: 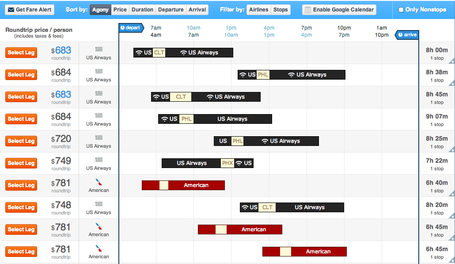 Let's face it, it's tough to get to LA, but if you can get out there, you're in Hollywood, man. Have fun and then watch some basketball and go to the beach.

If Ohio State wins their first four games, they will find themselves in another Final Four. Luckily, Buckeyes fans should already be fairly familiar with Atlanta, as it was the site of the 2007 Final Four, which saw the Buckeyes advance all the way to the Championship game (cough and then lose to Florida cough).

Atlanta is a great town for a Final Four, and is incredibly accesible from Columbus, with Delta and AirTran offering a number of flights to get you to the ATL in time for Saturday's National Semifinal game. Here's a look at how Hipmunk says to get to Atlanta in time for the Final Four:

It's a bit expensive round trip, but these are non-stop flights, and can you really put a cost on seeing the Buckeyes live in this situation?

On the off chance you can put a price on that, you can also opt to drive down South. Despite the eight hour commute, it's a fairly straight shot down to Georgia once you get through Cincinnati. Let the Googles take you there:

I'm a Yankee by birth, so I won't even give any suggestions for what to do in the ATL. Plus, it's the Final Four, and Atlanta throws a surprisingly good basketball party, and did so back in 2007. If the Buckeyes get that far, and you go with them, drink it all in; it doesn't happen that often, and when it does, it is worth remembering.

There's nothing like the NCAA Tournament. And there's nothing like watching your team beat the best of the best in the country. The road to the Final Four won't be easy for the Buckeyes, but following them is as easy as a jumping in your car or hopping on a plane.