How to sports proof your dog's name

Share All sharing options for: How to sports proof your dog's name

In 2007, my then-girlfriend, now-wife Chelsea and I adopted a nine-month old German Shepherd Mix from a local animal shelter. Despite being young and energetic, the dog had an regal quality that immediately attracted us to him. We also noticed his unique coloring pattern: black on his back and gray on his chest and arms; he almost appeared to be wearing a gray jacket or vest. We took him home to our apartment, gave him a brand-new Ohio State collar, and celebrated an important milestone in our relationship. (Gentlemen: if you and your girlfriend get a dog together, you might as well commence ring shopping; game over.)

There was one thing left to be done: name the dog. Because he had been brought to shelter anonymously, the shelter had been forced to give him a name. They had donned him "Sparky," which we found to be somewhat trite and unbecoming of a dog of his stature and appearance. We spent two days trying to decide on a name for our new dog.

It must be remembered that this was November of 2007. The Buckeyes were just coming off of a 14-3 win in Ann Arbor, and suddenly had hopes of a National Championship appearance despite a heartbreaking loss to Illinois the week before. Jim Tressel had once again beaten Michigan and further endeared himself to Ohio State faithful. Things were pretty good.

So, despite some initial resistance from Chelsea, we named our dog Tressel. Although it took the dog a few weeks to become accustomed to his name, I immediately knew that we had found the right name for him. I also thought that Tressel's name was unique and that my decision was bold; I figured that nobody else would dare to christen their dog with the last-name of a current coach. Upon visiting the veterinarian for the first time, however, I was surprised to learn that there were two other "Tressels" – one Chihuahua and one Dalmatian – who frequented that office. Despite being a bit disappointed in the apparent lack of novelty in my dog's name, I was still proud to call him Tressel. My willingness to name my dog after a Buckeye icon proved my devotion to the team, I thought. I was joining a small fraternity of fans crazy enough to name a family dog after a football coach.

Of course, we grew to love Tressel (the dog). He ran beside us on jogs, joined us on vacations, and was there to greet us after we returned home from our wedding in 2009. Tressel became a veritable member of the Humphries household. 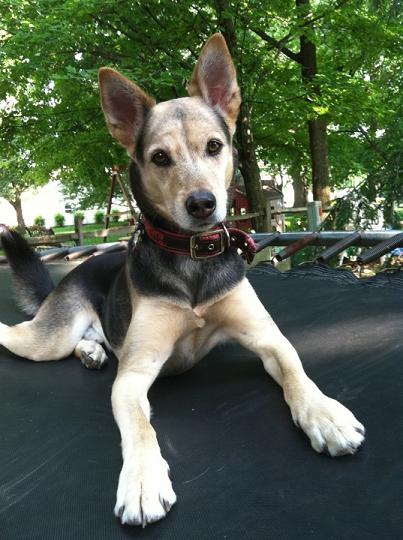 And then, in March 2011, Ohio State revealed that Jim Tressel lied about his knowledge of the tattoo-for-memorabilia scandal. A few months later, Tressel resigned. After news of Tressel’s resignation became public, the first question I received from nearly all of my friends was a half-sarcastic "are you going to rename your dog?"

I had branded my dog with the name of a former coach who had left the team on less-than-favorable terms. Personally, I didn’t really mind: for me Jim Tressel remains a great coach upon whom I look with admiration and respect. But I thought about the other pet owners who named their dog "Tressel" and I wondered if they shared my sentiment. I also thought about other sports fans who have named their dogs after sports figures that have later proven less than perfect. I began to realize the risks inherent in branding a dog with a sports-related name. Naming your dog is not quite as important as naming your child, but the name is something that both you and the dog will have the endure for the rest of the dog’s life. It takes some careful consideration.

So, in that light, here’s a list, in descending order of potential for regret, of types of sports-themed dog names:

The name "Tressel" is obviously part of this first category, which involves the highest degree of dog-naming risk. In this category, there is no possibility of disassociating your dog from the person for whom he or she was named. And, because the namesake is still living and in the public eye, there is no way of knowing if you might later regret that naming. Say, for some strange reason, you named your dog "Artest." Does he later become "World Peace."? And how do you correct him? "Bad World Peace!"?

I’ll give you another example. In October of last year, my friend, (we’ll call him "Joe") adopted a dog and named it "Te’o," only to find out a few months later that his dog’s namesake had carried on an online relationship with, and mourned the fake-death of, a man pretending to be a woman named Lennay. Here's the conversation Joe had with his wife upon learning of the Te'o scandal: 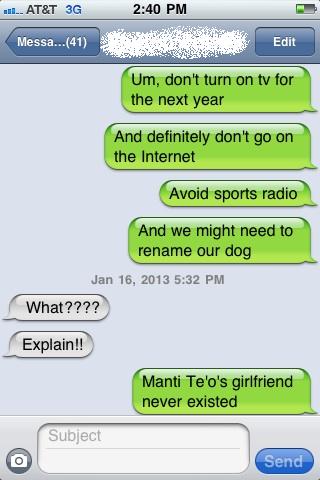 Joe’s dog is stuck with the Lennay Kekua connotation – Joe’s friends pester him about changing the dog’s name and ask whether the dog is prone to fits of air-humping. Outside of adopting another dog and ironically naming it "Lennay," (which is an awesome idea, by the way) there’s really no recovering from this unfortunate naming. Joe’s dog, which Joe loves dearly, will forever be named after a football player who loved a fake woman. Maybe Joe should have opted for "Holtz" instead, though that would only have worked if the dog was prone to excessive slobbering.

The "Te’o" example is illustrative of the fact that every current sports figure – even the most seemingly Boy-Scoutish – is human, and is therefore subject to public ridicule, embarrassment, or worse. Say, for instance, you’d named your dog "Joepa" before the Jerry Sandusky scandal became public knowledge. You think you have made a relatively-risk free decision by naming your dog after a beloved coach whose legacy was seemingly already emblazoned in the annals of Penn State Football. And then he, the coach, is implicated in the cover-up of a despicable scandal like Sandusky's. Your poor dog. I’m in school at Duke right now, and have developed a liking for Duke Basketball, but I’m not going to name my dog "Krzyzewski," or "K." Just in case.

With iconic figures like Joe Pa and Coach K, it’s better to wait until they have passed – and probably a few decades after that too. Time allows the names of such figures to move into Category Two, which includes the names of icons whose legacy has already been fully written, and about which any further negative information is unlikely to materialize. For example, I have a friend who named his dog "Woody," after Woody Hayes. Other than the occasional anecdote about turtles, nothing new, and certainly nothing negative, is likely to be learned about Woody Hayes, or any other figure in Category Two.

I have another friend from Cleveland (we’ll call him "Jim") who named his dog "King," after LeBron James ("King James"). This was during the height of Cleveland’s love affair with LeBron James – when you couldn’t walk down a street without seeing a few LeBron jerseys (which had not yet been burned in effigy). Obviously all that ended abruptly with "The Decision." But, despite LeBron’s sudden departure from Cleveland, "King" still lives there and remains so-named. As opposed to Joe and I, Jim made a somewhat-fortuitous choice when he opted to use a nickname for his dog, rather than an actual surname. "King" is arguably an appropriate dog’s name separable from the sports figure from which the name was derived. So Jim does not need to be anxious when he calls his dog’s name at the park or checks it in at the vet. But Jim will always know that the talents of his dog’s namesake are currently residing in South Beach. That’s the problem with this Category Three names: you’ll always know.

As far as I can tell, there are only a few names that really fit in this category, and they are all animal names. Bear Bryant’s name, for example, would work here (but could also be put into Category Two). The best example is Tiger Woods’s name. If, prior to that fateful Thanksgiving night in 2009, you loved Tiger Woods so much that you named your dog after him, then you got really lucky because "Tiger" is a totally-OK dog name that won’t be immediately attributed to the golfer. This is a limited category of very little potential use-value.

So what’s the takeaway? If you want to give your dog a sports-related name, name it after something or someone that isn’t going to let you down – give it a name from Category Five. Examples of such names include "Brutus" and "Buckeye." A few years after adopting Tressel, Chelsea and I adopted another dog, which we named "Scarlet." "Scarlet" is a perfect example of a Category Five name; no matter which coach is at the helm or which players are on the field, I’ll always be proud of the scarlet and gray.

The dog-naming phenomenon is symptomatic of the ever-increasing over-idolization of athletes and coaches in American culture. I’m guilty of it, Joe and Jim are guilty of it, and the many others who named their dogs after sports figures are guilty of it too. But even those of you whose dogs have normal names, or those of you who don’t even have a dog, are likely a little-bit guilty as well. You’ve probably written a pandering or disparaging message to an athlete on Twitter, or spent hours in line waiting for an autograph, or put a giant "Fathead" poster of a player on the wall in your basement. Let’s all keep in mind that sports figures are humans like us. And, as such, they are prone to making the same mistakes that we sometimes make. Like telling a lie, or making a questionable "decision," or naming a dog Tressel.