Straight out of Urban Meyer's playbook at Florida, Heisman hopeful quarterback Braxton Miller is listed with a 40-time that seems too good to be true – and probably is.

Famed quarterback guru George Whitfield (former Massillon Tiger and quarterback for Jim Tressel at Youngstown State), the same expert that worked with Braxton Miller this past winter and was then seen last month working out Michigan quarterback Devin Gardner, is in town visiting the Buckeyes. Amongst the early highlights of his trip to Columbus are an almost unrivaled behind the scenes glimpse into the Woody Hayes Athletic Center.

As Whitfield makes the rounds, he's photographing basically anything and everything of interest to you and him alike. First there's the Michael Jordan motivational quote you can't help but acknowledge before you make your way into the complex. Then there's the academic progress rate poster, sure to pluck the heartstrings of every parent who tags along for an unofficial or official visit. And while nothing new to us, there's the matter of fact that the coaches go well out of there way to never to call a certain school or state by its proper name. Then there's the warning of what's to come should you make it to the next level then promptly fail to measure up strength & conditioning wise. And similar as before motivational fare you see while you're lifting at the facilities.

But then, last but certainly not least, comes the part sure to dominate Ohio State, Michigan, and SEC message boards and comment sections alike for the better part of the remainder of the week:

Of course those times (and those achievements) are more for motivational/internal bragging right purposes than anything actually serious. And while Braxton Miller is most assuredly otherworldly fast, is he actually 4.32 40-yard dash fast? Perhaps if hand timed on a wind aided fast track.

All joking aside, this is nothing new for Urban Meyer and Mick Marotti. The following adorned Florida's facilities during Meyer's tenure: 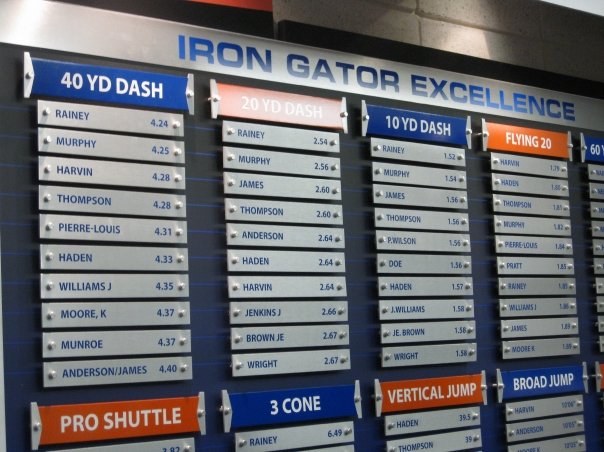 So while we hate to rain on everyone's parade, Braxton Miller is fast, but he probably isn't *that* fast. Of course when opposing defenders are left in the dust, those tenths of a second seem awfully arbitrary, don't they?