In 2010, Ohio State went to the Rose Bowl for the first time in the Tressel era – and Terrelle Pryor did magical things! 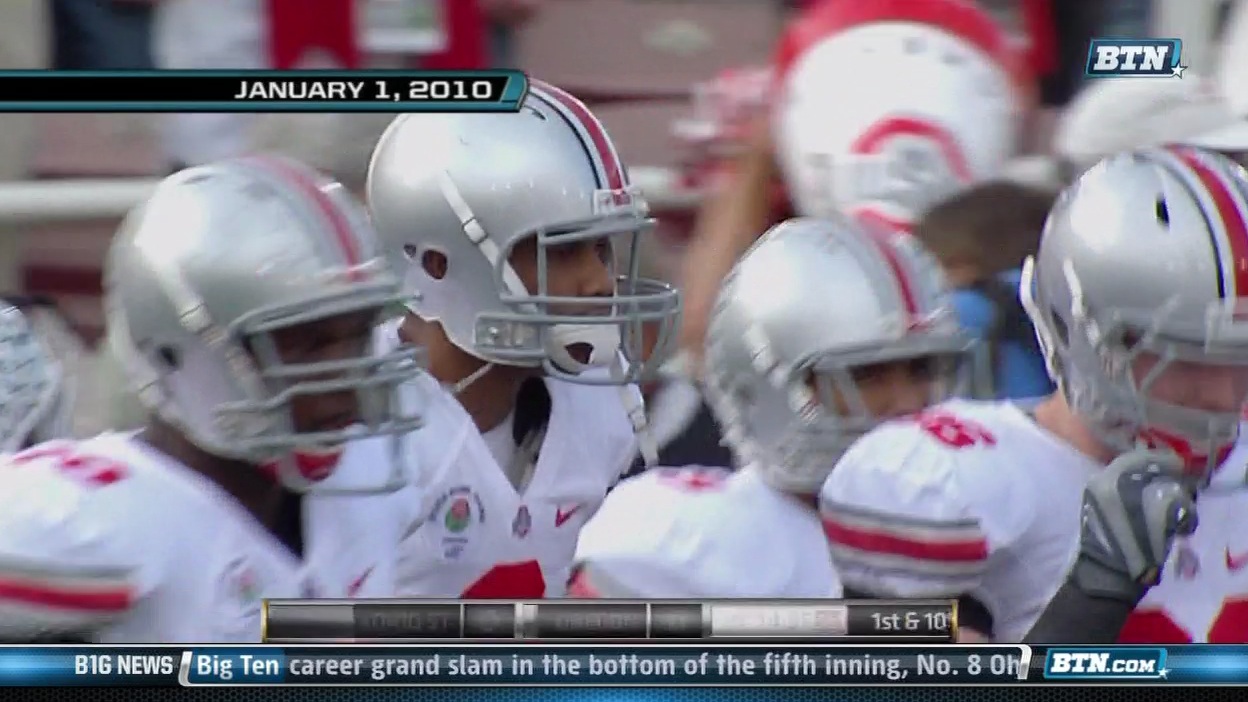 Following Boom Herron's kick return, Brent says, "Young Pryor will take over at the 25 yard line," as if "Young Pryor" is Terrelle's rap alias or something. The next time OSU took the field, I half expected Brent to introduce Pryor as the "Son of Jeezy, brother of Joc, and father of Dro." Rap game Brent Musberger, everybody! 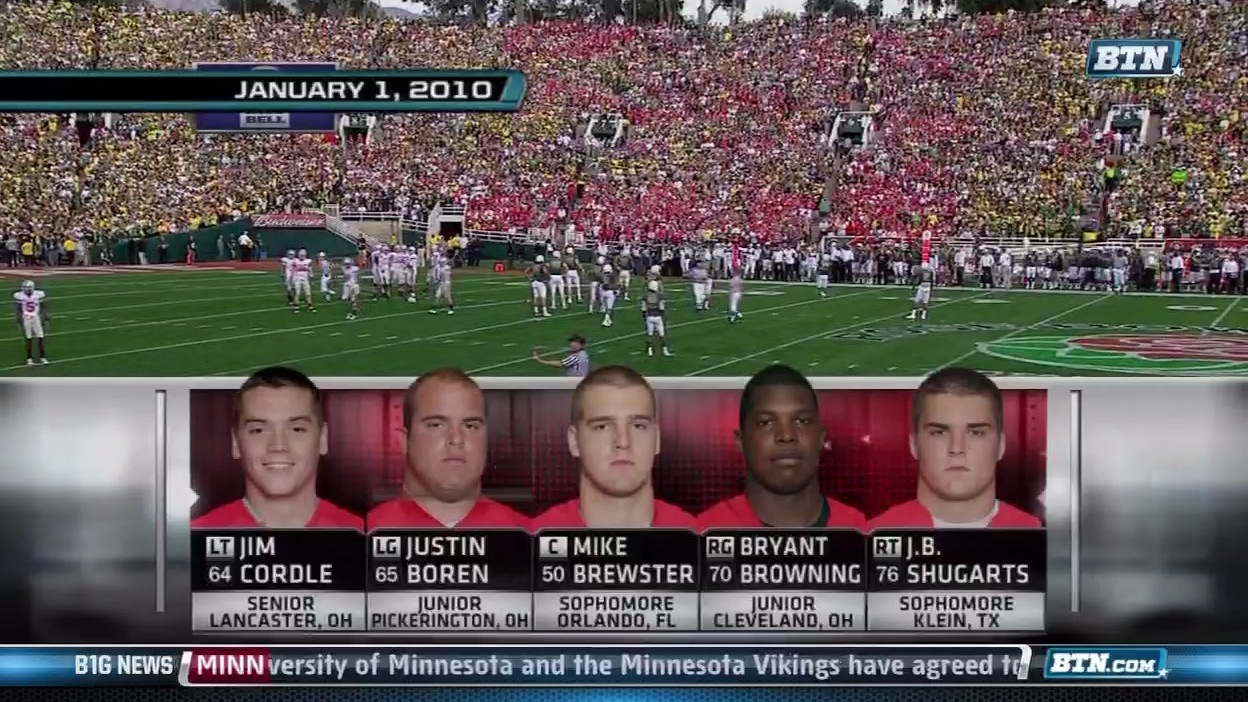 THIS is what Braxton Miller needs to do more often. For whatever reason, he always seems extremely hesitant to scramble, as if he must prove to the world (i.e., Mark May) that he's not a run-first QB. Like, Braxton, you're playing against Purdue and Indiana and Illinois - defenses that would legitimately struggle to beat a team of tow-toed sloths in a relay race - so don't be afraid to use those legs! 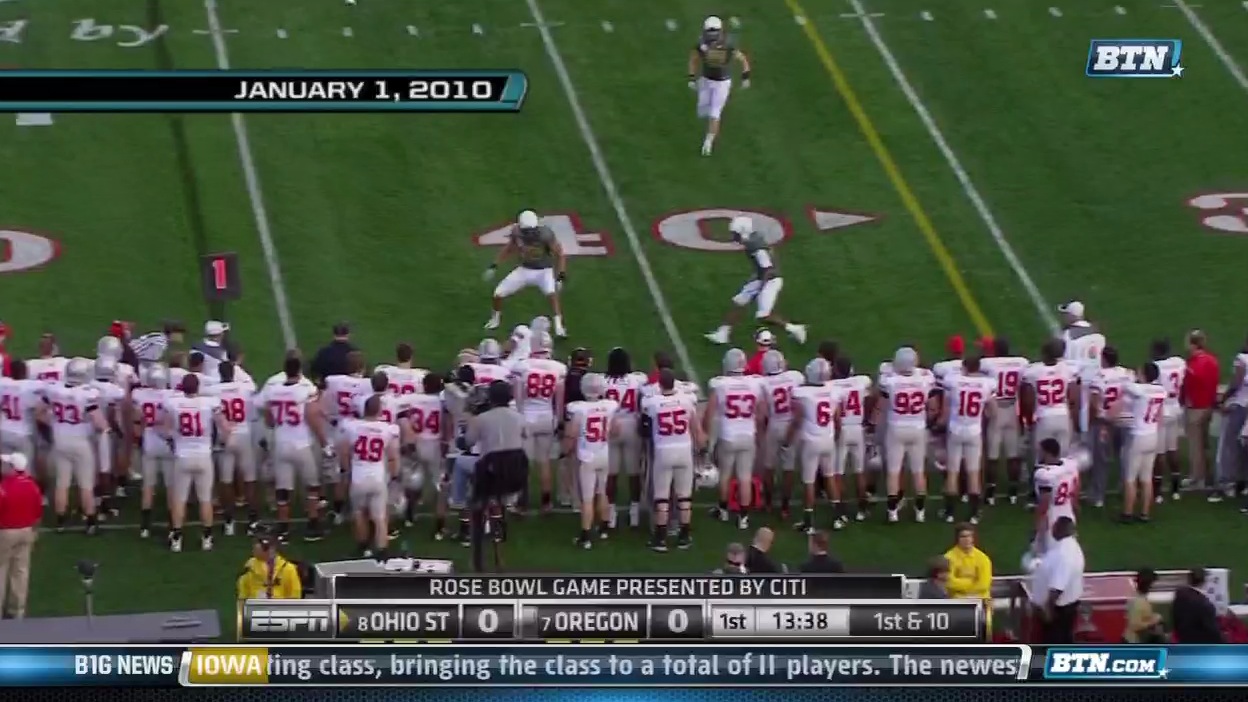 Brent explains that DeVier Posey will figure prominently into this game because "Ray Small, the senior, is not here" due to "a violation of team rules," and Duron Carter, "a fine prospect (ed.: LOL!), is not here because of academics." Uh, what are the most oft-repeated sentences in OSU football history, Alex?

Now there's a microcosm of DeVier Posey's college career if ever I've seen one. SO CLOSE, yet so far.

Are wheel routes the most under-utilized pass pattern in football? Of course they are, and it's not even close. Brandon Saine on a DEFENSIVE END is a matchup I'm taking every day of the week and 47 times on Sunday. 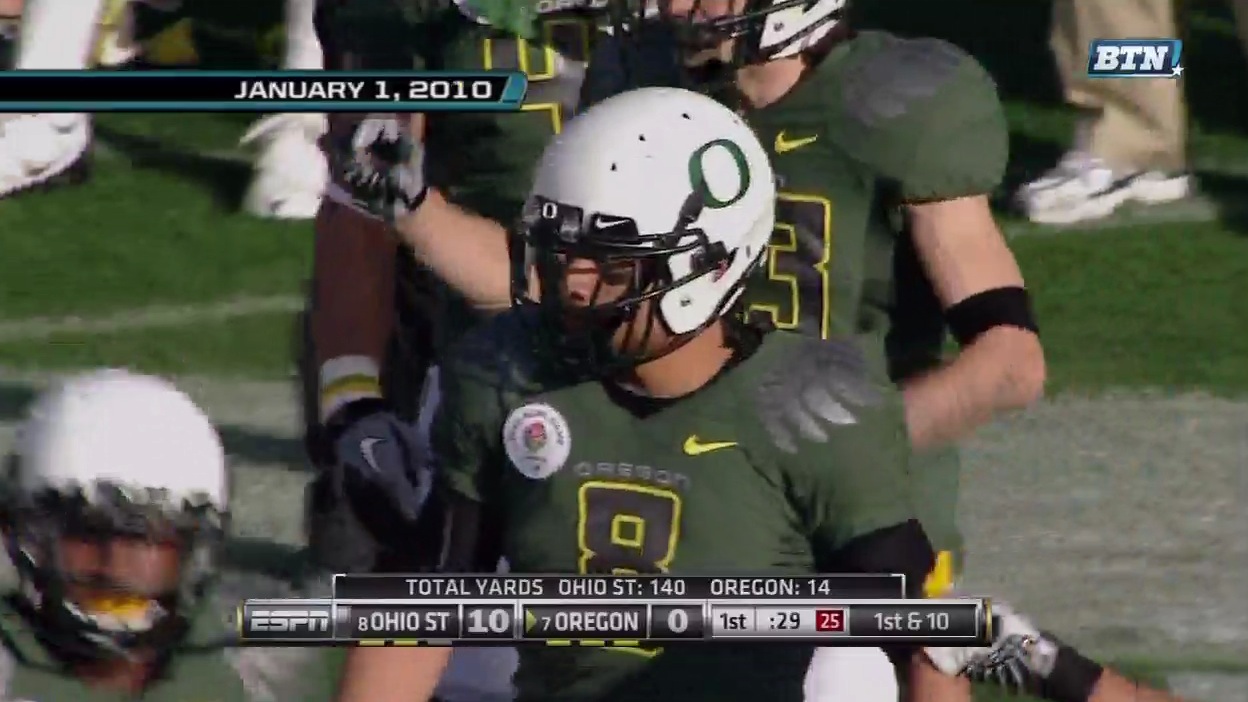 1/1/2010: Kirk Herbstreit posits that Oregon will "maintain their poise" in this Rose Bowl because of "the fact that they have a leader like Jeremiah Masoli."

Is this (a) Jim Tressel hopelessly lobbying for an obvious catch to be ruled incomplete, or (b) Jim Tressel entreating an official to join him in a family-friendly routine of the Cha-Cha Slide?

Kurt Coleman is a real pro at getting trucked-up. 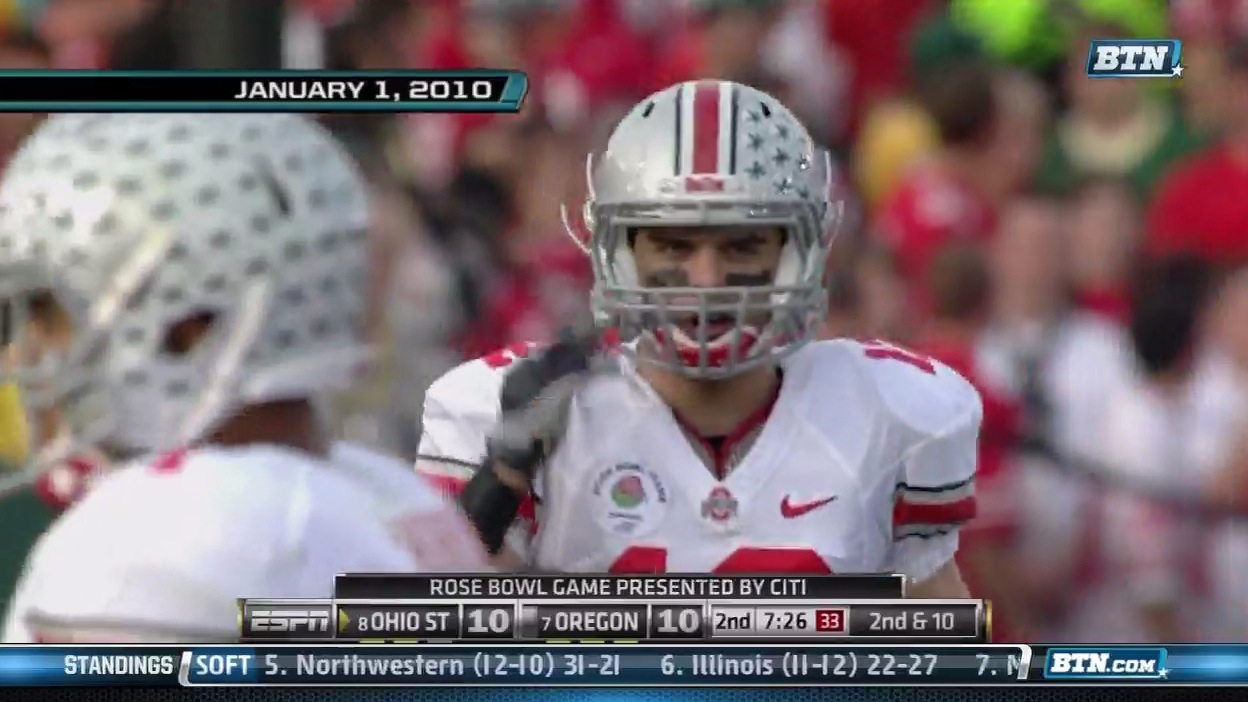 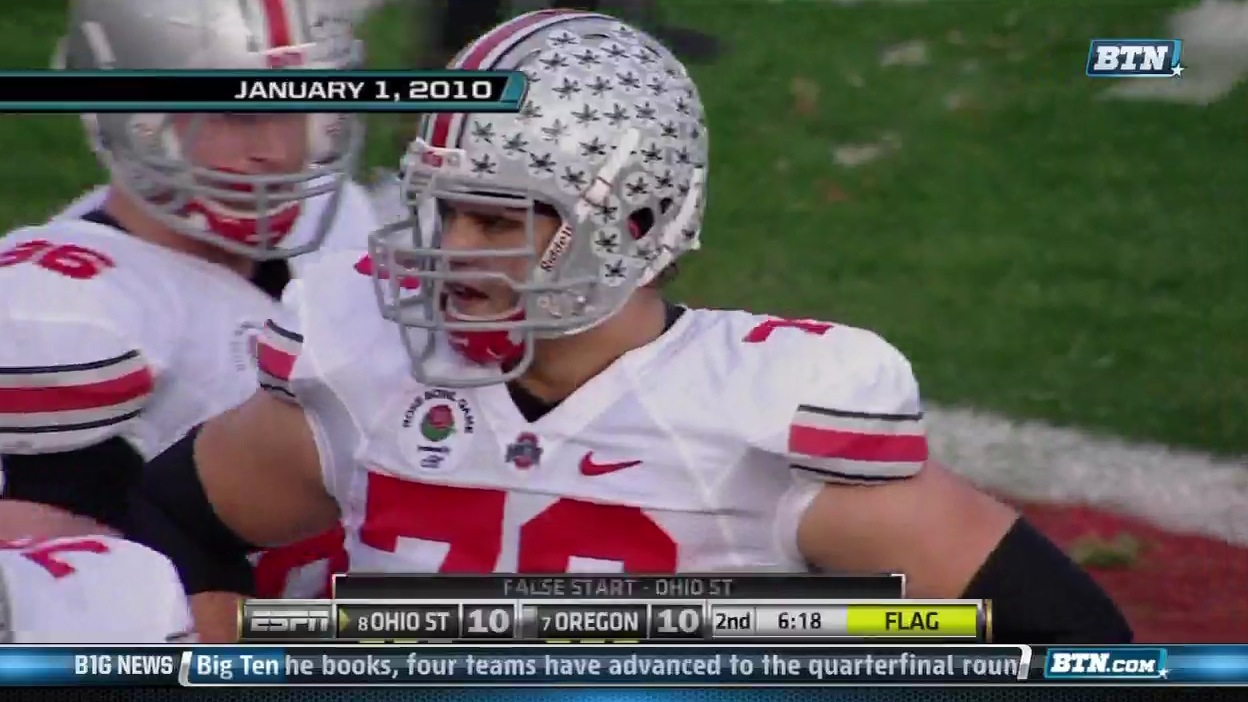 Admit it: the look on J.B. Shugarts's face after an especially egregious false start is still etched into your brain, and is the same look you give to family/friends/roommates after you clog the toilet. 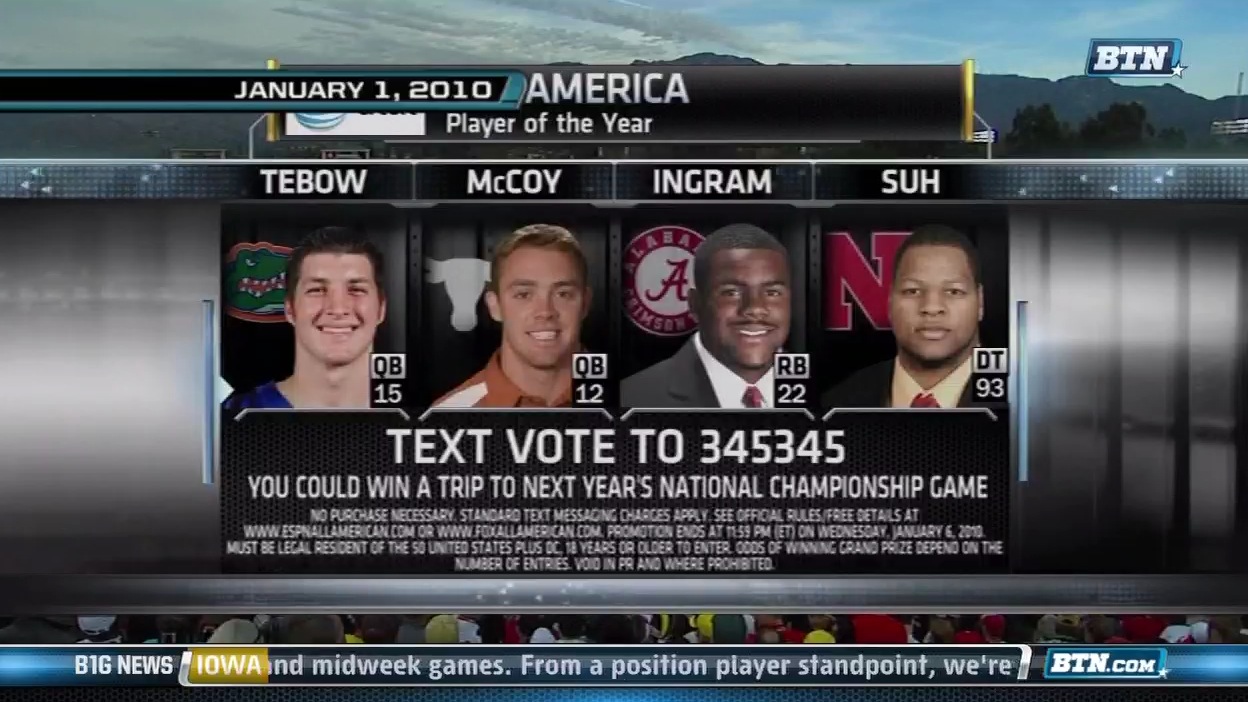 Future NFL backup, backup, 3.9 yards per attempt, SOCIOPATH - quite a precipitous decline for our 2009 AT&T Player of the Year candidates. 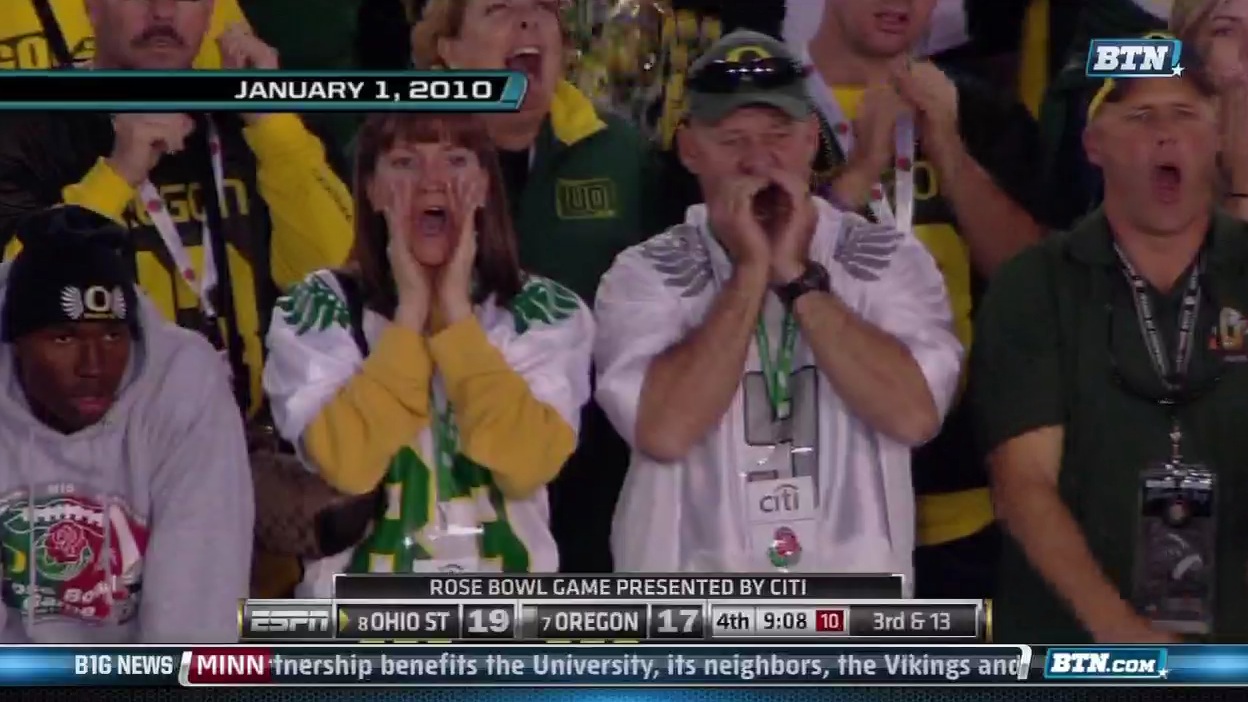 Little-known fact about Oregon fans: they do not cheer. They cup their hands to their mouths and perform the mating call of the duck, invigorating their players for quarters at a time. In a way, they are the Manolo to the Ducks' Dorothy Campbell. (We're talking about Eugene, Oregon here, so this type of behavior isn't weird at all.)

The immediate next play after those fans were shown? This:

By the way, following the DeVier Posey TD that ensued, Herbie goes, "Ladies and gentlemen who wanted to move Terrelle Pryor to receiver after the Purdue game, TAKE NOTE OF THAT THROW." Wait, there was a time when Buckeye Nation was seriously clamoring for Joe Bauserman to replace Terrelle Pryor? Someone needs to investigate this, because I for one refuse to believe it.

Team unity is so heartwarming. Land-Grant Holy Land sees you too, Smally!

OSU's kick coverage was absolutely dreadful in this game. In addition to this return, Kenjon Barner returned 2-3 kicks to midfield. Good thing Kerry Coombs wasn't the Buckeyes' special teams coordinator, or else he would've [redacted due to LGHL decency standards.] 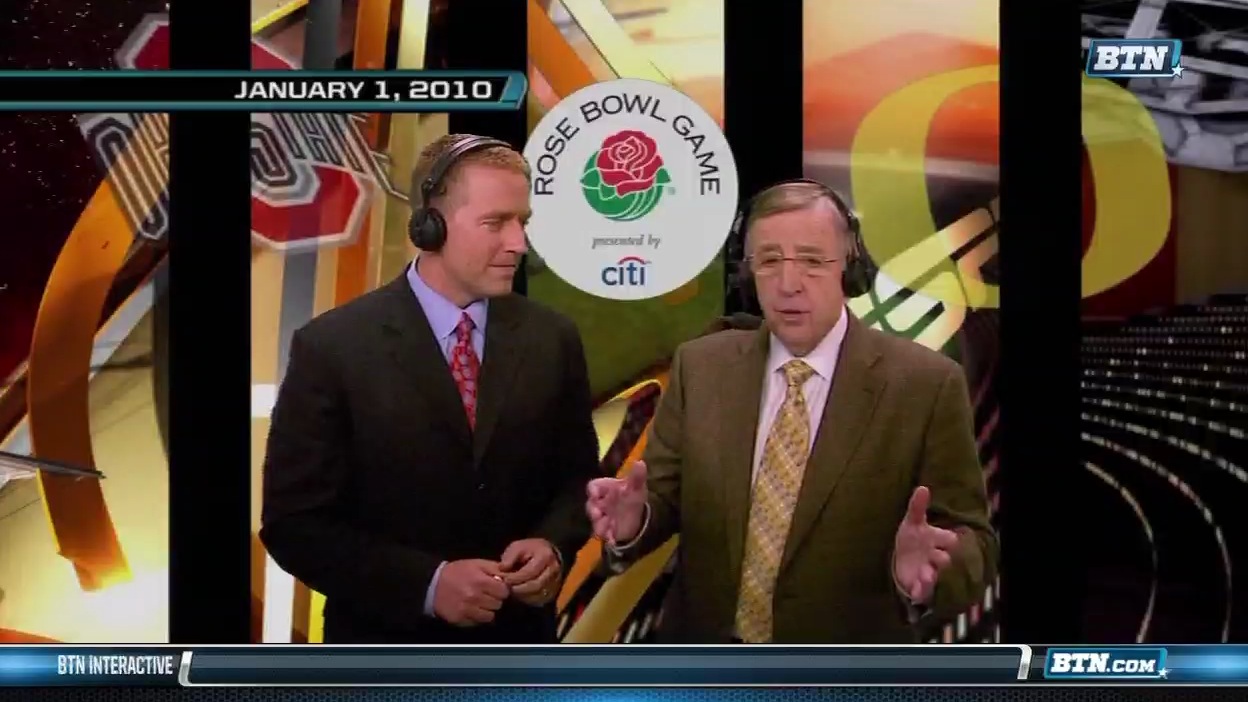 "This is a comfort zone for Jim Tressel. He's like a python, just slowly squeezing..." remarks Herbie.

We want a detailed list of every drug Kirk Herbstreit injected, ingested, or snorted during his trip to Pasadena, and yes, that includes the ones he bought from Musberger. 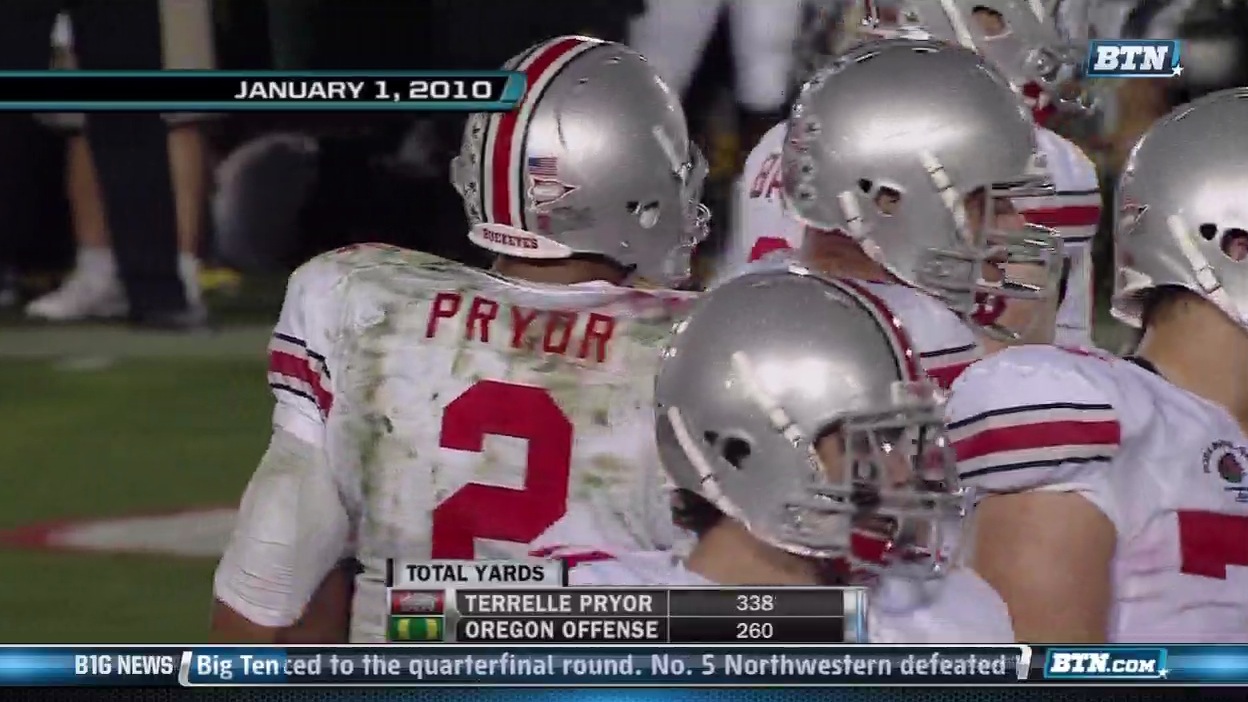 Yeah, that pretty much sums this one up. While a lot of folks tend to think about Pryor's Buckeye career through the lens of what could've been, it's time to start appreciating his actual accomplishments as a Buckeye, which were considerable.

See you next time on "Sideline Rewind"!