"Know Your Enemy" returns to preview Ohio State's season opener against the Buffalo Bulls of the MAC.

Share All sharing options for: Ohio State-Buffalo 2013: Know Your Enemy

We're 75 days until Ohio State kicks off a season with lofty, championship aspirations. Though the two months and change may feel like an eternity, it's time to start familiarizing ourselves with the Buckeyes' 2013 slate.

WARNING: You're going to hear a lot of talk about how paltry the Buckeyes' strength of schedule is between now and December 8th, when we learn OSU's post season fate officially. Set your expectations accordingly now so you're not prone to mental gymnastics should the Bucks find themselves in a precarious situation.

Regardless, all Ohio State can control at this point is winning the games in front of them. Where that leads them is up to the winds of the college football season (and to a lesser extent, the zeitgeist). And either way, there's no reason not to have an advance pulse on each and every opponent the Buckeyes face so you can impress that friend, family member, coworker, or person from Math 1151 by name checking just how good Khalil Mack really is (spoiler alert: he's a beast).

While it's college football preview magazine season and there are plenty of good ones out there worth having, there's no reason at all you can't get that primer that you need absolutely free. Accordingly, we're excited to welcome back a second season of our popular "Know Your Enemy" series.

This year we're upping the stakes by including a bit less wit (though there'll still be plenty) and a bit more of the sort of names-to-know preview-type information you crave. We'll still pay homage to this series' humble roots though by keeping it in a quasi-Q&A type format.

But before we get to the need to know, here's the nit and gritty:

Q: So what will the addition of E.J. Manuel mean to the Bills 2013 playoff chances?

The Western New York-based MAC East representatives are coming off a tough 4-8 (3-5 in conference play) season, but one that did show enough signs of life to get head coach Jeff Quinn a sizable contract extension. This understandably didn't exactly sit well with the folks who'd seen Turner Gill breathe life into one of FBS's perpetually worst off cellar dwellers and then fall to just nine wins in Quinn's first three seasons combined.

But in an era where coaches seldom get the opportunity to get all their own classes in and developed (see: Gill in his post UB move to Kansas) and rarely the opportunity to undergo any real growing pains, it was at least, kind of, sort of, refreshing...maybe?

The Bulls won't be world beaters and shouldn't pose any realistic threat to Ohio State, but they also are pretty far from being UMass, Akron, and Eastern Michigan in terms of the hard off MAC have nots. And it isn't hard to see them being better than Miami (OH), Central Michigan, and Western Michigan either.

August 31st also won't mark the Bulls' first trip to Columbus, for whatever that's worth. They faced Bowling Green in a late November neutral site game at Crew Stadium to cap last season in which they fell to the Falcons, 21-7.

A: Yes, that does remain a thing. Though there's no guarantees this actually comes to fruition – and both Buffalo locals and the school's alums might have something to say about dumping the 'Buffalo' part of the name – the school hasn't shied away from starting to, at the very least, rebrand themselves as a New York institution primarily to possibly get some juice from unacquainted recruiting targets.

Also, Duke great Bobby Hurley is the school's new head basketball coach so that right there is another reason to either hate or *really* hate them, depending on who you are.

At least as of now, there are no known gears in motion to add a state of New York emblem to the Bulls' football attire, but who knows. They are a Nike school and there is still plenty of time until kickoff.

Q: Any ties to Ohio State or maybe Urban Meyer?

A: Funny you should ask: 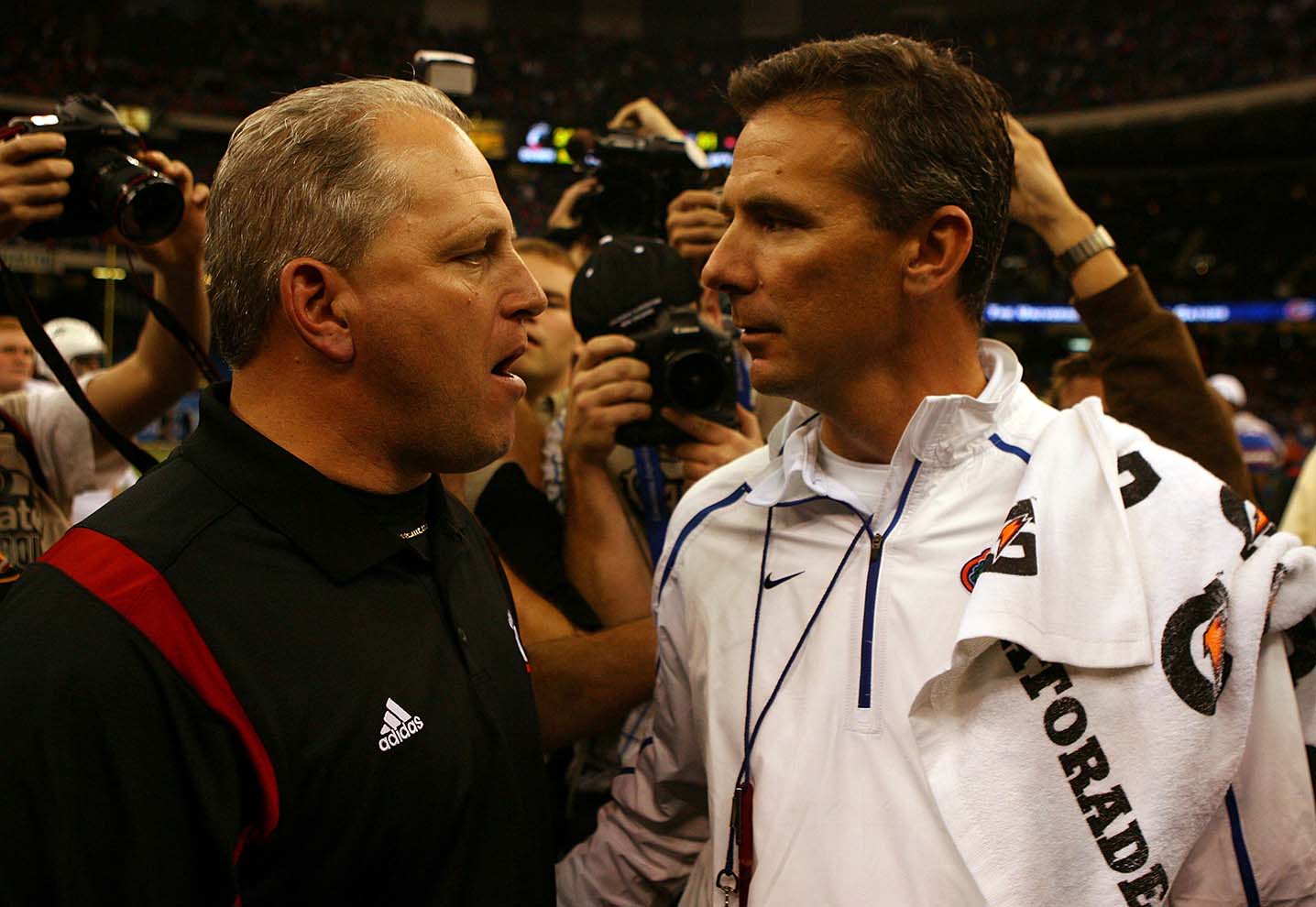 The previously touched on Jeff Quinn sort of looks like Hank from Breaking Bad but with hair there, no?

As interim head coach of the University of Cincinnati – Quinn was Brian Kelly's right hand man at UC, Central Michigan, *and* Grand Valley State, serving as Kelly's offensive coordinator for 18 years prior – Quinn took an unbeaten Bearcats team into the lion's den of SEC country to take on a rather malnourished looking Urban Meyer in what was at the time expected to be Meyer's final game as Florida's head coach. Of course he went on to unretire a short time later, but that Sugar Bowl remained functionally a tortoise-with-a-head-on-it bomb for the Bearcats anyways.

Florida led at the half (more like 'laughtime', amirite), 30-3. Tim Tebow had the best bowl game of his career, throwing for a BCS record 482 passing yards and finishing with another BCS record 533 total yards. The final score was a less close than it looked, 51-24. 21 of Cincinnati's points came in all intents and purposes garbage time. I think it's safe to say Meyer is comfortably 1-0 against Quinn, head-to-head.

That's about it though, as the only other even tangential tie between Meyer and Quinn is Meyer's former offensive line coach (and then later offensive coordinator and assistant head coach) Steve Addazio's Temple Owls taking it to Quinn's second UB team, 34-0. Urban Meyer and his coaching tree have not been particularly kind to Jeff Quinn as a head coach.

Q: Give me some superfluous facts I wouldn't know otherwise about UB.

A: The school originally opened as a private college but was folded into the SUNY system in the early 1960's. Though my personal knowledge of Buffalo the city is limited to our own Brett Ludwcizak bragging about the quality of the wings and that one Goo Goo Dolls song proclaiming its downtown home all but exclusively to sad blue collar types, the university itself is actually evidently less depressing. They're not just the largest public university in the Northeastern United States at over 28,000 enrolled, but they're one of just two schools in the SUNY system to have both a dental school and a medical school.

In terms of famous alums, former president Millard Fillmore was the school's first chancellor, astronaut Ellen S. Baker graduated from there (which omits them from being made fun of by Michigan), Wolf Blitzer of CNN fame, Terry Gross, the host and producer of NPR's Fresh Air, noted mainstream indie film producer Harvey Weinstein, and jazz great Charles Mingus are also all alumni.

The Packers' James Starks is arguably the school's most noteworthy current professional athlete.

Also, um, evidently the school has no reservations about putting this on the website marketing them to prospective students: 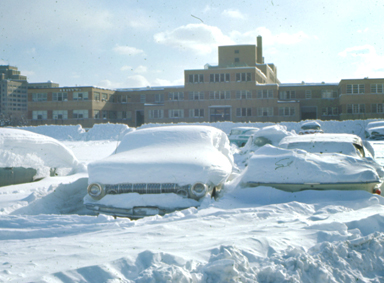 A: They've got a wide delta, but most well versed in all things UB tend to think Jeff Quinn's extension is a direct result of the team's ceiling this year, which could stretch as high as 6-6 or 7-5. SB Nation's Buffalo blog, Bull Run, states that anything worse than 6-6 would be a failure in their eyes. A bowl berth would be beyond huge, not just for Quinn's ability to recruit for the program, but closer to home, in terms of aiding an Ohio State strength of schedule which as mentioned could desperately use the boost.

Quarterback remains a somewhat contentious situation for the Bulls, after mostly starter Alex Zordich was sidelined with injury (his play was take it or leave it before going down) in late 2012 and was replaced by then frosh Joe Licata. It's tough to say who'll claim the starting nod, with some thinking Zordich returns to the role he vacated, while others insist Licata ultimately Wally Pipp's him.

In terms of offensive productivity though, senior running back Branden Oliver is as good as they come. Oliver might just play his way into being mentioned in the same light that Starks once was held in when he was All-MAC for the Bulls. Georgia coach Mark Richt spoke highly of Oliver after he rushed for 111 yards in a 45-23 UGA win over the Bulls in both teams' 2012 season opener. Buffalo actually hung around for a bit in that one and either forced or aided the Bulldogs' descent into some rather sloppy play.

As alluded to defensively, the Bulls pretty much begin and end with Khalil Mack. The senior outside linebacker was focused on and game planned for for pretty much the entirety of 2012, and yet he still finished with 8.0 sacks and 21.0 tackles for a loss. Despite having been a 2-star, Mack could play for anyone on Ohio State's 2012 schedule.

Q: What are the keys to this one?

A: It would take an army of Khalil Mack's for Buffalo to slow Ohio State's offense, but they will have the added edge of potentially catching the Buckeyes with a few natural butterflies and jitters with this being the season opener and all. Braxton Miller's the consummate pro at this point though, and given the talent differential, it's pretty safe to assume the bevy of new weapons (hello, Jalin Marshall, Dontre Wilson, Ezekiel Elliott, Corey Smith, James, Clark, and Marcus Baugh) will all get a chance to announce their presence to the college football viewing world at some point in this one.

Almost regardless of how on UB is, it probably won't matter

The Buckeyes will also get to practice shifting tempo, substitutions on the fly, and the sort of feel/rhythm based elements of their offense which are often hard to simulate in a practice environment. Jordan Hall should get every opportunity to prove he's back on solid ground after injuries forced him into a medical redshirt situation last year. And the Buckeyes' deep stable of running backs (think Rod Smith, Bri'onte Dunn, and Warren Ball) should all get adequate repetitions, even though the Bulls have aren't expected to start a single underclassmen on D.

Perhaps lost in all of this is how Buffalo's spread offense matches up against Ohio State's D. The Buckeyes will be working in a lot of new faces defensively, but the talent baseline should be good as ever. UB was far too inconsistent in terms of passing efficiency in 2012, but over reliance on the downhill running game could end painfully for them.

If they do elect to make death by a thousand cuts their m.o., look for Curtis Grant (and possibly Mike Mitchell and/or Trey Johnson) to pad their tackle numbers. And if they try to test Ohio State's rather stout secondary, well, likely first year starter Doran Grant could use a little confidence, too.

After the Michigan game, it's easy to forget how paltry the Buckeyes' D was the vast majority of 2012. This group almost can't possibly start any worse, and almost regardless of how on UB is that first Saturday, it probably won't matter.

Q: So it sounds like Ohio State is going to win, yes?