NFTC and Elite 11 Columbus: What we learned

A busy to the brim two days of premiere recruiting camps in Columbus has come to a head. See the takeaways from the weekend that was.

Share All sharing options for: NFTC and Elite 11 Columbus: What we learned

Nike's Football Training Camp, Columbus edition is a wrap and following yesterday's Elite 11 Super Regional, a busy weekend on the football recruiting scene has come and gone. SB Nation Recruiting's Bud Elliott as well as SB Nation's Mark Ennis were on the scene, and in addition to their reports, the Elite 11 portion was streamed for the first time ever.

While the broadcast had some technical difficulties about two thirds of the way into it (and without the high budget production values of the likes of the ESPN family of networks or the Big Ten Network it was difficult sometimes to do anything resembling fair or comprehensive evaluation), were not without takeaways from a jam-packed weekend of talent evaluation.

Barker capped a strong showing at yesterday's Elite 11 by putting on a performance that earned him an invitation to Nike's The Opening in Beaverton July 3. He also got the news he'd anxiously been awaiting when he received the long-coveted invite to the 2013 Elite 11 Finals. Barker will go toe-to-toe with the best of his 2014 classmates in an effort to be named one of the top 11 quarterbacks in the country as well as win the individual outright crown.

"It was really cool to have the chance to compete against the best guys from around the country. Guys you only really ever see on the internet or on Twitter," Barker told SB Nation. "It was cool to get a chance to see where you stand and how you stack up. I just love competing."

Multiple analysts singled out Hurd for standing out amongst his peers. Given his pedigree, his Golden Ticket to The Opening 2013 is no surprise. At 6-3, 230 and with the sort of athletic ability Hurd possesses, you'd almost expect to see Hurd at linebacker given his frame. It should be interesting to see how his game translates to the 7-on-7 environment that camp will necessitate.

What is Montae Nicholson remains the questions for many of the major players in the mix for the 4-star Composite safety/corner/wide out. While he showcased his ability to run routes and catch the ball on Sunday, different schools project him to different end positions. Numerous experts singled Nicholson out for his rising to the top of the wide receivers on hand, while he also drew praise for his shutdown abilities as a defensive back Sunday. It's particularly impressive he was as on top of his game after having just transitioned from his track season ending recently.

Curiously, though Ohio State has offered, he doesn't appear to be towards the top of their board or a priority for the staff at the present moment.

Patterson showed his bonafides amidst a talented group and came somewhat out of nowhere to really make a name for himself at the Columbus camp. The Marion-Franklin product from C-bus's south side has interest from a lot of Big Ten schools, but not a lot of offers to show for it – yet. That may be changing if he continues to put on showcases at various camps throughout the summer the way he did Sunday.

Another prospective future Volunteer who made a name for himself Sunday, Henderson was the talk of the defensive linemen. The potential hybrid end/linebacker from Shaker Heights will likely need to bulk up under a college strength and conditioning program to make the kind of desired impact he's flashed potential of, but if Butch Jones keep landing talents like these, it's only a matter of time before Tennessee's back for real.

Given what we've seen of Kyle Berger in both highlight tapes and word of mouth, it's no surprise that he stood out amongst the linebackers at Sunday's camp. Urban Meyer, Luke Fickell, and Mark Pantoni don't mess around when it comes to evaluating elite caliber linebackers.

The Cass Tech, Michigan spiritual leader of the class of 2014 continues to do what he's done since he gave his relatively early verbal commitment to the Buckeyes: show exactly why he's so highly touted in recruiting circles. SB Nation Recruiting's Bud Elliott singled out Webb's endurance, physicality, agility, and overall speed as he made play after play on Sunday. Against the likes of Dontre Wilson, Jalin Marshall, and James Clark (as well as 2014 pledge Lonnie Johnson) in practice, Webb is just going to get better and better from the moment he steps on campus.

In the athleticism assessment test that incoming Ohio State linebacker Mike Mitchell thrived in last summer, Massillon Washington's Beau Huffman earned top billing at the Columbus edition of the NFTC. Though his size at 6'2, 200 doesn't scream major program talent, it only takes outstanding camp showing at to upgrade his offers from MAC caliber to Big Ten/ACC level.

Amongst those sans the nods as of yet, SBN Recruiting's Bud Elliott also singled out Ohio State commits LB Dante Booker and OL Kyle Trout for their strong play on Sunday.

From an Elite 11 vantage, we're now at 16 quarterbacks (out of a total of 18) who'll go toe-to-toe for the honor of being the class of 2014's top quarterbacks. Besides Barker as previously mentioned, the primarily service academy recruited Luke Rubenzer (Scottsdale, AZ) got an invite just after 2 a.m. Sunday morning.

From the sounds of it, Kizer's invite came as a big of a surprise. While there's no questioning Kizer's upside, there's a wide delta of opinions on his tape, and he was also inconsistent (even by his own admission) during Saturday's competition. Elite 11 coach Trent Dilfer spoke of Kizer bouncing back from a tough go at it to close strong, which perhaps played into the group's decision, but some speculation centered around the E11 principle talent evaluators simply falling in love with Kizer's tape. While Ohio State's finally checked out Kizer in person as of several weeks ago, they (along with Notre Dame most notably) have still yet to offer the Toledo Central Catholic signal caller many feel is destined to wind up in the SEC.

Even more curiously, you couldn't find anyone Saturday with a bad opinion of Ohio State offerree Brandon Harris. And yet here we are, Sunday, still not knowing whether Harris will make the cut for one of the final two invitations to the Elite 11 Finals. Harris left his unofficial visit to Columbus with a good taste about the Ohio State campus in his mouth, but I'm sure would love to know sooner rather than later if he'll get the recognition he's worked hard to earn.

We *do* know that Harris' candidacy is still very much alive and well. Though you can scratch Rubenzer, Barker, Kaaya, and Wilkins off the list, the remaining two will come from these 13 names: 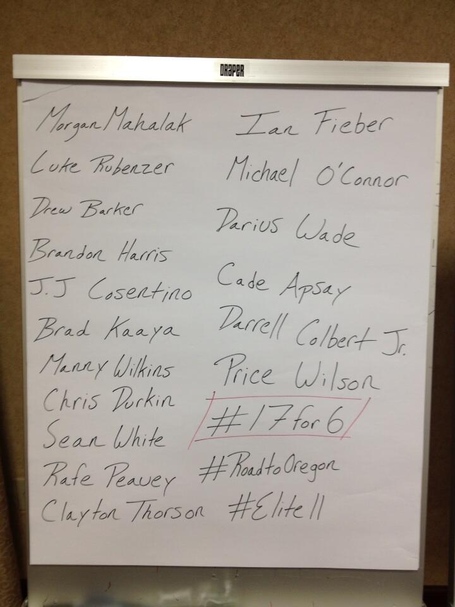 As SB Nation's Bud Elliott also said Sunday, we're at the point of the recruiting cycle where the recruiting dominoes start to fall. Once Kyle Allen and fellow Elite 11-er, Alabama/Auburn target David Cornwell (Norman, OK) make their decisions, a number of top programs will move to #2 on their boards, and from there even more will move on to their #3's. Could that possibly include Harris landing in Columbus, or if that fails, perhaps an offer going out to the likes of DeShon Kizer? All we can do at this point is wait and see.