Jim Tressel always said the punt was the most important play of the game. He wasn't wrong. Now, Urban Meyer is turning to a former player of his to make his special teams that much more special.

Mike McCabe isn't a name that gets thrown out a lot in terms of former collegiate star football players; there's no national award named after him, he's not a normal guest analyst on ESPN. He didn't even go to an FBS school. But to those that do know his name, McCabe is a critical cog in turning out a championship football team.

McCabe is not on any coaching staff, though – far from it. He works with staffs all over the country, and with football players from every division. But he doesn't work with quarterbacks, wideouts, running backs, linebackers or defensive backs. McCabe teaches the positions that he knows better than most, a position that one former Ohio State Buckeyes head coach thought was more important than almost any other.

Mike McCabe teaches kicking. And there are few out there that teach it better than he.

McCabe was raised in Southwest Ohio, in the shadow of Miami University. He was a kicker in his prep days and tried to parlay that ability into a scholarship offer at a higher tier college. But when his hometown RedHawks didn't offer him a scholarship to kick in Yager Stadium, McCabe chose to fly in a different flock, deciding to kick for the Illinois State Redbirds. It was there that he met one of the bigger influences in his life, and in what would become his business once his playing days were done: Urban Meyer.

Meyer, after his stint at Ohio State as a TE and WR coach, headed to a more influential role for the Redbirds, and their new kicker Mike McCabe. Learning under Meyer, McCabe didn't just prove the the Miami University coaching and recruiting staff wrong, but most of the national as well. He would become a four-year letterman for the Redbirds and go on to lead the nation in punting, while setting several school and conference records for Division 1-AA Illinois State.

After a career-ending injury took him out of actively playing the game, McCabe turned to something where he would be arguably more successful: coaching young kickers. Using his experience kicking under Urban Meyer, McCabe would go on to found One on One Kicking, an elite, national camp for prep kickers, with a focus on turning high school specialists into "must-haves" for recruiting coordinators in every division and in every conference. McCabe's success rate is impressive; 98% of his year round training program kickers are offered scholarships. More impressive, however, is the list of former pupils he has coached:

The list goes on and on and on. McCabe truly has a vision for what makes a college kicker great, in an age where #collegekickers typically has a negative connotation on Saturdays in the fall. This year, one of his best prospects is Richie Leone of the Houston Cougars, a two-time Ray Guy semifinalist and 2012 first team All-Conference USA. Leone should be on stage with the rest of the national award winners in December, if McCabe has anything to say about it.

This summer, with Meyer gearing up for his second season as Ohio State's head football coach, one of the biggest questions going into the new season involves the kicking and punting game. While Drew Basil was certainly very good with his PATs last year (he hit at better than a 98% clip), he was used sparingly for field goals, and only hit eight of his 11 tries. The punting game was much worse, ranking 55th in total punts, 100th in average distance, and a paltry 109th in net punt yards for the 2012 season. Clearly, McCabe's tutelage will be appreciated in Columbus, just as it is wherever McCabe coaches weak, prep legs into college- and NFL-ready howitzers.

LGHL had the chance to speak to McCabe about what makes a truly great kicker, and about his coaching philosophy.

What is the hardest part of transitioning a player like [new Buckeye committ] Sean Nuernberger from being a prep kicker, to kicking in front of 103,000 people like he will at Ohio State?

Complete pressure and non-stop training. We train our athletes in muscle memory and that's why we have three Ray Guy Award winners and four Lou Groza Award winners, and that's because they train with us. In the summer, we put that intensity of those last four-second kicks to win the game mentality on them. We use fog horns, we throw water at them, we throw bags in front of them. If you're focusing on the ball and blocking everything else out, you're going to have a great career.

What are the benefits and downfalls of having a kicking specialist go from doing all the kicking in HS to only one discipline (punter or placekicker) in college?

We want to give our athletes that mental edge -Mike McCabe

What makes kicking in college (and in general) so difficult, and why do we see so many college kickers miss short field goals and points after at this level, especially in the last few years?

I think kicking is even more important now. These coaches realize that these specialists are that important because the abilities of other offensive and defensive players are top notch, almost at an NFL capability when in college. Your kicker has to be on key to win those games, and that comes down to training. Our training is all about pressure, muscle memory and making sure the kicker doesn't over-kick. We keep them fresh.

What are the most important aspects of your training process, and why has it been so successful?

Weight training and speed training is essential; to have that quick torque in your leg, strong hips, strong upper body and torso, especially core development. We put guys in situations with an eight foot net about six yards ahead of them to create the height aspect of a defensive player with a 46" vertical leap. We create chaos for the kicker during their training, so that when they do get in the game, they're ready to go.

How did you benefit under Urban Meyer's coaching at Illinois State, and what tactics of his do you routinely use? 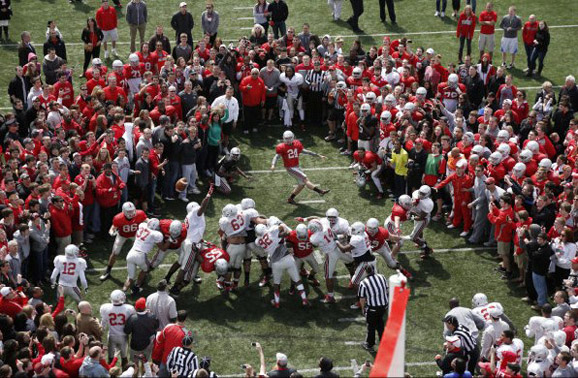 Meyer always used something called the "Pressure Cooker" and that's where all these players stand around you and scream at you and create chaos. The whole team, and this is back in the day now, is going to be running if you don't hit a perfect punt. And knowing that, [the kicker] can't worry about that, they have to focus on the job. Something Meyer's still doing. If you have 15 seconds at the end of the half or to win a ballgame, that's what's going to do it.

What specific traits do you look for in a prep kicker that would ease the transition to the college level?

Academics are obviously the first thing, but after that, one of the things we look at is the mental aspect of the kid. If you get a young man that's not willing to learn from anybody, I don't care who the coach is, if they won't pick up some aspects that will help their game, or they come in too overconfident or cocky, that shows me weakness. And that can be a huge downfall. If they get too complacent or too comfortable in what they're doing they won't be willing to change anything, and then you will have problems. If [one of our camp attendees] won't listen and it happens over a period of time, its 'have a nice day!'

Special thanks again to Coach McCabe for his time.