With the spread offense being more prevalent across the country, defensive coordinators needed an answer to that high powered offense – and they might just have found it with the 3-3-5 stack.

When playing against teams that run the spread offense this fall, we may be seeing the Buckeye defense line up in a non-traditional (at least amongst OSU faithful) set. The 3-3-5 stack, or what others call the "30 stack", was advanced by Charlie Strong in the early 2000's as a way to counter the spread offense. It has since been used as a base defense by a couple of teams, including West Virginia, New Mexico, San Diego State, and the University of Arizona. Alabama Head Coach Nick Saban also has employed the 30 stack against spread offenses and specifically against Coach Urban Meyer's high powered Florida teams in the late 2000's. In an article in the Columbus Dispatch, Urban Meyer stressed the constant change that his offense and defense must go through, ending it saying, "that's why we are playing with that triple stack stuff".

Coach Rocky Long, formerly of New Mexico and now with San Diego State University (who the Buckeyes play this season) were one of only two teams to defeat Coach Meyer at Utah in his only two seasons as head coach for the Utes. Coach Long ran the 3-3-5 stack against the Utes to perfection that afternoon, and in that same article by Tim May, Meyer stated that they "confused the hell out of us". Word spread like wild fire around college football and coaches began to copy Coach Long's 30 stack defensive blueprint against Meyer's offense and a number have used it since, including Coach Saban.

The 3-3-5 stack is exactly how it sounds, with three down linemen, three linebackers stacked behind the defensive linemen and five defensive backs beyond that. The three safeties and two cornerbacks allow the defense to have flexibility versus a three or four wide receiver set. Flexibility with personnel is one of the greater strengths of this particular defense. In the Buckeyes base 4-3 defense, a defensive lineman will be taken off of the field, which would make the defense susceptible against the run. But in return, speed will be added to the overall D and with the defensive back talent that the Buckeyes have, it seems like a great wrinkle/alternative look.

Another positive regarding the 30 stack are the various blitz packages that can be run out of it. With more speed on the field and more players standing up, this allows a variety of safety and cornerback blitzes. The 3-3-5 stack also allows the defense to easily switch back to a 3-4 or 4-3 with the same personal on the field. For instance, the Buckeyes can come out in a 3-4 or 4-3 and switch to the 3-3-5 stack before the snap. 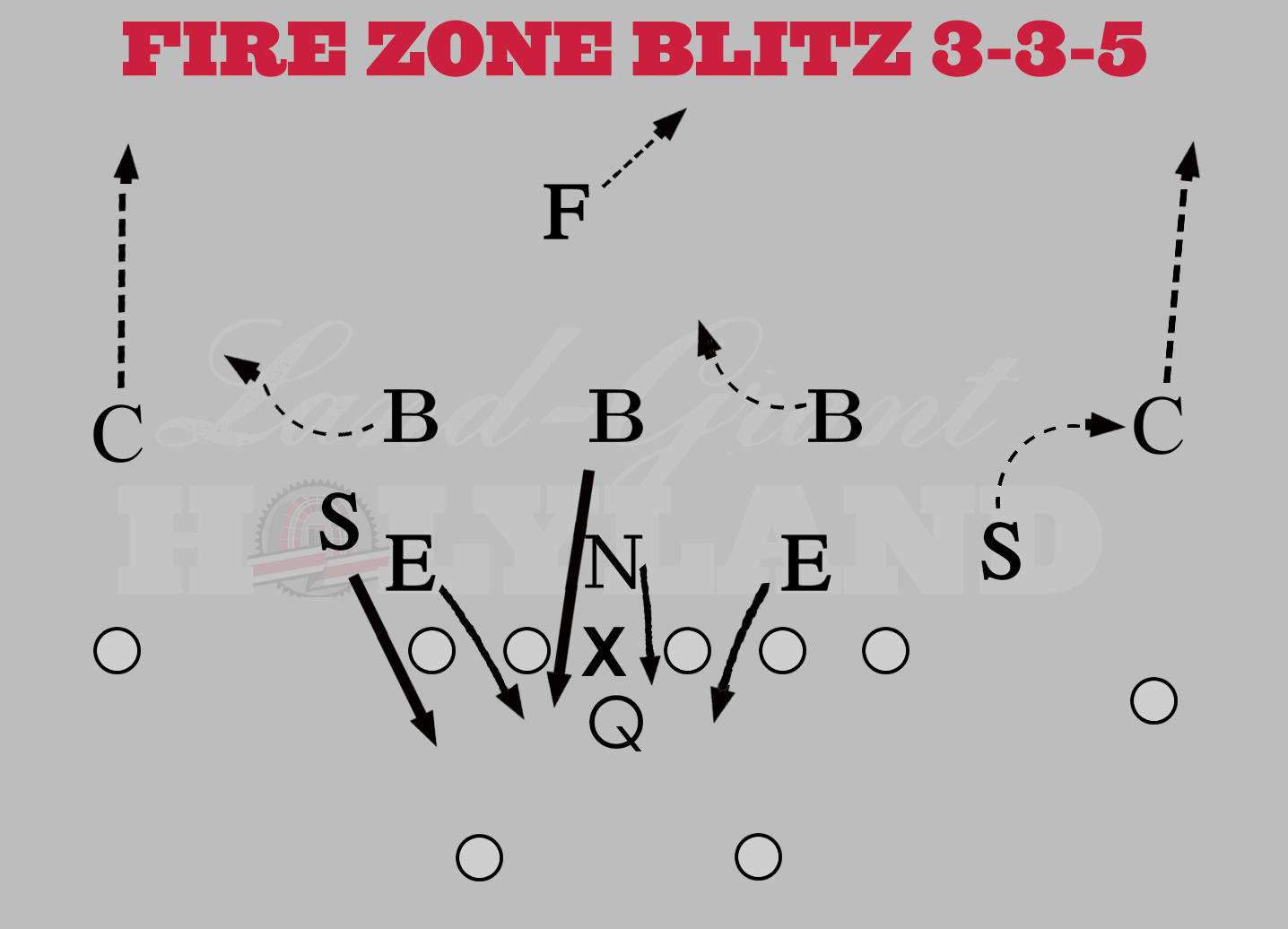 The key to the 30 stack is to have two big, strong and athletic safeties that are known as the spur and the bandit. The two strong safeties in this defense need to be jack of all trades; they need to be able to drop back in pass coverage, blitz the quarterback as well as be able to play in the box for run support. The spur needs to be stronger than the bandit, as he will line up on the strong side and be more of a linebacker/safety hybrid. This is the type of athlete that is rare at the collegiate level, someone who is able-bodied enough to keep up with an athletic tight end but also big enough to take on blockers and be key in limiting the opposing team's run game. The bandit on the other hand is more of a hybrid safety/ nickleback that quarterbacks the defensive backfield. Look for Christian Bryant to play the bandit role and Tyvis Powell or one of the incoming freshman to take over at the spur position. The free safety (C.J. Barnett) will play centerfield in pass coverage and have his usual run/pass responsibilities. 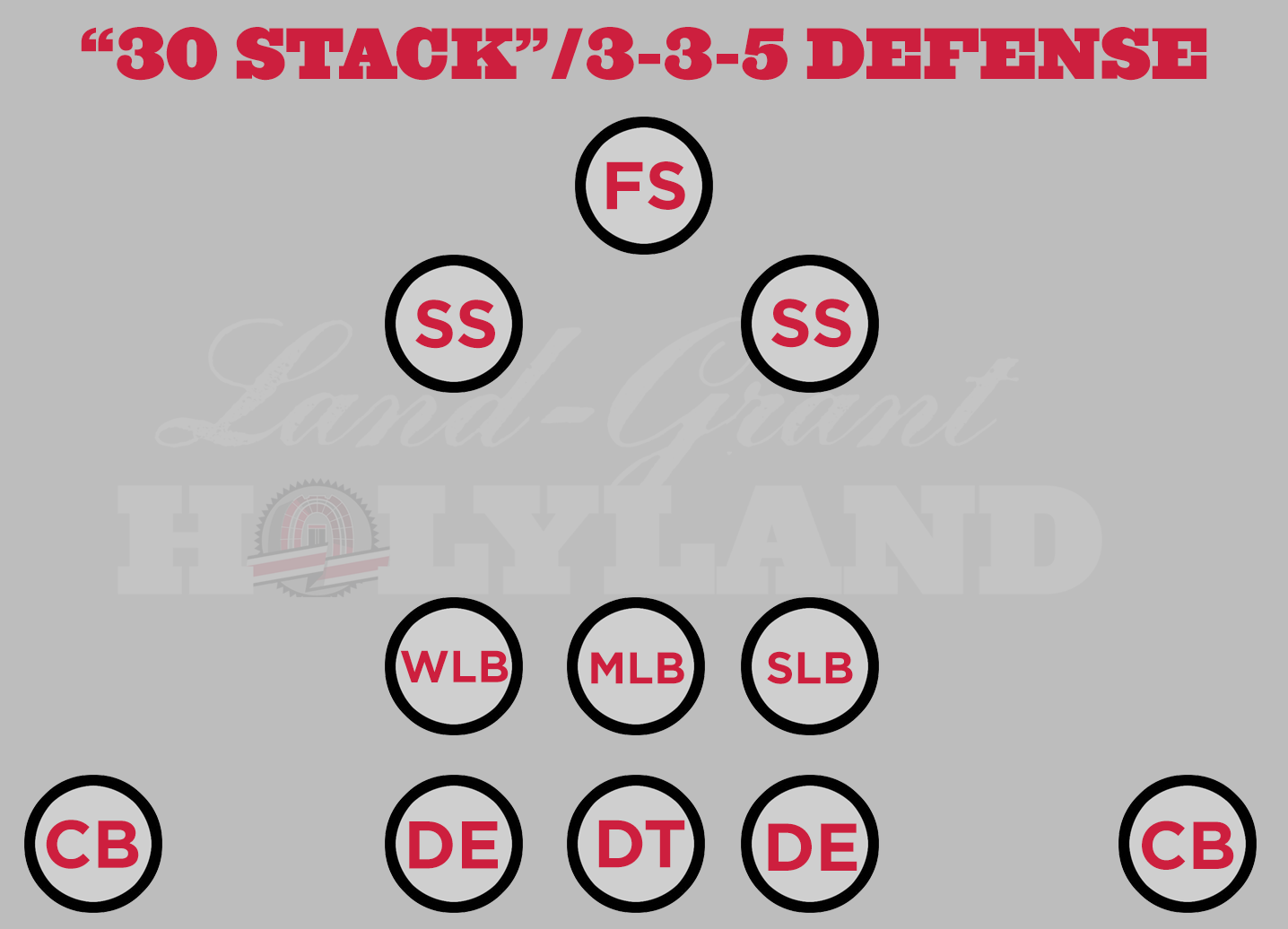 Regarding the cornerback play, Bradley Roby played boundary corner last year as he is excellent in run support, while Travis Howard manned the field corner position. It will be interesting to see if Doran Grant can play the field corner or if they have to move Bradley over to the other side. If Grant is a sure tackler, I think that will allow the coaching staff to transition Roby over to the field position. If Grant does not win the starting job, it will be Armani Reeves, Najee Murray, or one of the incoming freshmen most likely playing the boundary.

As for the three linebackers in the 30 stack, they play similar to the Buckeyes base 4-3. Because the 3-3-5 will most likely be used against the spread or on passing downs, the most athletic linebackers should be on the field. Ryan Shazier will be on the weakside (Will), while the other two positions (Mike and Sam) will be wildcards. Incoming freshman Mike Mitchell could be a candidate for the other outside linebacker position in the 30 stack due to his lethal combination of size, speed and athleticism. The biggest question will be at middle linebacker (Mike) as Curtis Grant has the measurables to succeed in the 3-3-5 stack but he needs to prove he can apply the off-the-field film room/mental aspects of the defense to maximize his opportunities.

On the defensive line in the 3-3-5, the nose tackle must be an immovable force in the middle, commanding double teams and wreaking havoc in the running game. The NT lines up directly across from the center and must control the A/ B gaps. Both the read option and power running plays out of the spread are very common, so one could argue that the NT is the most important position in the box. Also, most passes in the spread offense are thrown relatively quickly (screens, slants etc.), so the defensive line needs to get in the passing lanes and pressure the quarterback. Tommy Schutt or Chris Carter will most likely rotate in at NT, considering they are the biggest players on the Buckeye defensive line. The ends (Adolphus Washington and Noah Spence) line up just outside the offensive tackles and must provide a pass rush and have option/running game responsibilities.

Some fans may see the teams that run the 3-3-5 stack as a base defense (see: Rich Rodriguez teams) and think that it is not an efficient defense. The Buckeyes will still run their base 4-3 defense but if they add the 30 stack as a way to mix things up, it could work wonders for them. Multiple looks will also necessitate the opposing offensive coaches and quarterbacks spend a few more hours preparing in the film room, which is never a bad thing for your defense. With more four and five-star athletes recruited on defense to play the important spur and bandit roles, the 30 stack could become more and more commonplace at Ohio State. But first, this fall, we'll see if it proves effective as the Buckeyes seek perfection once again.