The Big Ten's top scorer is NBA bound and Ohio State has a Buckeye drafted for the seventh straight year.

With the 58th overall pick pick in the 2013 NBA Draft, the San Antonio Spurs selected Ohio State forward Deshaun Thomas. Thomas is the No. 37 player in the draft rankings from SB Nation's Jonathan Tjarks and the sixth-ranked short forward. 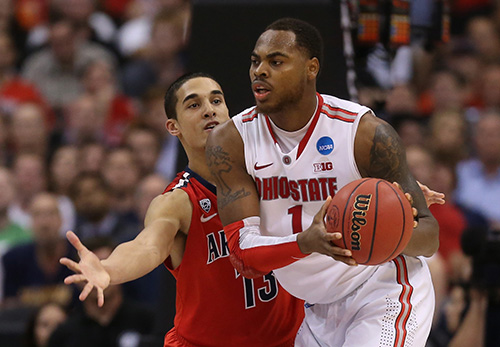 "The guy can catch and shoot very well, is a solid free throw shooter, and can even efficiently finish near the paint despite not being a huge guy. That sort of offensive skill set could work out well as a complementary bench player, a situation perhaps more akin to the Buckeyes during Thomas' first two OSU seasons."- LGHL's Matt Brown

At 6'7" and 230 pounds with a 6'10" wingspan, Thomas is somewhat undersized for the combo forward position. He'll need to be hidden defensively, but his potential as a scorer should get him a shot at the next level. Thomas has great range on his jumper and he doesn't need much space to get it off. If he's crowded by a slower player, he can put the ball on the floor. He's a pure scorer who can explode quickly. At the very least, you don't have to worry about him getting his shots up.

The big concern at the next level is how he'll do against some of the longer and more athletic defensive players at his position. It will be hard for him to impact the game much beyond scoring.

Either way, he should be a useful second-unit weapon in the right situation.

In a scouting report on Silver Screen and Roll, the following was said about Thomas:

Only [Illinois' Brandon] Paul and Penn State's D.J. Newbill had a higher usage rate in Big Ten ball than Thomas and he still maintained a solid efficiency with a 55.1 TS%. This is largely due to his ability to score the ball in a myriad of ways, from catch-and-shoot opportunities to putting the ball on the floor and scoring in the post. Whatever role Ohio State needed him to fill on offense, he did so and for the most part, with success. The issue in seeing how this works on the next level is that Thomas' athleticism is lackluster and he didn't exactly play above the rim, an issue in a league that has gotten increasingly athletic on the interior.

Thomas is a work in progress and will likely never be a star at the NBA level. Best case scenario, DT grows into a Robert Horry type. Worst case? He's over hitting 20 mid-range jumpers a game abroad in 3-4 years. If I was running an NBA team, I'd wager somewhere far closer to the former given his all world knack for scoring the ball, work ethic, and character.

The SB Nation NBA team contributed to this report.