EA put a ton of effort into making this year's football game even more realistic than before, with a special emphasis on the run game. How did they do, and does it show us anything about Ohio State's real life running game?

Our friends at EA have put a lot of effort into making this year's offering of NCAA Football their most realistic yet, from adding neutral site games, to adding additional details to the pregame show and stadium details, to a mostly very credible representation of player and team abilities (with a few glaring exceptions. I'm looking at YOU Kansas, and your traveshammockery that is your 79 overall ranking. 79 out of 500 maybe).

Perhaps their biggest adjustment, to the relief of fans of the franchise everywhere, has been the revitalization of the running game, and especially, the option. I've been playing the game fairly regularly since 2004 or so, and I have found memories of unleashing unholy hell on my dormmates with my unrelenting option attack, but by the time the series jumped to the next generation systems like the 360 and PS3, tweaks in the system had made running the option almost impossible. Now, there is nothing wrong with running an Air Raid like system and just throwing the ball every single time, but we can't all be Mike Leech, and the read option, triple option and flexbone are just as much a part of college football as marching bands, tailgating, and obnoxious, repetitive announcers. It's great to have those plays working well in the game.

I imagine I'm not alone in having spent the last few days playing around with the new game with the Ohio State roster. One of the major offseason stories has been whether the Buckeyes will be able to continue to grow their passing attack, either from the continued development of Braxton Miller as a passer, or perhaps from the addition of new toys to the passing game, like Jalin Marshall or James Clark. The real heft behind last year's Buckeye attack came from the running game though, and if this year's squad mirrors the game at all, it should be formidable again this year.

In case you missed it before, here is what NCAA 14 gives the Buckeye rushing crew in terms of ratings. If you want to see ratings for the whole roster, we've got you covered. 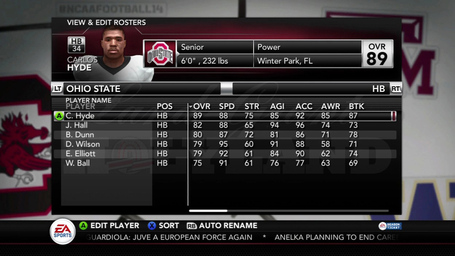 Carlos Hyde is the lead back, checking in at an impressive 89 overall, followed by Jordan Hall, Bri'onte Dunn, Dontre Wilson, Ezekiel Elliott and Warren Ball. Rod Smith, in case you were wondering, has been put in the game as a fullback, 74 overall (but he does have an 87 speed ranking).

Are these rating accurate? I won't dispute an overall high ranking for Carlos Hyde, but I suspect that an 88 speed rankings might be a teensy bit generous (and a 75 in strength is probably a little low). Hyde is certainly fast in real life, but in the game, it's a little too easy for him to just throw on the burners and lose people, especially with some of the physics tweaks they've made.

Below Hyde, I can't help but feel that many contributors are a little underrated. Jordan Hall may have been beset by injury, but it's a little harder for me to think that he should have the same speed rating as Hyde. His high agility rating is fair, but given the way the game plays, that shiftiness will probably be utilized far better in real life than on your 360, (although it is also certainly possible that I just suck).

It's hard to really have a strong option on the video game ratings for two freshman that have never played an NCAA snap, although Wilson's 95 speed rating makes him an exceptional threat in space, either as a screen pass recipient, or a partner in running the option with Braxton Miller. Warren Ball brings up the rear with a 75 overall ranking, and he probably won't see much time in your NCAA dynasty mode unless you specifically bring him in during a massive blowout. However, Ball by all accounts had a solid spring, and given the unpredictable nature of running back health, it wouldn't be unheard of for him to be a contributor this season in real life.

So what does all this mean? Well, it means if you like running the ball in NCAA 14, and you like the Buckeyes, you're going to have a bevy of options to use to attack a defense, and that's to say nothing of how you can work Rod Smith into the rotation, (somebody who will surely get carries this year), and of course, Ohio State's single most explosive rushing threat, Braxton Miller. If you want to pound Hyde up the gut, you still can. If you want to spread the defense out and find ways to Wilson into space, you can do that too. If you want to utilize the games impressive new downfield blocking schemes and have Miller wreck havoc play after play once he gets into the secondary, you can do that too.

In fact, I highly recommend it. Once you figure out how to make reads running the option, Miller is a teensy bit unstoppable. While I don't mind letting you guys know that I could ruin a lot of people's day on the PS2 versions of the game, I also don't mind letting you know now that I have a wife, a grown-up job, church responsibilities and this website, my video game skill has gone down DRAMATICALLY. Even with my lagging skills, I found it wasn't too hard to do some serious damage on the ground with OSU's running game options, although you may want to tweak the playbook for optimal results.

But at the end of the day, it's just a video game, and with enough skill, you could probably take Kansas with an Air Raid playbook and find ways to be effective on the ground (and if you are, please email your strategies to the Kansas coaching staff). While EA may have underrated the unit a tad, on paper, the Ohio State running back corps should be one of the deepest in the Big Ten, if not the country. Ohio State should have a more exciting and consistent passing game, but to be successful, they'll also need to run the ball well, and it appears they have the players they need to run up the gut, around the gut, or by breaking everybody's ankles in the gut (surprise! I didn't get into medical school).

What do you think? Are these ratings fair? Have you had success running the ball in NCAA 14 yet? What do you expect from the Buckeyes on the ground this season?